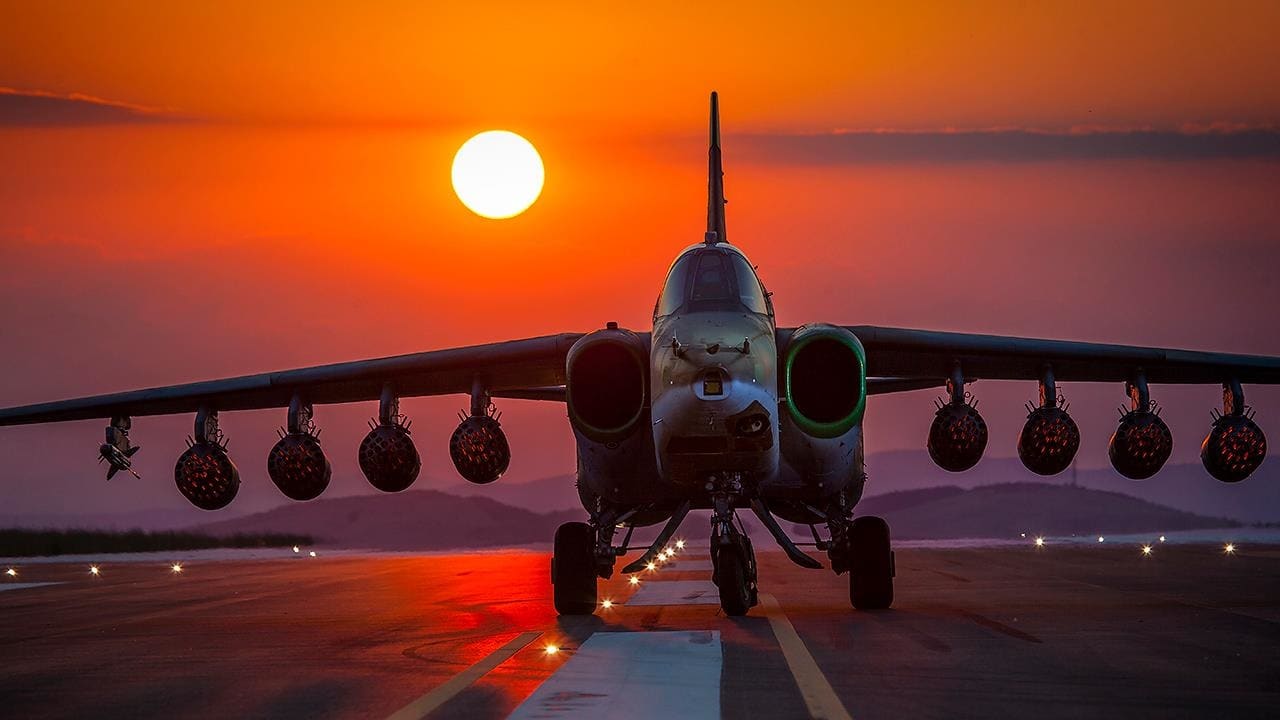 The Russian military is using many different Soviet-era weapons in Ukraine. That means tanks like the T-72 and T-80 are waging war all over Ukraine. However, the Su-25 is unique as some call it a flying tank. One expert gave us his take on the subject: The Sukhoi Su-25 “Frogfoot” jet attack aircraft is a Soviet-origin close air support (CAS) fighter first serially produced in 1978. Given the production timing and role of the aircraft, many have drawn analogies to the similarly timed and designed American A-10 Thunderbolt II “Warthog” CAS fighter. Indeed, both have served similar roles in the conflicts to which they have been party. Moreover, they have remained fixtures of air power for much longer than other fighter aircraft. That is because they often serve indispensable combat roles supporting personnel on the ground.

Like the Warthog, the Frogfoot is heavily armored (both planes often being referred to as “flying tanks”). It is a bit smaller, lighter and speedier than the A-10, and is powered by dual R-195 turbojet engines. Also like the Warthog, the plane is known for the amount of firepower it can provide. It sports a 30-millimeter AO-17A internal gun and ten external wing pylons able to load air-to-ground missiles and both laser-guided and unguided bombs. Typically, however, it has been loaded up with unguided 250- or 500-kilogram bombs, cluster bombs and rockets. The rockets loaded are often quite diverse. Some come in pods containing dozens of smaller 57- or 80-millimeter rockets. Other loadouts contain the five-shot 130-millimeter S-13 system. Still other loadouts go even larger, incorporating singular 240- or 330-millimeter rockets.

The Frogfoot has seen combat in a range of conflicts. Su-25s flew more than 60,000 sorties during the Russian war and occupation in Afghanistan. They have been flown in conflict in Africa, as well as in Nagorno-Karabakh. During the Russo-Georgian war of 2008, both the Georgians and the Russians flew Frogfoots. More recently, Frogfoots have been commandeered by both Ukrainians and Russians since the full-scale Russian invasion of Ukraine this year.

The Frogfoot’s global footprint can be largely accounted for by two facts. First, the plane was originally designed in the Soviet Union for export. Secondly, many Frogfoots ended up in former Soviet states following the disintegration of the USSR.

Despite its popularity, however, the Frogfoot has had its image tarnished by its shortcomings. Compared to the Warthog, the Frogfoot has a shorter range and loiter time (loiter time being of immense consequence in running CAS missions), can operate at only half the altitude, and can carry only half the load of munitions that the Warthog can carry. In addition, the Warthog usually carries precision-guided munitions such as the Maverick antitank missile and its GAU-8 cannon is still larger and more effective than the Frogfoot’s gun.

Moreover, despite being a “flying tank,” the Frogfoot has shown to be particularly vulnerable to shoulder-launched sur-to-air missiles (SAMs). During the Soviet occupation of Afghanistan, Mujahedeen trained on US-supplied Stinger missiles shot down a number of Frogfoots, forcing the fighter to higher altitudes. Additionally, during the 2008 Georgian war, Russia lost a number of Frogfoots. Most recently in Ukraine, both Ukrainians and Russians have lost more Frogfoots than any other aircraft.

Despite reinvestments and upgrades to this legendary craft, it still appears vulnerable in situations where air space remains contested. However, this should surprise no one. CAS jets such as the Frogfoot operate best in environments where airspace is clear and safe. No matter the number of upgrades to the jet, this single point will remain the most relevant in determining where and when combat aircraft such as the Frogfoot or Warthog will be most effective.