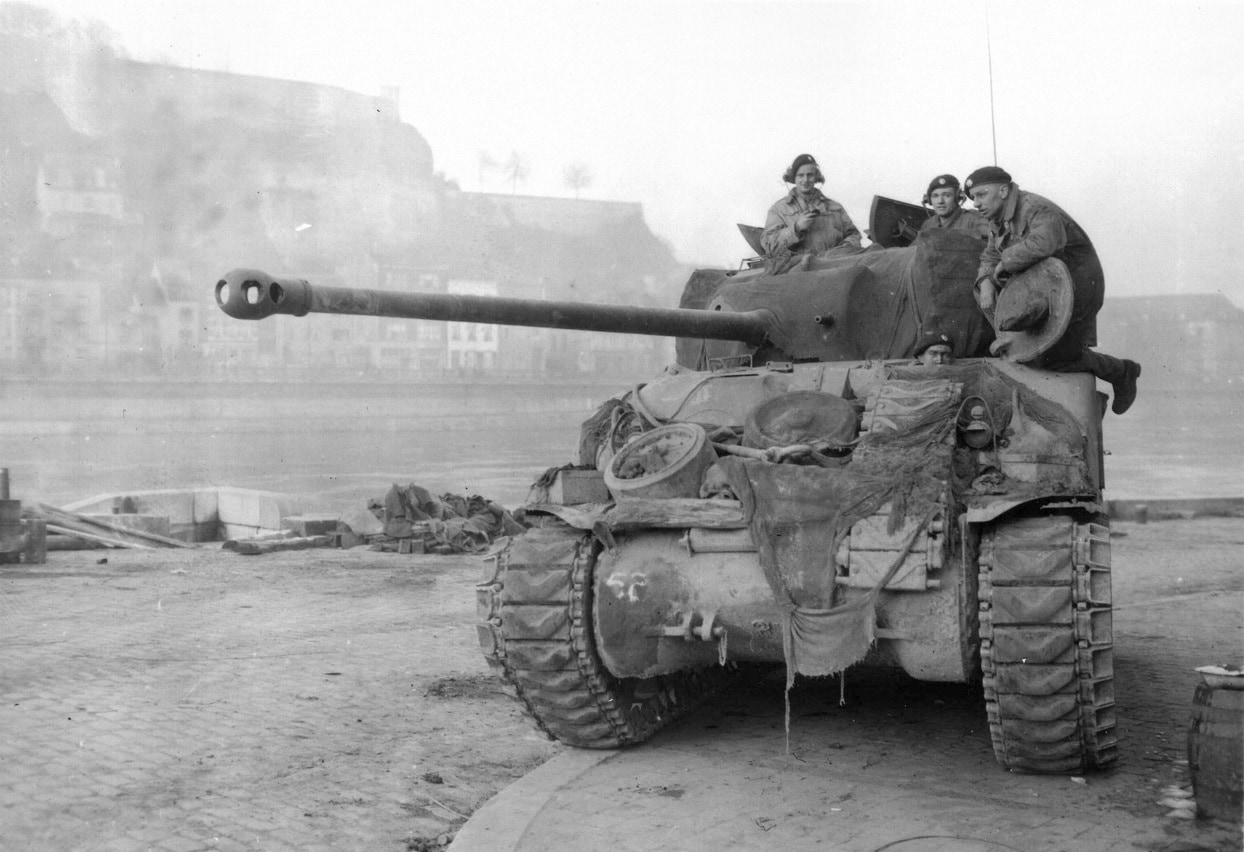 The M4 was a tank that was a big part of World War II. But was it any good? Some experts think it was a total piece of junk, while others think it was a strong weapon of war and deserving of a place in history. Here is what one expert told us: “Quantity has a quality all its own.” The above quote is often attributed, correctly or otherwise, to Joseph Stalin. Whoever said it first, the statement is often a theme when applied to Soviet-designed weapons systems, from the Avtomat Kalashnikova AK-47 rifle, to jet fighters such as the MiG-23 “Flogger” and MiG-21 “Fishbed,” to the venerable T-34 medium battle tank.

But the truism could also apply to certain weapons systems made in America, especially during WWII, when U.S. wartime industrial capacity was at its peak. Arguably no other American-made platform of World War Two fits the proverb quite like the M4 Sherman medium battle tank.

The M4 Sherman’s March From the Seas

Not counting prototypes, a total of 49,234 of these tanks were produced, a number surpassed only by the Soviet T-34. Officially the Medium Tank, M4, this iconic tank kept the U.S. Army’s then-common naming convention of nicknaming its armored beasts after American Civil War generals, Yankee and Rebel alike. For example, the M3 medium tank was named for both Robert E. Lee and Ulysses S. Grant, depending on whether it had the U.S.-patterned turrets or the British-patterned turrets, respectively. In the case of the Sherman, Civil War buffs can’t help but wonder how much WWII Southron tankers – especially those from Georgia and South Carolina – had to swallow their pride when serving as crewmembers in a vehicle named for their most despised Union officer.

However, unlike its Civil War namesake, the Sherman tank didn’t so much march to the sea as it marched from the seas – from North African, French, and Italian shores, moving inland to confront the might of Nazi Germany’s war machine head-on.

As beloved and iconic as the Sherman tank was and remains, it has also been tarnished as a bit of a lovable loser due to the fact that it was, to be brutally honest, outgunned and outclassed by later WWII German battle tanks like the vaunted and fearsome Tiger. This reputation is strongly enforced by myriad books, military history documentaries on YouTube, and the box office blockbuster Fury, all of which propagate the mostly accepted notion that the M4 had anywhere from a 3:1 to 5:1 loss-to-kill ratio versus the Tiger – although there is at least one YouTube video out there that dares to challenge this notion.

By that same paradigm, you might believe that it was only through sheer numbers — somewhat akin to how T-34s defined the Battle of Kursk — that the M4 eventually came up on the winning side of the war. Or to go back to the Civil War analogies, similar to the popular myth that it was only through sheer numbers, and not through any sort of fighting prowess or skilled generalship, that the Union defeated the Confederacy.

Even if one does accept these numbers as gospel truth, that doesn’t make the Sherman a truly inferior tank, any more than legendary middleweight boxers such as Jake LaMotta or “Marvelous” Marvin Hagler can be considered inferior boxers because they would most likely be knocked out when matched up against heavyweights like “Iron Mike” Tyson or Evander Holyfield. To quote the title of former U.S. Army officer turned freelance writer Miguel Ortiz’s 2021 article, “The Sherman was actually a great WWII tank.”

“Against the early-war Panzer III and Panzer IV tanks, the Sherman’s 75mm M3 short-barrel gun was capable of delivering knock-out punches. Moreover, the tank’s sloped frontal armor was adept at bouncing the incoming German fire…In 1946, the U.S. Army’s Ballistic Research Lab conducted a study on the engagements fought by the 3rd and 4rd Armored Divisions during 1944. The study examined 30 armor-on-armor engagements and found that the Sherman had a 3.6-to-1 kill ratio against the German Panther.“

Ortiz and other defenders of the Sherman’s reputation have provided some additional context: The M4 was not designed for a purely tank-killing role like the Tiger was. Contrary to the typical Hollywood-embellished depictions in popular media and video games, the majority of Allied tank engagements on the Western front were against anti-tank guns, infantry, and fortified positions like bunkers. Against those sort of targets, the Sherman’s 75mm main gun performed just fine, thank you very much.

The Enemy’s Perspective on the M4 Sherman

But if you don’t want to take American writers at their word, how about words of praise from a high-ranking enemy figure? In this case that figure was no less than Albert Speer, Hitler’s Minister of Armaments and War Production:

“On the Southwest Front, opinions are in favor of the Sherman tank and its cross-country ability. The Sherman tank climbs mountains that our Panzer crews consider impassable. This is accomplished by the especially powerful engine in the Sherman in comparison to its weight. Also, according to reports from the 26.Panzer-Division, the terrain-crossing ability on level ground (in the Po valley) is completely superior to our Panzers. The Sherman tanks drive freely cross-country, while our Panzers must remain on trails and narrow roads and therefore are very restricted in their ability to fight.”

Besides being blessed with greater speed, maneuverability, and versatility, the Sherman was far more reliable and maintenance-friendly than the Tiger. Even the most ardent critics of the Sherman and greatest fans of the Tiger will readily concede that fact, as the German behemoth was infamous for its frequent mechanical breakdowns. To use a handgun analogy, a 9mm pistol that goes “BANG!” every time you pull the trigger beats the hell out of a .45 ACP that can’t go a full magazine without jamming.

And that doesn’t even factor in the upgraded 76mm gun of the Firefly variant of the Sherman, which gave its crews a much better fighting chance against those Tiger bogeymen. Alas, brevity dictates that’s a separate topic – one we will have to discuss at a later date. Stay tuned, folks.