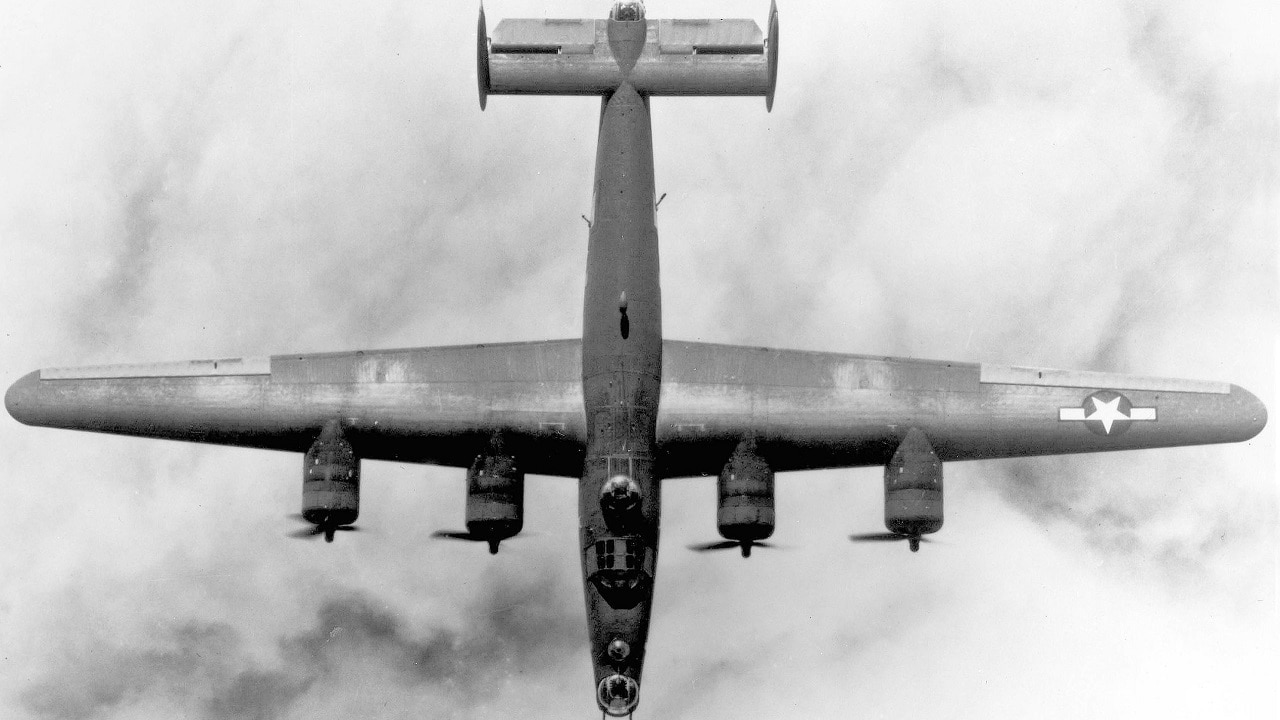 B-24 photographed from above, showing the Davis wing design.

She wasn’t as beloved as the B-17 Flying Fortress, and she didn’t make the literally earth-shattering history of the B-29 Superfortress. But nonetheless, the B-24 Liberator heavy bomber was still a key contributor to the Allied aerial victory during WWII. Let’s take a look at how this Liberator lived up to her name by contributing to the ultimate literal liberation of nations and peoples suffering under the Axis jackboot.

The Liberator Comes to Life

The B-24 carried a crew of up to 10: the pilot and co-pilot; the navigator and bombardier — who could also double as nose or “wiggly ear” gunners — the radio/radar operator, who sometimes doubled as a waist gunner. the flight engineer, who operated the upper gun turret (when fitted); and up to four crew members who could be located in the waist, operating waist guns, a retractable Sperry lower ball turret (belly) gun, and a tail gun turret.

So, the inevitable question: what were the differences between the Liberator and the “Flying Fortress?” And which one was superior? On the one hand, the Lockheed Martin historical info page makes a pretty compelling case for the Liberator: “In time the B-24 would boast a long, tapered wing atop its fuselage, which allowed impressive long-range cruising capabilities. A B-24 could reach 290 miles per hour and carry a 5,000-pound bomb load for 1,700 miles, giving it a longer range, greater speed, and a bigger payload than its B-17 cousin.“

In addition, that aforementioned ball turret on the B-24 was retractable, whilst the B-17’s was not; for those of you who’ve read the book Black Thursday by Martin Caidin, you can appreciate what a scary place that ball turret could be due to the exposure to enemy fire.

On the other hand, the B-24 had a reputation for being more difficult to fly, and whilst it displayed innovation by being the first American bomber to sport a tricycle undercarriage, the plane was also a challenge when it came to taxiing. The B-24 did not have the ability to absorb the brutal punishment that the B-17 could. To quote WWII B-17 pilot Tom Wiley:

“During the war and after, I always thanked B-24 pilots for taking the heat off of those of us in the B- 17s. The Jerries always went after the B-24s first because they went down so easily. German Dfighters would pass us up to get to the B-24s, because of the narrow wings … A former German fighter pilot I met once told me that he could never fly into our B-17 formations because our tails were too big. He could dart into B-24 formations because they had narrow tails, and he would shoot them out of the sky. But he couldn’t do that with our B-17s.”

Those debates aside, the Liberator definitely had her fair share of hellacious missions. For the sake of brevity, this article will touch upon three of them; the first one is quite well-known to history buffs, whilst the latter two are not and therefore deserve more recognition.

Plastering — and Plastered at — Ploești

The most (in)famous B-24 mission was, of course, Operation Tidal Wave, the August 1, 1943 bombing raids against “Hitler’s gas station,” the oil refineries at Ploești, Romania, which were supplying 30 percent to 50 percent of Nazi Germany’s fuel. Instead of the typical high-altitude attacks, the B-24s assigned to this daring mission would conduct their attacks from a mere 200 feet.

The attack resulted in the temporary elimination of 46 percent of total annual production at Ploești, with three refineries losing 100 percent of production. Unfortunately, those loss figures were only temporary, and way too high a price to pay for the 53 bombers lost along with 310 American airmen KIA and 186 more either captured or interned. Five Medals of Honor were awarded, three of them posthumously.

A far more successful B-24 bombing mission had taken place six months prior to Ploești, against the Gotha German aircraft factory – best known for the feared Gotha G.V. heavy bombers of WWI. Though the Liberator crews suffered fearsome losses therein, the surviving warbirds dropped 98 percent of their bombs on target, leveling Gotha’s capabilities in a single run; this was considered one of the best examples of precision bombing during WWII.

In the Pacific Theatre of Operations, there were raids against the oil refineries at Balikpapan, Indonesia, the so-called “Ploești of the Pacific.” Given how oil-starved Imperial Japan was even before the war started, the importance of Balikpapan to Emperor Hirohito’s forces could scarcely be overstated.

Beginning in October 1944 and culminating in April 1945, the B-24s of the 90th Bombardment Group — AKA “The Jolly Rogers” — conducted a series of airstrikes that left the refineries virtually destroyed. This accomplishment was made even more remarkable by the fact these missions constituted the longest daytime trajectories ever flown by B-24s: 2,600+ miles!

The B-24 was the most heavily (no pun intended) produced combat aircraft in history, with 18, 482 airframes built. Yet astonishingly, only thirteen Liberators remain operational today, and only one of those is fully restored and flying: “Witchcraft,” a B-24J owned by the Collings Foundation — headquartered in Stow, Massachusetts — as part of their Wings of Freedom Tour.