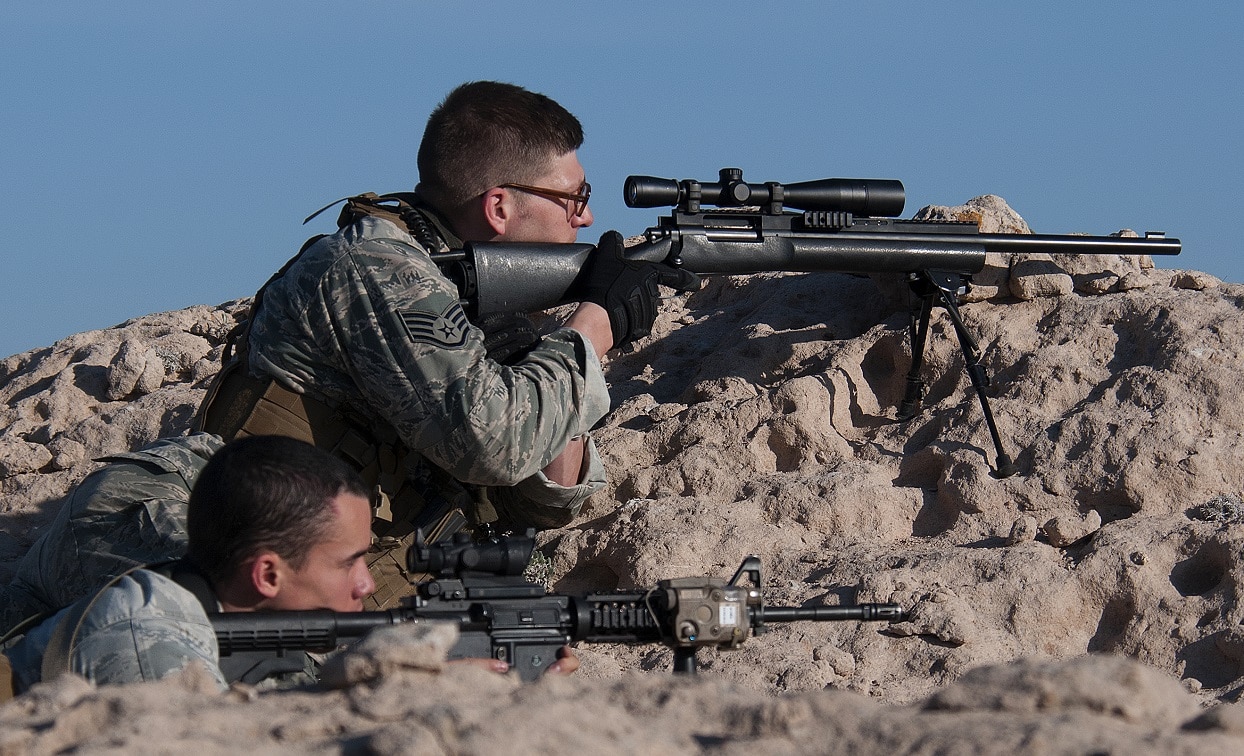 In the mostly — but not always — good-natured world of interservice rivalries, the sister services might’ve been inclined to scoff at the notion of the U.S. Air Force having a counter-sniper program and sniper rifle to go with it — at least prior to 9/11. Why would the kinder, gentler “zoomies” of the “Chair Force,” aka the “Air Farce” (as SEAL Team 6 founding commander “Demo Dick” Marcinko preferred to call the branch) be interested in sniper rifles?

Shouldn’t that precision killing stuff be left to the hardcore ground-pounders of the Army, Navy SEALs, and Marine Corps? Well, 21 years after the kickoff of the Global War on Terror (GWOT), the USAF counter-sniper program is still going strong, and no one is laughing anymore.

Their weapon of choice? The M24 Sniper Weapon System.

One Team, One Fight, One Rifle

Even before the Air Force selected the M24, it was already a battle-proven weapon system, thanks to its adoption as the standard sniper rifle back in 1988. As noted in a 2015 information sheet released by the Public Affairs office at Minot AFB, North Dakota (which is where yours truly was stationed at the beginning of his Air Force career after finishing boot camp and Security Forces tech school):

“The United States Air Force most commonly employs the M24 Sniper Weapon System for its precision shooting needs. The M24 SWS is referred to as a weapon system because it isn’t only the rifle; the system includes the accessories and attachments that help the rifle be used more effectively, like optics and a bipod…The rifle itself is a modified version of the venerable Remington 700, a common bolt-action hunting rifle that’s been ubiquitous in the United States since the 1960s. There are variations on the M24, but the most common configuration is chambered for the 7.62x51mm NATO cartridge, and has a 24-inch barrel. The M24 weighs about 16 pounds with all of its attachments onboard…The effective range of the 7.62 NATO version is officially documented at 800 meters, but during the Iraq War, Army Staff Sgt. Jim Gilliland made a confirmed kill at 1,250 meters with an M24 chambered in the cartridge.”

The USAF counter-sniper program actually pre-dates 9/11. I was a member of the first post-9/11 USAF Officer Training School (OTS) graduating class — Class 01-08, graduation and commissioning date September 27, 2001 — and to fulfill the first of our three mandatory “death by PowerPoint” presentations that were used to evaluate our professional briefing skills, I chose to discuss the then-fledgling program.

At the time, it was envisioned for potential flashpoints such as the Korean Peninsula, wherein, in the case of the resumption of full-scale hostilities, North Korean special forces would prioritize destroying or disabling USAF aircraft whilst still on the ground at Osan Airbase and Kunsan Airbase. As former USAF Security Forces SSgt Larry Knoll stated, “Day or night, our job is to take out a target before he can fire at one of our multimillion dollar aircraft or kill someone.”

As a sign of how forward-thinking the program was, back on April 14, 2001, it graduated its first female sniper, then-Senior Airman Jennifer Donaldson, now Capt. Jennifer Weitekamp of the Illinois Air National Guard. In Capt. Weitekamp’s own words: “The school was not easy and there were days I wanted to go home. I was the first woman to go through, it was because of that and the opportunities it would open up for future women that helped me get through the training and kept me motivated.” Since then-SrA Donaldson’s, now Captain Weitkamp’s glass ceiling-busting achievement, at least eight other women have graduated from the program.

The USAF Police Alumni Association page provides further insight on how far the program has come:

“USAF Security Forces Counter Snipers Teams were first trained at The Air Force Counter Sniper School at Camp Joseph T. Robinson Army National Guard facility in Arkansas. In 2008 the school was moved to Ft Bliss outside El Paso, TX. The course was renamed Close Precision Engagement Team with the move to Bliss. Beginning with Operation Enduring Freedom in Afghanistan, Air Force Security Forces leaders recognized the need for a specialized team  to aid in base exterior reconnaissance and to support  Security Forces personnel outside the base perimeter… The process for Airmen to become a certified Air Force sniper begins with the Advanced Designated Marksman course, an 11-day training course that familiarizes the Airman with the M24 weapon system. Following ADM and through recommendation of instructors, an Airman can return to Fort Bliss, Texas to attend the 19-day Close Precision Engagement Course to learn field techniques and tactics to use in conjunction with the information learned during ADM.”

However, before you can begin the training courses described, you must first successfully become a USAF Security Forces troop. For more information on accomplishing that particular goal, visit the Air Force website. (And no, even though I was Security Forces — HOOAH!! — rest assured that I am not an official recruiter or paid spokesperson.)