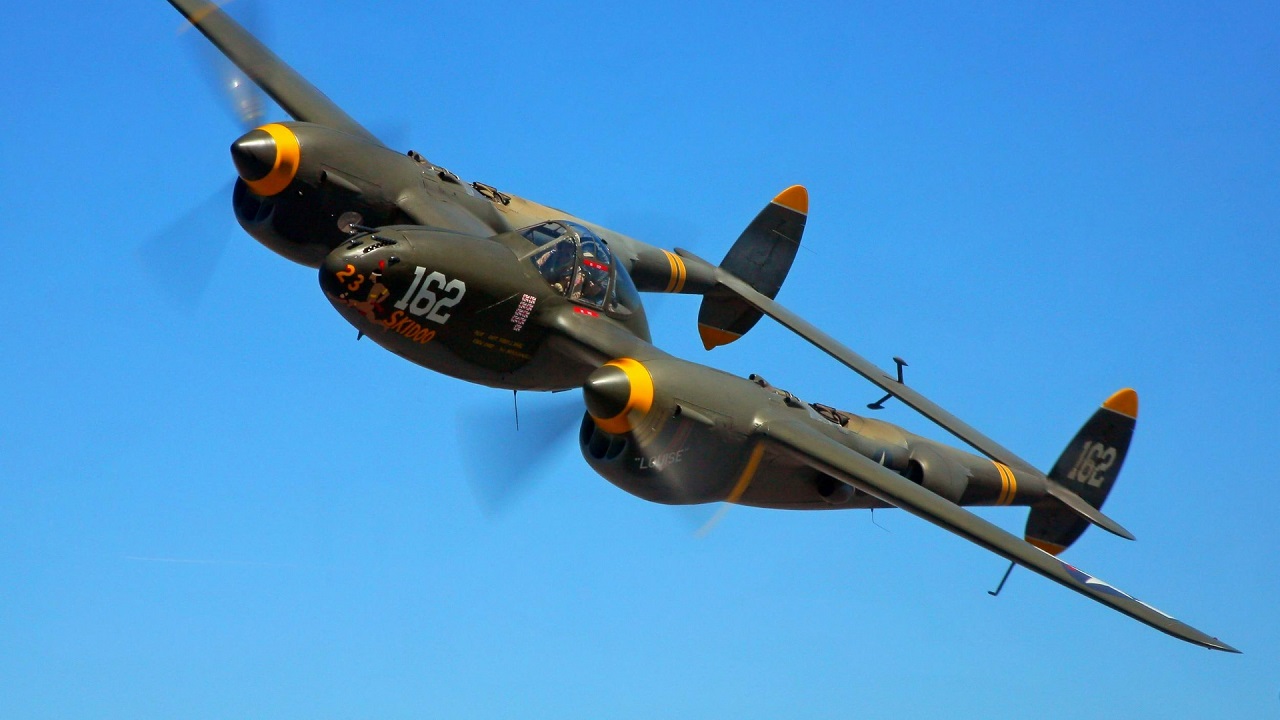 I have written multiple stories on the aircraft originating from Lockheed/Lockheed Martin’s legendary Skunk Works program, and passing references to the World War II-era P-38 Lightning fighter plane pepper those pages. It is time to finally dedicate a story to the Lightning herself. After all, this was the plane flown by America’s Ace of Aces.

The Lockheed P-38 Lightning was indeed the very first aircraft produced by Skunk Works and its iconic mastermind, Clarence “Kelly” Johnson. As a quick aside, this P-38 is not to be confused with either the American P-38 GI Pocket Can Opener, or the German Walther P38 9mm semiautomatic pistol, both of which coincidentally also served during the Second World War.

The Lightning made her maiden flight on Jan. 27, 1939, and it was officially introduced into operational service in July 1941. As noted by the official Lockheed Martin info page on this historic warplane:

“[T]he twin-boomed P-38 was the most innovative plane of its day, combining speed with unheard-of advances: two supercharged engines and a potent mix of four 50-caliber machine guns and a 20-mm cannon…Upon its official introduction in 1940, the P-38 was capable of climbing to 3,300 feet in a single minute and reaching 400 mph, 100 mph faster than any other fighter in the world. It also doubled as an intimidating long-range threat, capable of carrying a larger payload than early B-17s and boasting a range of 1,150 miles…Its versatility and ruggedness were legendary. It could sink a ship.  Strafed enemies on the ground. Crippled tanks. Destroyed entrenched pillboxes and shot down numerous fighters and bombers in all theaters of war.”

Lightning Strikes in the Pacific

The late, great Maj. Richard Ira “Dick” Bong, America’s “Ace of Aces” as mentioned above, scored all 40 of his aerial kills against Imperial Japanese aircraft in a Lightning. America’s second-place ace, Maj. Thomas B. “Mickey” McGuire Jr., also scored all of his victories — 38 of them, poetically enough — in a P-38. Tragically, neither of these heroes lived to see the end of the war. Mickey McGuire died over the Philippines on Jan. 7, 1945, while Dick Bong did manage to come home but was killed during a test flight on Aug. 6, 1945, the same day that the first atomic bomb was dropped on Hiroshima. The tragic irony of Dick’s death was further compounded by the fact that it occurred when he was flying another Skunk Works project, the P-80 Shooting Star jet fighter.

Most significantly from a strategic standpoint, the P-38 was the platform used to fatally shoot down Imperial Japanese Navy Admiral Isoroku Yamamoto, a deathblow from which the collective morale of the IJN never truly recovered. As military aviation historian Don Hollway puts it, “In all of American history, the only equivalent is the operation that killed al Qaeda mastermind Osama bin Laden. Yamamoto was no different from any officer caught in a sniper’s crosshairs – in uniform, on a combat mission, a legitimate military target. Today, when the enemy rarely wears a uniform, the debate centers on targeting terrorist leaders with remote-controlled drones. Few remember that the precedent was set 70 years ago, over the jungles of Bougainville.”

All in all, the P-38 downed more than 1,800 Japanese aircraft — with more than 100 of her pilots attaining ace status — thus making her the most statistically successful U.S. Army Air Forces fighter of the Pacific theater of WWII.

Superstar in the Pacific, B-List Celebrity in Europe

For various reasons, this same fighter scored only moderate success against the Luftwaffe in the European theater. Yes, a P-38 was the first American warbird to score a kill against a German adversary during the war, doing so against a Focke-Wulf Fw-200 Condor on Aug. 14, 1942. Yes, the Germans referred to the plane as “der Gabelschwanz Teufl,” the “fork-tailed devil.” And yes, it was a P-38 that enabled the legendary U.S. Air Force fighter pilot Col. Robin Olds to score the first two aerial victories of his storied career. However, the P-38 also struggled to adapt to the climate of Europe. As described by Col. Olds himself and by the late, great aviation author Robert F. Dorr, himself a USAF veteran:

“‘I loved the P-38 but I got those kills in spite of the airplane, not because of it,’ Olds recalled. ‘The fact is, the P-38 Lightning was too much airplane for a new kid and a full-time job for even a mature and experienced fighter pilot. Our enemies had difficulty defeating the P-38 but, as much as we gloried in it, we were defeating ourselves with this airplane.’ It was, Olds hastened to add, ‘the most beautiful plane of our generation.’ And it fought well in the Mediterranean and the Pacific. So what happened in northern Europe, and how could things have gone so wrong?…The P-38 performed usefully but suffered from a number of problems. Its Allison engines consistently threw rods, swallowed valves and fouled plugs, while their intercoolers often ruptured under sustained high boost and turbocharger regulators froze, sometimes causing catastrophic failures…Arrival of the newer P-38J to fill in behind the P-38H was supposed to help, but did not help enough. The J model’s enlarged radiators were trouble-prone. Improperly blended British fuel exacerbated the problems: Anti-knock lead compounds literally seethed out and became separated in the Allison’s induction system at extreme low temperatures. This could cause detonation and rapid engine failure, especially at the high power settings demanded for combat.”

The USAF officially retired the P-38 in 1949, but the fighter remained in service with the Honduran Air Force until 1965. The Lightning’s proud legacy is carried on in name by a current Skunk Works project, the F-35 Lightning II. As for the original Lightning, out of the 10,037 total airframes produced, 26 of them survive today, and in turn 10 of those are airworthy. Among these airworthy Lightnings are Skidoo, a P-38J variant at the Planes of Fame Museum in Chino, California, and Glacier Girl, a P-38F with Lewis Air Legends in San Antonio, Texas.