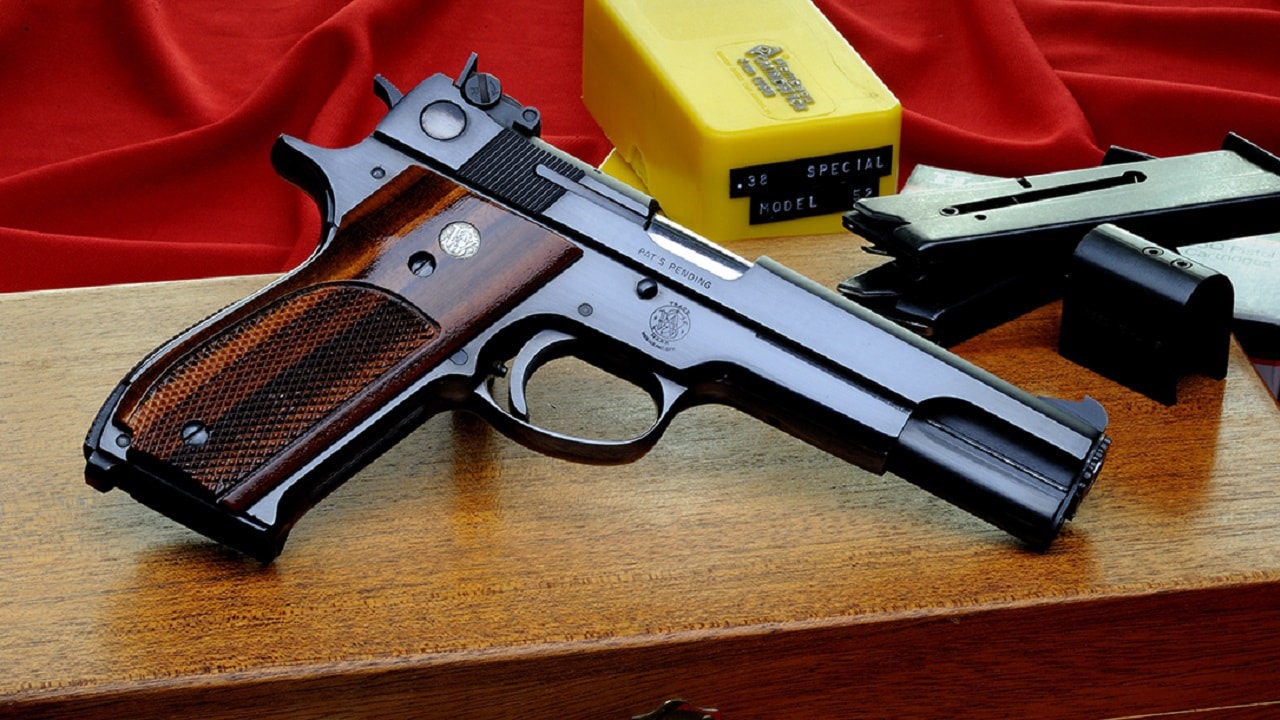 When handgun hobbyists think of the rise of the so-called “Wonder Nines,” — or as the late Lt. Col. Jeff Cooper derisively called them, the “crunchenticker” — i.e. high-capacity double-stack 9mm semiautomatic pistols with traditional double-action (DA) trigger lockwork, they’re naturally inclined to think of the 1980s, as this was indeed the decade that such handguns began to proliferate in domestic American police holsters to replace the longstanding .38 Special and .357 Magnum revolvers. However, to find the first historical example of a DA 9mm autopistol being adopted by Stateside cops, you actually need to go all the way back to … 1967. That was the year that the Smith & Wesson (S&W) Model 39 was adopted by the forward-thinking Illinois State Police (ISP).

If you wish to nitpick, the S&W M39 wasn’t a true “Wonder Nine,” as it had a mere 8-round magazine, but the caliber and DA trigger still met the criteria. Prior to the Cold War, the 9mm Parabellum cartridge had been an almost exclusively European venture. However, during WWII, the Walther P-38 left a sufficiently positive impression on the U.S. Army Ordnance Corps that they decided to issue a proposal for an American equivalent of the P-38.

With that in mind, S&W began its development of the Model 39 in 1949 and sent it to the Army service pistol trials in 1954. Lo and behold, the Army decided for the time being to abandon its search for a replacement for its venerable M1911 .45 auto, but Smith hardly skipped a beat, opting to release the M39 into the civilian market in 1955, thus ushering in both the first U.S.-designed double action semiautomatic pistol of any kind and S&W’s First Generation of autopistols.

Fast-forward to 1967, and, as Massad Ayoob noted in a 2014 American Handgunner article, “There was a time when the Illinois State Police encouraged its troopers to use their issue weapons as much as possible. The S&W Model 39 they began issuing in 1967 was expressly adopted to have a single handgun suitable for uniform wear, plainclothes assignments and off-duty carry. It worked out reasonably well.”

Speaking of Mas Ayoob, in his 1987 book The Semi-Automatic Pistol in Police Service and Self Defense, he gave a mixed assessment of the M39’s performance. On the one hand, ISP troopers’ hit rates in actual gunfights more than doubled from the revolver days, from 25 percent to 65 percent, plus several troopers’ lives were saved by the pistol’s safety devices in felony gun grab situations. On the other hand, Ayoob criticized the gun’s reliability and durability issues, particularly the fragility of the extractor.

Fortunately, the manufacturer corrected these maladies with the M39-2 variant in 1971. The ergonomics of the “dash-2” earned the praise from a wide variety of gun writers from Finn Aagaard of the NRA American Rifleman Magazine to the hardcore M1911 .45 guy Chuck Taylor – who declared the Smith pistol as having the best feel of any autopistol he’d ever handled.

I bought my own S&W M39-2 from the Belleville Shooting Range, now known as Metro Shooting Supplies, in southern Illinois — the gun itself was an ISP surplus pistol, appropriately enough — back in 2006. Though I haven’t fired the piece in over five years —she’s in storage in Fort Worth, whilst I’m living in the D.C. area — I still put enough live rounds through her back in the day — roughly 1,500 — to get some definite impressions of both the positives and negatives of the gun.

Pros: Pleasant to shoot; not that the 9mm is a hard-kicking round by any means, but the ergonomics, though not as ultra-pleasing to me as they were to the aforementioned Messrs. Aagaard and Taylor, definitely helped ensure that the M39-2 was reasonably enjoyable to work with. Practical accuracy was adequate at 7, 15, and 25 yards alike, thanks to an acceptable set of factory sights. I don’t recall any reliability issues. And from an aesthetics standpoint, I would rate those old-school Smiths right up there with the Beretta 92F/M9, SIG Sauers, and the CZ-75 as some of the best-looking semiauto pistols series ever.

Cons: Well, first and foremost, the gun has been out of production since the early 1980s, when the First Generation Smith autopistols were replaced by the second-generation 3-digit series guns such as the S&W Model 439 and M459, followed by the third-generation 4-digit series pistols such as the Model 5906 in the late 1980s. Ergo, finding spare parts in case of breakage will require either a competent gunsmith and/or an aftermarket parts catalog; S&W’s official Lifetime Service/warranty policy states that “Smith & Wesson will repair, without charge, for the lifetime of the original owner, any Smith & Wesson handgun purchased on or after February 1, 1989, and any M&P15 series rifle, that is found to have a defect in material or workmanship.” In other words, if you buy an M39 nowadays, you’re pretty much on your own.

The trigger, whilst not atrocious, is definitely far from the smoothest in double action mode or crispest in single action (SA) mode; the second- and especially the third-generation models were definite improvements. And whilst long-distance accuracy wasn’t as bad as Mas Ayoob made it out to be, it was fairly underwhelming, so it wouldn’t be my first, second, or even third choice for competitive shooting.

The Verdict: Yea or Nay?

Those shortcomings aside, if you can find a Smith & Wesson Model 39 or 39-2 at a reasonable price, by all means go for it, as they’re a neat piece (no pun intended) of American firearms history.

In this article:Gun, Gun Review, Guns, Model 39, Smith and Wesson