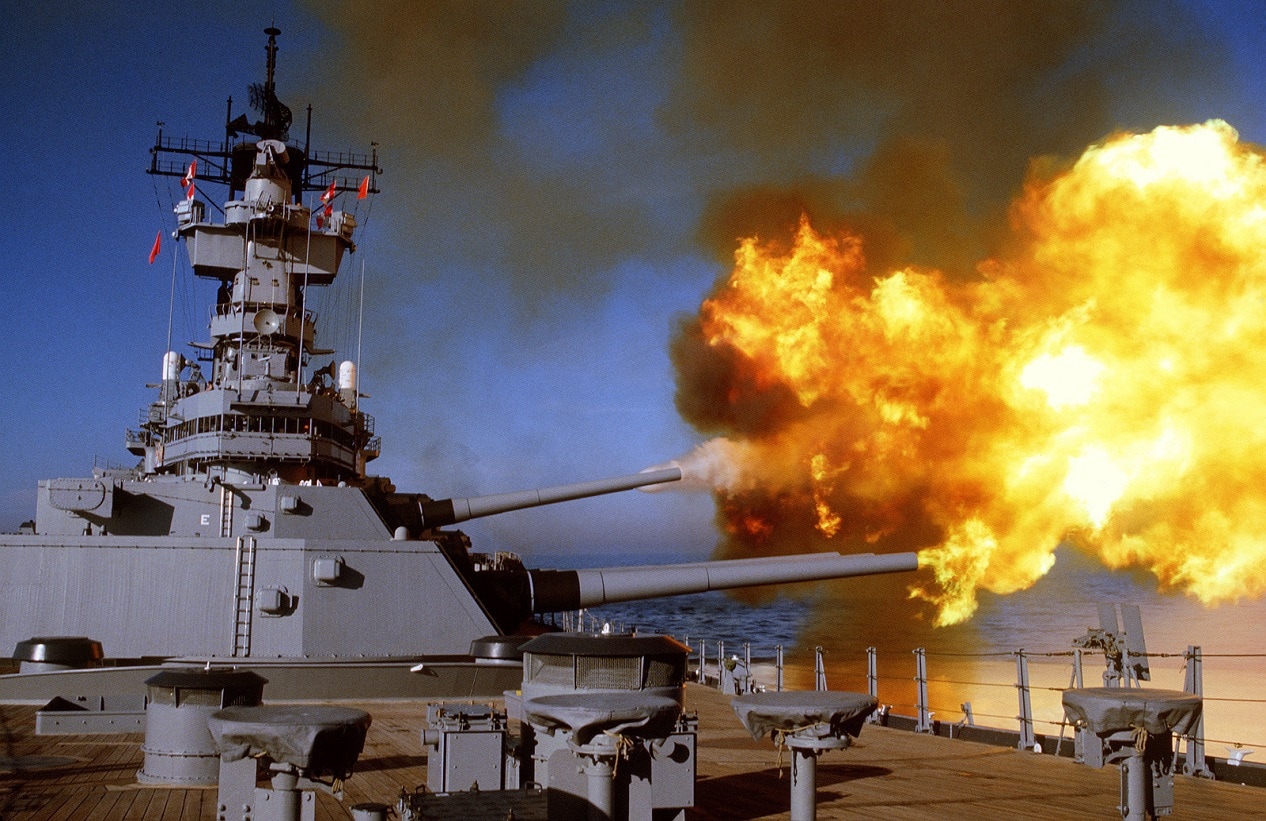 The Nos. 1 and 2 Mark 7 16-inch/50-caliber guns are fired during a main battery firing exercise aboard the battleship USS NEW JERSEY (BB-62).

All the battleships to see service in the United States Navy during the Second World War were crewed by men who went well above and beyond. It could also be easily argued that there wasn’t even a single “bad battleship” in the history of the U.S. Navy. However, topping the not-so-short list of the very best would be the USS New Jersey (BB-62), the second of the United States Navy’s Iowa-class battleships.

BB-62 would prove to be America’s most decorated battleship – earning more battle stars for combat actions than the other three completed Iowa-class warships. USS New Jersey participated in nearly all of the Western Pacific campaigns from her arrival in the theater in January 1944 until the end of the Second World War.

USS New Jersey was often fondly referred to by her crew as “Big J,” but during the Second World War, she was also known as the “Black Dragon” due to her being painted in the dark Navy Blue 5-N on vertical surfaces and Deck Blue, 20-B, on horizontal surfaces.

The dark single-color Camouflage Measure 21 was employed early in the war on many smaller vessels, including destroyers, to make it difficult for them to be seen at night. This color was maintained from her launching until June 1945, when she was repainted in the horizontal “two-tone” Camouflage Measure 22, which was used throughout the rest of the World War II era.

The Big J was a battle wagon built for war, and just a year after being launched on December 7, 1942, she sailed into action. Her first combat deployment was in the Fifth Fleet under Adm. Raymond A. Spruance, where she provided fire support during the landings on the Marshal Islands. Her massive 16-inch guns were next employed on Saipan and Tinian, while she also screened the American aircraft carriers during the Battle of the Philippine Sea, where the anti-aircraft fire from New Jersey and other screening ships proved virtually impenetrable.

USS New Jersey next served as the flagship of Adm. William F. Halsey’s Third Fleet, and took part in the Battle of Leyte Gulf; and under Rear Adm. Oscar C. Badger II, commander of Battleship Division 7, supported the assault on Iwo Jima and then Okinawa.

After the end of the Second World War, like many of the U.S. Navy’s big gun boats, USS New Jersey was decommissioned. Yet, she was the only U.S. Navy battleship that was returned to duty in both the Korean War, where she took part in two combat tours; and the Vietnam War, where the WWII-era carrier conducted frequent bombardments along the South Vietnamese coast.

USS New Jersey was recommissioned a final time in December 1982, after then-President Ronald Reagan sought to dramatically increase the size of the U.S. Navy with upwards of 600 warships. As BB-62 had been recalled to duty for Vietnam, her modernization differed slightly from those of the other Iowa-class battleships. She was greatly updated and was eventually equipped with 16 RGM-84 Harpoon anti-ship missiles, eight Armored Box Launcher (ABL) mounts for 32 BGM-109 Tomahawk missiles, as well as a quartet of the United States Navy’s Phalanx Close-In Weapon System (CIWS) Gatling guns for defense against enemy anti-ship missiles and enemy aircraft.

However, sometimes the old ways work best, and USS New Jersey fired her big 16-inch guns in combat operation during the Lebanon crisis of 1983-84. It also marked the last time those guns were fired in anger.

She holds the notable distinction of being the most decorated battleship in U.S. history.

Today, her ongoing battle is with the harsh weather and the elements that have taken a toll on her deck and hull – yet, so beloved is the warship that she remains carefully maintained to preserve and honor the memories of those brave men who served on her from World War II to the end of the Cold War.