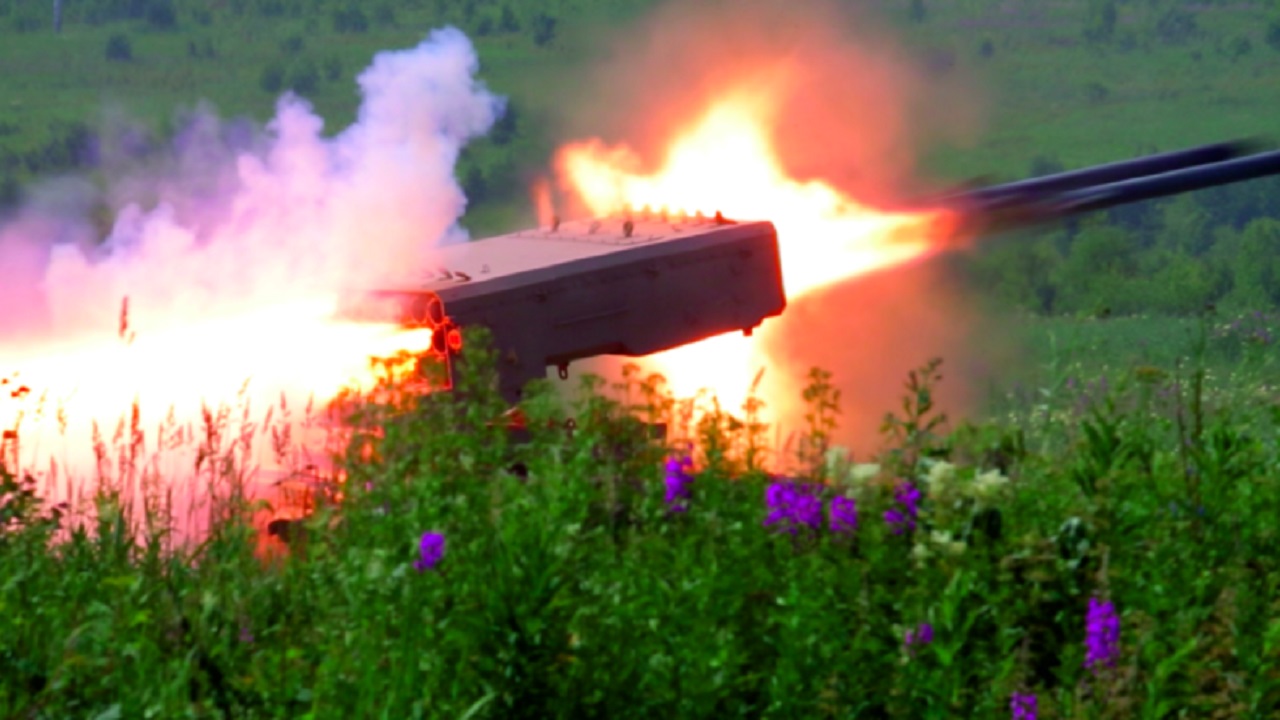 When it comes to thermobaric weapons – the term just sounds ominous. Thermobarics are also described as aerosol weapons or vacuum bombs, terms that likely sound even worse to your ears. To put these deadly concepts to use, Russia has its TOS-1A multiple launch rocket system that fires thermobaric warheads to rain down death and destruction. Even the Russians call them “heavy flamethrowers.” These weapons fit into what I call “tactics of massive saturation and retaliation.” In broader terms, this means that artillery in Ukraine is turning back the clock to the horrors of World War One.

How Do These Deadly Warheads Work?

First, before we get into the broader aspects of artillery used in the war, let me examine thermobarics in more detail. Thermobarics work as fuel-air explosives. There are two separate explosions. Picture it this way. The first charge opens up a container with the explosive aerosol cloud that drifts down to the target. If this is a hard target such as a tank or building – the spray can seep in through openings or cracks. Next is the detonation at thousands of degrees Fahrenheit. This vacuums the oxygen from the atmosphere and creates a huge explosive cloud that is bigger and more deadly than a conventional warhead. Many soft targets are turned into vapor. Those who survive the blast often have severe injuries to the lungs, eyes, ears, and colon.

Russia Is Not Shy About The Use of Thermobarics

Russia has been using the TOS-1A thermobaric rocket launcher since the beginning of the war. The first reported deployment was in late February when 70 Ukrainian fighters were killed in the northeastern town of Okhtyrka. Russia believes one of the best ways to attack people in buildings in urban combat is to fire thermobarics, so people inside never make it out or are wounded so badly they are not capable of continuing to fight.

Should They Be Considered a War Crime?

While not banned under international law, human rights observers consider their use a war crime, especially when used against civilians.

Here Is a Primer on the TOS-1A

The TOS-1A is a more advanced variant than the original TOS-1 from the Soviet era. The TOS-1A was introduced to the Russian army in 2001 and was used in Chechnya. The launcher is mounted on a tracked vehicle with a T-72 chassis. A three-soldier crew operates the system.

The rockets are 220mm and there are 24 tubes. Each rocket weighs at least 381 pounds and the warhead is 29 pounds. Fortunately, the thermobaric rockets on the TOS-1A have a shorter range (3.7 miles) than regular multiple-launch rocket systems. 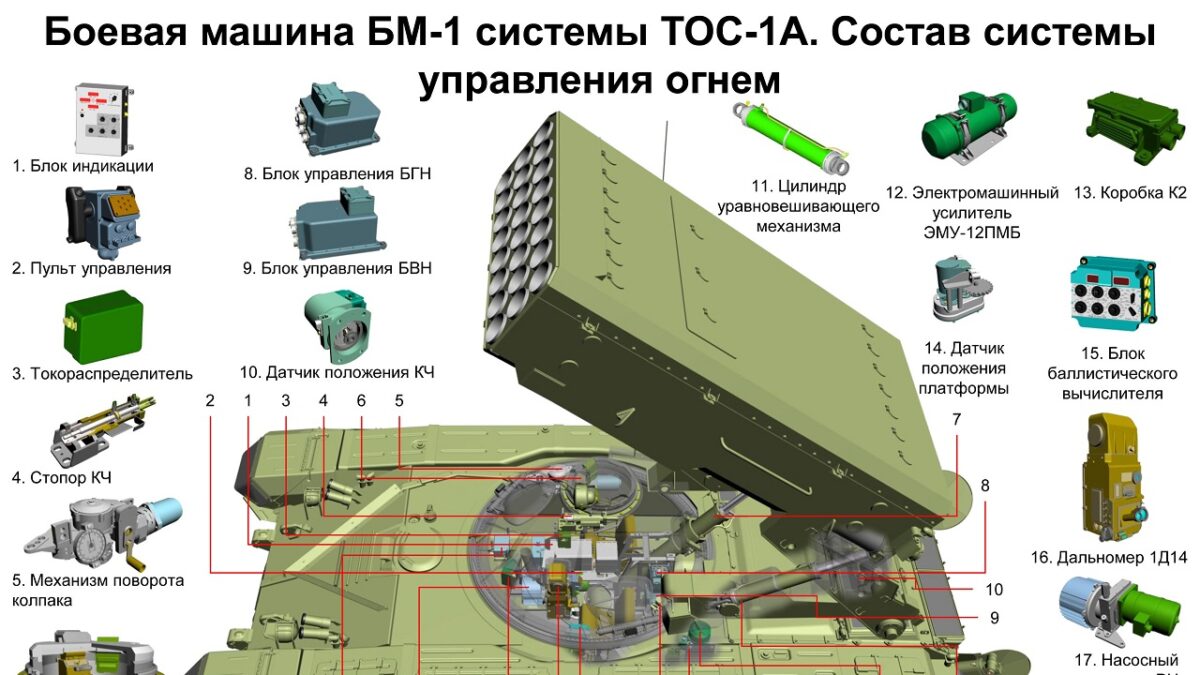 Russia Is Not the Only Operator

If Russia is willing to use thermobaric weapons against the Ukrainian soldiers and target civilians too, what does this mean for the broader war? Russian and Ukrainian artillery is here to stay. This war has become an artillery duel with no let up and with constant bombardment from both sides. The strikes are not always precise, but sometimes drones are used for targeting to make each firing more accurate. Analysts are seeing this more and more as unmanned commercial-off-the-shelf craft have multiplied in use. Drones used for targeting could make TOS-1A even more deadly.

Samuel Bendett, Adjunct Senior Fellow at the Center for a New American Security, has studied artillery use by both sides extensively during the war. Bendett believes we are not likely to see the shells stop flying. Bendett said in an interview with 19FortyFive that the original task of artillery is to first achieve “reconnaissance, target designation and artillery fire adjustment.”

Drones Are Now the Key

Bendett continued. “For years, the Russian military was developing reconnaissance fire/ reconnaissance strike contours (or complexes), with various sensors connecting ground artillery/MLRS to target. UAVs are absolutely an essential element in this equation, and the Russian Ministry of Defense was practicing and drilling this concept for years in domestic exercises, and then used it extensively in Syria. In Ukraine, both Russians and Ukrainians are using such contours to attack each other’s targets, and Russia’s use of UAVs like the Orlan-10 and commercial DJI quadcopters is providing an unprecedented level of speed and accuracy to the artillery forces,” he said. 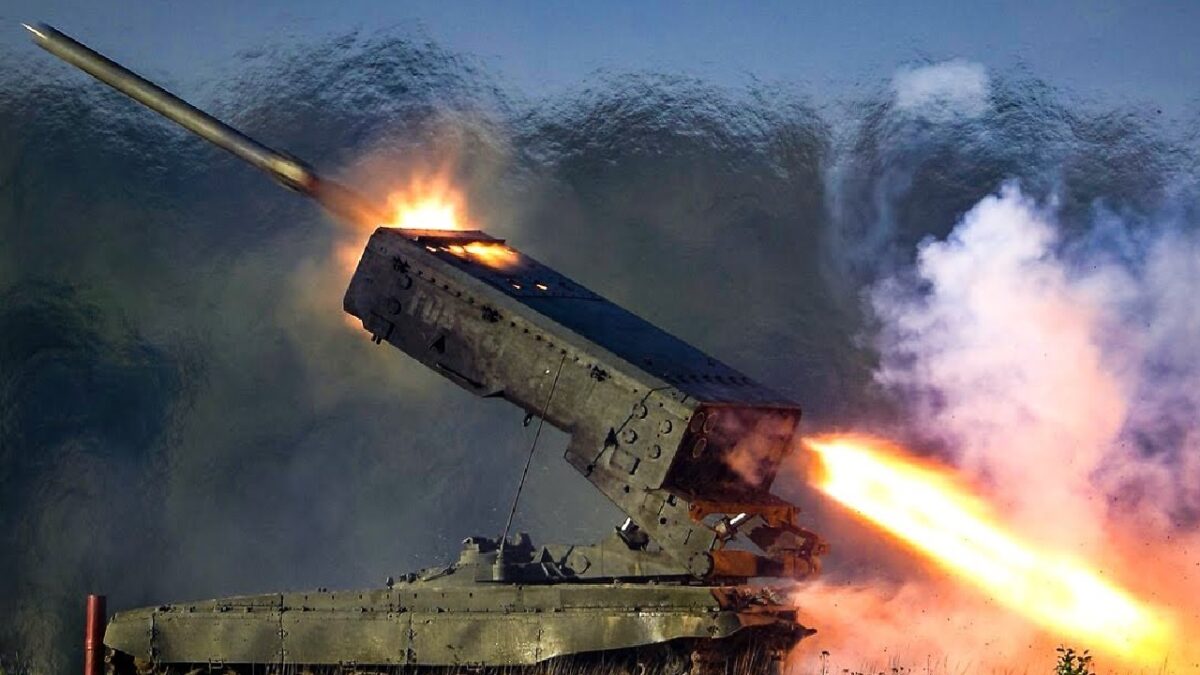 Former Russian General Saw How Artillery Was Changing the Fight

This makes multiple-launch rocket systems like the TOS-1A even more deadly. Bendett emphasized that the person to go to for all things artillery is Russia’s former General of the Army Yuri Baluyevsky who co-authored the 2010 military doctrine. Baluyevsky believes that modern war with artillery has turned back the clock to the dreadful era of World War One.

Baluyevsky said, “Simple Chinese-made commercial quadcopters have made a real revolution in the use of traditional cannon and rocket artillery, almost completely solving the age-old problem of reconnaissance, target designation, and artillery fire adjustment. When adjusted with the help of a drone constantly hovering over the target area, it became possible to use artillery with conventional projectiles with accuracy and efficiency comparable to firing precision-guided munitions. This … contributed to the return (most likely, still temporary) of traditional artillery to the pedestal of the ‘God of War’ in a meaning comparable to its value during the First World War.”

Where does the TOS-1A come in? Bendett’s opinion is that a precision strike is not always needed. “Of course, this does not mean that the Russian artillery is always looking for a precise strike – in some cases, there is a massive salvo to cover the entire area where Ukrainian forces and combatants may be located, which can cause a lot of destruction, and may or may not actually strike the intended target, but with an intent to cause significant material and psychological effect,” Bendett said.

The psychological effect of the TOS-1A is evident. The horrors that it brings to the battlefield ups the stakes in this war. Combine this with drone targeting and conventional multiple-launch rocket systems plus self-propelled and towed artillery, and you have a situation in which the combat can go on indefinitely and casualties are limited only by the number of shells both sides can transport to the battlefield. 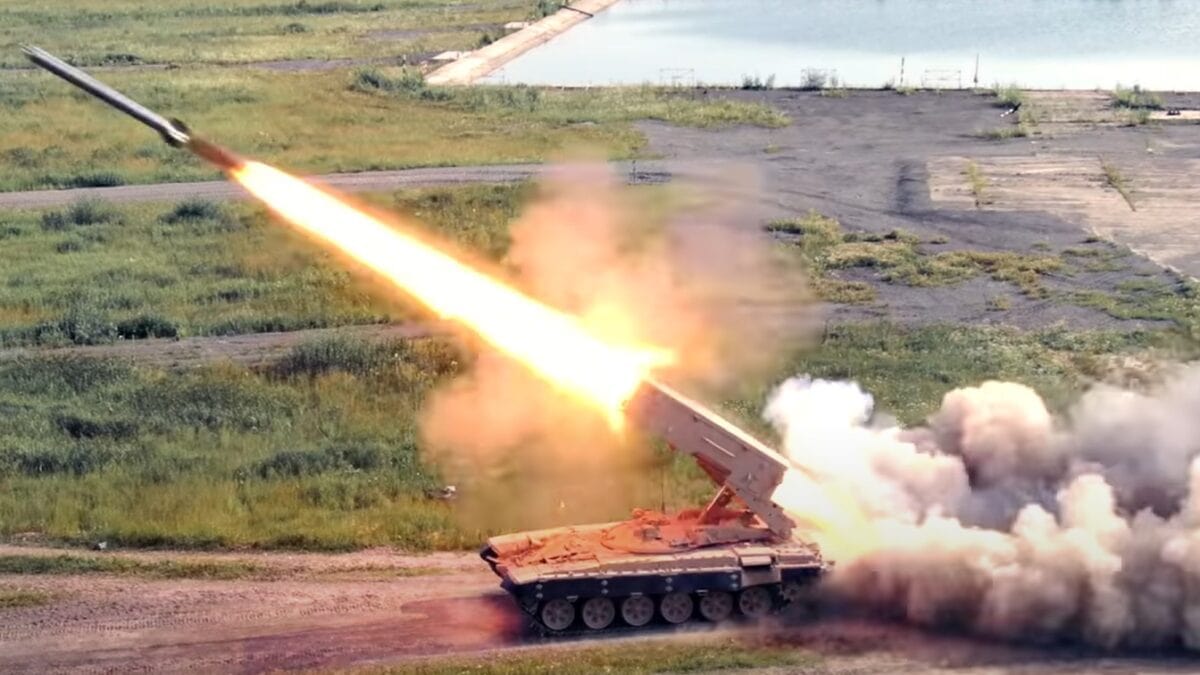 As Bendett concluded, “Given that both sides are using and perfecting their reconnaissance strike/fire contours, it’s likely we will see a continued long-term use of artillery by the Russian and Ukrainian forces.”

In this article:Russia, Thermobaric, TOS-1, Ukraine, War in Ukraine