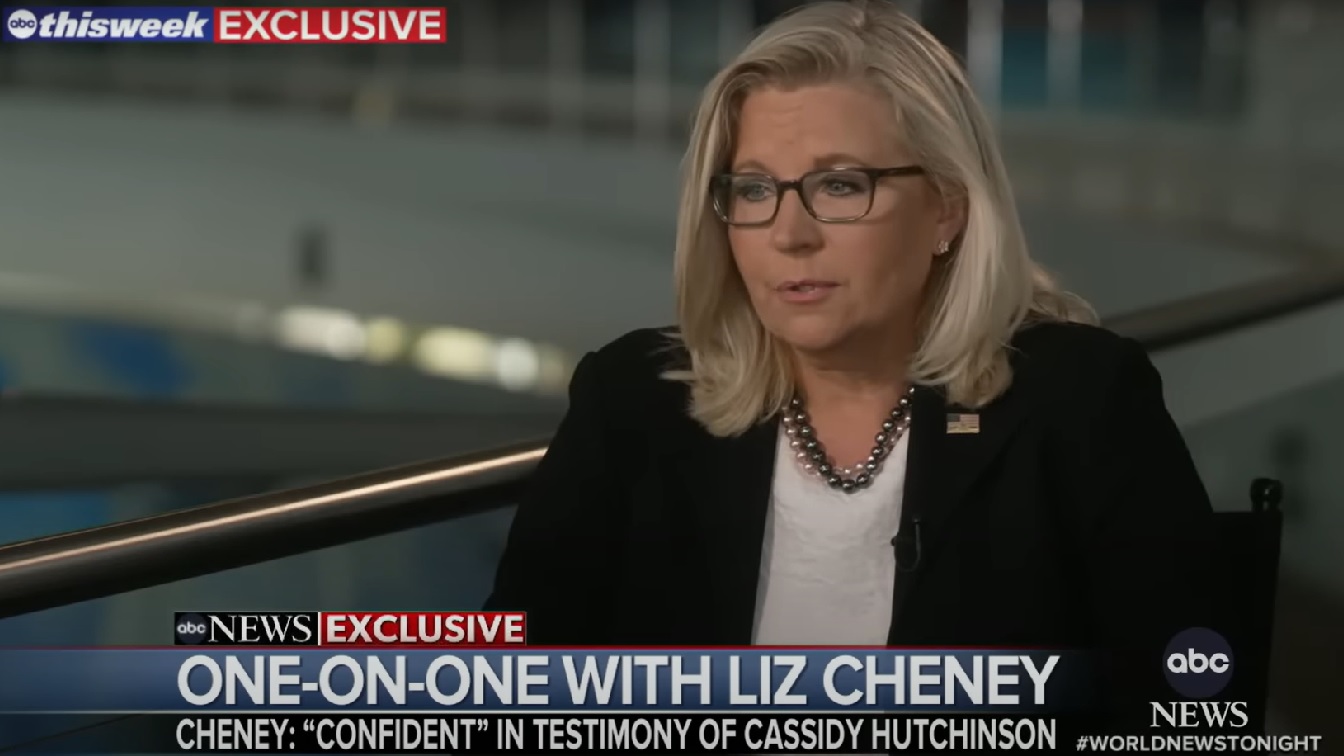 Liz Cheney on ABC This Week.

As expected, Liz Cheney lost the GOP primary for her Wyoming congressional seat. Actually, Cheney was trounced, receiving less than one-third of the votes in a district she previously dominated.

“Cheney of Wyoming was resoundingly defeated by Harriet Hageman in her Republican primary on Tuesday, handing Donald J. Trump his most prized trophy yet in his long campaign to purge the Republican Party of his critics,” Jonathan Martin reported for The New York Times.

Cheney’s defeat confirms that former president Trump still has sway over the GOP. And since Trump’s number one enemy within the GOP is Liz Cheney – who Trump has now run from office – the question presents itself: where does Cheney stand within the GOP?

Well, aside from Cheney’s stance on Trump himself, her willingness to call the 2020 election a fair win for Biden, Cheney is a thoroughbred conservative. Political scientist Lawrence R. Jacobs once described Cheney as “an arch conservative. She’s a hard-edged, small government, lower taxes figure and a leading voice on national defense.” Journalist Jake Bernstein echoed the sentiment: “Cheney is a true conservative in every sense of the word and she’s only moderate in relation to the radicalism that has seized the Republican party.”

I myself have painted Cheney in a similar light. “Undoubtedly, Cheney is a neoconservative hawk,” I wrote. “She was opposed to Biden’s withdrawal from Afghanistan, which of course was a twenty-year war that her father, former Vice President Dick Cheney,  had helped launch; she has even continued to promote the idea that there was a connection between al-Qaeda and Iraq – the falsified pretext upon which Dick Cheney constructed the Iraq invasion; she voted against repealing the 2002 Authorization of Military Force – another unfortunate vestige of the Bush-Cheney years; she has supported the use of torture; she opposes the no-first-use nuclear policy; she opposed the JCPOA. Liz Cheney is her father’s daughter.”

I rated Cheney a bona fide conservative with respect to domestic policies, too. “During Cheney’s 2013 Senate campaign, she opposed same-sex marriage, becoming estranged from her lesbian sister Mary in the process,” I wrote. “Cheney also refused to denounce the “birther” conspiracy that claimed Barack Obama was not born in America (and which marked Donald Trump’s entrance in the political arena).”

Accordingly, given Cheney’s stances and views on basically everything aside from Trump himself, Cheney is at home in the GOP. Yet, now it seems, following the Wyoming primary loss, Cheney is not welcome within her own party – putting her in something of a predicament. How will she proceed?

Cheney, who spent little of the $14 million she raised for her GOP primary, has just “converted her campaign committee to a federal “Leadership PAC,” CBS reported. “Political Action Committees (PACs) like these can be used to raise money even if she’s not a federal candidate, fund travel and donate to other political campaigns.” Clearly, Cheney is pivoting into something more ambitious than a Wyoming congressional seat – as the name of her new PAC suggests: “The Great Task,” a reference to Lincoln’s Gettysburg address. Cheney suggested a pivot, too. Appearing with her father, she referred to the “the beginning of a battle that is gonna continue and is gonna go on.”

Here’s the rest of Cheney’s statement:

“As a country we are facing very difficult and challenging times. We are facing a moment where our democracy really is under attack and under threat. Those of us across the board, Republicans, Democrats, and Independents, who believe deeply in freedom and who care about the constitution and the freedom of the country have an obligation to put that above party. And I think that fight is clearly going to continue and clearly going to go on.”

It makes sense that a politician who has been forcefully ousted from her own party would appeal to a higher cause – and directly to members of another party. Cheney is setting herself up (has been setting herself up) as a formal foil to Trump – a position for which she correctly recognizes a sizable market. As the country’s formal Trump foil, Cheney can relay bipartisan support to enhance her profile and her influence.

But, Democrats and Independents should remember that with respect to every other issue, Cheney is a conservative paragon, a proxy of her father, and ultimately, and clearly does not share their political views.