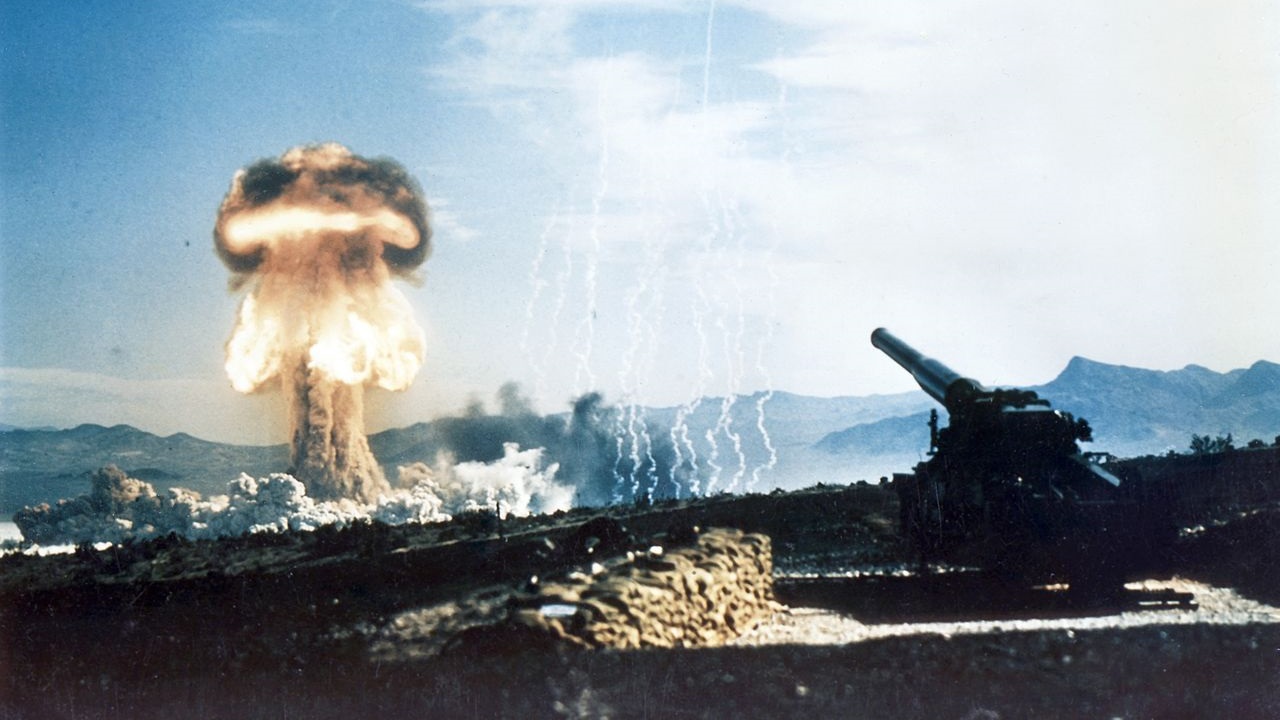 You probably know what the nuclear triad is – nuclear delivery methods by airplane, missile, or submarine. But what if I told you there was a different U.S. weapon during the Cold War that could have sparked a nuclear weapon exchange? I am referring to a nuclear cannon called “Atomic Annie,” which was the largest mobile artillery system ever built by the U.S. military. Officially named the M65 280mm Motorized Heavy Gun, the Atomic Cannon was only fired once, thankfully, and never brought on a nuclear crisis with the Soviet Union over its deployment.

The Germans Had Their Anzio Annie

The nickname Atomic Annie was a play on the German Krupp K5 “Anzio Annie,” which was one of the biggest railway artillery pieces during World War Two and used during the Battle of Anzio, Italy. If you count the rail car carrying it, the 288mm Krupp K5 weighed a remarkable 436,000 pounds. It had an accurate rifled barrel and could hit a target from 40 miles away. The shell weighed 562 pounds.

The U.S. Atomic Annie M65, built in the early 1950s, differed from the Krupp K5 because it could fire a nuclear shell that was just as powerful as the nuclear weapons used against Japan in World War Two. The Atomic Gun weighed 47 tons (86 tons with its trucks included) and was introduced into use in 1952.

The gun required a transporting system with front and rear 4X4 semi-trucks that was almost 39 feet long and could reach a speed of 30 miles per hour. It took five to seven soldiers to operate the gun. Each system cost $800,000 in 1950s dollars. That’s about $8.9 million today.

Gargantuan 280mm Was Accurate and Quick to Fire

The M65 has its own website, and the specs of the gun were amazing. According to its home page, “The gun could be emplaced and set up for firing in approximately 12 minutes and returned to the traveling mode in approximately 15 minutes. The publicly-acknowledged maximum range of the 280mm gun was 20 miles, hitting within 20 yards or less of the desired target. An Army veteran assigned to M65s in Okinawa reported the actual maximum range was 35 miles.”

One Shot, One Test

The Atomic Annie could fire the W-9 15 kiloton nuclear T124 280mm projectile. By 1953, the Army was ready to test the Atomic Gun. This happened at the Nevada Test Site (Nevada Proving Ground) during the Grable Test of Operation Upshot-Knothole after moving two cannons by rail from Fort Sill, Oklahoma. The gun propelled the nuclear shell eight miles, the shell then burst 524 feet over the impact zone with debris flying 500 feet. The yield was 15 kilotons. This blast was believed to have been able to take out an entire Soviet division.

Eisenhower Believed in a Nuclear Army

The Atomic Annie had some strategic impetus for its development. President Dwight Eisenhower envisioned a peace dividend after World War Two that he called “waging peace.” He thought that defense budgets were way too high. His thinking was that nuclear battlefield weapons could reduce the cost and reliance on soldiers and conventional arms such as tanks and smaller artillery pieces. Atomic Annie was an outgrowth of this concept to create a nuclear-based army.

Twenty Atomic Cannons were made, and they were sent to Europe and Korea but were never fired again. Only eight are still around. One was donated to the Smithsonian and the original Atomic Annie that fired the test resides at Fort Sill.