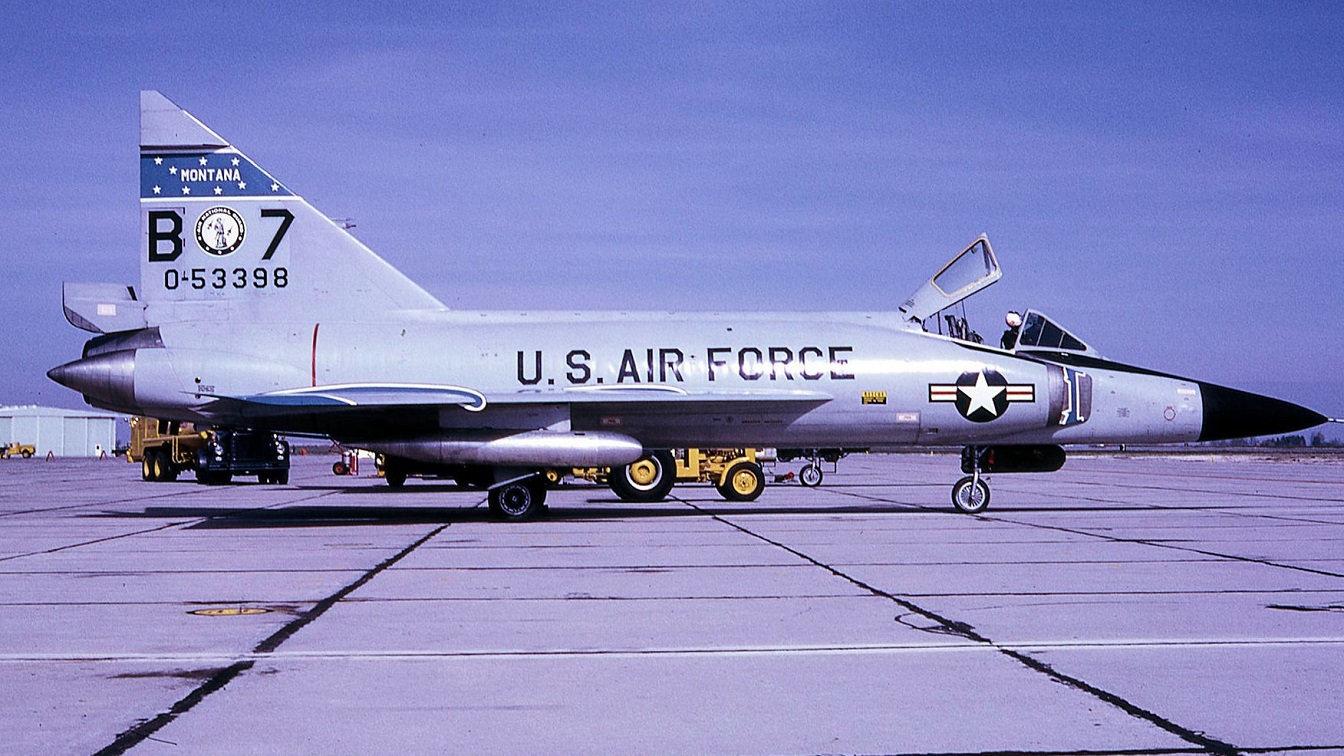 As I type these words, Yours Truly just celebrated the 23rd anniversary of his enlistment in the U.S. Air Force (USAF). So, even though I was actually a Security Forces troop (“HOOAH!”) and not an aviator, I reckon the occasion behooves me to write at least one article about a USAF airplane. Granted, the warbird I’ll be writing about this time – the Convair F-102 Delta Dagger interceptor– had already been retired for 20 years by the time I joined the USAF, but eh, what the hell, why nitpick?

The F-102 Delta Dagger was built by the now-defunct Convair (Consolidated Vultee Aircraft Corporation) Division of General Dynamics, which also made the B-36 Peacemaker and B-58 Hustler bombers and the F-106 Delta Dart interceptor (which became the eventual replacement for the Delta Dagger). She made her maiden flight on 24 October 1953 and officially entered USAF operational service in April 1956. The warbird traces her origins back to 8 October 1948, when a board of senior USAF officers recommended that the service organize a competition for a new interceptor scheduled to enter service in 1954; accordingly, the all-new design would initially be dubbed the “1954 Ultimate Interceptor.”

The end result was, as noted by the Aviation Museum Foundation of Robins AFB, Georgia, “the world’s first supersonic all-weather jet interceptor and the USAF’s first operational delta-wing aircraft.” The downside was that the warbird was just barely supersonic, with a maximum airspeed of Mach 1.1 (825 mph); with external fuel tanks attached, that figure dropped to Mach .95. This seemingly defeated the purpose for which the plane had been built in the first place, which was to catch enemy bombers! Cruising speed was 600 mph, range was 1,000 miles, and ceiling was 55,000 feet.

Did the Delta Dagger Disappoint?

So then, how did the F-102 perform in the real world? The aforementioned barely-supersonic speed of the aircraft compels my 19FortyFive colleague Peter Suciu to include it on his ignominious list of “The 4 Worst Jet Fighters Ever!” Others aren’t quite as harsh in their assessments, with one particular aviation historian noting: “For an aircraft that was only to be an ‘interim’ interceptor, the Deuce served a long and successful life and helped to deter the Soviets or any other enemy from sending bombers against the United States.”

Since WWIII never happened, the Delta Dagger never got to attempt to shoot down a Soviet bomber. However, she did see some combat in the deadly skies over Vietnam. According to military aviation historians Chris Hobson and Dave Lovelady – Mr. Hobson is a retired professional librarian and archivist who has managed military libraries in the UK for over 40 years whilst Capt. Lovelady is a retired USN F-14 Tomcat pilot – on their Vietnam Air Losses website: “Although air defence was the F-102’s primary task the aircraft was also used for combat air patrol, Arc Light escort, and even close air support and air interdiction.  The F-102s were known to have used their infra-red seekers to search for traffic on the Ho Chi Minh Trail and fire Falcon air-to-air missiles at blips on the radar.  The aircraft also used 2.75-inch unguided rockets against ground targets, but without much success.  The last F-102 lost in Southeast Asia crashed on 7 January 1969.”

A total of 14 F-102s were lost in Vietnam: one to air-to-air combat – victimized by a MiG-21 “Fishbed” — several to ground fire and the remainder to accidents. The plane was retired by the USAF in 1976 but remained in service with the air forces of bitter rivals Greece and Turkey for an additional three years.

Out of 1,000 F-102s built, none remain in flying condition, but 59 survive today as exhibits and permanent static displays at museums and airbases at Canada, Greece, Turkey, the Netherlands, and the U.S. Among the Stateside museums where you can view a Delta Dagger include the aforementioned Aviation Museum at Robins AFB, the Strategic Air Command & Aerospace Museum in Ashland, Nebraska, and the National Museum of the United States Air Force at Wright-Patterson AFB, Ohio.