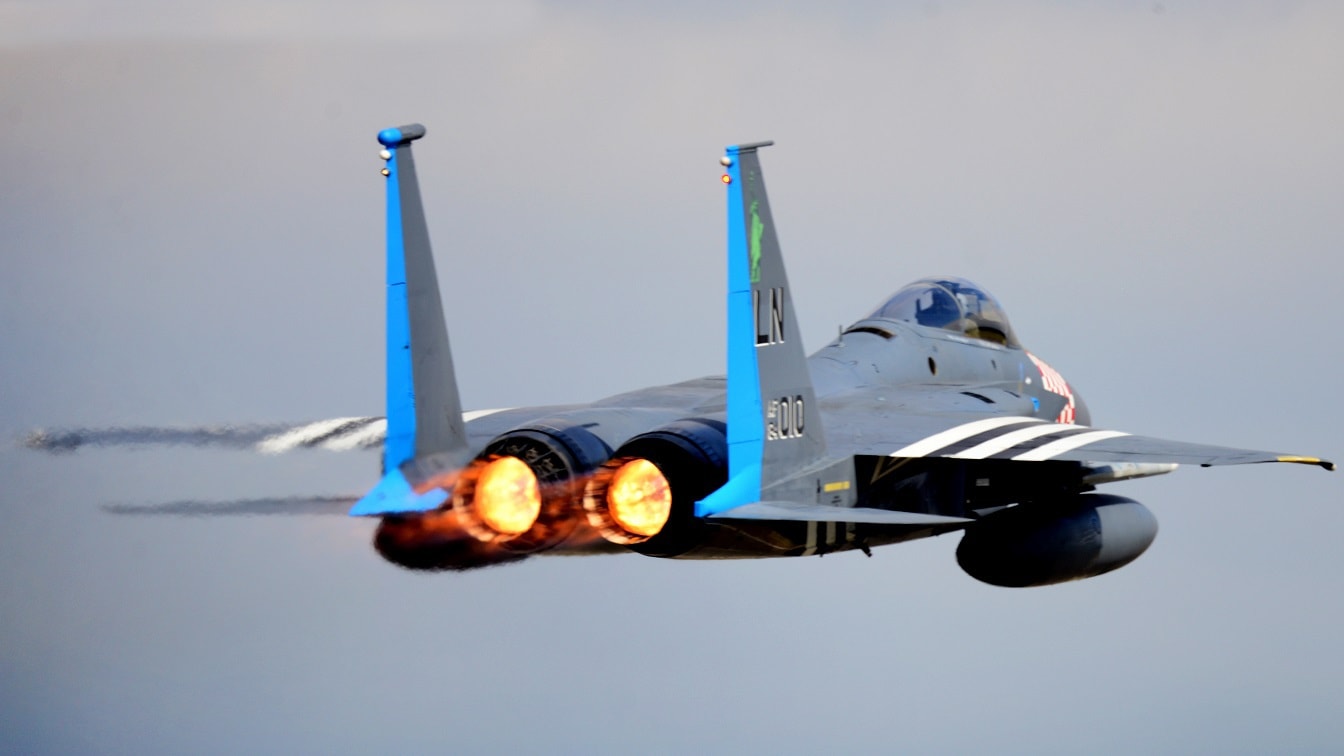 Meet the F-15C: In July, the U.S. military celebrated the F-15 Eagle’s 50thanniversary. For decades, the formidable fighter served as the mainstay of the Air Force’s aerial arsenal due to its versatile and cutting-edge capabilities. The all-weather, super maneuverable tactical fighter can penetrate enemy defense and outperform and out-dogfight any current adversarial aircraft. Its advanced electronic warfare system, hefty weapons payload and high engine thrust-to-weight ratio have made the F-15 Eagle one of the deadliest and greatest fighters ever developed. In fact, the Eagle possesses a truly stunning 104 to 0 kill ratio. Several variants have emerged from the original F-15 platform, including the F-35C, which has flown operationally in the majority of wars the Air Force has participated in over the years.

Where did the F-15C come from?

The F-15C is an enhanced variation of the original single-seat air superiority fighter. During the mid-1960s, the F-15 Eagle became the product of the Fighter Experimental (FX) concept. During the Vietnam War, the Department of Defense recognized the need for the U.S. to possess a dedicated air-superiority fighter. While the F-4 Phantom could perform a small air-to-air role in its overall mission, the requirement for a fighter to feature unmatched maneuverability in addition to top-notch weaponry and avionics was only fulfilled by the F-15. Designed by the defense giant McDonnell Douglas, the F-15 Eagle became the Air Force’s premier fighter instantaneously. In 1972, the F-15A took its first flight and was delivered to the 58thTactical Fighter Training Wing two years later. “Three hundred and sixty-five F-15As were built before production of the F-15C began in 1978. In January 1982, the 48th Fighter-Interceptor Squadron at Langley Air Force Base became the first Air Force air defense squadron to transition to the F-15.”

Although the F-35 Lightning II “Joint Strike Fighter” is widely recognized as the world’s stealthiest fifth-generation fighter on rotation today, the F-15E’s capabilities should not be discounted. The F-15, including its five variants, can carry a large number of missiles, ground bombs, fuel, advanced radar and is equipped with advanced electronic warfare capabilities. The F-15 E can carry up to 23,000 pounds of bombs with a carrying capacity of 15 JDAMS (Joint Direct Attack Munitions), way more than its near-peers. Equipped with a guidance kit and GPS, the Eagle has the ability to launch JDAMS up to 2,000 pounds to successfully hit targets “within less than five meters at distances as great as 15 nautical miles.”

Based largely on the F-15A variant, the F-15C model incorporates upgrades to its avionics as well as an increased fuel capacity. The single-seat F-15C and F-15D variants entered service with the U.S. Air Force in 1979. Despite the airframe’s additional internal fuel, provision for carrying exterior conformal fuel tanks, two Pratt & Whitney F100 afterburning turbofan engines and an increased takeoff weight, the F-15C (and F-15D) are very similar to their predecessor.

These models were first deployed in 1991 in support of Operation Desert Storm in the Persian Gulf. They escorted strike aircraft over a long range and scored 30 aerial victories during their participation in ODS. The F-15C’s success in its first operational deployment was followed by many more in subsequent conflicts. According to Boeing (formerly McDonnell Douglas), “F-15C, -D, and -E models participated in Operation Desert Storm in 1991. F-15s downed 32 of 36 U.S. Air Force air-to-air victories and struck Iraqi ground targets. F-15s also served in Bosnia in 1994 and downed three Serbian MiG-29 fighters in Operation Allied Force in 1999. They enforced no-fly zones over Iraq in the 1990s. Eagles also hit Afghan targets in Operation Enduring Freedom, and the F-15E version performed air-to-ground missions in Operation Iraqi Freedom.”

With over fifty years on the books, the F-15 Eagle and its five variants have evolved into perhaps the most powerful fighter-family in the U.S. Air Force. Despite the platform’s long service, it is unlikely to be retired anytime soon.