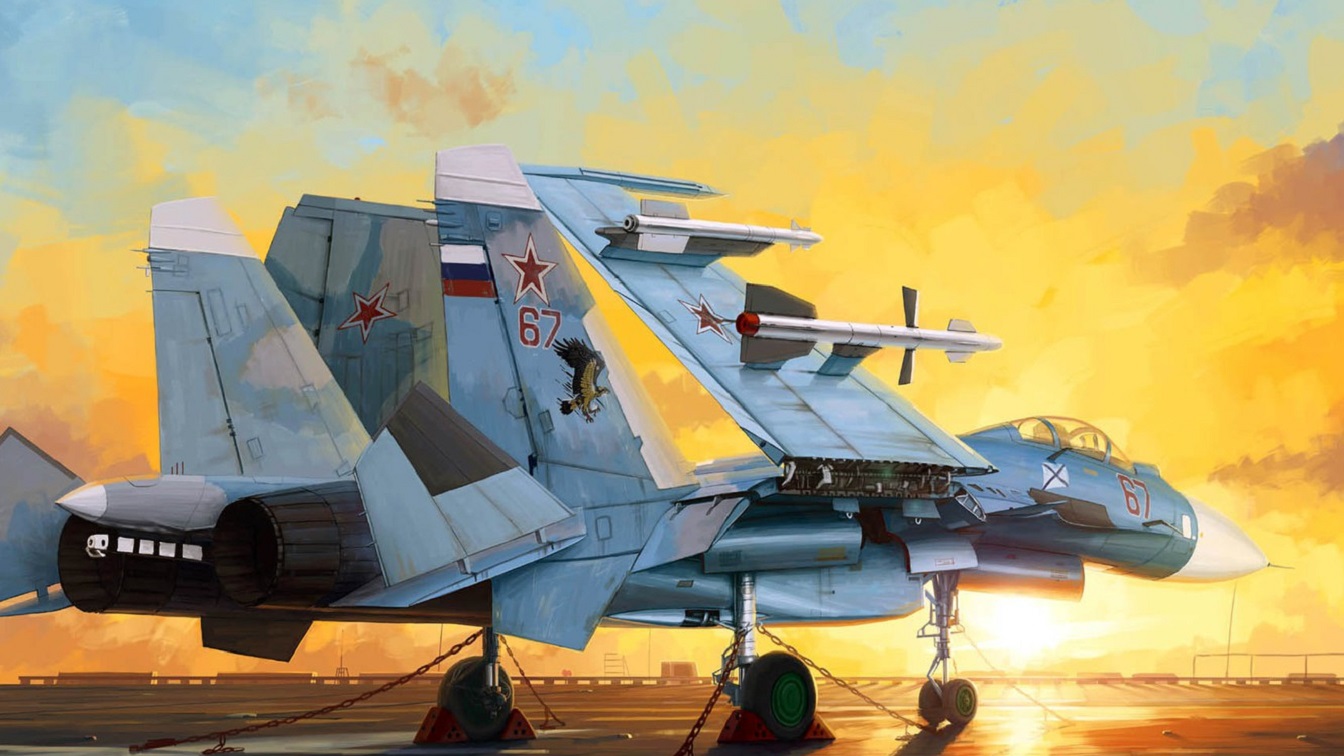 The Su-33 was meant to ensure that Russia‘s aircraft carriers had a powerful fighter jet to fly. Sadly the Su-33 has been a terrible performer and has been the victim of a lot of issues over the years. Is the Su-33 ready for retirement – or maybe the scrapper?

The Su-33 “Flanker-D” is a single-seat, multi-role fighter jet powered by dual AL-31F after-burning turbofan engines. It has a maximum speed of 1,430 miles per hour with a range of 1,860 miles and an altitude of 55,800 feet. Adapted from the land-based Su-27, the Su-33 is designed specifically for operation on Russia’s sole aircraft carrier, the Admiral Kuznetsov.

Despite its similar appearances to the Su-27, the Su-33 Flanker-D has many practical differences including a reinforced undercarriage, more technical landing gear, wing canards, folding wings, a larger wing area, and slightly more powerful AL-31F3 engines. Features such as the landing gear, folding wings, larger wing area, and engine are specifically designed for tighter accommodations and short runways on aircraft carriers. One additional difference is that the Su-33 includes two more hardpoints than the Su-27, bringing the total to twelve.

Yet it is this reality—that the Su-33 really can’t load some of the most important munitions (particularly for running air-to-ground missions)—that has made the fighter a very limited success at best and a failure at worst. Thus, despite being branded as a multirole fighter, the Flanker is in reality an air superiority fighter rather than truly multirole.

Although the actual use of the Su-33 has been limited, the times it has been used have been tragic.

Since the aircraft first entered service in 1999, at least three of the 35 produced have been lost in accidents, including one during a summer 2001 airshow in Russia. The fighter’s integration with the Admiral Kuznetsov—its sole purpose—has also seen challenges.

While the Kuznetsov was deployed to the Mediterranean to extend air support for Bashar al-Assad, a Su-33 crashed in a landing attempt, prompting the Russian military to move the entire fleet to land.

Because of these difficulties, there has been a move within the Russian Navy to replace many of the currently deployed 30-35 Su33s with Mikoyan MiG 29Ks. Though these aircraft are not as maneuverable as and lack the range of the Su-33, they are much more capable for ground strikes and sport a greater selection of standoff missiles and guided bombs.

The MiG-29K also carries electronic countermeasures, is fit with low observability technology, and a relatively more sophisticated radar system meant to aid in ground-strike capabilities. On top of this, the MiG is smaller and lighter, making it more appropriate for operating from a carrier. The aircraft is also cheaper to produce with lower servicing costs.

In the past, there has been some discussion surrounding exports of the Su-33, first to China and then to India, both countries that operate refitted Soviet-era aircraft carriers. But negotiations with China broke down, Beijing ultimately opting for the Chinese-made Shenyang J-15, a virtual clone of the Su-33.

In the case of India—much like Russia itself—the country decided to select the MiG-29K for its carrier.

Though there is some news that Russia’s fleet of Su-33s is receiving upgrades, it is hard to know for sure the future of this aircraft. With the Admiral Kuznetsov’s perpetual problems and the incoming MiG-29K, this fighter may be sidelined for good.