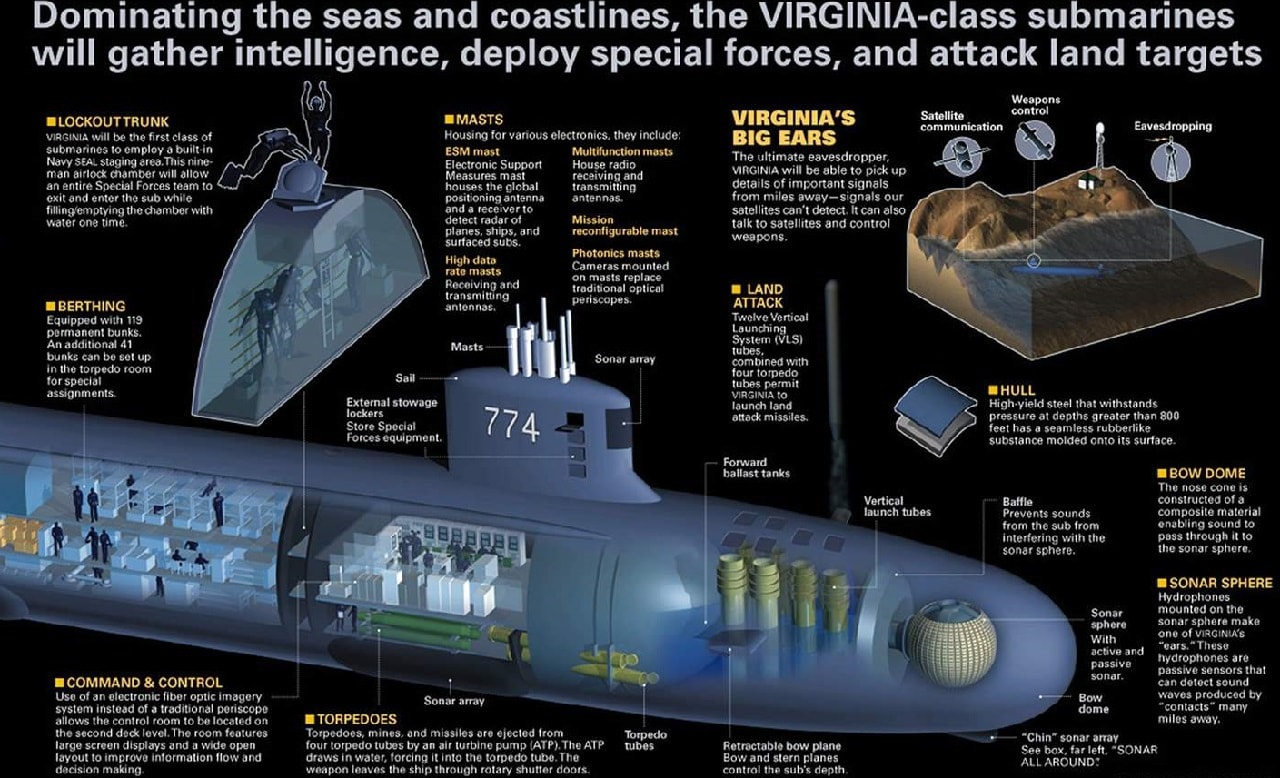 “Den carry me back to ole Virginny/To ole Virginny shore,/Oh, carry me back to ole Virginny,/To ole Virginny shore.” Thus goes the chorus to “Oh! Carry Me Back to Ole Virginny,” a song frequently sung by Confederate soldiers during the American Civil War. Needless to say, the Confederacy is long dead and the Commonwealth of Virginia has long since rejoined the Union. Now the state’s name is proudly bestowed upon a class of warship that defends U.S. interests far beyond the shore, and beneath the waves: the Virginia-class nuclear-powered attack submarines (SSNs). This article will focus on the Block V variant of the Virginia-class (SSN-774) boats.

Origin of the Virginias

The Virginias are the U.S. Navy’s newest generation of SSNs. They were preceded by the 62 boats of the Los Angeles-class, which were commissioned between 1976 and 1996, and the three ships of Seawolf-class, which entered service between 1997 and 2005. According to a Congressional Research Service report published last month, the Navy began procuring Virginias in FY1998, with a total of 36 procured through FY2022. Virginia-class boats have been procured at a rate of two per year since FY2011.

The Virginia-class was initially conceived as a cheaper alternative to the larger and pricier Seawolf, which was designed during the Cold War to counter the latest Soviet submarines. The collapse of the USSR left the Seawolf-class an endangered species. Adversary submarine types were mostly canceled, or at least greatly delayed, in the post-Cold War period, and this seemed to leave the high-tech American boats bereft of a mission. Twenty-six of the 29 Seawolf subs originally planned were therefore canceled.

Meanwhile, the smaller and less costly Virginia-class took advantage of new technologies to become a world-leading SSN in its own right.

Bring On the Block V Boats

The first four Blocks of the Virginia-class concentrated on production efficiency and cost reduction. The Block IIIs utilized enhanced construction techniques, while the Block IVs improved availability. But the new Block Vs will have more visible enhancements that will make the boats substantially deadlier.

As noted by H.I. Sutton in a July 2021 article for Naval News, “The latest Block V Virginia Class submarine will greatly increase the number of missiles which can be carried. In effect this will make it a cruise missile submarine (SSGN). Yet it will not take away from this otherwise flexible anti-ship, anti-submarine, intelligence and special forces platform.

“The Virginia Class submarine is already heavily armed. Each boat can carry up to 37 torpedo-sized weapons, such as Tomahawk cruise missiles. Twelve of these slots are in two vertical launch systems (VLS), known as the Virginia Payload Tubes. The new Block V (5) batch of submarines will add 28 more slots in its VLS. This is an increase of 76% of torpedo-sized weapons”

Speaking of Tomahawk cruise missiles, the latest iteration, also known as the Block V, will add an anti-ship capability – the Block Va sub-variant – to its existing land-attack mode. It remains to be seen how these new Tomahawks will compare in effectiveness to the Harpoon, which was specifically designed as a dedicated anti-ship missile. In any event, these Block V missiles are expected to be operational before the first Virginia Block V joins the submarine fleet.

The Virginias will still retain the regular torpedo room, which can carry the latest versions of the Advanced Capability family of heavyweight torpedoes. The Block Vs are also likely to carry the new Hammerhead mine, which will replace the legacy Mk.47 submarine-launched mobile mine and allow for covert deployment of bottom mines. According to the Navy, the Hammerhead would be delivered by underwater drones, and is meant to “detect, classify, and defeat” manned or unmanned submarines.

Sutton adds that the subs will probably carry new hypersonic boost-glide vehicles, noting that they will likely become among the first submarines to carry hypersonic missiles. Given all the seemingly endless and alarming stories about the latest Russian and Communist Chinese developments in hypersonic missiles, that snippet provides at least a small degree of reassurance that the U.S. isn’t totally behind the power curve in that arena.

Last but not least, in addition to all of the aforementioned weaponry packages – which will make the Block V the most heavily armed attack submarine in US Navy history – the Block V Virginias are expected to enjoy significant improvements in their ability to detect targets, thanks to the Large Vertical Array flank sonars. These are in addition to the six ultra-modern Light Weight Wide Aperture Arrays that are placed along the submarine’s side.