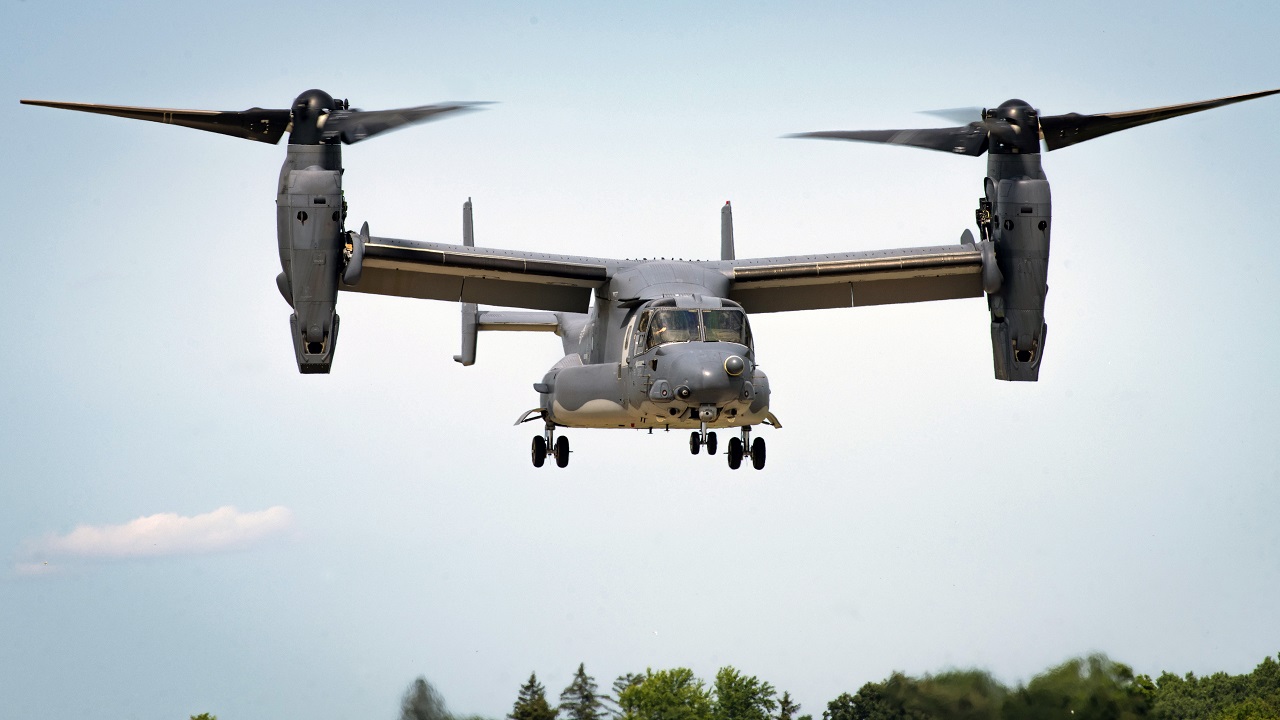 Following the tragic March crash of a Marine Corps Osprey in Bodo, Norway during Exercise Cold Response, an Air Force CV-22 Osprey attached to the 352nd Special Operations Wing landed hard on the island of Senja on August 12 in response to an in-flight emergency involving the clutch.

While the crew was unharmed, the incident turned into a lengthy headache, with U.S. and Norwegian troops and the Norwegian Environmental Protection Office all mobilized to safely retrieve the unlucky aircraft. The incident also once again brought to light the numerous problems that have faced the aircraft.

This month, the 352nd published photos showing a folded-up Osprey rolling down the highway on a Norwegian flatbed truck after being hauled off the island by a crane barge on September 27.

The operation was “demanding,” Royal Norwegian Air Force Command Sergeant Major Odd Helge Wang said in a statement published by the wing. “The challenge [was how] shallow [the area was], and the machine weighs 20 tons.”

Add to that the protected environmental status of Senja – described, for its wild beauty, “like Scotland on steroids,” – and you have a true headache. Beyond the island’s rocky granite coastline are 600-year-old twisted pines, valuable cultural relics, and preserved habitat for wildlife including elk and birds of prey.

Air Force Times reported that the Norwegian government decided to build a narrow wooden road from the green field where the aircraft first landed to the shore in an effort to minimize environmental damage. Then the barge would navigate the shallows to get it out.

Bad weather also delayed the removal effort, according to the Air Force release. And despite how delicately the removal crews worked, they weren’t able to leave things exactly as they found them.

“[We’ve brought] 430 tons of equipment in to carry this out, so there will be some wear and tear,” Wang said in the release. “We have tried to do everything as gently as possible.”

The aircraft is now in a hangar at an unidentified base in Norway, Air Force officials said, while maintenance crews repair it. Once it’s again airworthy, it will fly back to its home base in the United Kingdom.

A number of problems

In response to the Senja emergency landing and another unidentified clutch incident, the Air Force grounded all 52 of its CV-22 Ospreys, Breaking Defense reported. The tiltrotor aircraft did not return to flight status until September 2.

While the Marine Corps opted not to ground its own MV-22 fleet, and a command investigation into the March crash found pilot error to blame, the Air Force clutch issue and related mishap raise new questions about the safety of a long-controversial airframe.

The clutch problem itself has a long and troubling history with both services. Military.com reported that there have been 15 clutch-related mishaps dating back to 2010, 10 of them on Marine Corps Ospreys.

As the publication revealed through interviews with aircrew who encountered a “hard clutch engagement” in 2017, the issue means the clutch fails to interact properly with the Osprey’s second engine after the first one fails. That has led to engine overload and flameout and shredding of the gearboxes – issues that can cause millions in damage and force an emergency landing or a crash.

In a Military.com interview at the Air Force Association’s annual conference, Lt. Gen. James C. Slife, the head of Air Force Special Operations Command, confirmed something akin to that had happened in Norway.

“We had one of these hard clutch engagement events; the aircrew put it down,” Slife said, as reported by the publication. “And so we’re in the midst of a recovery process to get that airplane to a place where we can swap out the engines and the gearboxes and all the things that need to be replaced.”

For the Osprey, hard clutch engagement is one of several issues unique to the airframe that can cause it to fall out of the sky. The tilt-rotor design that allows for vertical takeoff and landing (VTOL), like a helicopter, and horizontal flight, like an airplane, also makes it particularly sensitive to certain environmental and aerodynamic conditions.

The entire history of the Osprey is colored by an April 8, 2000 crash outside Tucson, Arizona, before the aircraft had even entered service, that resulted in the deaths of all 19 Marines onboard. That crash was determined to be the result of Vortex Ring State, a condition to which all rotorcraft are prone, which occurs when a ring-shaped air pattern surrounds the rotors, resulting in a severe loss of lift. It can happen when the Osprey enters vertical descent too quickly, and at the time of the Arizona crash, the flight parameters were not fully clear.

On May 17, 2015, another Marine Corps Osprey crashed at Marine Corps Training Area Bellows, Hawaii, killing two Marines and injuring 20 more. This crash, which I reported on for Military.com, was the result of a “brownout,” or loss of visibility due to a swirling cloud of dust and dirt in the landing zone. But a command investigation also revealed that sand had actually entered the engine itself and essentially turned to glass, choking it until it became inoperable. A pilot who spoke with me about that investigation pointed out that the Osprey takes in a higher volume of air than comparable rotorcraft, making it more vulnerable to these conditions. Ultimately, the Naval Air Training and Operating Procedures Standardization (NATOPS) manual was updated to further limit acceptable hover conditions in the wake of this tragedy.

With the hard clutch engagement issue still lacking a permanent solution and new investment in future VTOL technology raising the old specter of Vortex Ring State, the unanswered questions about the Osprey and how military leaders are keeping crews safe are becoming hard to ignore.