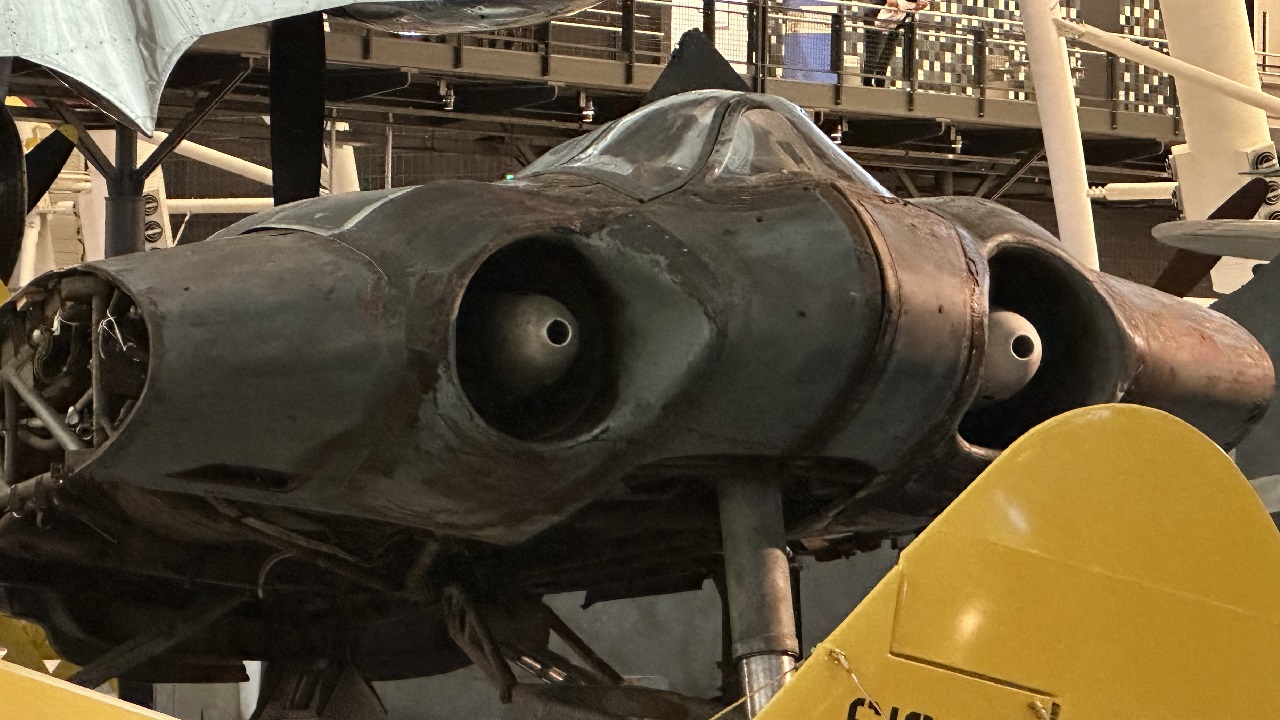 In preparation for writing this story, while visiting the National Air and Space Museum outside of Washington, DC, we did our best to get as close to the Horton Ho 229 that is on display. Sadly the plane is set way back, so video was impossible to take. However, we do have some original photos below and above from our visit. Check out other encounters with other planes up close from our visit like the SR-71, X-35, Bell X-1, and the NASA Space Shuttle Discovery.

In the summer of 2020, then-President Donald Trump took some heat from reporters after it appeared that he believed the Lockheed Martin F-35 Lightning II was actually invisible to the naked eye – which of course, it most certainly isn’t. “Stealth” aircraft can be seen, but the technology is meant to significantly reduce their radar signature.

None of that was particularly important until the British actually developed radar just prior to the Second World War. Dubbed by Winston Churchill as “castles in the sky,” radar stations on the English coast were meant to help provide the Royal Air Force extra time to respond to approaching German bombers.

It proved so successful that German designers looked to counter radar.

Two German brothers, Walter and Reimar Horten, were among the teams employed with such a task. They led a small of workers that developed a radical new aircraft, the HoIX. The prototype was built with solid plywood wing skins, while the production version was to have been skinned with a sandwich material comprising of thin plywood sheets, and a core made of saw-dust, charcoal, and glue. It may sound especially “high-tech,” but the material was actually developed expressly to absorb radar waves.

The Hortens had realized that the metal skins of modern aircraft of the era reflected the radar waves, and sought to develop radar-absorbing materials. Though it remains questionable whether the material would have been effective, even against the less sophisticated radars of the day, the shape of the aircraft was also notable.

They had conceived of a flying wing!

Their efforts came too late in the war, by which time other miracle weapons were being developed by the Nazis. In fact, the Hortens didn’t get the “red carpet” treatment that was being provided to the German rocket scientists. As a result, their efforts didn’t actually get all that far. It was only in the closing months of the war – when Nazi Germany was all but defeated – that the brothers began work on the Horten Ho 229 jet fighter.

Yet, whereas other Nazi “super weapons” barely made it off the drawing board, multiple prototypes of the Horten No. 9 (H.IX) were actually produced. The first prototype was completed as a glider, the second and third were single-seat aircraft, and the fourth was intended to be a two-seater.

The Horten Ho 229 is now considered to be among the first “stealth aircraft,” as its flying wing concept would have made it less visible to radar than a conventional aircraft of its size. The aircraft would have had about 80 percent of the visibility presented by a fighter such as the Messerschmitt Bf 109 despite having a larger wingspan.

Even as development continued the Ho 228 V3 Never flew. Even if the aircraft had been perfected, it likely would have made little difference as Germany could have never produced it in significant numbers.

After the war, a number of Horten designs were examined by the Allies, initially the British and then the United States.

The U.S. Air Force had studied the airframe and several early Horten gliders after the war, and then donated it to what became the National Air and Space Museum in 1952. Preservation work only began in 2011. It is on display after years of work to restore what remained, but as noted above, really hard to see as it is not positioned very prominently and we were unable to take any video that would do the plane any justice. We did take the best photos we could, shown above and below. 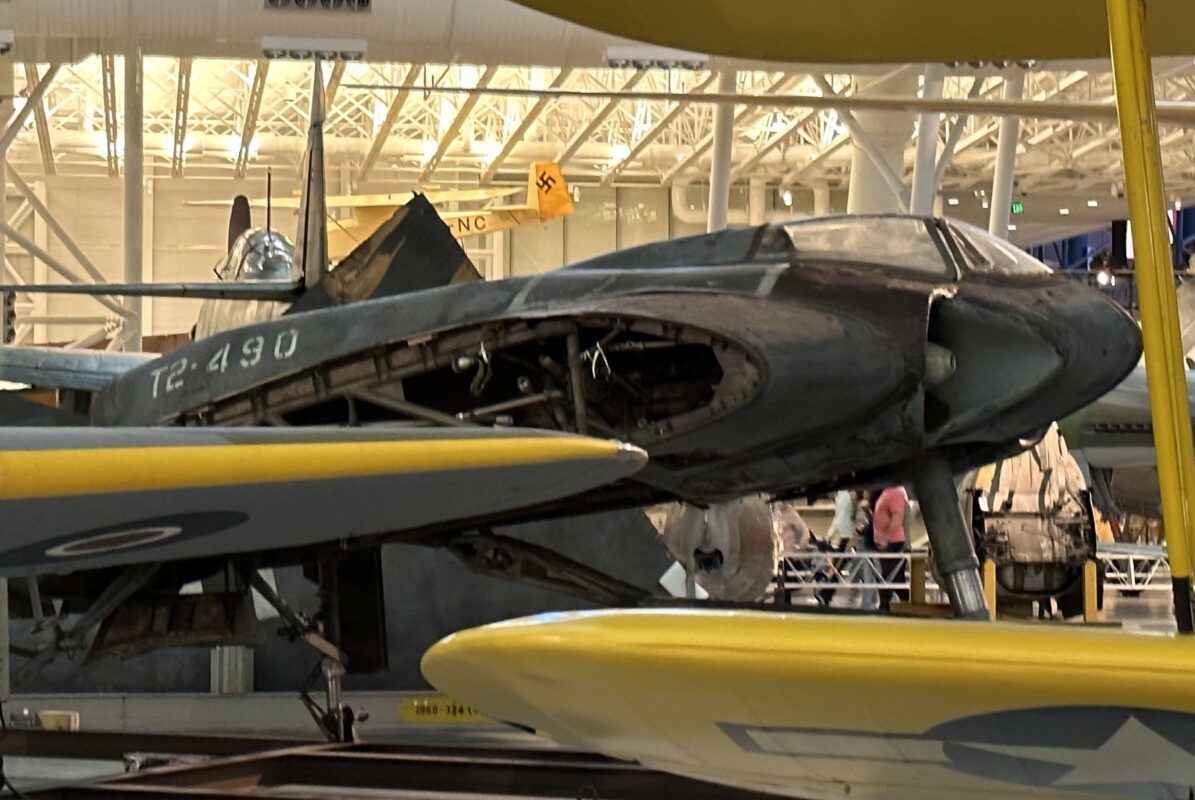 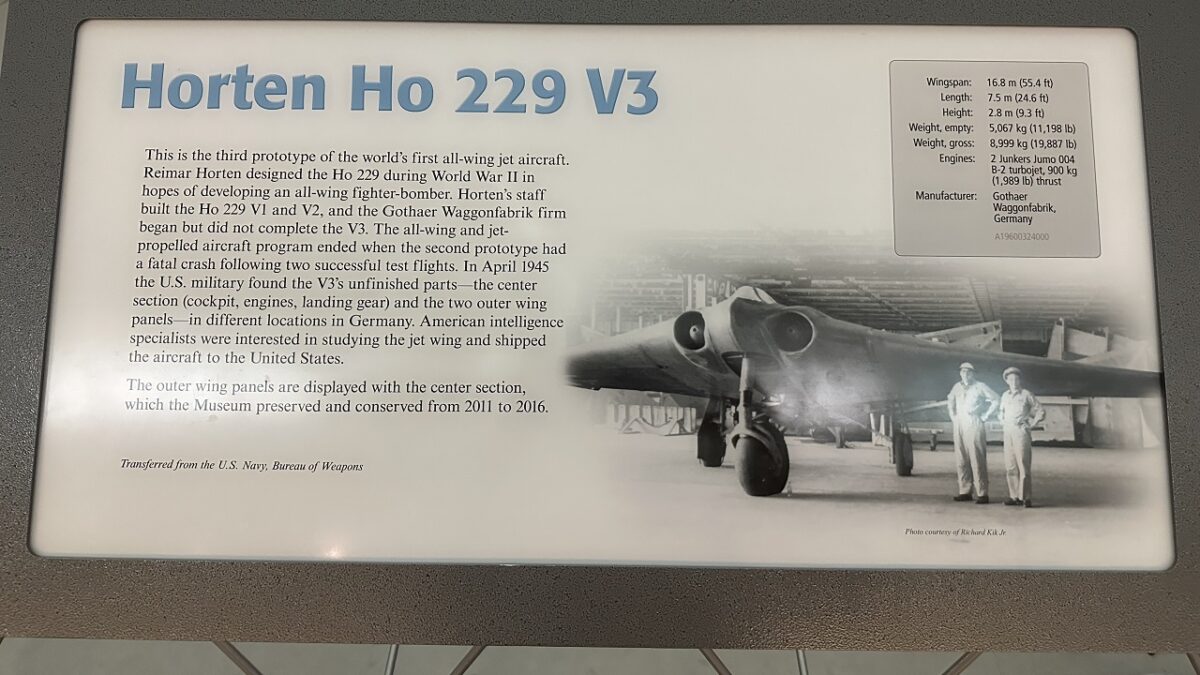 As for the Horten brothers, they had offered their talents to the British and American efforts to develop an aircraft based on their concept but were rebuffed. As Germany was banned from constructing any aircraft, Reimar Horten took his knowledge to Argentina. While he continued to work on his flying wing concept, nothing much ever came of it and he died in 1994.

The United States Air Force did explore the concept, as Northrop built its N-9M, a one-third scale all-wing prototype. That was later used in the development of the Northrop XB-35 and YB-35, experimental heavy bombers build for the United States Army Air Forces shortly after World War II. However, the concept was put to rest until the 1970s when Northrop Grumman began the development of the B-2 Spirit.