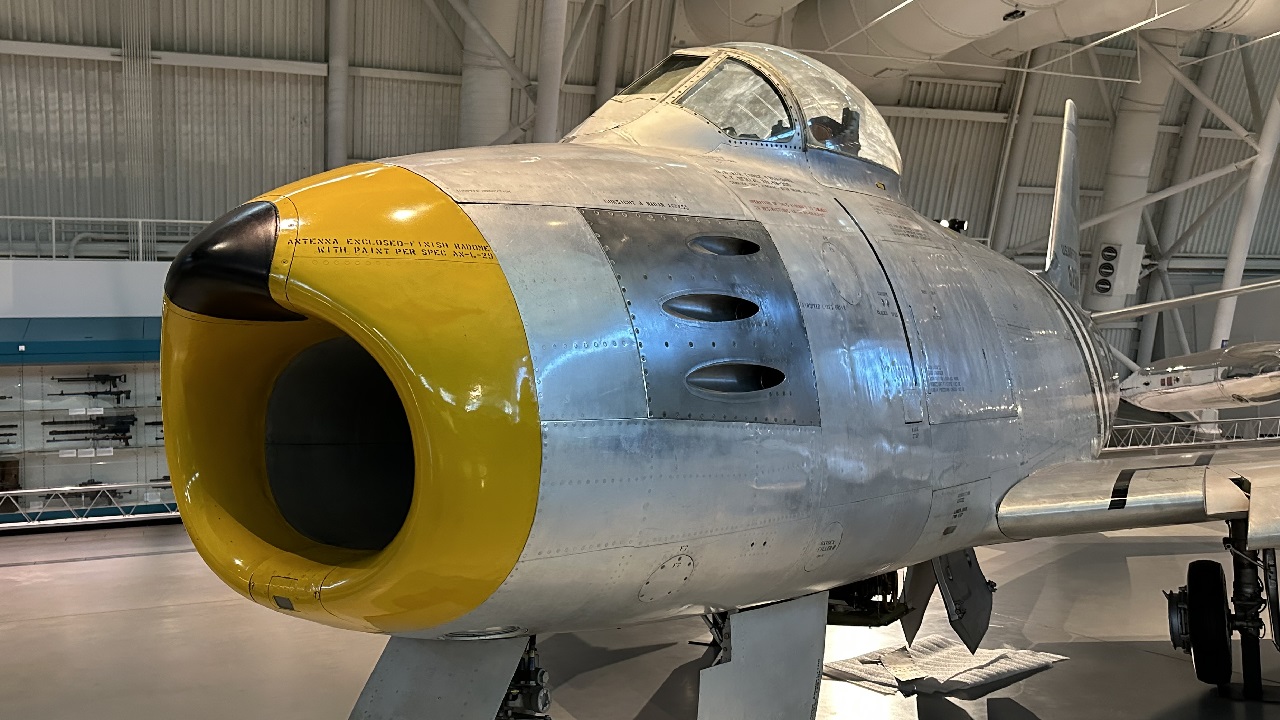 The 19FortyFive team back on October 1, 2022, went to the National Air and Space Museum to film some amazing new footage of aircraft such as the SR-71, NASA Space Shuttle Discovery, and the Bell X-1. You bet we didn’t forget about the F-86 Sabre. Check out our original video of the F-86 and the photos below.

Certainly the finest jet fighter of its generation, the North American F-86 Sabre cut through the skies over Korea – making it one of the most famed combat aircraft of its day, if not the whole period since the Second World War. It went on to enjoy unprecedented success in a variety of combat roles and with dozens of different nations around the world – serving for close to 50 years.

Between 1947 and 1957, more than 9,800 F-86s were manufactured, making it the most prolific jet fighter ever produced. More than 5,500 Sabre day fighters were built in the U. S. and Canada, while the F-86 was also employed in the air forces of twenty other nations, including West Germany, Japan, Spain, Britain, and Australia.

Development of the F-86 Sabre

The Sabre was developed under the direction of chief designer Edgar Schmued, who had also designed the P-51 Mustang. It was derived from the design of the straight-wing FJ Fury series of Navy aircraft.

It was advanced in other ways.

The pilot sat below an aft-sliding canopy on a North American ejector seat in a pressurized cockpit with air conditioning, while the display was dominated by a screen for the fire-control system. The forward-located cockpit also provided a good field of vision. In addition, the aircraft also featured a unique undercarriage where the nosewheel unit retracted backward to lie in the forward fuselage, while the mainwheels retracted inwards to lie in the center fuselage.

The Sabre made its initial flight in October 1947, and the first production model flew the following May, while less than a year later, in September 1947, an F-86A set a new world speed record of 670.9 mph.

F-86A contained a booster control system that called for the pilot to do part of the work of controlling the aircraft, whereas the newer system added full power-operated control for better maneuverability at high speeds. The aircraft was steadily upgraded and improved. The F-86D interceptor variant was the first combat aircraft to introduce the new concept of gunless collision-course interception directed by radar and autopilot.

Designed as a high-altitude day fighter, the Sabre was subsequently employed as an all-weather interceptor and even fighter/bomber. It was armed with six .50 caliber machine guns, which could be used in visual combat with the enemy – making it the last true “dogfighter” to be developed for the United States Air Force.

During the Korean War, the F-86 often engaged the Soviet-built MiG-15, and the Sabre has been credited with being largely responsible for turning the tide of the air war in favor of the United States over northwest Korea, an area that became known as “MiG Alley.”

On December 17, 1950, Lt. Col. Bruce Hinton of the U.S. Air Force 4th Fighter Group became the first F-86 pilot to shoot down a MiG. He certainly wasn’t the last. In fact, it was really no contest, and by the end of the conflict, F-86 Sabre pilots had shot down 792 MiGs, while just 76 F-86 Sabres were lost – a kill ratio of more than 10 to one! Hinton’s aircraft is now in the collection of the National Museum of the United States Air Force. 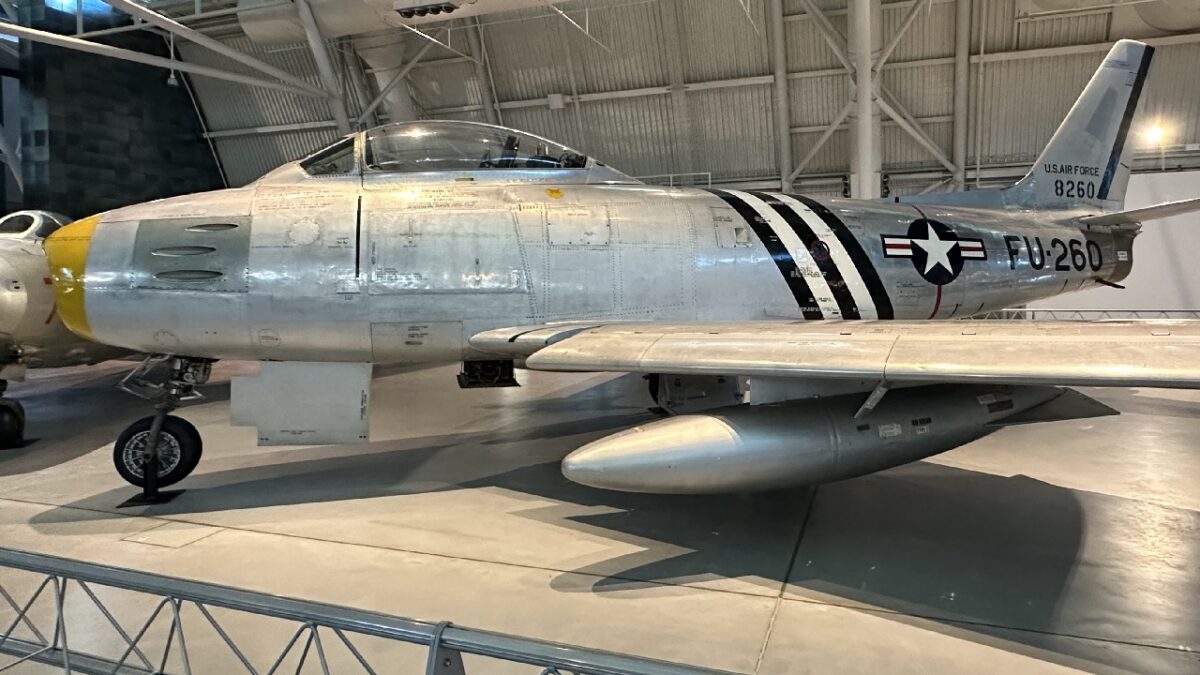 The Smithsonian’s National Air & Space Museum has another Sabre in its collection an F-86A that saw combat during the war. It flew most of its missions from Kimpo Air Base near Seoul and bears the markings of the 4th Fighter Wing, the first F-86 unit in Korea. 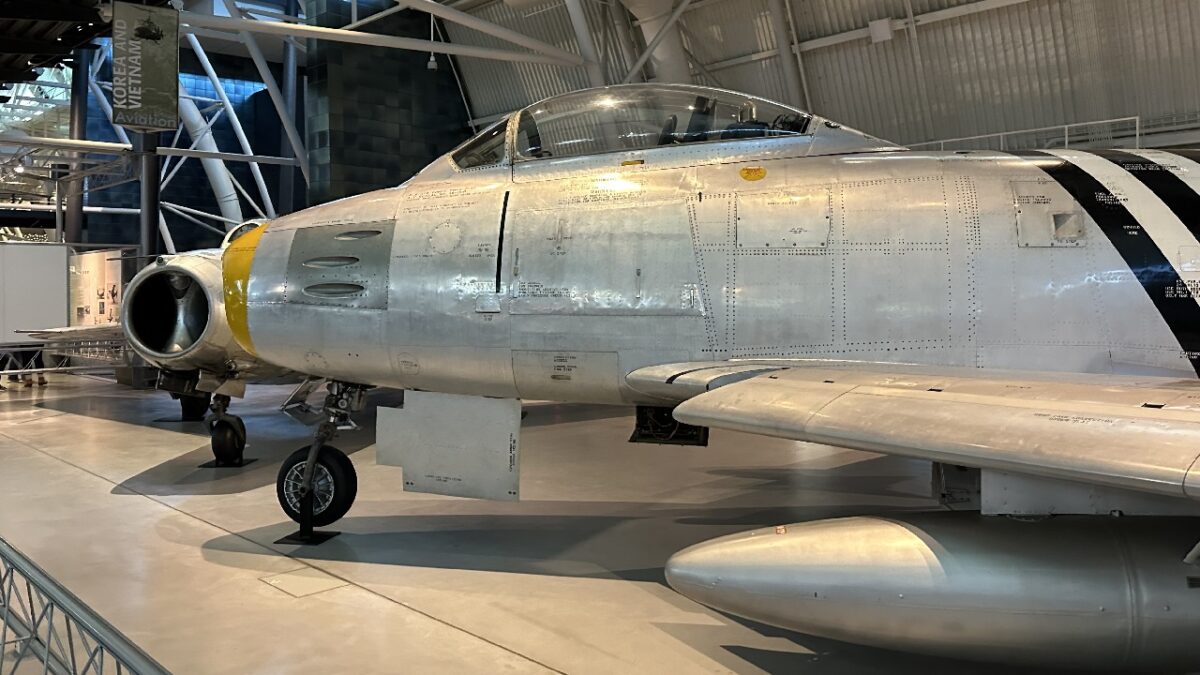