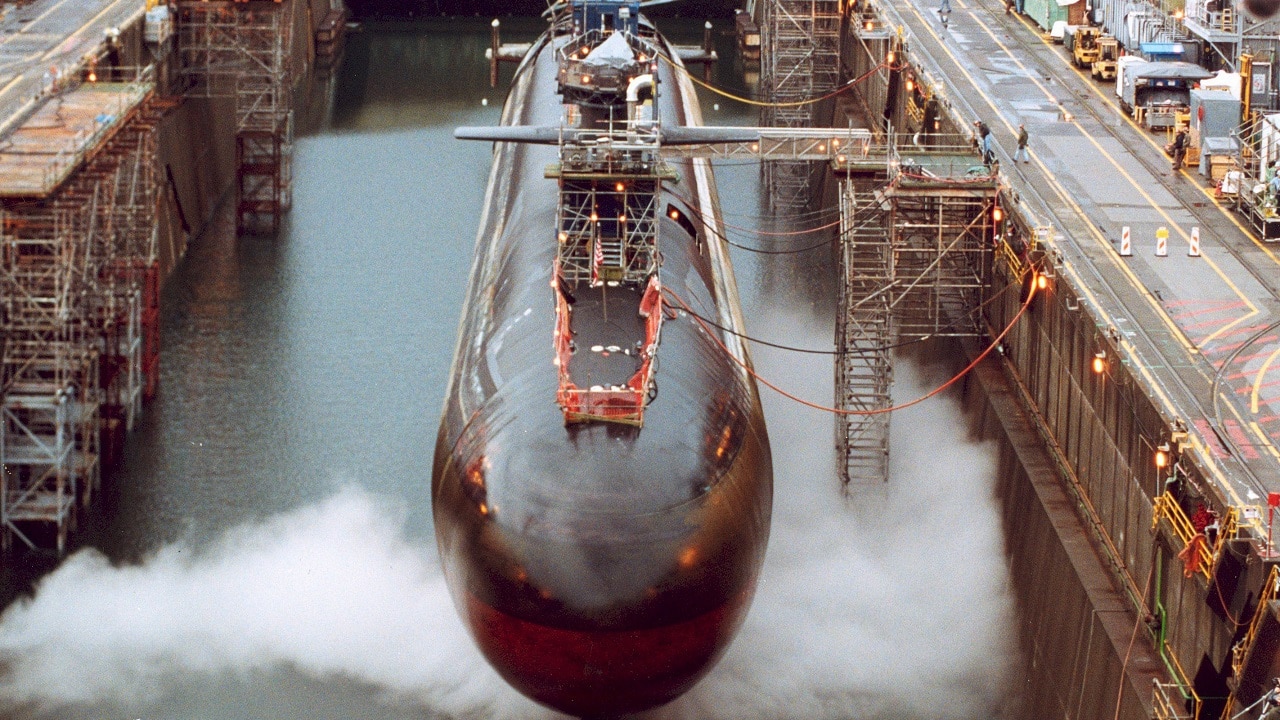 Puget Sound Naval Shipyard, Wash. (Aug. 14, 2003) -- USS Ohio (SSGN 726) is in dry dock undergoing a conversion from a Ballistic Missile Submarine (SSBN) to a Guided Missile Submarine (SSGN) designation. Ohio has been out of service since Oct. 29, 2002 for conversion to SSGN at Puget Sound Naval Shipyard. Four Ohio-class strategic missile submarines, USS Ohio (SSBN 726), USS Michigan (SSBN 727) USS Florida (SSBN 728), and USS Georgia (SSBN 729) have been selected for transformation into a new platform, designated SSGN. The SSGNs will have the capability to support and launch up to 154 Tomahawk missiles, a significant increase in capacity compared to other platforms. The 22 missile tubes also will provide the capability to carry other payloads, such as unmanned underwater vehicles (UUVs), unmanned aerial vehicles (UAVs) and Special Forces equipment. This new platform will also have the capability to carry and support more than 66 Navy SEALs (Sea, Air and Land) and insert them clandestinely into potential conflict areas. U.S. Navy file photo. (RELEASED)

This past weekend, the Naval Order of the United States held its monthly movie night, and the film of choice was the WWII action movie Operation Pacific, starring John Wayne. That inspired me to write this article, naming my highly subjective Top 5 List of Favorite Submarine Movies. It strikes me as a fun follow-up to all the 19FortyFive articles I’ve written on various nations’ real-world submarine forces. Plus, I must admit a bit of familial bias, as my late paternal cousin Clinton Orr was a WWII submariner.

This aforementioned film is what made me a fan of submarine movies in the first place, way back in circa 1981 at age 6. In a case of art imitating life, “The Duke” plays a character named Duke, more specifically Lt. Cmdr. Duke Gifford, the executive officer and later commanding officer of the USS Thunderfish. In this movie, Duke wages three battles: The first is against the Imperial Japanese Navy and merchant marine. The second is an internal struggle with faulty torpedoes, which mirrored the real-life problem that WWII Vice Adm. Charles Lockwood had to contend with during the early years of the Pacific War. Finally, he was trying to win back the affections of his ex-wife, Navy nurse Lt. j.g. Mary Stuart (portrayed by the lovely Patricia Neal). The film co-stars Wayne’s former USC Trojan football teammate Ward Bond.

Some of my friends who were actual submariners (like retired Lt. Cmdr. Chuck Micele) nitpick this movie for technical inaccuracies, but I’ll let that slide for now. The movie stars Oscar laureates Gene Hackman and Denzel Washington, and it also features a slew of now-famous actors before they were household names: James Gandolfini in his pre-Sopranos days, Viggo Mortensen before the Lord of the Rings series, Rocky Carroll before NCIS, and Rick Schroeder in one his first grown-up roles. In this film, set aboard the Ohio-class ballistic missile submarine USS Alabama, the newly-minted executive officer, Lt. Cmdr. Ron Hunter (Washington) stages a mutiny to prevent his battle-hardened, old-school skipper, Capt. Frank Ramsey (Hackman) from launching nuclear missiles against rebel forces loyal to a Russian ultranationalist – loosely based on real-world bogeyman Vladimir Zhirinovsky – before confirming his orders to do so. The chase scene with the renegade Russian Akula hunter-killer submarine is especially thrilling, and my fellow former international relations majors will dig the von Clausewitz/”fog of war” discussion scene.

Between its $200.5 million worldwide box office gross and the fact that it’s based upon the late great Tom Clancy’s bestselling first novel, this is undoubtedly the most popular submarine movie ever made. I’m admittedly partial to it because it stars Sir Sean Connery, my all-time favorite actor, as Capt. 1st Rank Marko Ramius, skipper of the titular Typhoon-class submarine. With an all-star cast that includes Alec Baldwin, James Earl Jones, the late Richard Jordan, Scott Glenn, Anne Archer, former U.S. Sen. Fred Dalton Thompson (R-TN), and Joss Ackland, the film keeps viewers in suspense until the very end. The film is directed by John McTiernan, also renowned for directing the original Die Hard (you know, the ultimate Christmas movie).

This one co-stars Harrison Ford and my #2 all-time favorite actor, Liam Neeson. Interestingly, the aforementioned Joss Ackland has a supporting role in this film as well. As I noted in my article about the real-life K-19 incident of July 1961, the movie has its typical fair share of Hollywood embellishments, but on the whole it is faithful to the true story of how the Soviet Union’s first nuclear submarine ran afoul of a malfunctioning nuclear reactor on its maiden voyage, and how the crew had to race to save the ship and prevent a nuclear disaster, sacrificing several of their own lives in the process. Harrison Ford’s Capt. 2nd Rank Alexei Vostrikov character actually bears a fairly close facial resemblance to the boat’s real-life skipper, Capt. 1st Rank Nikolai Vladimirovich Zateyev. Perhaps because of the historical events depicted, K-19: The Widowmaker has arguably the most poignant ending of all the films on this list.

I suppose this is the most obvious choice for a Top 5 Submarine Movies List. It is easily the most critically acclaimed of the bunch with five Academy Award nominations, including Best Director and Best Adapted Screenplay, both to Wolfgang Petersen. If you haven’t seen it, do yourself a favor and go with the Director’s Cut with the original German dialogue with the English subtitles, not the English-dubbed version. The utterly harrowing depth charge attack scene alone – and resultant bout of temporary insanity suffered by Obermaschinist Johann (Erwin Leder) – is worth the price of admission. Jürgen Prochnow has the lead role as the Kapitänleutnant in command of the U-boat.

Mea culpa. mea culpa, mea maxima culpa, I know, I know, I omitted several other excellent submarine movies from this list, from Run Silent, Run Deep to Grey Lady Down, The Enemy Below, and Operation Petticoat. Hey, them’s the breaks when you have to narrow it down to five entries. So, if I’ve left your favorite cinematic submarine off the list, please feel free to throw your proverbial rotten tomatoes at me in the Comments section!