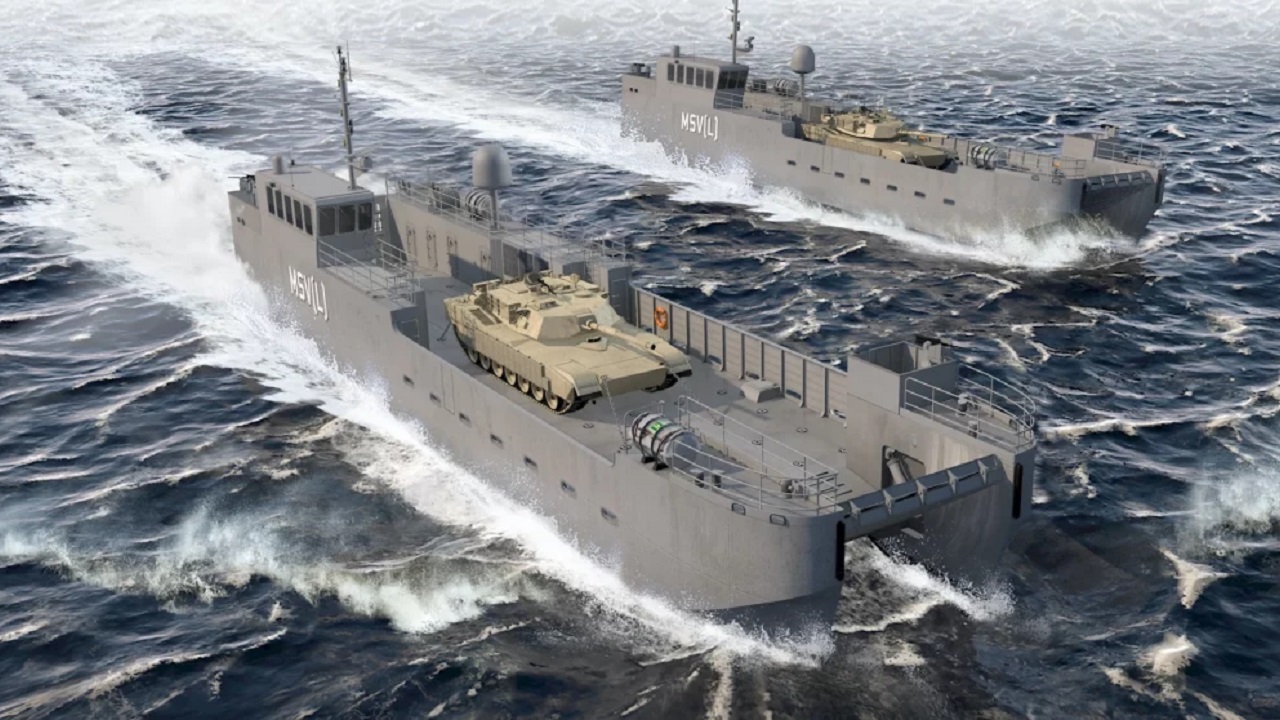 While the Navy’s struggle to build out new ship classes for future conflicts makes headlines, the Army is quietly revamping its own little-known fleet – one that has at times had more vessels than the Navy’s, albeit smaller ones.

In October, the Army launched the first prototype of the new Maneuver Support Vessel (Light), or MSV(L), a cargo watercraft that’s set to become the service’s newest boat class. The 117-foot MSV(L), made by Vigor Industrial, has been in development since 2017 when the Army inked a $980 million, 10-year contract with the company. It’s set to replace the Army’s less-capable Vietnam-era Landing Craft Mechanized-8 (LCM-8), which is nearing the end of its service life. And it’s getting ready to enter service as the Army anticipates needing its boats more than ever before.

General Charles Flynn, commanding general of U.S. Army Pacific, told an audience at the Association of the United States Army’s annual meeting in October that the service is working to activate more vessels in the region to support Pacific-based Army Prepositioned Stocks, or warfighting gear stockpiles that stand ready for combat. He added that the Army likely needed more boat companies to meet the logistics challenges of supporting allies in the Pacific and establishing a presence through its Pacific Pathways initiative, which promotes exercises with regional allies.

“There are some sustainment capabilities that we’re going to need … so that we can create conditions for operational endurance of the joint force,” General Flynn said. “We need more composite watercraft companies. So that’s why we’re wargaming … to find out where those gaps are, so that we can go back to the Department of the Army and the Department of Defense and say, ‘Hey, here are the gaps.’”

Perhaps most impressively, MSV(L) is able to operate safely with a full cargo load in conditions up to Sea State 3, which entails choppy waves at heights up to four feet. This makes it more useful and effective in littoral regions and narrow waterways, increasing its value in the Pacific.

“The MSV(L) utilizes a triple waterjet configuration which significantly enhances maneuverability in shallow water,” Rogers said in a statement provided to Sandboxx.

The new support vessel will also feature a new crew configuration. Instead of LCM-8’s single four-member crew, it will have two crews of four, for a total of eight. This allows the new vessel’s crew to support operations around the clock and perform functions that didn’t exist when the LCM-8 entered service, like cyber ops, digital intelligence, surveillance and reconnaissance, and operation of MSV(L)’s new-and-improved weapons systems.

While LCM-8s are mounted with 2 .50-caliber M2 Browning machine guns, MSV(L) will have two remotely operated weapons stations, each capable of accommodating a .50-cal or a Mark-19 40mm automatic grenade launcher, according to a report from Naval News.

The Army Needs its Boats

This is the first boat the Army has acquired in more than two decades, officials said. The service has 132 cargo and logistics watercraft, and several thousand soldiers tasked with manning and operating them. By comparison, the Navy now has 242 active ships in commission, according to the U.S. Naval Vessel Register. While the Army’s fleet has dwindled in recent years, it once had about 300 hulls in service.

In 2019, the Army moved to divest a significant number of its vessels, moving about half of its Landing Craft Utility platforms to mothballs and closing down eight reserve boat units. These plans were paused later that year after Congress intervened and called for a study on the effort.

In 2021, the service’s attitude toward its boats appeared to shift. Two Army officers leading the service’s 87th Combat Sustainment Support Battalion published a “lessons learned” essay on Army.mil describing how they oversaw a 56-day, 10,000 nautical mile voyage of two logistics support vessels that included a Suez Canal transit. It was the first LSV transoceanic voyage in U.S. Central Command, they said, since 2011.

“This new shift of Army watercraft allocation is being driven by adapting to large-scale combat operations (LSCO) and the National Defense Strategy,” they wrote.

“LSVs have the unique capability to bypass countries when logisticians can use the Sea Lines of Communications. But understanding port locations and country diplomatic clearance requirements was also important at the operational and tactical level. During heightened tensions, the LSVs quickly responded to support movement of equipment and critical munitions to support [U.S. Army Central Command] and [U.S. Navy Central Command],” the two officers added.

With up to 36 MSV(L) boats set to enter the fleet amid a newfound appreciation for the capability, Army officials are hailing the prototype launch milestone.

“Launching the MSV(L) prototype, a brand-new, first-in-class vessel is a major achievement for us to celebrate,” Colonel Beth Behn, the Army’s chief of transportation, said in a statement.

“The overall team has surmounted several hurdles having to do with COVID-19-related workforce and supply-chain issues. I couldn’t be more proud of this partnership to become one step closer to providing Army Mariners the world over a truly modernized capability,” she added.

MSV(L) is next set to enter builder’s trials, followed by the Army’s extended acceptance testing process that will include dockside and underway tests to ensure the aluminum vessels meet contract requirements, Rogers said.

The Army expects to make a low-rate initial production decision early next year, and take delivery of the first MSV(L) prototype at Joint Base Langley-Eustis, VA, headquarters for Army mariners, in 2024.

Want More 19FortyFive articles, news, and analysis on the top military, defense, national security, as well as politics and economics news? Make sure to follow us on Google News, Flipboard, YouTube, Facebook, Twitter, and Linkedin. Also, please don’t forget to sign up for our newsletter here. You can also find our code of publishing ethics and standards here. And, as always you can email us with any questions or contact us: [email protected].