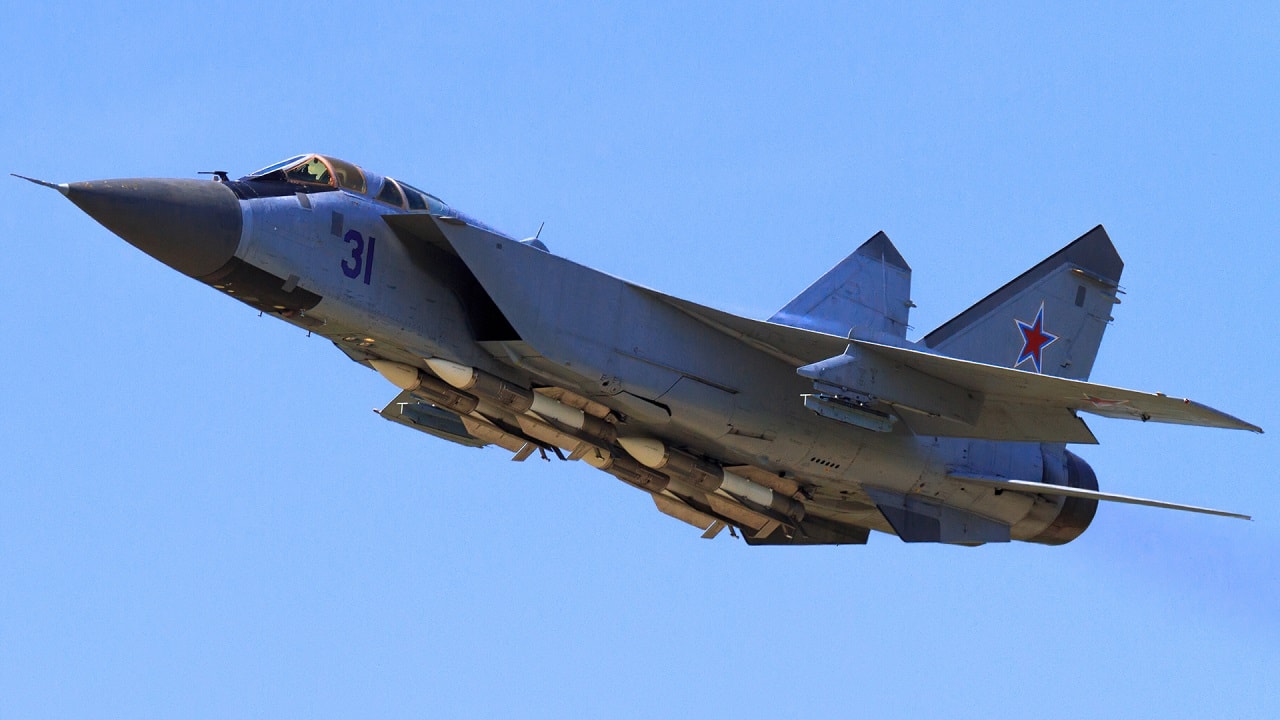 In the 40-year-old interceptor’s first use in combat (Kazakhstan is the type’s only other operator), Russia’s Foxhounds have likely downed multiple Ukrainian combat aircraft, according to the report’s authors Nick Reynolds and Drs. Justin Bronk and Jack Watling.

“Russian high-altitude fighter CAPs with Su-35S and more recently with Mig-31BM interceptors are continuing to shoot down significant numbers of Ukrainian ground attack aircraft near the frontlines from distances that render them all but immune to return fire.”

That’s reportedly made possible by using large, very long-range hypersonic air-to-air missiles: the R-37M (NATO codename AA-13 Axehead-B) accelerates up to six times the speed of sound (few fighters go much faster than Mach 2) and can engage slower targets up to a staggering 250 miles away. Each measures 4 meters long and weighs 1,320 pounds

The report states: “The VKS [Russian aerospace force] has been firing up to six R-37Ms per day during October, and the extremely high speed of the weapon, coupled with very long effective range and a seeker designed for engaging low-altitude targets, makes it particularly difficult to evade.”

The report’s findings were derived from interviews with four senior aviation commanders and three senior ground-based air defense commanders from the Ukrainian Air Force, as well as their personal analysis of recovered R-37M missile fragments.

This arguably constitutes the first combat use of a Very Long Range Air-to-Air Missiles (VLRAAM) effective at distances exceeding 150 miles. Western air forces primarily don’t field VLRAAMs yet because their long reach may not be that useful against an agile jet fighter, which, if alerted, may have ample opportunity to evade.

Guiding such a weapon is tricky, too—the Axehead relies on inertial navigation, enhanced by corrections transmitted from the launching fighter as it flies in an arc toward the target to maximize range. Only once it closes within roughly 18 miles can its internal dual-band radar seeker hope to acquire the target for more precise terminal guidance.

The low-flying ground attack jets falling victim are Ukraine’s Su-25 Frogfoots and its Su-24 Fencer supersonic bomber. The former’s slower maximum speed (about 600 miles per hour, or Mach .79) means its ‘escape zone’ for outrunning the missile might be limited. The larger, swing-wing Fencer is faster (Mach 1 at low altitude, 1.6 flying high) but has often been deployed on riskier penetrating raids and suffered very heavy losses.

On October 27, Russian state media posted an interview with a MiG-31 pilot who claimed to have downed a Ukrainian Su-24.  The accompanying video shows MiG-31 Red 24 carrying three R-37Ms and one R-77-1. The Foxhound’s high maximum altitude and speed (approaching three times the speed of sound) can impart a big energetic boost to missiles, making it an excellent complement to the R-37. According to Izvestia, supposedly, the targeted Fencer made evasive maneuvers but then disappeared from Russian radars and was thus considered destroyed. 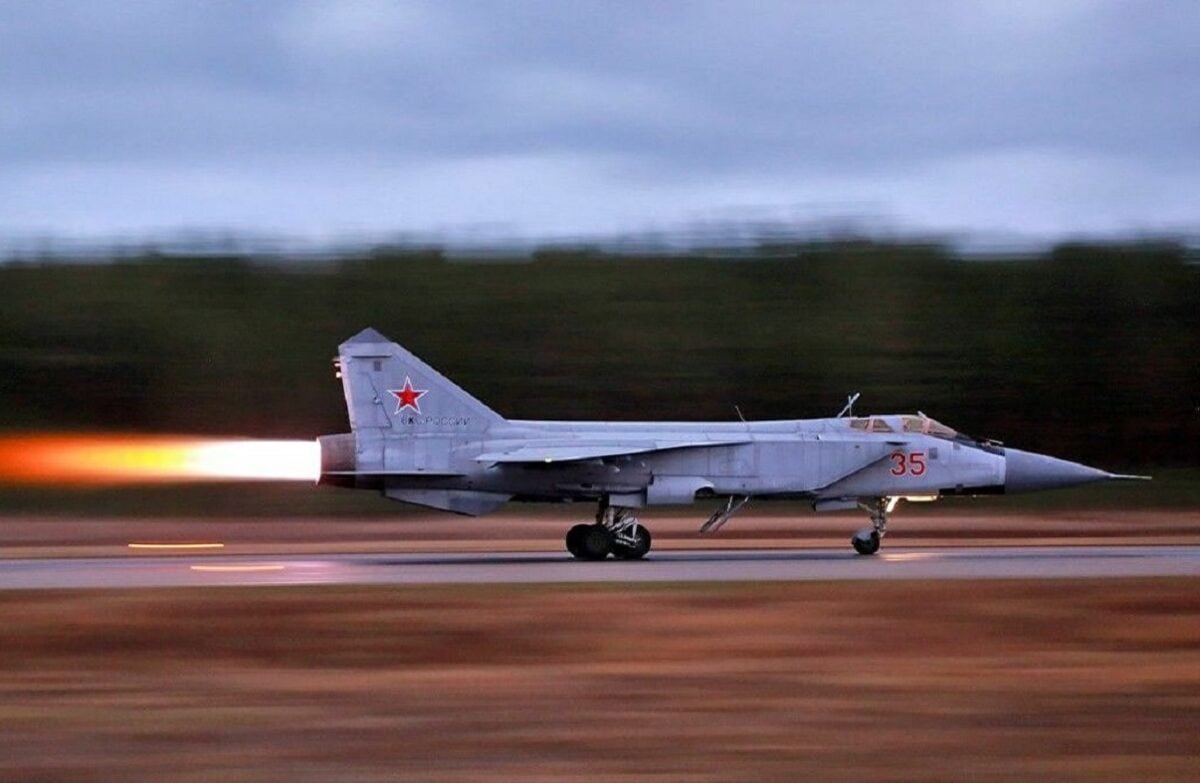 However, the claim should be taken with a grain of salt, along with pro-Russian sources attributing nine more kills to the Foxhound. Russia has claimed to destroy more than twice as many aircraft as in Ukraine’s air force. Like the vast majority of air-to-air claims made by both sides, there isn’t visual evidence confirming the kills.

That lack, and skepticism of the R-37’s usefulness against agile warplanes, are the basis of an article by retired USAF pilot Col. Jeffrey Fischer. He points to the R-37M’s relatively small fins, and argues it is “clearly a limited maneuvering missile” that would be ineffective against Ukrainian combat aircraft.

However, the RUSI report makes the Su-24 downing appear more plausible than before, and may imply additional similar incidents.

According to the RUSI report, Russia has divided up airspace over parts of Ukraine it controls into eight sectors, each of which is patrolled by a rotating combat air patrol (CAP) of two MiG-31BM or Su-35S fighters whose job is to detect and pounce on any approaching Ukrainian jets.

Due to a low availability of Russian aerial refueling tankers (mostly supporting Tu-95 and Tu-160 bombers), each CAP usually can’t remain on station for more than two hours before being replaced with a fresh pair.

Ukraine’s MiG-29 and Su-27 fighters are technically out-classed by the longer-range radars and missiles on Russian jets, so focus instead on intercepting Russian ground attack aircraft and incoming cruise missiles and drones.  (The exception being the first few days of the war, during which Ukrainian ground-based air defenses were moving for their own survival and in large part non-functional. Ukrainian fighters had to take on the full burden of air defense in those early desperate days.) 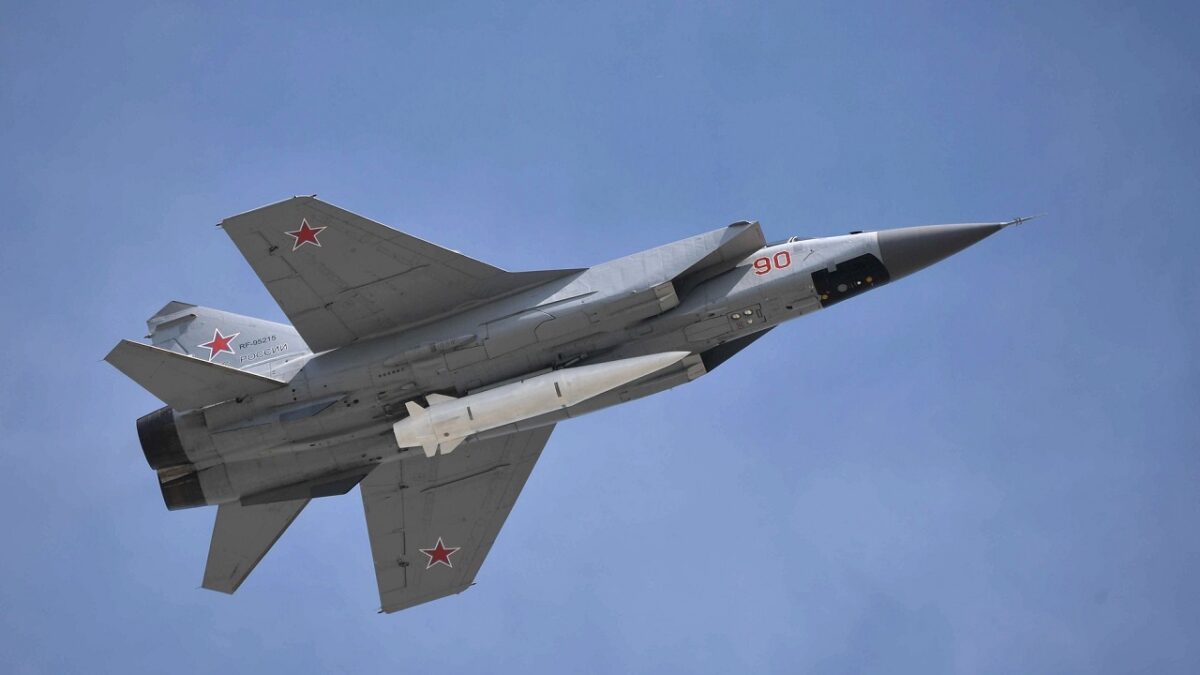 That said, a Russian interview suggests the long-range missile shots do require clearance from an airborne command post (on an Il-22 ‘Coot-B’ aircraft) before firing, likely to avoid friendly fire.

Prior to the report, there were sound reasons to doubt Russia was fielding large numbers of R-37Ms. Russia’s military struggled for years to produce and deploy enough R-77-1 air-to-air long-range missiles intended for general-purpose use, while the R-37M was a larger, more exotic weapon.

Now it seems Russia’s inventory of the R-37M is large enough to expend liberally, even when each individual shot as low odds of a killing a maneuverable combat jet.

By contrast, Fischer speculates the R-37’s increased use might reflect a shortage of the more maneuverable R-77-1 and R-27 missiles.

There are also dubiously-sourced claims that one of Russia’s Su-57 stealth fighters—a type that appears barely active, if used at all, over Ukraine—downed a Ukrainian Su-27 fighter over Belbek, Russia, from a distance of 135 miles using an R-37M. 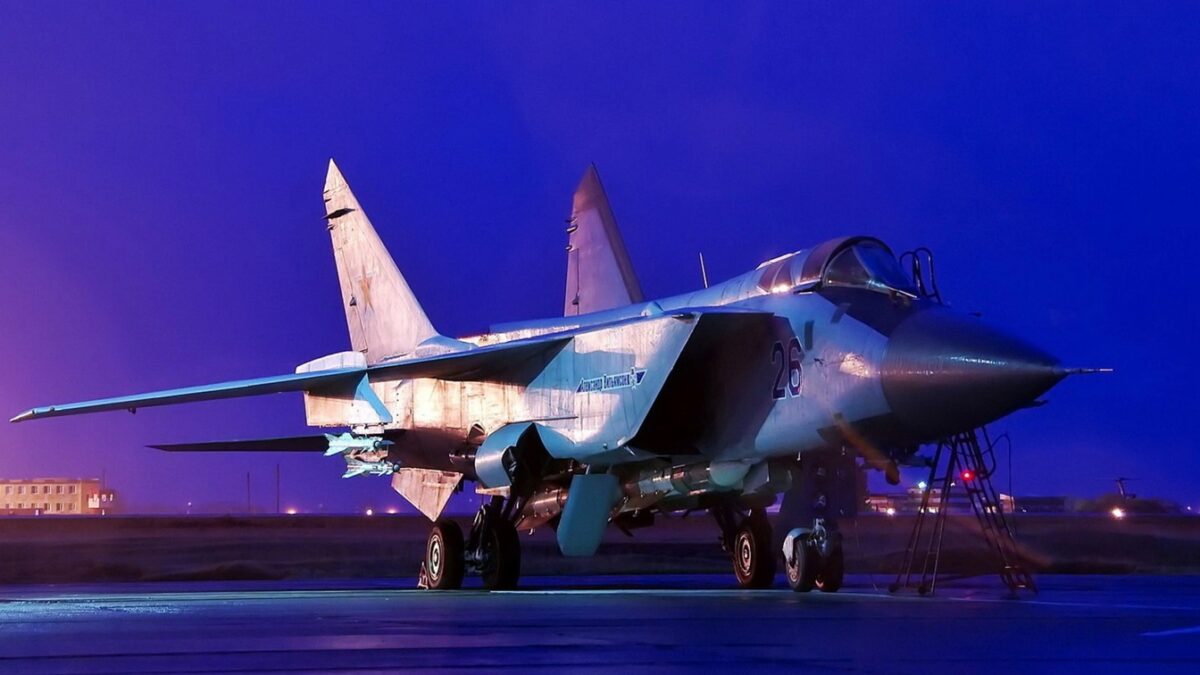 On the other hand, it was blindingly fast–inheriting the Mach 3 maximum speed of the preceding MiG-25 Foxbat interceptor with a  ‘look-down, shoot down’ Zaslon N007 phased-array radar (backed by a short-range infrared sensor) that could detect low-flying bombers and cruise missiles. Datalinks allowed the Foxhound crew and ground-based air defense units to ‘see’ through each other’s sensors, exchanging missile guidance data.

The modernized MiG-31BM model features the more capable Zaslon-M radar with a maximum detection range of 250 miles for larger aerial targets (airliner-like aircraft like the E-3 or E7 AWACS), and ability to engage six targets simultaneously. That allows the pilot to leverage the longer range of improved R-37M missiles.

MiG-31s reportedly began flying patrol early in the war, mainly from a base in Belbek in the Crimean Peninsula. On October 1st, one Foxhound from the 790th Fighter Regiment skidded off the runway during takeoff, caught fire, and exploded. Only the WSO managed to eject in time.

In October several MiG-31s were deployed to Belarus—including specialized MiG-31Ks (AKA MiG-31Is) equipped to launch Kinzhal hypersonic ground attack missiles. These have already conducted a few strikes on targets in Ukraine.

MiG-31 and That Range Challenge

These will remain outranged by the MiG-31BM’s missiles and radar, but should have much better sensors and countermeasures to detect incoming R-37s and evade them while still in the ‘escape zone.’ The range gap will also be much narrower for jets armed with Meteor or AIM-120 long-range missiles (around 60-120 miles) than Ukraine’s current Su-27 and MiG-29 jets with R-27 missiles (25-50 miles)—and the MiG-31 has large radar cross-section. That might compel MiG-31s to engage from greater distances (and thus a lower probability of a kill).

Admittedly, it’s tricky to judge whether Russia’s use of VLRAAMs in Ukraine is applicable beyond the context of the Ukraine-Russia air war, where the former’s jets are at a significant technical disadvantage. Still, Russia’s successful use suggests they may be more effective and affordable than previously thought, with broader uses in air-to-air combat for a weapon previously seen as a specialized killer of AWACS, bombers, and air-refueling tankers. 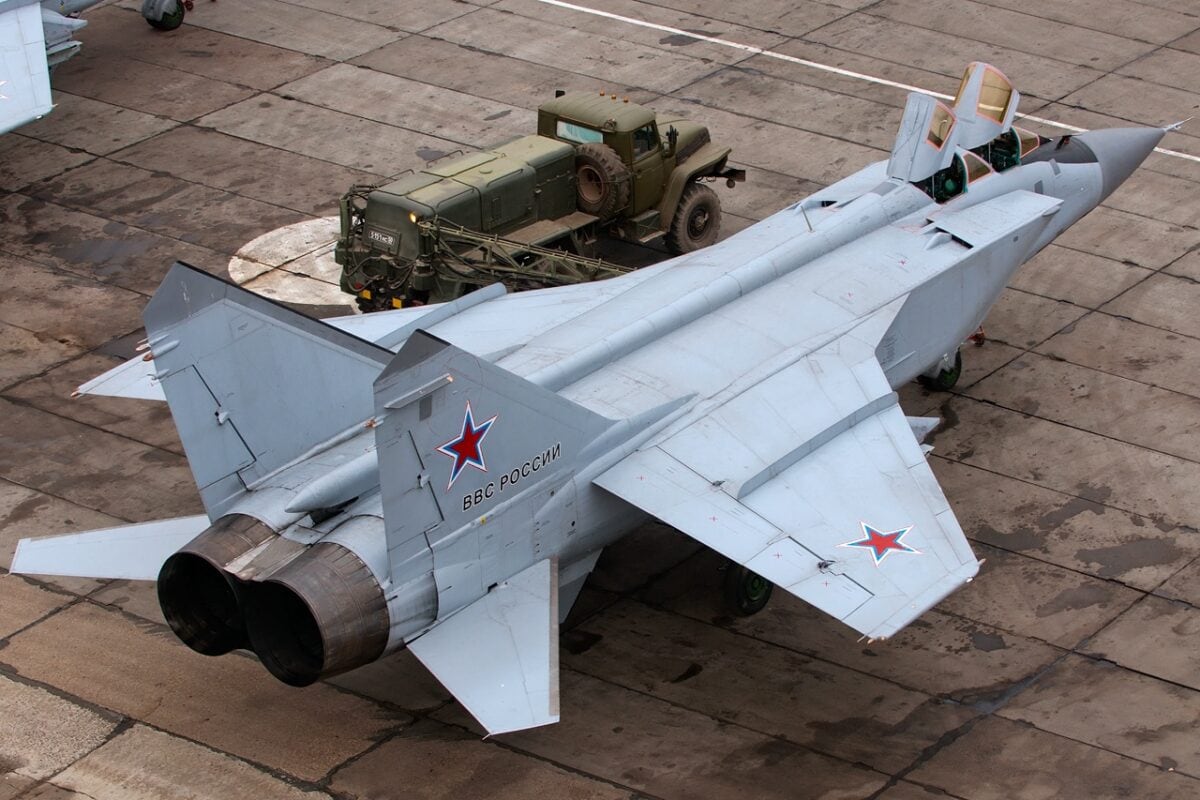 That may boost the Pentagon’s own apparent work on a VLRAAM for its non-stealth F-15EX jets—and work on counter-measures to protect its ‘backfield’ AWACS and tanker aircraft. The VLRAAM might also be an attractive weapon for the forthcoming B-21 bomber.

In this article:featured, MiG-31, Putin, Russia, Ukraine, War in Ukraine