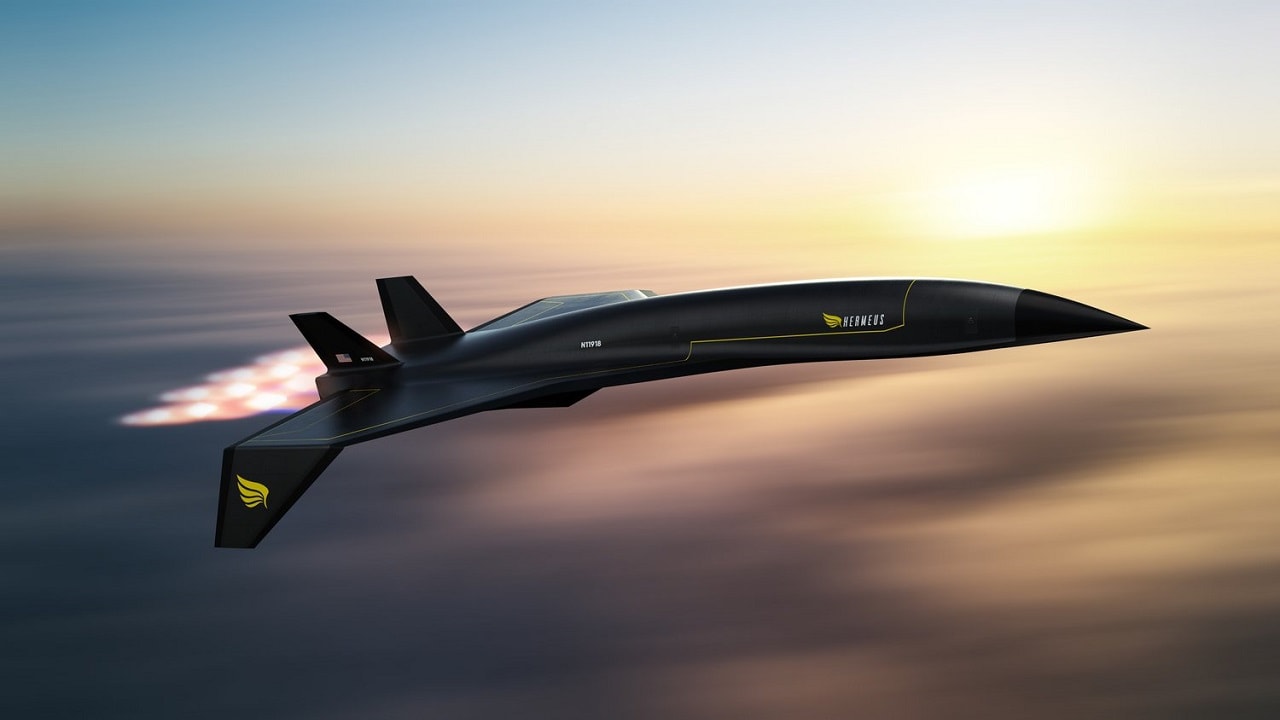 The U.S. Air Force is all in on building anything it can to ensure it wins that hypersonic technology race being conducted with Russia and China. Now, a company is stepping forward with big ideas that could pave the way for hypersonic aircraft:

On Thursday, Atlanta-based aviation firm Hermeus released a dramatic new video showing their hypersonic engine successfully transitioning from turbojet to ramjet operation, paving the way for it to propel their Quarterhorse aircraft to Mach 5 and potentially even beyond.

Hypersonic missiles, or weapons capable of flying and maneuvering at speeds above Mach 5, have been the subject of intense media focus in recent years, but efforts like the U.S. Air Force Research Laboratory’s Mayhem program and private firms like Hermeus are looking far beyond single-use high-speed munitions. Instead, these efforts aim to field fully reusable hypersonic aircraft leveraging a variety of different propulsion methodologies.

Hermeus’ Quarterhorse hypersonic testbed is an uncrewed aircraft meant to demonstrate the relatively young company’s ability to design, build, and field a truly reusable hypersonic aircraft. Building the unique engine intended to power it is arguably the biggest hurdle they need to overcome to get Quarterhorse into the sky.

Quarterhorse will be powered by the firm’s turbine-based combined cycle engine (TBCC) that marries two very different forms of jet propulsion: a traditional turbojet for low-speed flight just like the ones that power fighter aircraft, and a more exotic ramjet to take over at high speed and push Quarterhorse up and over Mach 5. When it’s time to land, the aircraft transitions back to the turbojet to manage its low-speed approach.

“This achievement is a major technical milestone for Hermeus,” said CEO AJ Piplica in a press release. “But more than that, it’s a proof point that demonstrates how our small team can rapidly design, build, and test hardware with budgets significantly smaller than industry peers.”

Successfully creating a single engine system that can transition from turbojet operation to ramjet is, in itself, an impressive feat of engineering, but Hermeus has managed to do it in just 21 months and for a grand total of just $18 million.

The firm’s novel and cost-effective approach to hypersonic aviation has already caught the attention of some deep pockets, raising more than a hundred million dollars from organizations ranging from Raytheon Technologies to the U.S. Air Force.

Turbojet, ramjet, and scramjet engines are all forms of jet propulsion, but they have a number of fundamental differences. Turbojets can manage speeds from a standstill up beyond Mach 2, but can’t sustain hypersonic speeds of Mach 5 or more. Ramjets and scramjets can, but can’t operate at lower speeds for take-off and landing.

This is one of the reasons why today’s hypersonics are not reusable. Hypersonic missiles are often carried to altitude and speed by a conventional rocket engine first, before either gliding back to earth at hypersonic speeds or engaging a scramjet for hypersonic propulsion. Scramjets can’t function at lower speeds, so these systems can’t fly slow enough to land and be reused.

Hermeus aims to get past this issue by combining a turbojet and ramjet into a single engine — which they’ve dubbed, Chimera.

“By making a full-range air-breathing hypersonic engine that does not require a rocket to accelerate, Hermeus is setting the stage for operational hypersonic flight – meaning aircraft that can be rapidly re-used,” their press release reads.

The basic concept driving Chimera and Quarterhorse is to rely on the turbojet engine during take-off and while accelerating. Once the aircraft reaches the performance limit of the turbojet—which Hermeus says is around Mach 2—the ramjet comes online.

“Chimera has a pre-cooler that reduces the temperature of the air coming into the turbojet. This allows Hermeus to squeeze out a bit more performance from the turbojet before transitioning to ramjet,” the release states.

At around Mach 3, Chimera begins to completely bypass the turbojet engine and rely entirely on the ramjet to propel the aircraft up to Mach 5 or possibly even a bit faster.

In order to keep costs down, Hermeus manufactured Chimera in-house, even 3D printing as much as 15% of the system’s components.

A turbojet uses a fan to suck in air and then squeezes that air with a compressor. The compressed air is then mixed with fuel and ignited, similar to how a piston compresses the air/fuel mixture in a car. As the ignited air/fuel mixture pushes out the back of the engine as propulsion, it spins a turbine connected to the fan and compressor at the front to power them. Thanks to the mechanical function of the fan and compressor, a turbojet can work from a stationary position up through supersonic speeds, but begin to lose efficiency at speeds approaching Mach 3.

A ramjet, on the other hand, has no fan or compressor. In fact, they have no major moving parts at all. They can only function when already traveling at high speed, and rely on the immense pressure of air flowing into the inlet and around a cone for compression. That compressed air is then mixed with fuel and ignited to produce thrust.

A scramjet functions much like a ramjet, but without the inlet cone. While that inlet cone slows the inflowing air to sub-sonic velocities for combustion in a ramjet, a scramjet allows the air to pass through at supersonic speeds. This allows you to fly much faster, but is exceedingly difficult to get working — keeping a scramjet engine burning with supersonic air flowing through it has often been compared to “keeping a match lit in a hurricane.”

Hermeus’ aims to begin flight testing their hypersonic Quarterhorse near the end of 2023, with aims to field both commercially viable hypersonic platforms as well as systems designed specifically for military applications.

Skyer Shuford, Hermeus’ COO, spoke with us earlier this year about why their innovative approach to low-cost high performance has caught the attention of the Defense Department.

While modern tactical aviation tends to be focused on stealth, hypersonic applications don’t lend themselves to low observability. The intense heat, friction, and pressure inherent to flight at speeds above Mach 5 are simply too much for the radar-absorbing material layered on today’s stealth aircraft to survive.

But Shuford points out that avoiding detection isn’t the only serious challenge facing America’s defense apparatus in the 21st century, and Hermeus’ technology could help to overcome one of the most pressing ones: the tyranny of distance.

“But really where we started to find interest in the kind of intermediate products that we’re looking to build is really in covering long distances quickly,” Shuford explained.

“When we’re getting into strategic competition, near peer adversaries where we really need to cover long distances quickly, where we need to get eyes on target quickly or reconstitute networks when something like a comm node went down. To be able to get there quickly, drop off a new comm node—those are starting to be the more interesting conversations that we’re starting to have.”