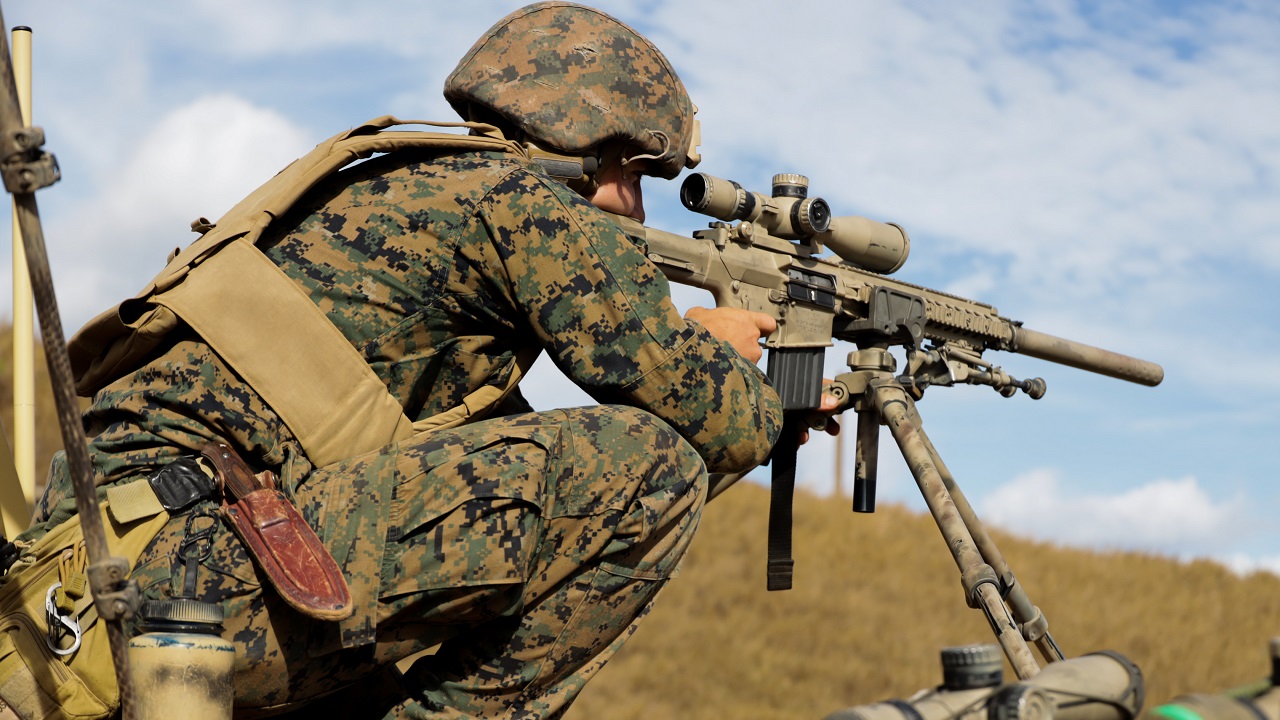 MARINE CORPS BASE HAWAII, Hawaii (July 6, 2022) U.S. Marine Corps Pfc. Darrel Ebaugh, a scout sniper with Weapons Company, Battalion Land Team, 3d Battalion, 4th Marine Regiment, Marine Air-Ground Task Force 7 (MAGFT-7), sights in on a target during a live-fire sniper range in support of Rim of the Pacific (RIMPAC) 2022, on Marine Corps Base Hawaii, July 6, 2022. Twenty-six nations, 38 ships, four submarines, more than 170 aircraft and 25,000 personnel are participating in RIMPAC from June 29 to Aug. 4 in and around the Hawaiian Islands and Southern California. The world’s largest international maritime exercise, RIMPAC provides a unique training opportunity while fostering and sustaining cooperative relationship among participants critical to ensuring the safety of sea lanes and security on the world’s oceans. RIMPAC 2022 is the 28th exercise in the series that began in 1971. (U.S. Marine Corps photo by Lance Cpl. Brayden Daniel)

While many senior leaders, active and retired, believe that the Marines need to adapt in their time-honored tradition to the emerging threats, they are split on how that should proceed.

Berger wants to get the Marine Corps back to its roots, according to his 2030 Force Design plan. Specifically, he wants the branch to conduct amphibious and land operations in support of naval campaigns to differentiate it from the Army and the special operations community and avoid becoming irrelevant. The Force Deisgn plan will be updated yearly.

Berger is not the first commandant to feel this way. His predecessor, General Robert Neller, said before the Senate Armed Services Committe in 2017 that “a critical self-assessment that revealed the Marine Corps is not organized, trained, equipped, or postured to meet the demands of the rapidly evolving future operating environment.”

“The Marine Corps must modernize and change to deter conflict, compete and, when necessary, fight and win against our adversaries,” General Neller added at the time.

Former Assistant Secretary of Defense for Special Operations and Low-Intensity Conflict Owen West wrote that Berger’s vision calls for the divestiture of current crisis-response and land-battle capabilities in order to build a large-scale, hyper-optimized capability. It is an expensive and bold undertaking that will take eight years to complete.

“We will not seek to hedge or balance our investments to account for other contingencies,” Berger wrote.

However, a group of 17 retired generals and senior officers, including former Secretary of the Navy Jim Webb, former Secretary of Defense Jim Mattis, former Joint Chiefs Chairman Joe Dunford, and John Kelly, the former head of Homeland Security and White House chief of staff, have been lobbying Congress to overturn Berger’s initiatives.

In a piece for the Washington Street Journal, Webb said that the daily working group has been formed to communicate concerns to national leaders.

“[The] retired general officers who are gravely concerned about the direction of the Corps in the last two and a half years would be above 90 percent,” according to a retired three-star general in the group.

Using Ukraine as an example, West wrote that “Marines can’t fight in an urban setting without tanks.”

“The U.S. Army has the expertise and is developing a new tank. Marines should pitch in 10 percent of the money and get the opportunity to make changes on the margin,” he added.

On the other hand, Marine Corps Commandant David Berger feels that the heavy armor and short-range artillery tubes of the Marines are not suited to fight in the Indo-Pacific region. He’s divested the Marine Corps of those systems in an effort to make the Marines lighter, faster, and more mobile.

“We have sufficient evidence to conclude that [armor] capability, despite its long and honorable history in the wars of the past, is operationally unsuitable for our highest-priority challenges in the future,” Berger wrote.

General Van Riper (Ret.) censured Berger’s decision lamenting that “the Corps will have more space experts, cyber warriors, influence specialists, missileers and others with unique skills” than “Marines prepared to close with and destroy the enemy.”

Despite the time-honored tradition of the commandant of the Corps being rarely questioned, these generals, right or wrong, feel strongly enough about the changes being implemented that they have gone public with their feelings.

Adapt or fade to irrelevance, say some experts

Under law, the Marine Corps’ primary mission is “the seizure or defense of advanced naval bases and […] the conduct of such land operations as may be essential to the prosecution of a naval campaign.”

However, during the two decades of the Global War on Terror, the Marine Corps adapted to the changing needs of the country. They were heavily involved in the fighting in Afghanistan and Iraq far from the coast. As a result, many Marines received no experience in amphibious operations. Critics called the Marine Corps “a second land Army.”

The Marine Corps will fade to irrelevance if it doesn’t change, according to some.

Dakota Wood, a senior research fellow at the Heritage Foundation wrote that “Transformation is part of the DNA of the Corps. This latest iteration merits the support of all Marines and those charged with the defense of our nation.”

The future path of the Marine Corps could be clarified when the Senate begins hearings on the 2023 National Defense Authorization Act.

Steve Balestrieri is a proven military analyst. He served as a US Army Special Forces NCO and Warrant Officer in the 7th Special Forces Group. In addition to writing for  Sandboxx.com, he has written for 19fortyfive.com and SOFREP.com; he has covered the NFL for PatsFans.com for over 11 years. His work was regularly featured in the Millbury-Sutton Chronicle and Grafton News newspapers in Massachusetts. This first appeared in SandBoxx.