“Strike Eagle, Strike Eagle, they call me by name/I bombed the hell outta Goldwater Range…” So begins the song that Dick Jonas—Vietnam War fighter pilot turned professional singer—dedicates to the F-15E Strike Eagle, the successor to the F-4 Phantom that Lt. Col USAF, Ret. Jonas had flown over the jungles of Southeast Asia. And an examination of the F-15E’s history makes it abundantly clear why “the fighter pilot’s minstrel” sings about the Strike Eagle with such reverence.

The F-15 Eagle series of fighter jets certainly needs no introduction to military aviation history buffs, as it has attained an unmatched and mind-boggling 104:0 kill ratio during 40-plus years of service, with nary a single loss in air-to-air combat.

The E-series variant in particular made her maiden flight on 11 December 1986, 14 years after the original F-15 did so.

The Strike Eagle in particular was conceived as a warplane that would truly excel in both the air superiority and the ground attack roles, a dual which the General Dynamics F-111 Aardvark had previously been intended to fulfill but didn’t quite make it (although, in fairness, the Aardvark did perform quite well during Operation Eldorado Canyon, the U.S. bombing mission against Libya in April 1986). Indeed, by 1996 the F-111 would be retired and completely replaced by the F-15E.

What Truly Makes the F-15E Special

The most obvious difference between the F-15E and earlier models is that this one is a two-seater, as the Strike Eagle also has a weapons system officer (WSO), known affectionately in USAF slang as a “Whizzo” or “GIB (Guy/Gal In Back).”

The Whizzo is a necessary addition for multiple reasons, chief among them being the operation of the APG-70 radar system, which, as my 1945 colleague Brent M. Eastwood explains, “has a dual role too. The pilot can use the system to engage ground targets while the weapons system officer can look out for air targets. The crew can then swap roles depending on whether there are new air-to-air threats or different targets on the ground.” In addition, as Brent continues, “The weapons system officer has a great gig because there is all kinds of action in the back seat. There are four screens to peruse. These handle radar, electronic warfare, enemy aircraft monitoring, weapons status, threats, and navigation.”

As for the intended dual role of the plane, this warbird can carry a payload of up to 23,000 pounds (3,628 kilograms) of bombs, with a carrying capacity of 15 JDAMs being one of the options. (Joint Direct Attack Munitions).

“…And I Laid a Couple in Saddam’s Backdoor”

The F-15E received its baptism of fire during Operation Desert Storm. On the first night of that campaign, 24 F-15Es launched an attack on five fixed Scud installations in western Iraq. F-15Es struck heavily defended targets throughout Iraq, prioritizing SCUD missile sites, as well as embarking on tank plinking missions against Iraqi vehicles in Kuwait prior to the commencement of the ground war phase of the Kuwait liberation effort.

Ironically enough, the F-15E would score its first air-to-air kill, not with its internal gun 20mm gun or its air-to-air missiles…but a laser-guided bomb, namely a GBU-10.

On Valentine’s Day of 1991, an F-15E crew consisting of then-Captain Tim Bennett, the pilot, and then-Capt. Dan Bakke, the WSO, spotted a Mi-24 Hind helicopter in the process of unloading Iraqi troops which would have posed a threat to a nearby U.S. Special Forces team.

As recounted by Tim Bennett himself:

“Dan and I discussed how we wanted to conduct the attack. We decided to hit the lead helicopter with a GBU-10 while he was on the ground. If we hit him, he would be destroyed. If he moved off before the bomb landed, it would still get the troops he just left on the ground. It would also give the other helicopters something to think about, which might give the team a chance to get away in the confusion…There was a big flash, and I could see pieces flying in different directions. It blew the helicopter to hell, damn near vaporized it.”

Strike Eagles would go on to add three UAVs to their air-to-air kill tally during operations over Syria in 2017 and 2021. As far as the bombing role, the F-15E did this with aplomb, from Operations Deliberate Force and Allied Force over the Balkans, to Operations Enduring Freedom and Iraqi Freedom (credited with destroying 60% of the Iraqi Medina Republican Guard’s total force during the latter operation), to the Operation Inherent Resolve. In November 2015, the Strike Eagle bagged her highest-value target, killing Abu Nabil AKA Wissam Najm Abd Zayd al-Zubaydi, then-leader of Islamic State (ISIS) in Libya.

Here were now are in 2022, and she’s indeed still flying. 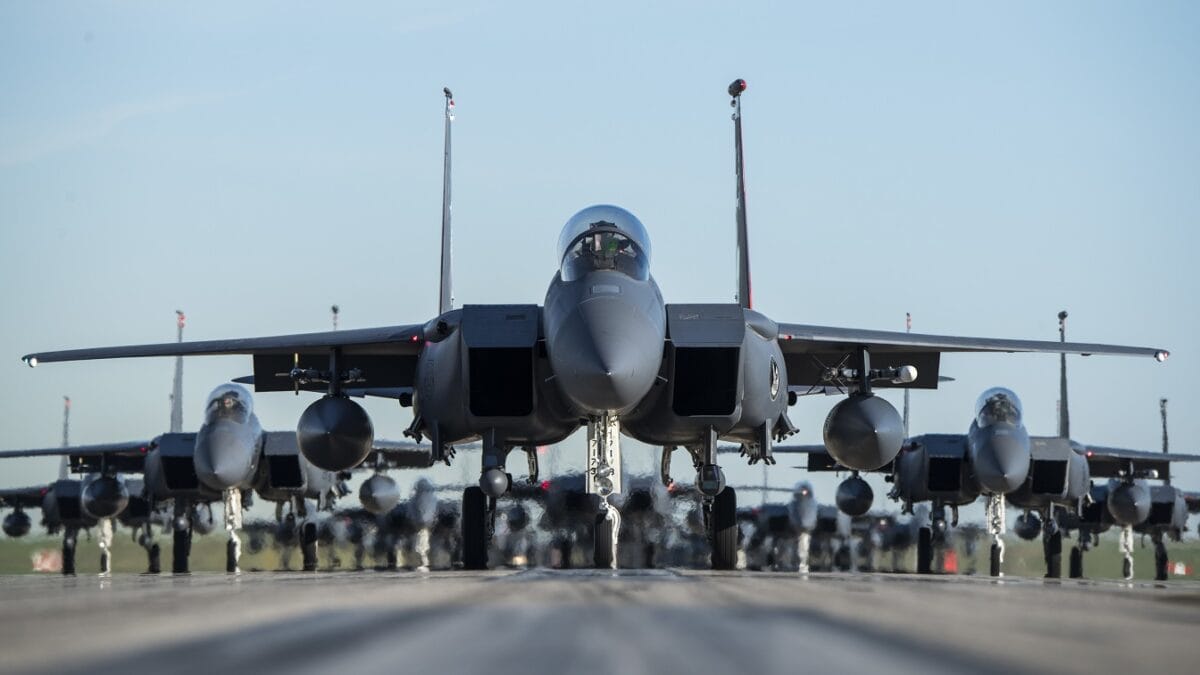 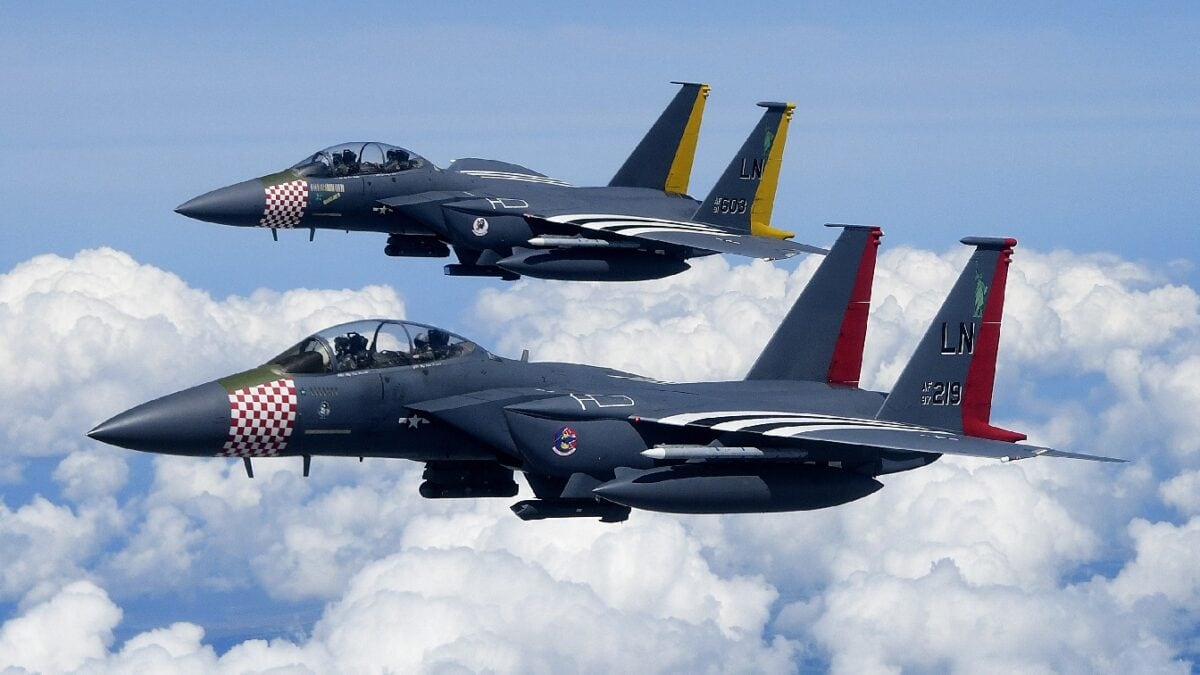 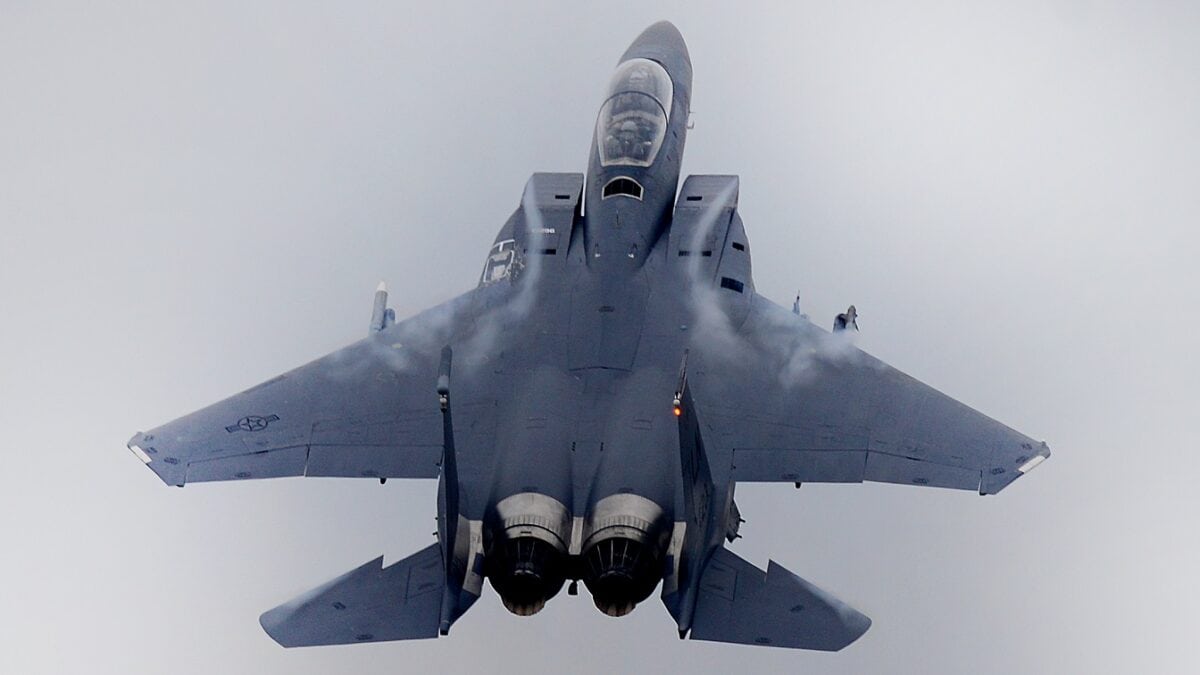