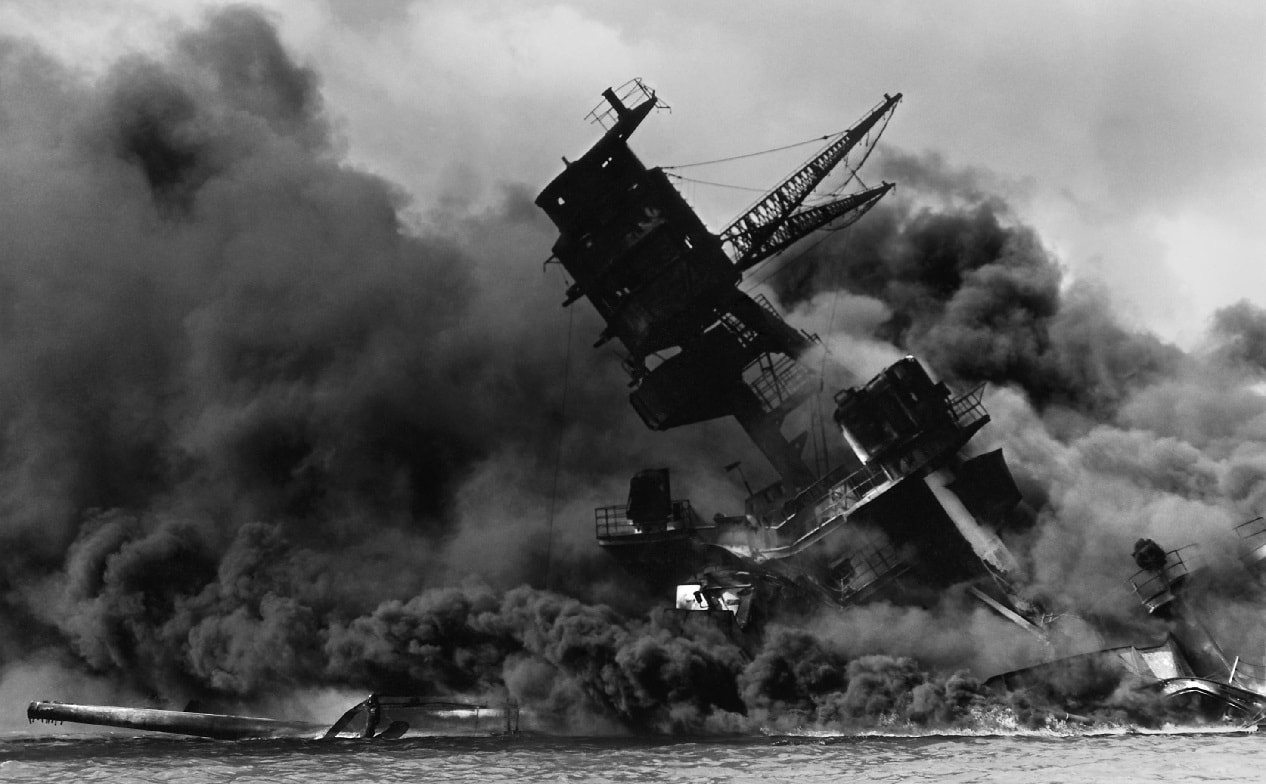 As I type these words, it is the morning of December 7th, 2022, the 81st anniversary of the attack on Pearl Harbor, and a few hours from now the Naval Order of the United States (NOUS) National Capital Commandery will be hosting its annual Pearl Harbor Remembrance Dinner.

Though I don’t have a direct family connection to Pearl, it still resonates with me personally, as (1) my Dad had graduated from Omaha North High School in Nebraska a mere six months earlier and would soon enough find himself contributing to the war effort as a B-25 Mitchell armorer with Marine Air Group (MAG) 61; and (2) the day after Pearl, Imperial Japan began its invasion of the Philippines, which resulted in my Mom, a two-year-old girl at the time, spending three years of her toddlerhood under enemy military occupation.

Though Pearl Harbor was obviously a smashing victory for Japan – and a shockingly humiliating defeat for the United States – Hideki Tojo’s victory was not without cost: 29 planes were shot down, five mini-submarines sunk or run aground, and 55 sailors and airmen KIA.

Those mini-subs, in particular, stood out as an ignominious failure in an otherwise highly tactically successful – but ultimately strategically flawed – Imperial Japanese Navy (IJN) attack.

The Type A Kō-hyōteki-Class Boats

Those five ill-fated IJN midget subs were of the Type A Kō-hyōteki (甲標的甲型)class. These bite-sized boats were armed with two muzzle-loaded 450mm (17.7 inch) torpedoes and had a 2-man crew that consisted of a junior commissioned officer – typically an Ensign/海軍少尉/Kaigun-shōi or a Sub-lieutenant/海軍中尉/Kaigun-chūi (the equivalent of a Lieutenant j.g. in the U.S. Navy) – who commanded the vessel whilst a petty officer manipulated valves and moved ballast to control trim and diving.

The Type As had a submerged displacement of 47 tons, a hull length of 78 feet 5 inches, a beam of 5 feet 11 inches, and a height of 9 feet 10 inches, (Boy oh boy, as if standard-sized submarines weren’t claustrophobic enough!). The test depth was 98 feet, surfaced speed was 23 knots, and the submerged speed was 19 knots.

‘Twas indeed one of these ill-fated IJN midget submarine crews – that being boat No. 20 – and not the Americans who suffered the first casualties of the Pearl Harbor attack during that fateful December Sunday morning. These casualties were inflicted by the crew of the destroyer USS Ward (DD-139). As described by PearlHarbor.Org:

“[A]t 0358, minesweeper Condor signaled to Ward that an object looking like a submarine was spotted. The skipper of Ward, Lt. William Outerbridge, had taken command of the ward just that weekend. He immediately called general quarters and began ‘pinging.’ The ‘pinging’ was useless and Ward could not find the submarine that Condor had seen … Finally, at about 0630 a submarine was spotted by a PBY plane. It was targeting repair ship, USS Antares, which also spotted the submarine. The Ward spotted it and began bearing down on the sub at 25 knots.  As she reached within 500 yards, she was firing a had a direct hit on the Japanese midget submarine … The submarine heeled over and began sinking. Four depth charges were dropped from Ward. Visible from both Ward and Antares was the oil from the submarine leaking to the surface.”

Word of the sinking was passed on eventually to reach Pearl Harbor’s C.O, Admiral Husband E. Kimmel, by 0730 that morning, but Kimmel didn’t act upon it, due to previous reports that had turned out to be “boy who cried wolf” stories, and the Army wasn’t event notified. Which in turn provided grist for the conspiracy rumor mill about foreknowledge of the pending attack on the part of the senior American political and military leadership.

Not Much Better Luck for No. 20’s Compatriots

Three of No. 20’s sister ships, Nos. 18, 19, and 22, hardly fared any better: No. 18 was damaged in a depth charge attack and her crew abandoned ship without being able to fire the torpedoes; No. 19 ran aground on the east coast of Oahu, with pilot Ensign Kazuo Sakamaki ending up as the first Japanese P.O.W. captured by American forces, and the boat itself eventually ending up as an exhibit at the National Museum of the Pacific War in Fredericksburg, Texas; and No. 22 unsuccessfully fired her torpedoes at the seaplane tender USS Curtiss (AV-4) and USS Monaghan (DD-354) … and got sunk by the latter for her troubles.

There is at least circumstantial evidence – including of the photographic nature – that at least one of the mini-subs, namely No. 16, may have successfully fired her torpedoes and struck the battleships USS West Virginia and USS Oklahoma in the process. Be that as it may, even these minor successes paled compared to the lion’s share of the damage that was inflicted by the Japanese aviators Aichi D3A’ “Val” dive bombers and Nakajima B5N “Kate” torpedo bombers. In any event, No. 16 ended up as a wreck split into three parts, strewn about three miles from the Pearl Harbor entrance, apparently scuttled by her crew.