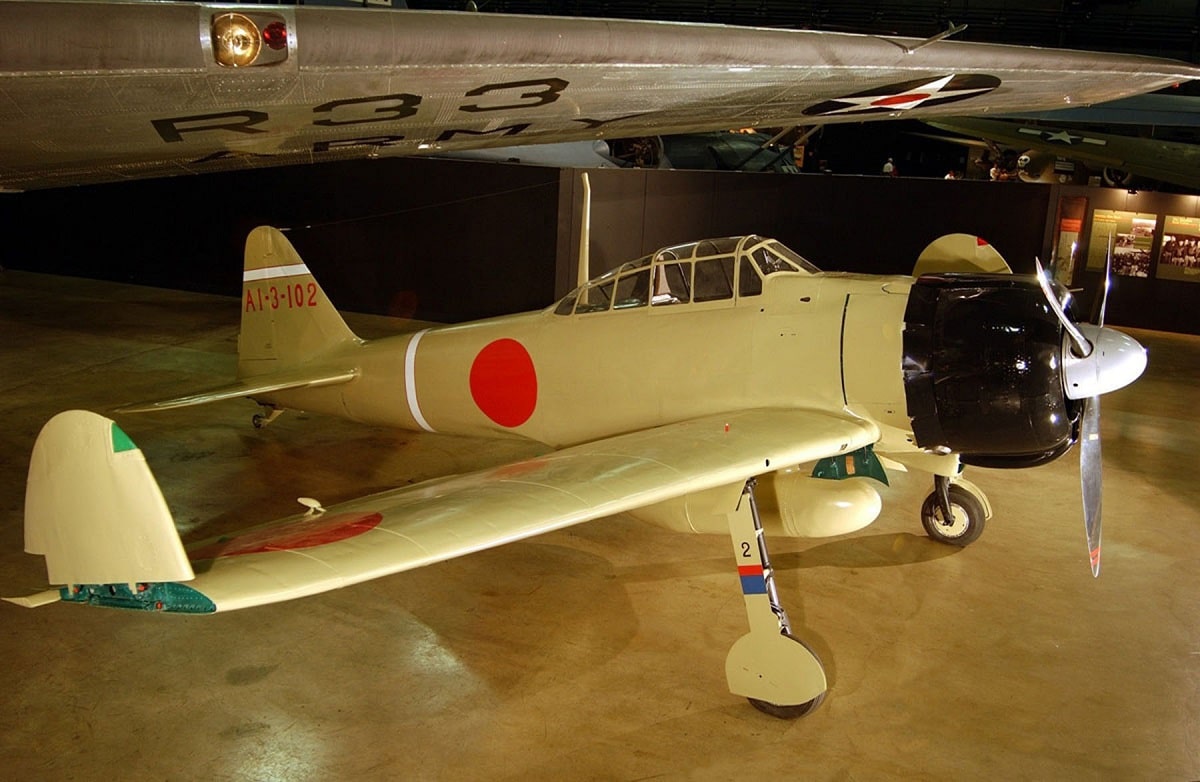 Japan’s Zero was a legendary fighter that made the U.S. military very nervous in the opening days of World War II in the Pacific Ocean after Pearl Harbor. But did it become obsolete? When Mitsubishi AGM Rei-sen entered service in 1940, western military experts shrugged off the reports that the Japanese military possessed a world-class warplane. How wrong they were. The aircraft – better known as the “Zeke” or “Zero” – dominated the skies in the early stages of the Second World War. The single-seat, low wing monoplane proved to have been the most capable carrier-based fighter in service at the time, and it gave the Japanese naval forces almost guaranteed air superiority.

The A6M, which was designed by Horikoshi Jiro, was also noted for being the first carrier-based fighter able to best its land-based opponents. However, beginning in 1943, the tide turned against the Zero with the introduction of more capable Allied fighters.

It Was Fast and Agile

The A6M was produced by Mitsubishi Heavy Industries and was first powered by a Nakajima Sakae radial air-cooled engine of 14 cylinders (two staggered rows of seven) that developed 1,020 horsepower. It was hardly a powerful engine, but designers did everything possible to reduce weight.

However, the effort to make it fast and light also meant that it had very little armor and was vulnerable to even the lightest caliber enemy armament. That wasn’t a problem when the aircraft’s speed and agility allowed it dominate the skies, but as more capable Allied aircraft went up against the Zero, it proved deadly for the Japanese pilots. It certainly was never even able to gain mastery over the Grumman F4F Wildcat, whose heavier armament and robust construction compensated for its slightly inferior performance and agility.

The Zero was armed with two 7.7-millimetre machine guns and two 20-millimetre cannons in its wings; it could carry two 132-pound (59.9-kilogram) bombs under the wings.

The aircraft was never officially designated the “Zero,” and it wasn’t even known as such by the pilots that flew the aircraft. The Mitsubishi A6M Rei-sen was officially designated by the Imperial Japanese Navy as the “Rei-shiki-kanj -sent ki – Type 0 Carrier Fighter,” and the more common moniker comes from the fact that it was essentially named for the Japanese year 2600 (1940).

Japanese military equipment of the era was named for the year – as noted by such weapons as the Type 99 light machine gun that was introduced in 1939. Interestingly, the same year the Mitsubishi A6M was introduced, the Imperial Japanese Army introduced the “Hyaku-shiki kikan-tanj ,” also known as the Type 100 submachine gun. It remains entirely unclear why the IJN used “0” while the IJA used “100” for the same year.

Most Produced Japanese Aircraft of the War

More Zeroes were manufactured during the Second World War than any other Japanese aircraft, and production continued until the very end of the conflict. Sources vary, but somewhere between 10,499 and 10,939 were produced during the war in the Pacific.

Some 125 Zeros participated in the sneak attack on Pearl Harbor on December 7, 1941 and only nine failed to return.

Today, there are fewer than twenty surviving Zeros in the world and only a handful in factory original condition. Most in museums were restored wrecks, and the aircraft that are still airworthy have had their engines replaced with American units. Only the Planes of Fame Museum in Chino, California has an intact Zero with the original Sakae engine.

The aircraft is so rare that movie and TV productions have had the single-seat North American T-6 Texan – heavily modified and painted with Japanese markings – stand-in for the Zeros. Such aircraft were seen in the film Tora! Tora! Tora! and The Final Countdown, as well as the TV series Black Sheep Squadron.

An original A6M5 Type 0 Model 52, a variant built in the latter stages of the Second World War, did appear in the 2001 Michael Bay epic Pearl Harbor, the model is anachronistic for the era. In addition, that aircraft and the other replicas used in the film were painted green in color, as if they were Japanese Army aircraft. In fact, the Zeros of the IJN that raided Pearl Harbor were silver, but Bay said he liked the way the aircraft looked and that it would help audiences differentiate the “good guys from the bad guys.” 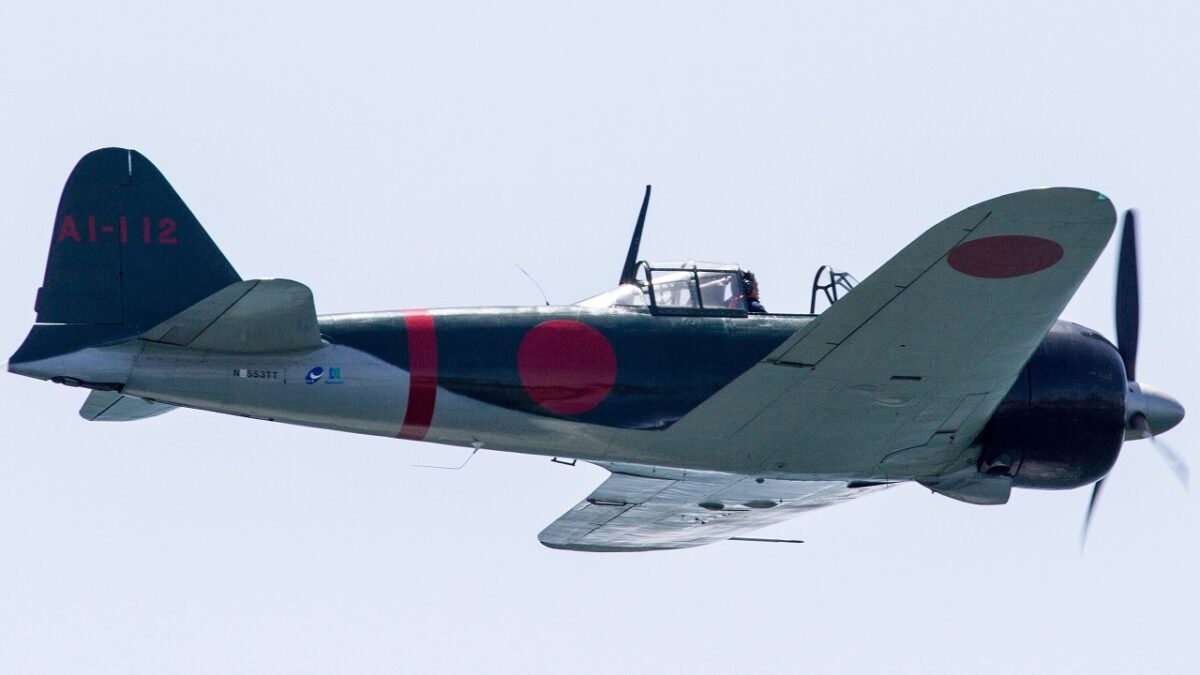 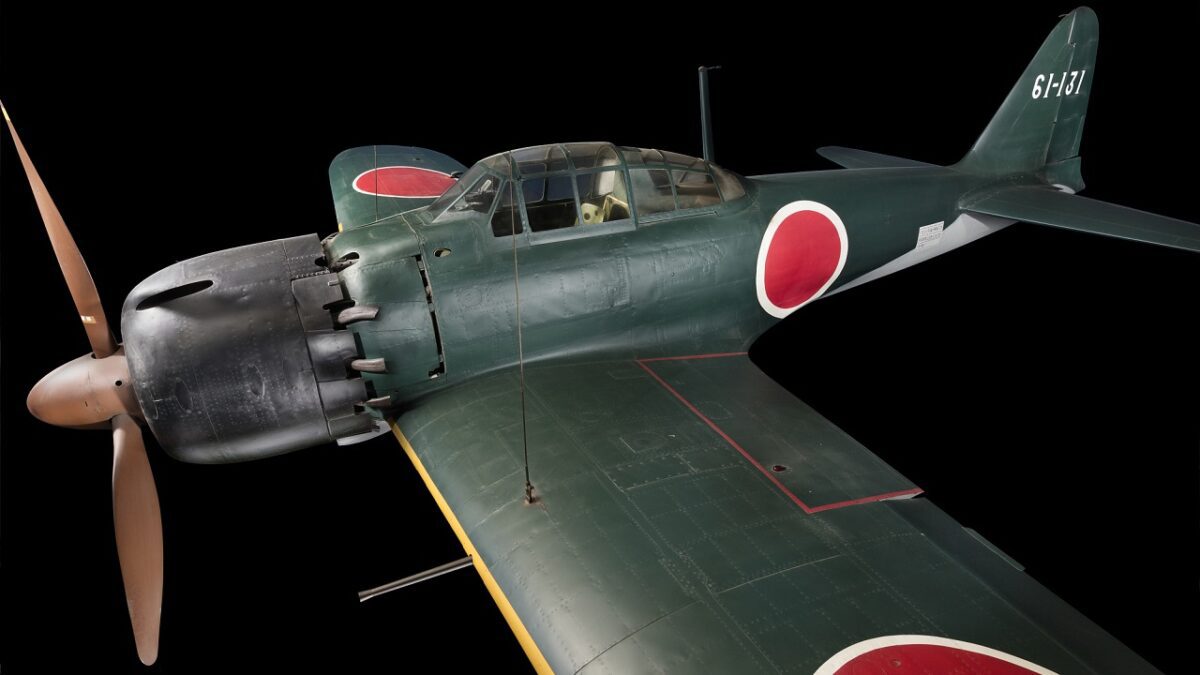 No other aircraft surpasses the Mitsubishi A6M Reisen (“ree-sin,” Japanese for Zero Fighter) as the symbol of Japanese air power during World War II. Mitsubishi designed the Zero fighter but co-produced the airplane with Nakajima. 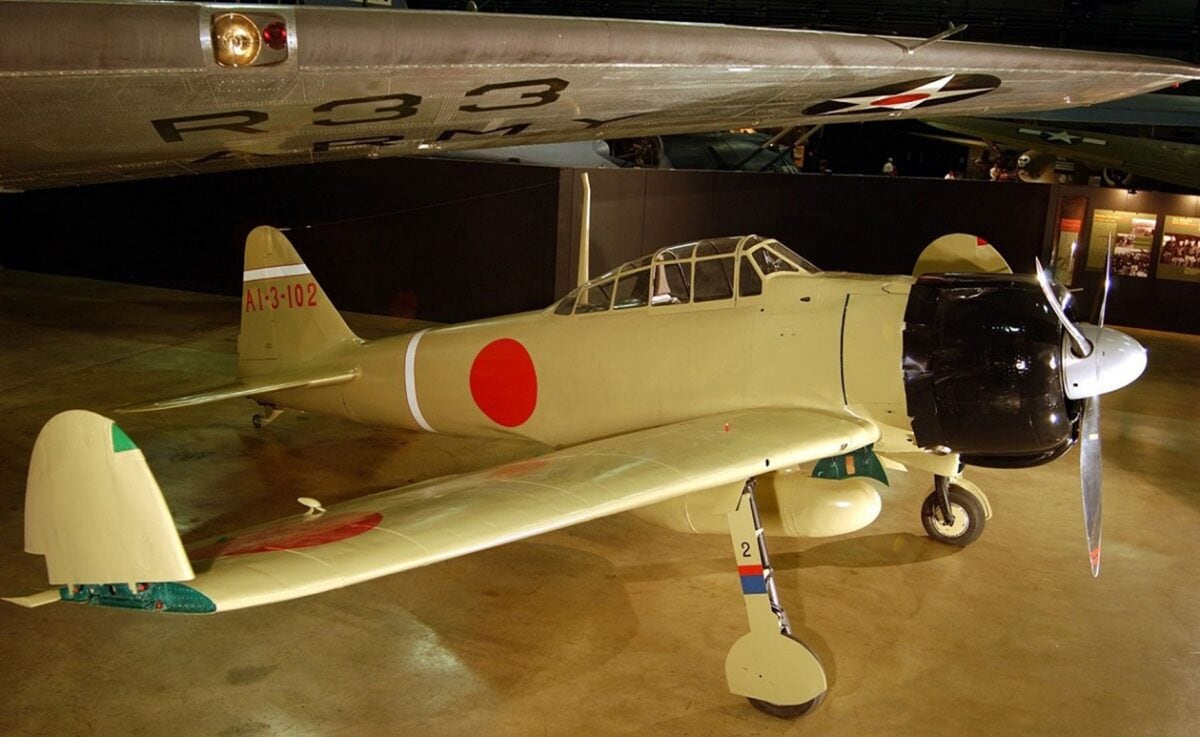 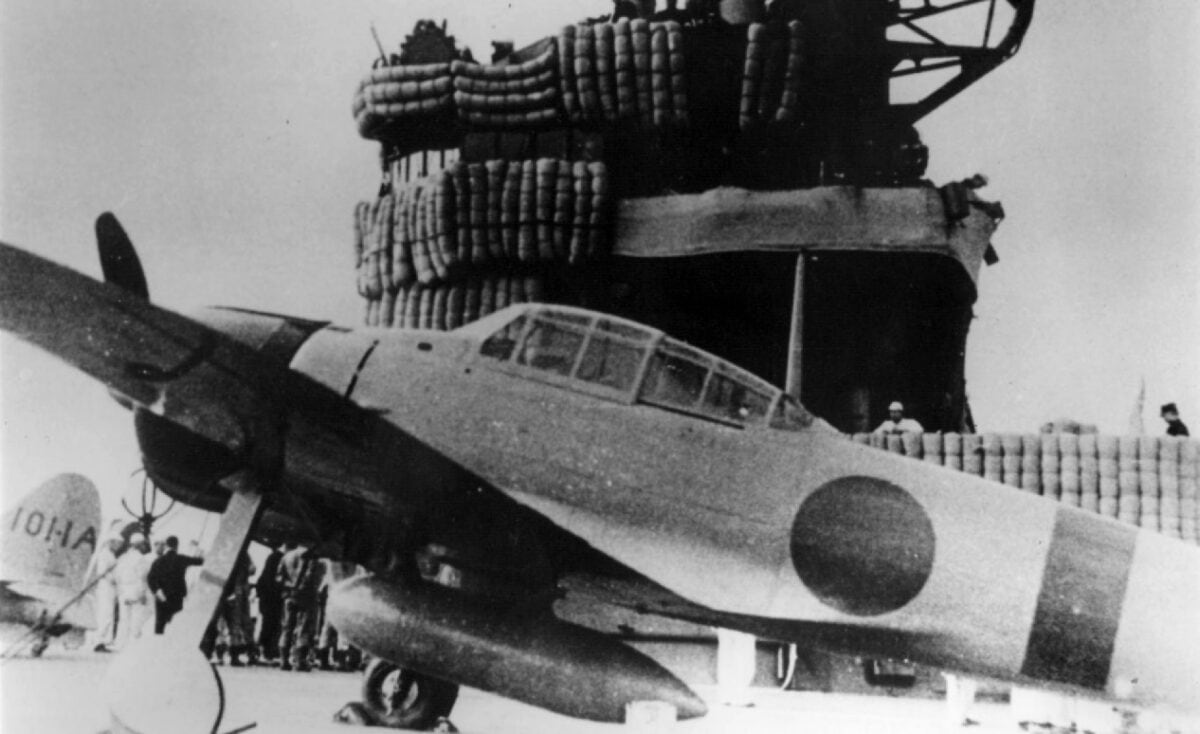 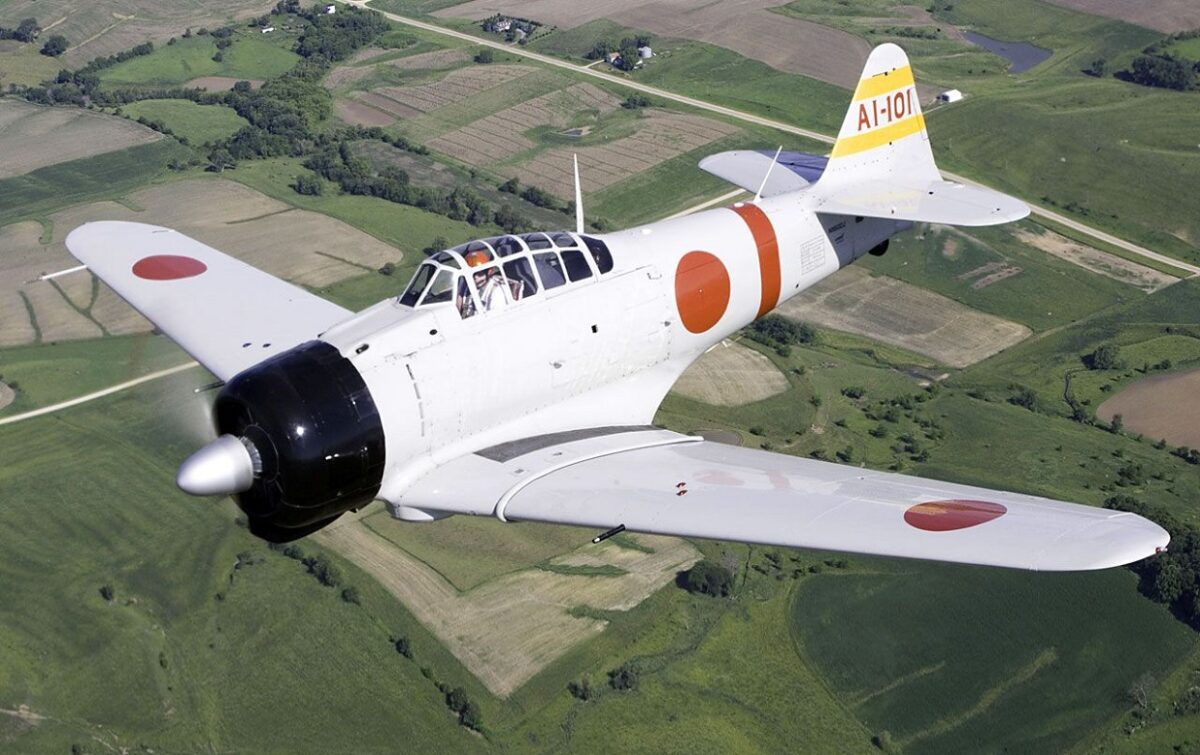 Now a Senior Editor for 1945, Peter Suciu is a Michigan-based writer who has contributed to more than four dozen magazines, newspapers and websites. He regularly writes about military hardware, and is the author of several books on military headgearincluding A Gallery of Military Headdress, which is available on Amazon.com. Peter is also a Contributing Writer for Forbes.