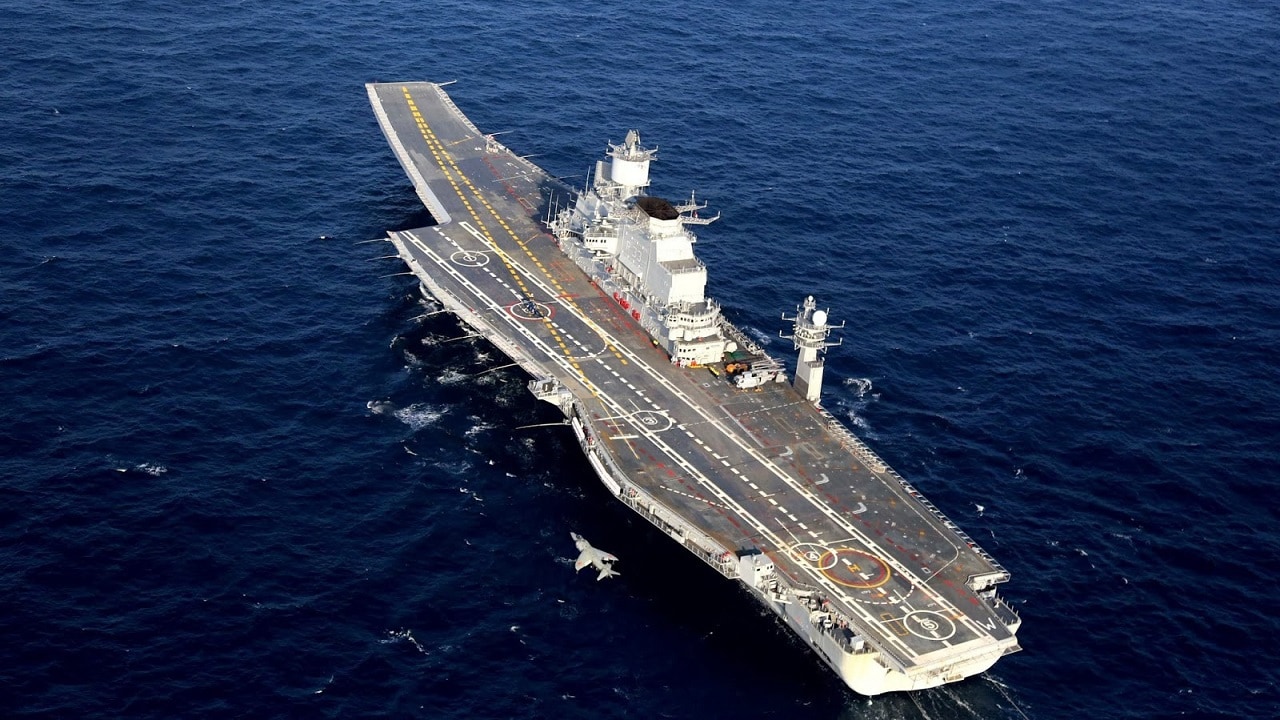 INS Vikramaditya (R33) with a Sea Harrier aircraft in the Arabian Sea.

Maybe India should have kept its aircraft carrier money. They bought INS Vikramaditya from the Russians, hoping it would be a quality aircraft carrier. The Indians were disappointed.

They should have known better as the Soviet and later the Russian navy struggled with their carrier programs, such as the less than stellar Moskva-class, the Kiev-class, and the Kuznetsov-class. India and Russia have sometimes been aligned (even though India preached non-alignment) throughout the Cold War, and Russia is a major supplier of Indian arms, but the deal for the aircraft carrier was ill-advised from India’s point of view.

History of the Aircraft Carrier Vikramaditya

The Vikramaditya was originally a Kiev-class carrier named the Baku that was in turn re-named the Admiral Gorshkov. The Gorshkov spent time with the Soviet navy as the Baku only four years – from 1987 to 1991 around the fall of the Soviet Union. Then the Russian navy operated it until 1996. It was difficult and expensive to maintain after a boiler room accident in 1994, so the Russians felt they could recoup some of the original investment by selling it.

India Thought It Had a Deal

India was enthusiastic. This purchase could save time and money in development that would have been required with an original design. Meanwhile, Russia had a big fish on the line that swallowed the bait whole. India was willing to pay $2.3 billion for the ship that included a handful of MiG-29Ks. This was way more than the Soviets had paid originally. The Kremlin agreed to make some adjustments that improved performance, but they were glad to get the ship off their hands.

The Admiral Gorshkov was a hybrid carrier – too small to be a real carrier and too big to be a cruiser. It had a decent suite of weapons, especially the Bazalt / Sandbox anti-ship missiles. It carried only the vertical take-off and landing Yak-38 and a handful of helicopters.

India converted the Gorshkov into a short take-off but assisted recovery carrier (STOBAR) and commissioned it as the Vikramaditya in 2013 with official entry into service in 2014.

It has some modern features such as an air-surveillance phased array radar, electronic warfare capabilities, and some of the first software networks on Russian ships. New air conditioning and refrigeration systems were installed. The flight deck has a 12-degree ski jump. 1,750 compartments were re-built.

That’s the upside. But there are many downsides to the Vikramaditya.

The carrier’s sewer system had a toxic leak that killed two maintenance workers in 2016. The boiler room had a fire in 2019. An officer died and many others were wounded in the blaze. Then there was a fire in 2021 with no one hurt and yet another in 2022 with no casualties. The first thing sailors learn is to fight fires and they quickly understand that these incidents are some of the most serious encounters that personnel can face in their careers. It must have frightened the sailors to serve on such a problematic ship.

The Vikramaditya went into refit in August for a few months to perfect its operations. This will give India two functioning aircraft carriers along with the indigenously built Vikrant that was commissioned this year. If Vikrant is successful, the Indians should focus on their own homegrown defense industry and not purchase from other countries.