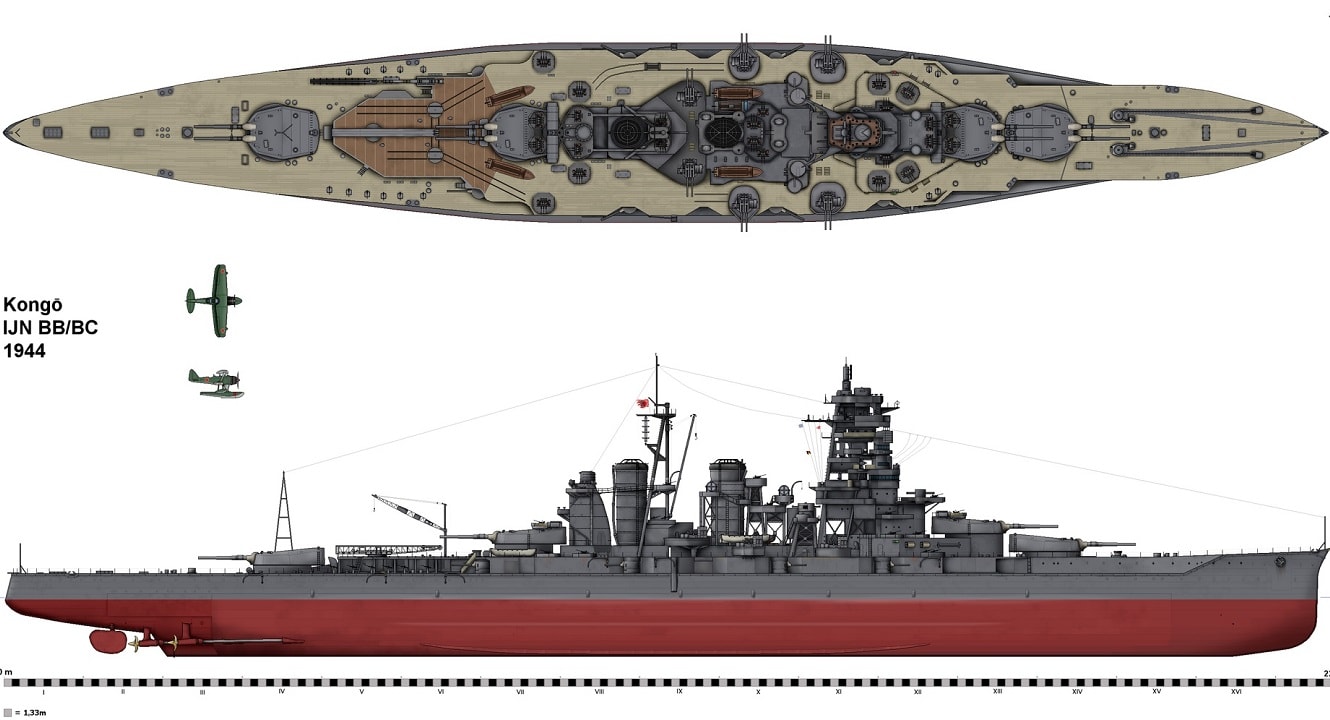 USS Sealion, a History: During the Pacific Theatre of Operations in WWII, U.S. Navy submarines, known collectively as “The Silent Service,” were an absolutely vital component in the defeat of Imperial Japan, ravaging the Hideki Tojo’s merchant fleet and the warships of the Imperial Japanese Navy (IJN) alike.

Regarding the latter target category, American subs sank their fair share of aircraft carriers, including the 69,000-ton supercarrier Shinano, sunk by the USS Archerfish under the command of Comm. Joseph F. Enright.

Shinano was the largest ship killed in the history of submarine warfare, having started off her star-crossed life as a battleship, sister ship to the Yamato and Musashi, the world’s largest battleships.

Interestingly though, only one American sub managed to sink a bonafide Axis battleship during the course of the war.

The submarine was the USS Sealion II, and the victim was the IJN Kongō. Let’s take a closer look at this singular event in naval warfare history.

Profile of the Predator: the USS Sealion

Just like the aforementioned Archerfish, USS Sealion II (SS-315) was a Balao-class (named for the balao halfbeak fish species, scientific name Hemiramphus balao). Her keel was laid by the famous Electric Boat Company of Groton, Connecticut, launched on October 31, 1943 (Trick or Treat, Tojo!), and commissioned on March 8, 1944.

She was armed with ten 21-inch (533mm) torpedo tubes – six tubes fore and four aft – a 5-inch (127mm)/25 caliber deck gun, plus Bofors 40mm and Oerlikon 20mm anti-aircraft guns. Regarding the latter two weapons systems, Vice Admiral Charles A. Lockwood, Commander, Submarine Force Pacific Fleet (COMSUBPAC) stated emphatically in his book Sink ‘Em All, “I did not want my submarines engaging in gun battles with planes … Why improve [our AA defenses] if there were no intention of using them?”

Sealion II projected a length of 311 feet 9 inches (95.02 meters) with a displacement of 1,550 tons surfaced and 2,463 tons whilst submerged. She traversed the seas at 20.25 knots on the surface and 8.75 knots beneath the waves. Departing for her first war patrol on 8 June 1944, she claimed her first victim 20 days later, the Japanese naval transport Sansei Maru.

Fast-forward to September 12 of that same year, and Sealion inadvertently participated in one of the most tragic “blue-on-blue” incidents of the war when she sank the Rakuyō Maru and Kachidoki Maru, which happened to be transporting a combined 2,218 Australian and British prisoners of war; 1,559 of these POWs perished as a result.

Sealion II and fellow American subs managed to rescue 150 of their compatriots, with the remaining 500 or so picked up by IJN destroyers and transported onward to Japan.

At the time of her momentous encounter with battleship Kongō, the sub was skippered by 31-year-old Lt. Cmdr. Eli Thomas Reich, U.S. Naval Academy Class of 1935.

Profile of the Prey: the IJN Kongo

The Kongō (“Indestructible Diamond,” and named after Mount Kongō in Osaka Prefecture, not the African Congo) was the lead vessel in the Kongō-class of battleships, which was the IJN’s most active capital ship class during the Second World War. Kongō and her sister ships – which included the Hiei and Kirishima  – displaced 36,601 tons.

“Kongō … was actually designed by British naval engineer Sir George Thurston. She was constructed at Barrow-in-Furness in the UK by the Vickers Shipbuilding Company, and was in fact, the last Japanese capital ship to be constructed outside of Japan, which had sought to profit from the study of British techniques by ordering the warship from the UK shipbuilders.”

At the time of her fateful encounter with Sealion II, the Kongō was skippered by Rear Admiral Shimazaki Toshio, a 1916 alumnus of the prestigious Naval Academy Etajima (海軍兵学校, Kaigun Heigakkō).

On November 21, 1944, the die was cast. Kongō was sailing as part of Admiral Takeo Kurita’s First Strike Force out of Brunei – having narrowly escaped an American air raid on that tiny island – traversing west of the Formosa Strait en route back to Japan.

Admiral Kurita placed his hopes on a strategic minefield that ran from the northern tip of Formosa (present-day Taiwan) along the Ryukyu Islands and up to Honshū, which was thought to be impenetrable to American submarines and surface warships alike. Kurita placed enough faith in the minefield that he ordered his fleet not to zigzag — mind you, zigzagging is SOP for confusing enemy torpedoes and aerial bombs alike — so the ships could maintain a straight-ahead speed of 17 knots and thus expedite arrival at home port.

Lt. Cmdr. Reich and his crew had other ideas. Having begun a war patrol of the East China Sea along with the USS Kete 22 days earlier, Sealion II made initial radar contact with the Japanese formation at 0020 local time on the morning of the 21st.

At 0246, Reich fired his initial salvo of six Mark 18 electric “tin fish” at the Kongō, followed by three more “torps” three minutes later at the battleship Nagato. Two of three torpedoes fired at the first battlewagon struck home, puncturing the forward and middle sections of the vessel on the port side and flooding two of the boiler rooms. Audio of the attack was actually obtained by the sub’s crew on a sound recorder left behind by a CBS war correspondent, believed to be the only surviving sound recording of a WWII submarine attack.

Nagato, for her part, avoided the second salvo thanks to a hard turn, but the destroyer Urakaze became a proverbial sacrificial lamb, as one of the torpedos hit the magazine of the “tin can” and caused the ship to blow up and sink in seconds with a loss of all hands.

Reich initially thought he had only dented the Kongō‘s thick armor. However, flooding aboard the battleship soon got out of control, leaving the ship dead in the water, and at 0524, the ship’s magazine erupted in a tremendous blast, with the vessel disappearing beneath the waves very quickly thereafter, sinking in 350 feet (110 meters) of water. Over 1,200 of her crew perished, including her captain and Vice Adm. Matome Ugaki, head of First Battleship Division.

Reich would receive his third Navy Cross for his singular exploit, and retired from the Navy as a Vice Admiral in 1973. Eli Thomas Reich passed away from Alzheimer’s disease on November 30, 1999, at age 86, and was laid to rest at Arlington National Cemetery, Section 30, Grave 950-A. His beloved submarine, whose entire crew received the Presidential Unit Citation from Harry S. Truman on October 10, 1945, was decommissioned for good on February 20, 1970, and sunk as a larger off Newport on July 8, 1978.