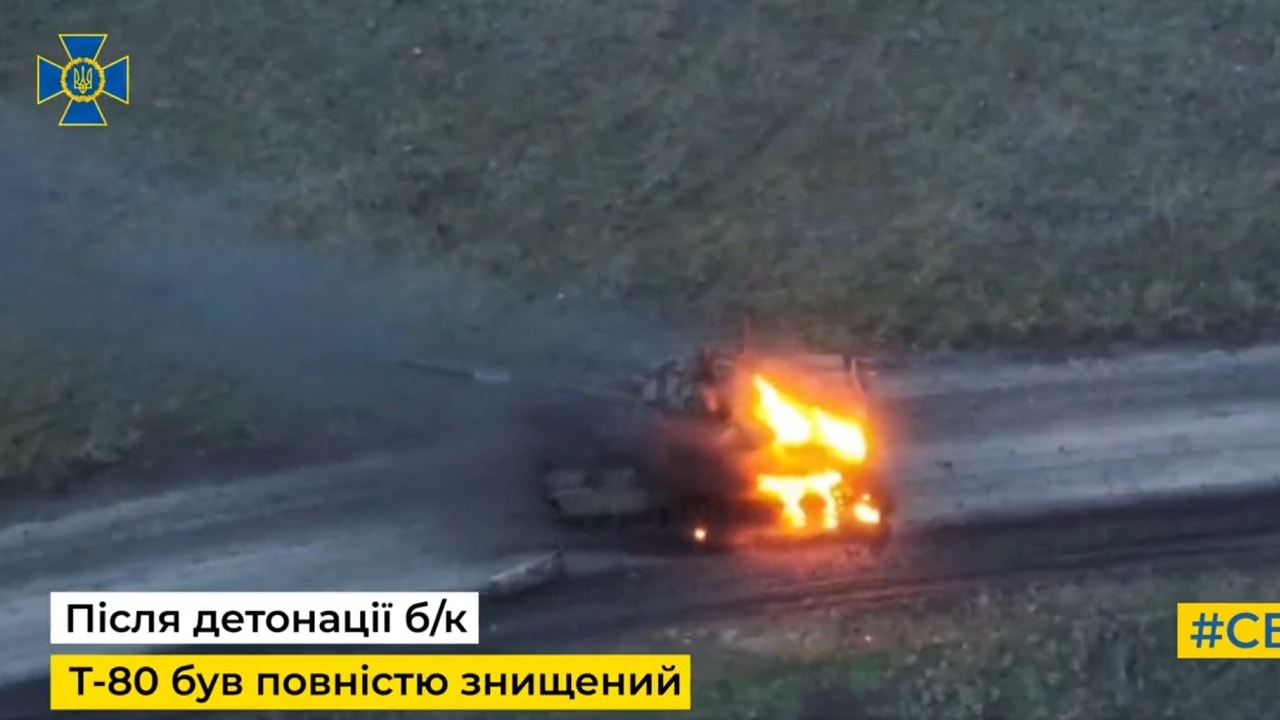 The video, which was shared by the official Security Service of Ukraine Twitter account, shows a Russian tank firing at Ukrainian positions.

The video, recorded by a rotary-blade drone, then shows the tank fleeing as Ukrainian forces return fire. The tank is narrowly missed by one projectile, which landed directly behind the tank as it fled down a road until eventually the Russian soldiers get out of the vehicle and make a run for it.

As the soldiers flee, the rear of the tank ignites. The soldiers are then seen taking cover in a residential building as the tank continues to burn.

In the original post, the Ukrainian Security Service describes how the tank was proving to be a “nightmare” for Ukrainian fighters in the region, deploying rapid shelling.

“For some time, the enemy gave our advanced positions a ‘nightmare’ using the tactics of rapid shelling from tanks,” the post reads.

“But it did not last long – one of them was exposed and destroyed by a tactical group of fighters of the Special Operations Center ‘A’ of the SBU.”

While the tank did not explode, as some Russian models often do, the fuel tank did appear to catch fire. T-80 tanks have been known to be vulnerable to these kinds of fires when ammunition penetrates the vehicles and sets the diesel fuel on fire – a fuel that is less combustible but which will burn slowly.

Last week, a German government website revealed that Germany is preparing to send seven Gepard tanks to Ukraine. The tanks will join Ukraine’s 30 air-defense tanks that are already in service protecting against Russian attacks.

The tanks, which were originally destined to be decommissioned by the German government, will arrive in Ukraine by the spring. The tanks are undergoing essential repair work before they are deployed in Ukraine, and Germany is also expected to provide additional ammunition for the tanks upon delivery.

Meanwhile, Russia is struggling to replenish its tank stocks as they are destroyed and captured on the battlefield by Ukrainian forces. According to the Under Secretary of Defense for Policy at the Pentagon, Colin Kahl, Russia has used up the vast majority of its precision-guided weapons and has probably lost half of its tanks.