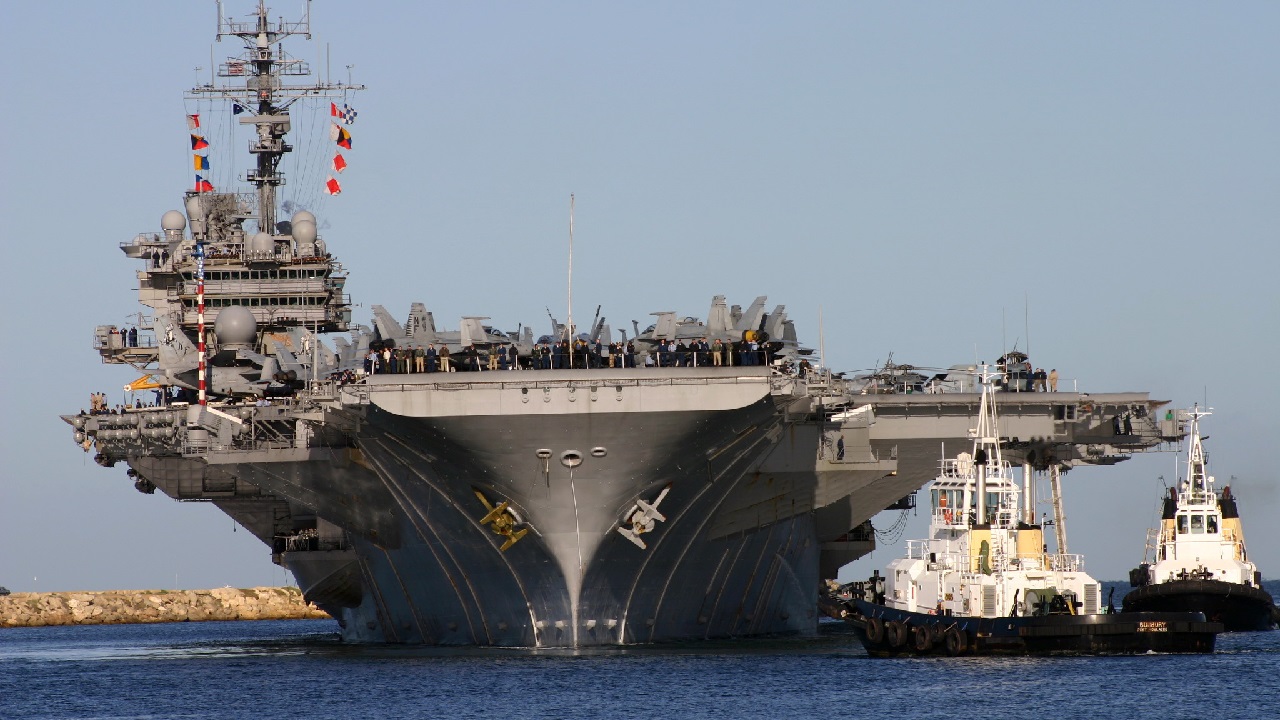 The Kitty Hawk-class carriers are not particularly well remembered. Whereas the Ford, Nimitz,  and Enterprise classes enjoy name recognition amongst the general public, the Kitty Hawk has mostly been forgotten. But the Kitty Hawk-class served valiantly for five decades – and represented important progress in US aircraft carrier design.

The Kitty Hawk carriers were designed as an incremental improvement over the preceding Forrestral-class carriers. The Forrestal-class was comprised of four boats: Forrestral (CV-59); Saratoga (CV-60); Ranger (CV-61); and Independence (CV-62). The four Forrestrals were built between 1952 and 1958; they were the first class of supercarriers with deck-edge elevators, angled decks, and high tonnage. While the Forrestral-class remained in service until 1998, the US Navy recognized the boat had some quirks – especially the elevator placements, which were situated in the launching and landing path of the waist catapults.

To offer an improved version of the Forrestral, the Navy set about building the Kitty Hawk, which was not a replacement exactly – but a supplement and a moderate improvement. The most obvious improvements on the Kitty Hawk-class is a greater overall length and more practical elevator placements: two are forward of the “island,” one is aft of the island, and one is on the portside stern. The elevator placements were more functional, and could be operated while planes were launched and landed – improving the efficiency of flight operations and increasing the boat’s sortie rate.

Three true Kitty Hawk carriers were completed: Kitty Hawk (CV-63); Constellation (CV-64), and; America (CV-66). Originally, a fourth Kitty Hawk was planned: the John F. Kennedy. And while the Kennedy was indeed built, she was so heavily modified relative to the preceding Kitty Hawks that the Kennedy was considered its own class of carrier – the only carrier in its class. The Navy had hoped the Kennedy would be nuclear powered, but Congress would not authorize it, so the boat was conventionally powered. Kennedy is about 17 feet shorter than the Kitty Hawk carriers, with a novel smokestack that tilts outboard to pump gas away from the flight deck. Kennedy also had an angled end waist, different from the other Kitty Hawks, but quite similar to the Nimitz-class carriers (which had not been built yet).

The Kitty Hawks served for decades. In the late eighties, the USS Kitty Hawk was overhauled – for $785 million – as part of the Service Life Extension Program (SLEP). Constellation was overhauled under SLEP, too – for $800 million, between 1990 and 1992. Kennedy was not upgraded under the SLEP program, but she too received a $491 million infusion to extend her service life. The America on the other hand did not receive any sort of overhaul – she met a much more unusual fate.

While originally scheduled for a SLEP overhaul, America was decommissioned – which is when things got really interesting.

Initially, the Navy planned to scrap America for parts. Then, the plan changed. Instead, America would be fired up – and intentionally sunk – as part of a live-fire exercise to study a carrier’s survivability in combat. Navy veterans who had sailed on America were not happy. Rather than sink such a storied vessel, the veterans pleaded, why not make her into a museum? The Navy disagreed; they were going to destroy America.

The USS America was sunk in 2005. For four weeks, America took a punishment, as military observers studied her carefully. Impressively, the ship would not sink under normal combat circumstances. To finally scuttle the carrier, she had to be boarded, with explosives placed internally. America proved to be an extremely tough boat; when she finally did go down, the Navy held a solemn moment of silence. Today, the carrier rests in one piece, at a depth of 16,860 feet, southeast of Cape Hatteras, North Carolina.

The America was not the last Kitty Hawk in service – that distinction belongs to the class’s namesake, the USS Kitty Hawk, which served until 2009.

In all, the Kitty Hawk had a pretty solid run – especially for a boat that was meant as just an incremental improvement over the preceding class. Kitty Hawk carriers saw action in Vietnam, Operation El Dorado Canyon, Operation Desert Storm, Operation Enduring Freedom, and more. Today, all of the Kitty Hawks have been scrapped, but you can still see the USS Kitty Hawk, briefly, in a cameo appearance standing in as the USS Nimitz for a scene in The Final Countdown.