The USS United States Could Have Been A Powerful Aircraft Carrier. Here’s Why It Was Never Built: In the history of the United States Navy, there has only been one vessel to enter service with the name USS United States, and it was actually one of the original six frigates that served as the core of the Navy in the first half of the 19th century. Three other vessels were to bear the name including a Lexington-class battlecruiser.

However, there was also the USS United States (CVA-58), which was meant to be the lead ship of a new class of supercarriers developed after the Second World War. Its design was seen as ambitious and even cutting edge but was likely entirely impractical and as a result just five days after her keel was laid down, the program was canceled.

In July 1948, President Harry S. Truman approved the construction of five new “supercarriers,” for which funds had been provided in the Naval Appropriations Act of 1949. The carrier was a radical departure from the World War II-era flattops and in some ways evoked the “streamline moderne” of the Art Deco architecture and design movement that became common with post-war automobiles and aircraft.

The proposed 65,000-ton carrier (83,000 tons fully loaded) would feature a flush-deck that was designed to launch and recover large aircraft of 100,000 pounds, which in turn could carrier the nuclear weapons of the era that weighed as much as five tons. The vessel was to be 1,000 feet long, without an island, and equipped with four aircraft elevators and four catapults. The flush deck was meant to provide more space for large bombers – although those would have to be secured to the flight deck as it would have been impossible to move them up or down in an elevator to the hangar. However a small hanger was provided for the fighter escort – and as the design evolved, more space was given for the fighters. It was planned that the vessel’s air wing would be made up of about a dozen bombers as well as nearly fifty fighters.

Whereas the primary mission was to carry long-range bomber aircraft, the United States-class was also intended to provide tactical air support for the air and amphibious forces, as well as to conduct sea control operations.

Designed as a conventional carrier, it would require eight Foster-Wheeler boilers and four Westinghouse turbines, which could produce 280,000 hp while four screws could allow the massive vessel to reach speeds in excess of 33 knots.

Construction costs were estimated to be around $190 million ($2.05 billion in 2020 dollars), while the cost of the task force to accompany the massive warship would have driven the total price tag to more than $1.265 billion.

The design was also not without some issues.

The lack of an island meant the ship lacked a position for radar, but also other command and control capabilities. A small tower-like platform could help direct movement on the flight deck, but radar, navigation, war planning, and other operations would have been relegated to a specially outfitted command ship cruiser. Instead of being the flagship of a strike group, the United States and the other carriers would have been floating airfields or arsenal ships.

Issues such as smoke from the power plants and how it would be diverted away from the flight deck had to be resolved. And again the Navy’s bombers would have to remain on the flight deck during an entire voyage.

It wasn’t an enemy adversary that eventually “sank” the project, but rather the United States Air Force, which had viewed the carrier as an embodiment of the Navy’s nuclear aspirations. The Joint Chief of Staff seemed to agree that the carrier’s main function would only serve to duplicate the role of the Air Force. Just days after the keel of the lead vessel had been laid down, the program was canceled.

Secretary of the Navy John Sullivan immediately resigned, while the subsequent “Revolt of the Admirals” resulted in Admiral Louis Denfeld being relieved of his position as Chief of Naval Operations.

It didn’t mark the end for the supercarrier, and instead, just five years later the Navy moved forward with the more conventionally figured USS Forrestal-class. As nuclear weapons shrank in size it was also determined that a massive warship designed to accommodate carriers wasn’t required. In the 1950s, nuclear weapons were sent to sea on the USS Franklin D. Roosevelt – a carrier far smaller than the planned USS United States. 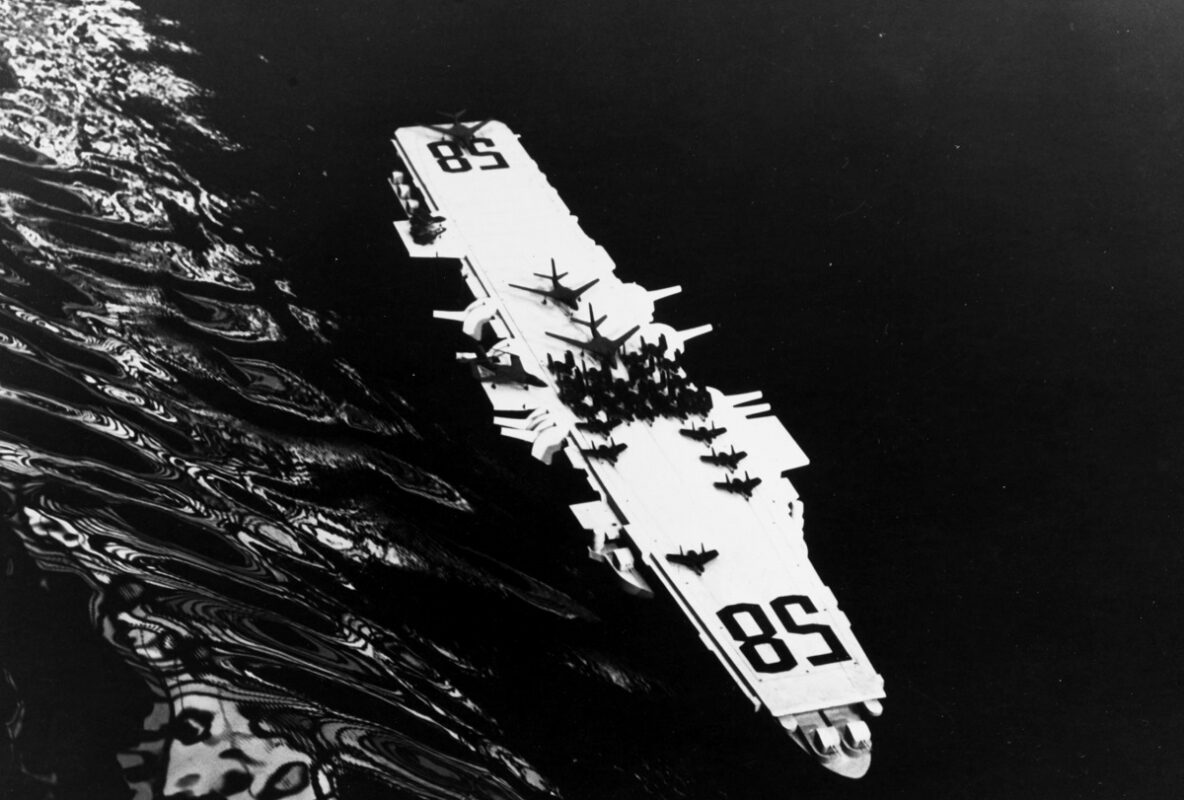 A preliminary design model of the proposed U.S. Navy aircraft carrier USS United States (CVA-58) undergoing seakeeping tests at the David Taylor Model Basin, Carderock, Maryland (USA), circa 1947. This is an early version of the CVA-58 design, without catapult sponsons. Note the folding smokestacks in the down position, as they would have been during flight operations. Aircraft models on the flight deck appear to represent the Vought F7U Cutlass fighter and a notional heavy attack bomber. 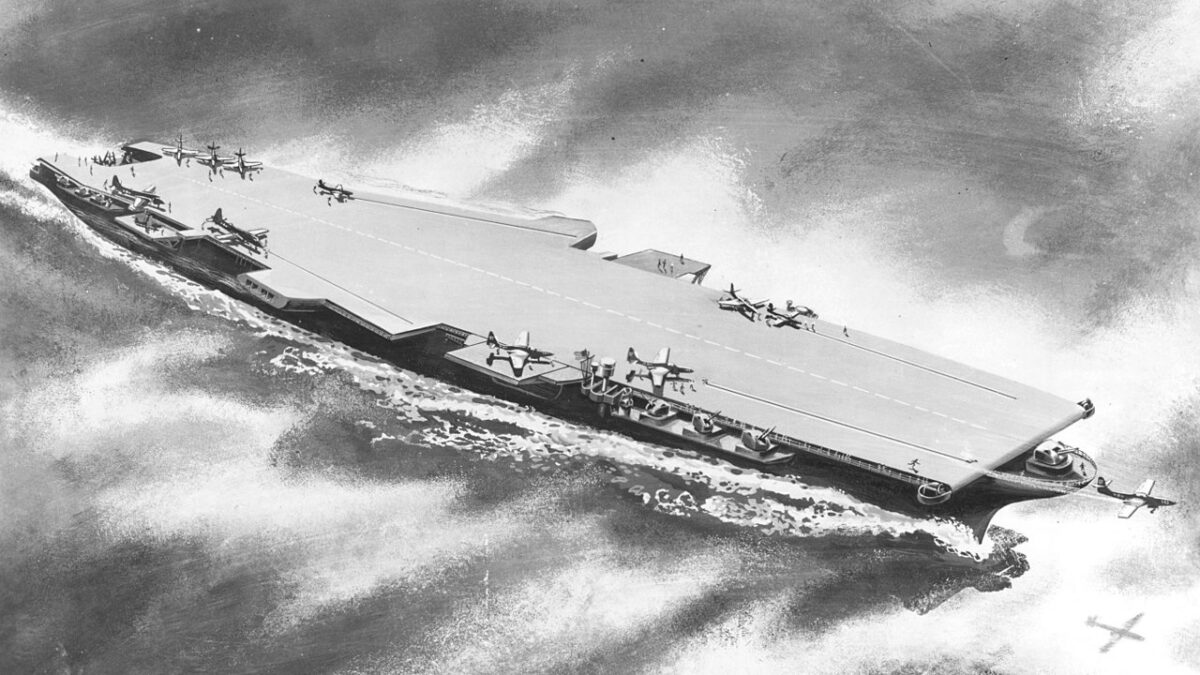 Artist’s conception of the U.S. Navy aircraft carrier USS United States (CVA-58) by Bruno Figallo, October 1948, showing the ship’s approximate planned configuration as of that time. Many details, among them the location of smoke stacks, elevators and the retractable bridge, were then still not finally decided. This carrier was laid down at Newport News, Virginia (USA), on 18 April 1949 and cancelled by the Secretary of Defense a few days later.

Peter Suciu, a Forbes Magazine Contributing Writer, is a Michigan-based journalist who has contributed to more than four dozen magazines, newspapers and websites. He regularly writes about military small arms, and is the author of several books on military headgear including A Gallery of Military Headdress, which is available on Amazon.com.