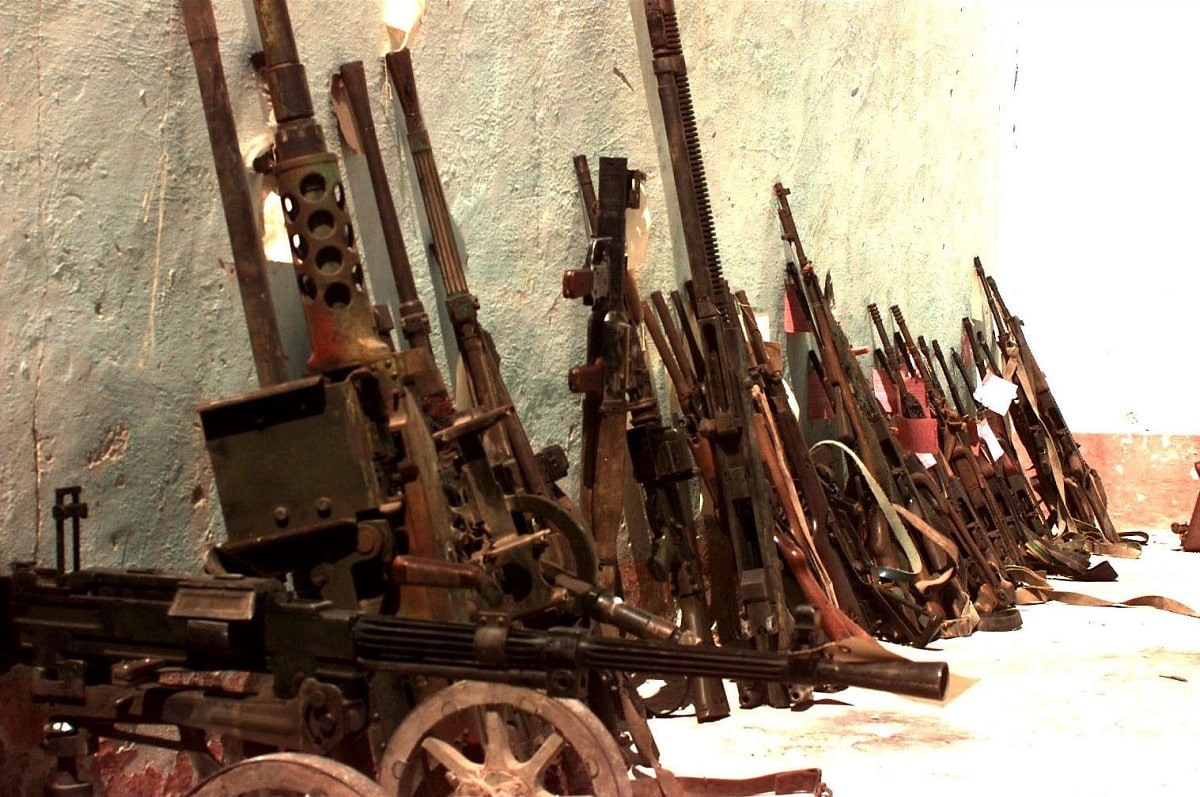 Confiscated Somali weapons at checkpoint Condor in Marka, Somalia. They are mostly small arms and crew weapons that are lined up against the wall of a building. The weapons were taken by the 2/87th Infantry Regiment, 10th Mountain Division, Fort Drum, New York, and await shipment to Mogadishu. This mission is in direct support of Operation Restore Hope.

Somalia faces its most serious crisis in 15 years: President Mohamed Abdullahi Farmaajo’s presidential term expired but he refuses to step down until new elections can be held, a process that opposition leaders say he has deliberately undermined. Last week, violence erupted in central Mogadishu when forces loyal to Farmaajo fired on protestors demanding he steps down. Farmaajo’s government has now banned such gatherings, although opposition leaders say they will go ahead with new protests on Friday.

On Sunday, Said Abdullahi Deni, the leader of Puntland, one of Somalia’s five federal states, delivered a blunt speech about the danger in the current situation and was unabashedly critical of Farmaajo. In short, he castigated the president for seeking to rule by force rather than by democratic consensus.

Most Somalis listen to Deni’s words through the context of history they lived through or their elders related to them: Farmaajo’s uncle Siad Barre destroyed the country with his centralization drive, sparked an armed rebellion, engaged in genocide against the Isaaq clan that predominates in Somaliland, and generally drove Somalia into the ground.

Somali clan dynamics are as important, even though foreign diplomats too often downplay them in favor of theoretical constructs built in Washington or Brussels about how government might be. Here, too, Deni’s speech was exceptionally important not only in its contents, but also in who delivered it. Especially within the same clan, Somali culture is circumspect and politicians often allow their opponents to save face. Both Deni and Farmaajo are from the Darood clan, so Somalis would ordinarily expect Deni to protect his fellow clansman. That he did not is significant, as it underscores that in contrast to Farmaajo, Deni is willing to subordinate clan to nation. That many Darood applaud Deni underscores Somalis do not see his speech as self-serving.

Nevertheless, U.S. Ambassador Donald Yamamoto and UN Representative James Swan continue to embrace Farmaajo’s legitimacy despite the expiration of his term and his dwindling support among ordinary Somalis. Both diplomats refuse to abandon their Farmaajo experiment, even if they have little to show for the billions of dollars invested in the former president. If Farmaajo again orders forces subsidized by the international community to fire on protestors, they will have blood on their hands.

There is a way out. Opposition leaders have called on the United Nations to form a leaders’ council to run Somali affairs on a transitional basis until elections occur. Yamamoto and Swan should not oppose this common-sense solution: Somalia is a federal government, and state governments should make most decisions anyway. Indeed, the transitional body might simply divide aid, assistance, and international grants to the state leaders according to state capacity and population. The closer such money gets to the citizens it is to help, the less likely its diversion.

Deni’s proposals to limit Farmaajo’s executive power and to nullify legislation taken after the government’s term in office expired is also common sense, as is his demand that future talks be held in Nairobi or Djibouti. So long as Farmaajo wields counter-terror forces against political opposition, the country is not safe for dialogue. Indeed, Deni and others understand that Farmaajo not only was unable to protect Abdirahman Omar, the popular mayor of Mogadishu who died in a bomb blast in his office in July 2019 (which barely missed Swan), but he may also have even been complicit in his murder.

Somalia’s stability matters, especially given the danger that Al Shabaab or even Islamic State terrorists who have taken root there could destabilize neighboring countries and hamper major sea-lanes. Resources are scarce but, happily for Washington and the international community, what Somalia needs is not money—indeed, cash has become the problem in Somalia rather than the solution—but rather a common-sense solution that upholds Somali law and custom. It is time for President Joe Biden and UN Secretary-General António Guterres to give them one, especially if their respective representatives have become part of the problem rather than its solution.