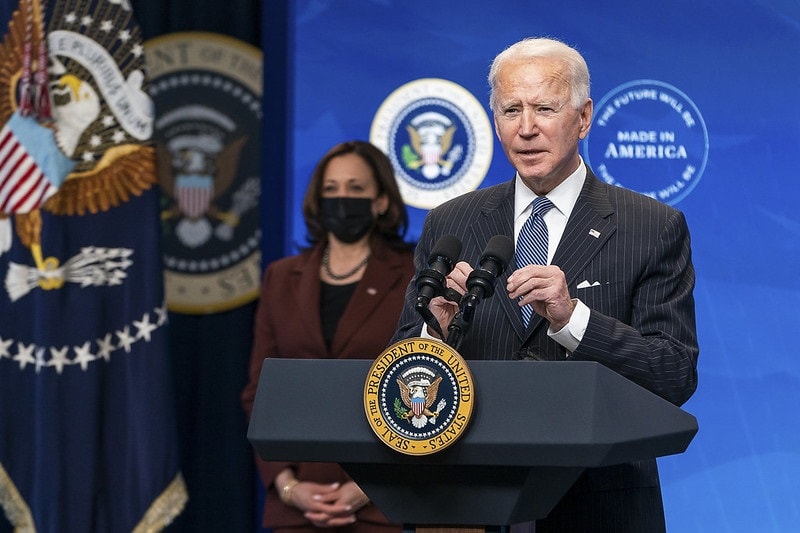 All eyes are on Afghanistan after President Joe Biden’s announcement that he will withdraw American troops from the country by September 11, 2021. While Biden and his Secretary of State Antony Blinken promised to return human rights and combatting gender discrimination to the center of American foreign policy, the Afghan pullback against the backdrop of Taliban resurgence puts Afghan women at risk. The Taliban might be extreme in their subjugation of women, but backsliding on women’s rights increasingly spans the Middle East and South Asia.

Biden moved early on to help preserve women’s rights in the region: On March 8, for example, he signed an executive order creating a gender policy council. While introducing the State Department’s 2021 country reports on human rights practices, Blinken also announced he would reverse predecessor Mike Pompeo’s prioritization of religious freedom over other rights: “There is no hierarchy that makes some rights more important than others,” Blinken explained.

Still, words and councils alone are not enough, and a scattershot approach to rights risks effectiveness and leverage. Consider: On March 20, U.S. NATO ally Turkey withdrew from the Istanbul Convention – a decade-old treaty ratified by 34 countries to protect women from domestic violence and to end legal reprieve for assailants. Turkey was the first country to ratify the treaty, with unanimous support from its Parliament and public support from Turkish leader Recep Tayyip Erdogan’s own daughter, then the vice-chair of Kadem, the Turkish Women and Democracy Association. News of the withdrawal led to protests by women’s organizations across Turkey, incensed by their government’s dismissal of gender-based violence. During the first seven years of Islamist rule in Turkey, the murder rate of women increased 1,400 percent. As if to underscore his personal disdain for women, Erdogan then denied the female president of the European Commission a seat in a meeting while offering her male colleague Charles Michel one.

Turkey is not alone. Last month in Egypt, a draft law that would limit a woman’s freedom to marry or divorce, retain guardianship over her children, and travel outside of the country without the consent of a male guardian leaked to the press. The proposal, now before a joint parliamentary religious-legislative committee, is not simply a generational reversal of women’s rights in Egypt; it would, per Nehad Abu El Komsan, the chairwoman and senior lawyer of the Egyptian Center for Women’s Rights, “take [Egyptian women] back 200 years.”

Restrictions that the Egyptian bill aims to implement are already in place across the border in Libya. In 2015, the Libyan parliament passed law number 14, nullifying a woman’s right to sign her own marriage contract. According to Libyan law, women also cannot pass along citizenship to their children and their testimony does not carry the same legal weight as a man’s. There are no laws prohibiting domestic violence, sexual harassment in the workplace or schools, marital rape, or child marriages. According to the Georgetown Institute for Women, Peace, and Security, Libya “ranks in the bottom five countries globally on discriminatory norms.”

Apologists will insist that adherence to the Istanbul Convention doesn’t trump local laws and traditions, hence the tolerance for so-called reservations to its ratification. But when those reservations nullify the basic intent of a convention intended to protect women from violence and discrimination, states cannot legitimately claim they are adherents. Erdogan and his allies say they are simply protecting Turkey from the “normalization of homosexuality.” Regressive governments clap back at colonialist Westerners seeking to impose their values.  Third world feminists argue Western interpretations of human rights are an expression of colonialism. Too often, Western progressives agree so as not to be accused of abetting racism.

Herein lies the irony: The Biden administration seeks to assuage a progressive base by putting gender rights first; but by ignoring or refusing to stand up for the universality of such rights, the State Department is allowing Arab states, Turkey, and Afghanistan to unravel them without consequence. Egypt receives billions of dollars in U.S. taxpayer assistance annually, while the Afghanistan war cost the U.S. trillions. The Obama administration—and many now serving in top positions in the Biden administration—helped Libyans overthrow a 42-year dictatorship. Blinken, meanwhile, has increased Turkey’s prestige by making Istanbul the site of the forthcoming Afghanistan peace conference.

Women’s rights are about more than executive orders and posturing. Biden and Blinken have an opportunity: True champions would push back everywhere. They would not turn their backs on Afghan women who have had unfettered access to education for only a generation. Nor would they ignore the leverage they have among partners like Turkey and Egypt. In releasing the State Department human rights report, Blinken said, “Standing up for human rights everywhere is in America’s interests.” The silence in the wake of Biden’s Afghanistan announcement and the refusal to push back hard on Turkey and Egypt suggest that the Biden team is not yet ready to move from words to action.