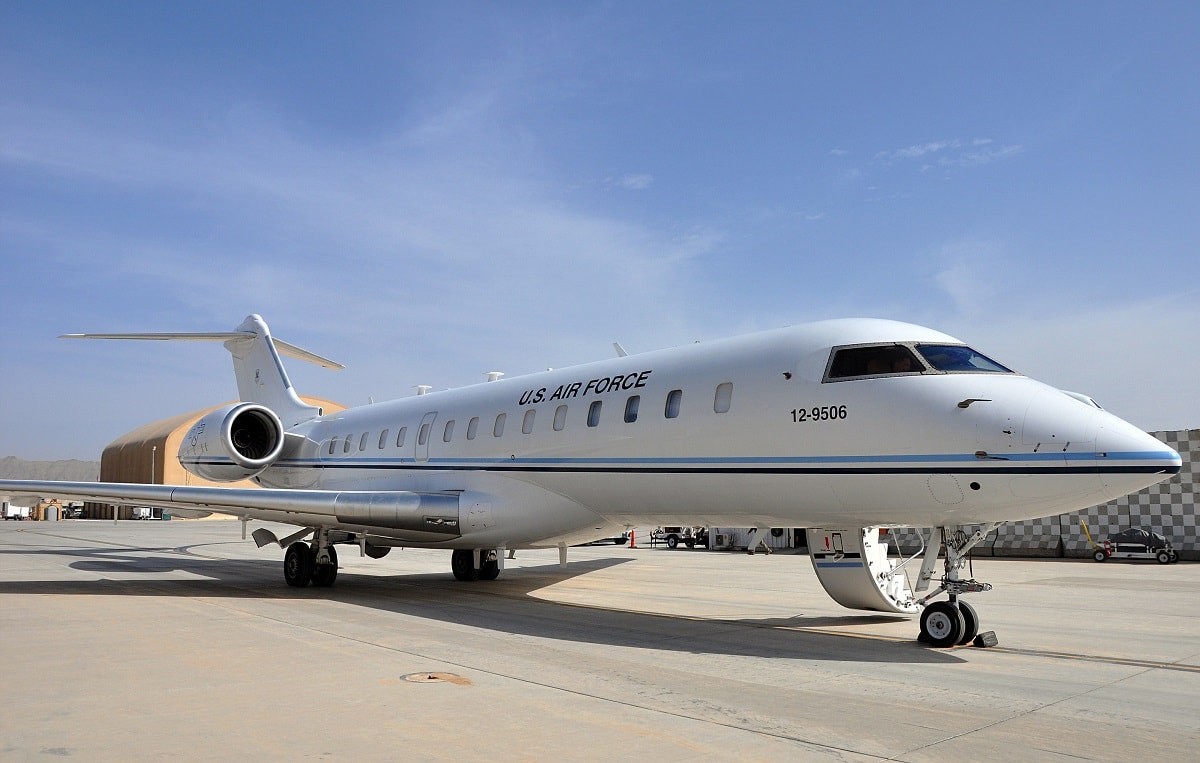 A 430th Expeditionary Electronic Combat Squadron E-11A aircraft outfitted with a Battlefield Airborne Communications Node sits on the runway at Kandahar Airfield, Afghanistan, April 4, 2019. The 430th EECS is the only unit that operates these aircraft with the BACN payload. (U.S. Air Force photo by Capt. Anna-Marie Wyant)

This month, the United States Air Force awarded a $464.8 million contract to Learjet Inc. for six Bombardier Global 6000 jets. The large cabin jets, which serve in the business/corporate sector, won’t be used to shuttle the Air Force’s brass – but rather will be modified to serve as Battlefield Airborne Communications Node aircraft.

Designated as the E-11A, the six jets will be assigned to the Air Combat Command where the aircraft will operate as a high-altitude, loitering communications node to air and ground forces. The contract will include the engineering and modification work to transform the basic corporate jet into the flying communication node.

In that capacity, the E-11A can provide a node for voice communication, as well as a crucial link to share data, video and images. The payload can also provide relay, bridging and data translation for platforms that are not able to communicate due to terrain impediments including units that are separated by mountains, but also systems that use different voice and data link systems, Defense News reported.

“Bombardier is proud to be chosen once again by the U.S. Air Force to provide our high-performing Global aircraft and our unique expertise in support of the BACN program,” said Michel Ouellette, executive vice president, Specialized Aircraft, Programs and Engineering, Bombardier. “Our U.S.-based employees are honored to be lending their skills in support of this elite project.”

Under the terms of the new contract, which was announced last week by the Department of Defense (DoD), the deliveries of the six aircraft will occur over the next five years, through May 2026. The contract immediately obligated $70 million to pay for the first Global 6000 out of a potential total of six planes. The service had already received $63 million for the E-11 program in the fiscal year 2021 (FY21) budget to procure the first of the aircraft.

The new Bombardier Global 6000 aircraft will complement the Air Force’s fleet of Bombardier Global Express jets that served as an earlier version of the E-11A. Four of those aircraft entered the Air Force’s inventory beginning in 2007, while one was lost in a crash in Afghanistan in January 2020. The crash killed Lt. Col. Paul K. Voss and Capt. Ryan S. Phaneuf, both assigned to the 430th Expeditionary Combat Squadron at Kandahar Airfield, Afghanistan

The E-11A fleet of aircraft is based at Hanscom Air Force Base (AFB) in the U.S. state of Massachusetts but deployed around the world based on the need arises.