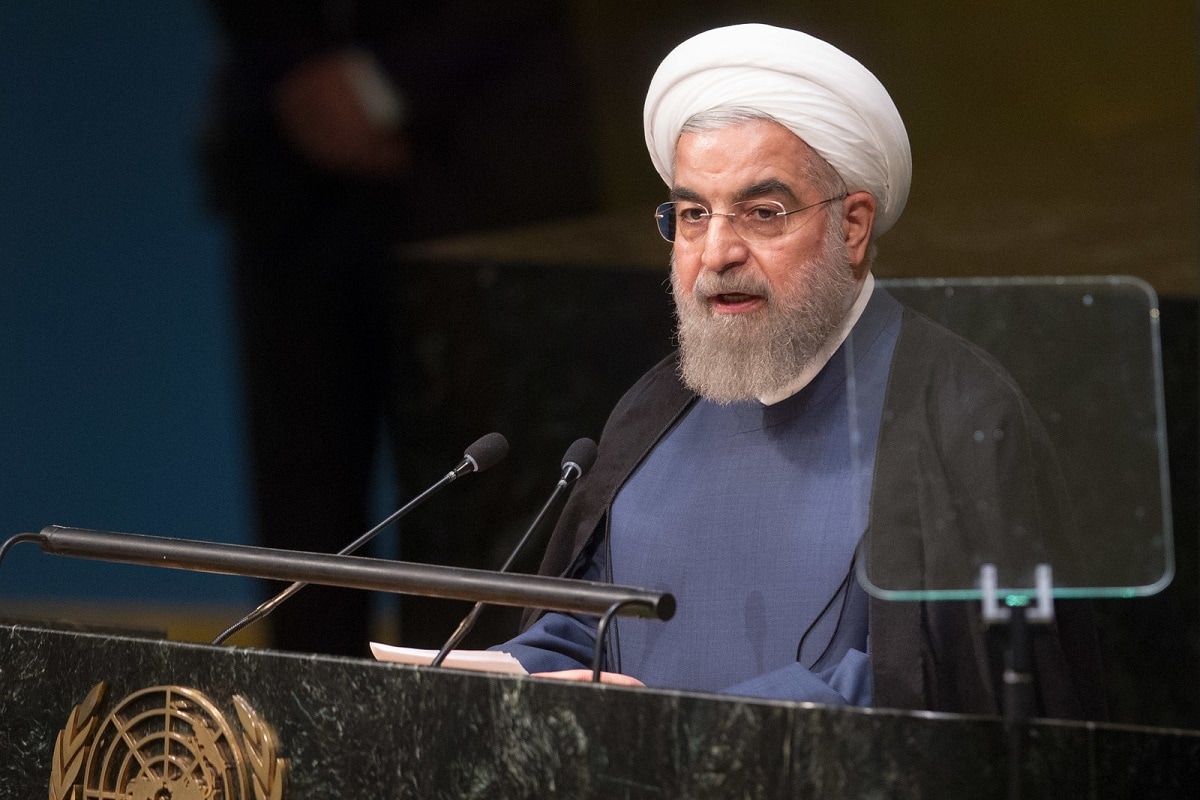 Hassan Rouhani, President of the Islamic Republic of Iran, addresses the general debate of the General Assembly’s seventieth session.

With the presidential candidate disqualifications announced on May 25, the Islamic Republic of Iran (IRI) has once again demonstrated the sham nature of its elections.

Eliminating all of the major moderate and pragmatist candidates, including former Speaker of the Parliament Ali Larijani and current Vice-President Eshaq Jahangiri, the unaccountable Guardian Council has virtually guaranteed the victory of the conservative Head of the Judiciary Ebrahim Raisi. This ballot manipulation evidences two key things: (1) elite recognition of the regime’s diminished domestic legitimacy, and (2) the contempt the elites have for the Iranian people.

While the regime has disqualified numerous candidates in prior presidential elections, it has permitted competition among different factions of regime supporters to include those often characterized as moderates or pragmatists in the West. For example, Mohammad Khatami was able to run and win elections in 1997 and 2001, Mehdi Karroubi was permitted to run in 2005, and Karroubi and Mir Hossein Mousavi were approved to run in 2009.

However, the disputed election results of 2009, wherein alleged voting abnormalities appeared to help the conservative incumbent Mahmoud Ahmadinejad retain office, led to unprecedented popular protests against the regime. Street demonstrations caused the regime to turn to security forces to restore order, thereby strengthening the hand of such organizations as the Islamic Revolutionary Guard Corps (IRGC). The regime engineered the victory of long-time regime insider but perceived moderate, Hassan Rouhani in 2013, hoping to restore popular support.  However, the inability of Rouhani to deliver results, evident in continued widespread corruption, the collapse of the Iranian rial, and the IRGC’s execution of its own foreign policy, has led to increased popular resentment of the Islamist regime.

Now, as the regime faces the impending end of octogenarian Supreme Leader Ayatollah Ali Khamenei’s reign and the question of succession, the conservative elites seek to minimize flashpoints for popular protests. Accordingly, they have chosen to eliminate any meaningful competition for Raisi so as to preempt not only any chance of an electoral surprise but to eliminate the likelihood of popular demonstrations when election results are announced.  In so doing, the regime is tacitly admitting it has lost any claim to popular legitimacy. The disqualifications will almost certainly result in significantly reduced voter turnout, a metric the regime has regularly touted as evidence of its popular standing, but now a price the regime seems willing to pay given its clear lack of confidence in obtaining the preferred outcome in a competitive election.

Larijani’s disqualification is particularly surprising given the prominent role he and his family have held in the regime. Indeed, Ali Larijani’s brother is Ayatollah Sadegh Amoli Larijani, Raisi’s predecessor as judiciary head and a current member of the Guardian Council, who voiced his dissent to the Council’s action in an unusually public manner. With this, it is notable that Raisi has emphasized an anti-corruption agenda that is implicitly critical of his predecessor, while both Raisi and Sadegh Larijani are among the most prominent possible successors to Khamenei. Although Iranian domestic politics have long been marked by factionalization, the intra-elite discord on display here provides a preview of the internal infighting likely to emerge as regime insiders jockey for position in post-Khamenei Iran.

Secondly, the disqualification of any real competition for Raisi shows the disregard of the IRI leaders for the Iranian people.  Although ultimate power has resided with the Supreme Leader since the founding of the IRI, the republican aspects of the regime provided people with some means of political expression.  Even with candidates pared down to those deemed acceptable by the Guardian Council, there was an avenue for popular political participation.  The complete elimination of choice presented by the approved candidates for the June presidential election thus marks a significant break between the regime and the populace.

With the Islamic Revolution of 1979 and the Iran-Iraq War of the 1980s now history lessons rather than lived experiences for the majority of the Iranian population, the original pillars of regime support have atrophied.  Unaccountable political leadership and failed economic policies embody the clerical government.  Iranians rightfully ask why the clerics should remain in charge as the economy collapses yet the regime squanders resources in Syria, Lebanon, Yemen, Iraq, and Gaza.

The Guardian Council’s disqualifications make clear that Khamenei’s embrace of coercive force, in the form of the IRGC and its domestic auxiliary the Basij, over popular legitimacy is nearly complete. Yet this shift simultaneously ensures a more brittle regime, incapable of the flexibility to deal with internal discord. Raisi will enjoy victory in this electoral charade but may find that the eventual question of Khamenei’s succession poses a crisis that a regime devoid of popular legitimacy cannot survive.

Clifton W. Sherrill is Associate Professor of International Relations at Troy University and author of Losing Legitimacy: The End of Khomeini’s Charismatic Shadow and Regional Security.

Clifton W. Sherrill is Associate Professor of International Relations at Troy University and author of Losing Legitimacy: The End of Khomeini’s Charismatic Shadow and Regional Security.