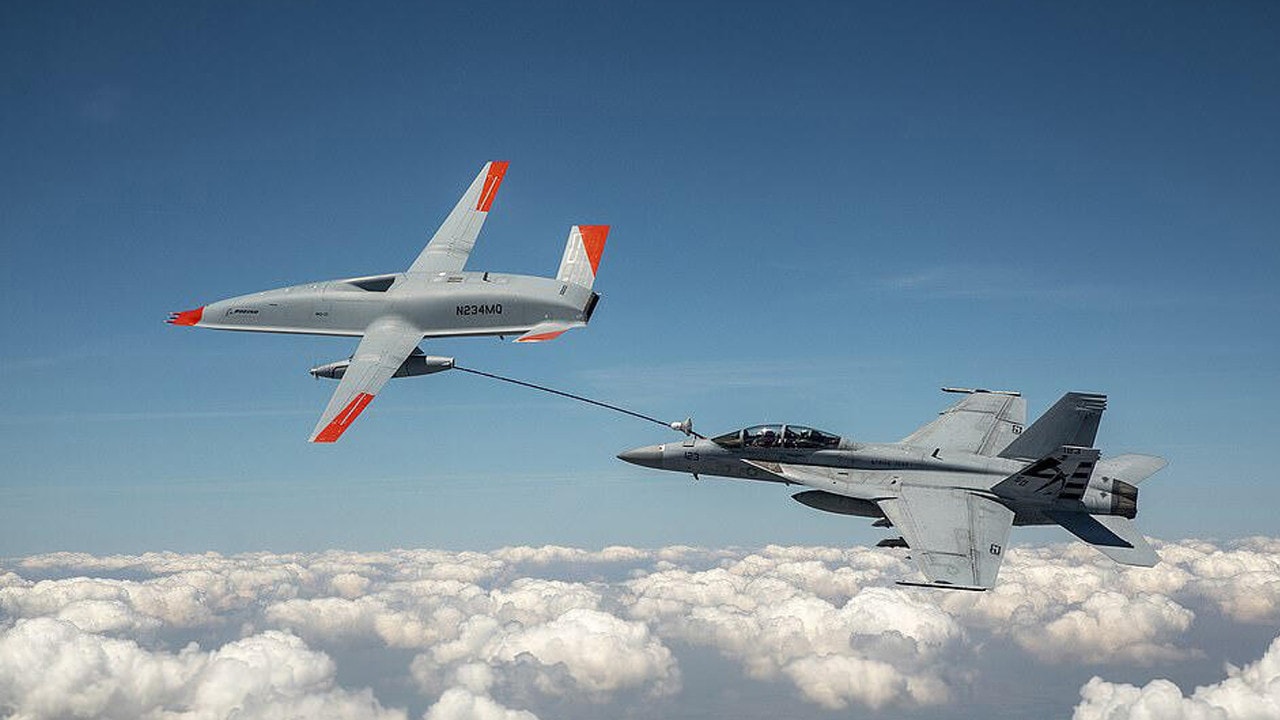 Consider it a case of “self-serve” in the sky. A United States Navy F/A-18 was successfully refueled by an MQ-25 Stingray unmanned aerial vehicle, which served as an airborne tanker. The successful flight demonstration, which took place on June 4, involved the Stingray taking off from MidAmerica St. Louis Airport in Mascoutah, Illinois, and fulfilling its tanker mission using the Navy’s standard probe-and-drogue aerial refueling method with the Navy’s aircraft.

During last week’s flight, the F/A-18 Super Hornet acted as the receiver and approached the Boeing-owned MQ-25 T1 test asset. It conducted a formation evaluation, wake survey, drogue tracking and then finally plugged with the unmanned tanker.

“This flight lays the foundation for integration into the carrier environment, allowing for greater capability toward manned-unmanned teaming concepts,” said Rear Adm. Brian Corey who oversees the Program Executive Office for Unmanned Aviation and Strike Weapons. “MQ-25 will greatly increase the range and endurance of the future carrier air wing – equipping our aircraft carriers with additional assets well into the future.”

The MQ-25 T1 was able to successfully transfer the fuel from its Aerial Refueling Store (ARS) to the Navy’s combat aircraft.

“This is our mission, an unmanned aircraft that frees our strike fighters from the tanker role, and provides the Carrier Air Wing with greater range, flexibility and capability,” added Capt. Chad Reed, program manager for the Navy’s Unmanned Carrier Aviation program office (PMA-268). “Seeing the MQ-25 fulfilling its primary tasking today, fueling an F/A-18, is a significant and exciting moment for the Navy and shows concrete progress toward realizing MQ-25’s capabilities for the fleet.”

It was the culmination of a series of test flights that began last year.

The autonomous MQ-25 had completed its first flight with an ARS last December. That initial two-and-a-half-hour flight was designed to test the aircraft’s aerodynamics with the ARS mounted under its wings. That flight also began at MidAmerica St. Louis Airport.

The Boeing-owned T1 test asset has served as a predecessor to the engineering development model aircraft being produced under a 2018 contract Department of Defense (DoD) award with the U.S. Navy. The T1 has been used for early learning and discovery, and it laid out the foundation to allow for the further development of the MQ-25. Following its very first flight in 2019, the T1 accumulated approximately thirty hours in the air before the planned modification to install the ARS.

This month’s refueling test was an important milestone in the program. It will provide important early data on airwake interactions, as well as guidance and control, according to Reed. The team will then analyze that data to determine if any adjustments are needed and make software updates early, with no impact to the program’s test schedule.

“This history-making event is a credit to our joint Boeing and Navy team that is all-in on delivering MQ-25’s critical aerial refueling capability to the fleet as soon as possible,” said Leanne Caret, president and CEO of Boeing Defense, Space & Security. “Their work is the driving force behind the safe and secure integration of unmanned systems in the immediate future of defense operations.”

MQ-25 T1 will continue flight testing prior to being shipped to Norfolk, Virginia, for deck handling trials aboard a U.S. Navy carrier later this year.

The Boeing-owned T1 test asset will continue to serve as a predecessor to the seven test aircraft that Boeing is currently manufacturing under a 2018 contract award. The MQ-25 will assume the tanking role currently performed by F/A-18s, allowing for better use of the combat strike fighters and helping extend the range of the carrier air wing.

The Navy has said that the MQ-25 will serve as the foundational to its Unmanned Campaign Framework, and the T1 test aircraft is the first step toward a future fleet augmented by unmanned systems to pace the evolving challenges of the 21st century.