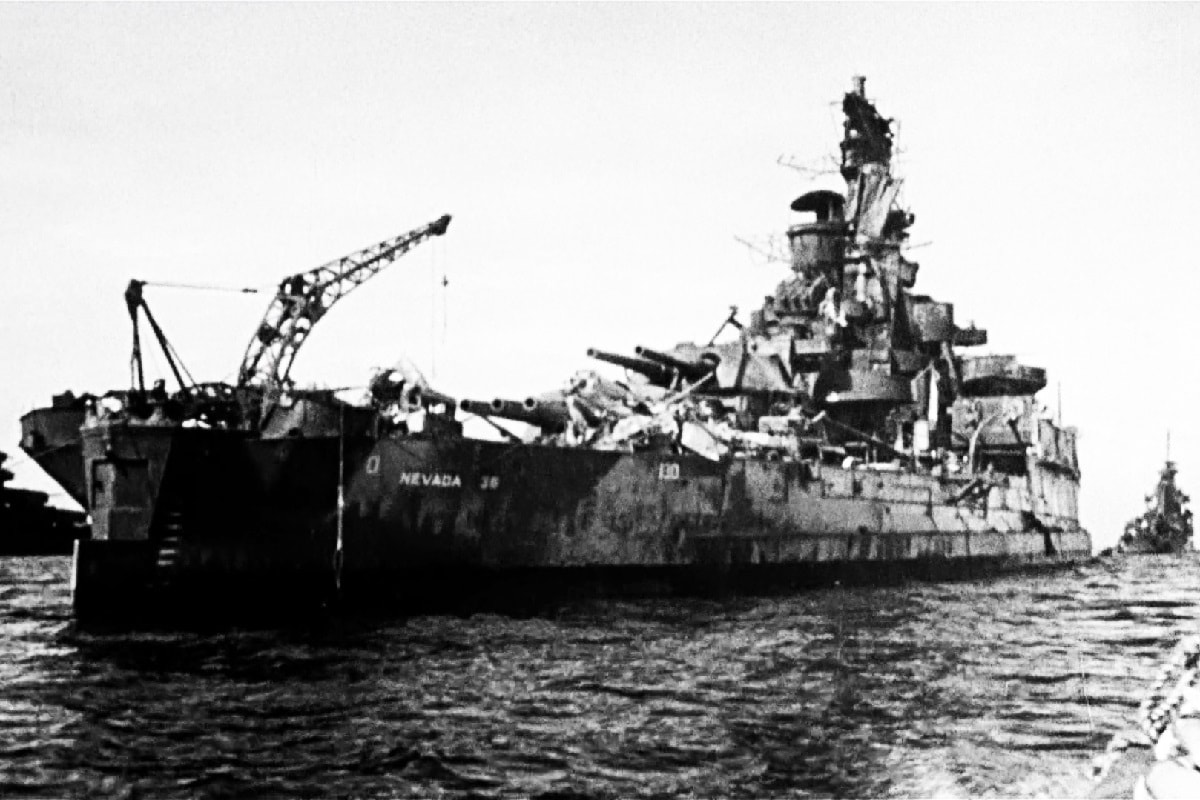 While burrowing through the vast Manhattan Project archives historian Alex Wellerstein turned up evidence that Bikini wasn’t the first Pacific island in the atomic crosshairs. Another atoll may have been the earliest target considered by the Manhattan Project.

For a time before the bombings of Hiroshima and Nagasaki, the United States considered nuking the Japanese fleet at anchor — a kind of reverse, radioactive Pearl Harbor.

When the Manhattan Project got off the ground in 1943, both the atomic bomb and the defeat of Japan looked like a long time and a lot of work away.

Hard fighting that year in New Guinea, Bougainville, the Solomons and Tarawa showed just how much time and work. But U.S. Navy planners thought the biggest target and the hardest nut in the Pacific was the huge Japanese naval base at the remote Micronesian atoll of Chuuk, once known as Truk.

After ruling Micronesia for a quarter-century, the Japanese navy had turned Chuuk into its own version of Pearl Harbor.

The atoll – a 40-mile-wide lagoon ringed and dotted with tall green tropical islands – sheltered everything from battleships to transports. Drydocks and tank farms supported the ships. Airfields serviced hundreds of planes. A fleet radio station reached across the entire Japanese island frontier.

The carriers that fought in the Coral Sea and the battlewagons that savaged Guadalcanal came from Chuuk.

During a May 5, 1943 meeting the Manhattan Engineering District’s Military Policy Committee decided:

The point of use of the first bomb was discussed and the general view appeared to be that its best point of use would be on a Japanese fleet concentration in the Harbor of Truk. General Steyer suggested Tokio [sic] but it was pointed out that the bomb should be used where, if it failed to go off, it would land in water of sufficient depth to prevent easy salvage. The Japanese were selected as they would not be so apt to secure knowledge from it as would the Germans.

After the meat grinder battle of Tarawa in November 1943, Chuuk loomed over the western horizon. However, this early decision to nuke an atoll instead of a city fell by the wayside as the war continued. By early 1944, America’s burgeoning carrier strength in the Central Pacific allowed commanders to attack Chuuk using conventional firepower.

Between Feb. 17 and 18, 1944, Operation Hailstone’s 500 aircraft, five fleet carriers, four light carriers, seven battleships and an armada of other ships pounded the Japanese base into rubble and scrap. American bombs, torpedoes and gunfire sank 12 warships, 32 transports and destroyed 270 planes.

However, just as the Japanese attack on Hawaii missed the U.S. carriers, so the American attack on Chuuk missed Japan’s capital ships — they’d withdrawn to Palau just days before. The attack cut the atoll off from its supply lines and its garrison eventually starved. The American campaign rolled west towards the Marianas and Chuuk became forgotten.

However, the idea of nuking a fleet at anchor popped up again. Lewis Strauss, a future chairman of the Atomic Energy Commission worried about the atomic bomb’s effects on the U.S. Navy:

If such a test is not made, there will be loose talk to the effect that the fleet is obsolete in the face of this new weapon and this will militate against appropriations to preserve a postwar Navy of the size now planned.

Just weeks after Hiroshima and Nagasaki, Connecticut senator Brien McMahon called for such a test. The Army Air Forces brass and the Joint Chiefs concurred and by November 1945 plans were underway.

The military chose Bikini Atoll for its remoteness and prevailing winds. A native Bikinian population of only 146 simplified relocation for Operation Crossroads, though with tragic consequences for the exiled Bikinians.

The vast seaborne operation also tested the remnants of the vast U.S. Navy armada that won the Pacific War. Despite a massive demobilization after September 1945, the Pentagon put together a joint task force of 42,000 men, 242 ships and 156 aircraft and sent them off to blow up paradise.

The 71 vessels anchored in Bikini’s 180-foot-deep lagoon were hit by bombs identical to the Fat Man device dropped on Nagasaki. Weaponeers wanted the best comparison possible between a nuked city and a nuked fleet.

The first test, Shot Able on June 30, 1946, fell from a B-29 and landed 2,100 feet off its target. The screw-up marred the test data and provoked a military investigation. Shot Able nevertheless sank five ships and consumed the “demon core,” the plutonium that had already killed two Los Alamos scientists.

Wartime studies of underwater explosions in support of the plan to nuke Chuuk helped plan Shot Baker, Crossroads’ underwater test. Baker produced what is perhaps the most iconic image of a mushroom cloud, its size made even bigger by its eruption from a vast lagoon, hurling seawater and coral reef and whole battleships into the sky.

The great bombings left the lagoons of both Bikini and Chuuk littered with shipwrecks. Nature has miraculously restored their waters and made the sunken fleets among the greatest diving destinations in the world. Despite the thriving population and a developing economy, Chuuk Lagoon remains a wonderland of sea life and corals grown up over the corpses of warships, transports, trucks and planes. 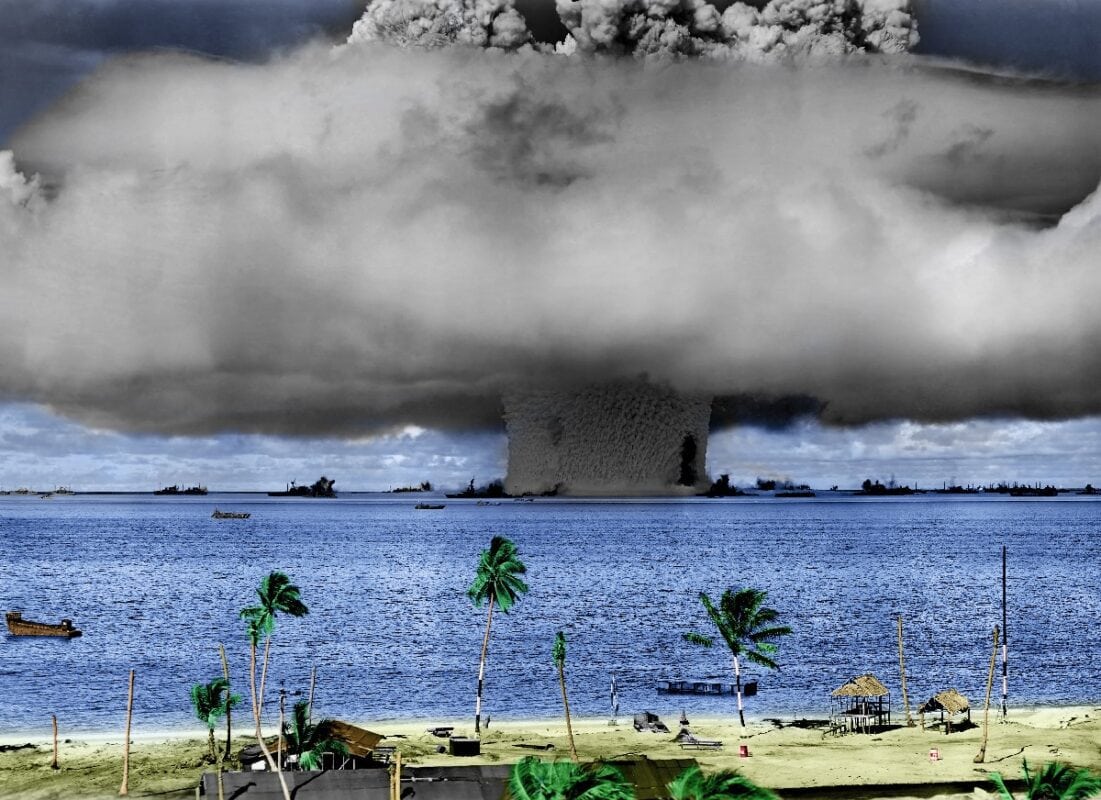 The “Baker” explosion, part of Operation Crossroads, a nuclear weapon test by the United States military at Bikini Atoll, Micronesia, on 25 July 1946. The wider, exterior cloud is actually just a condensation cloud caused by the Wilson chamber effect, and was very brief.

Sea life thrives amidst the giant wrecks of Bikini too, but without rather than in spite of people. The Bikinian exile which began 69 years ago may become a permanent diaspora as the rising sea claims the atoll.