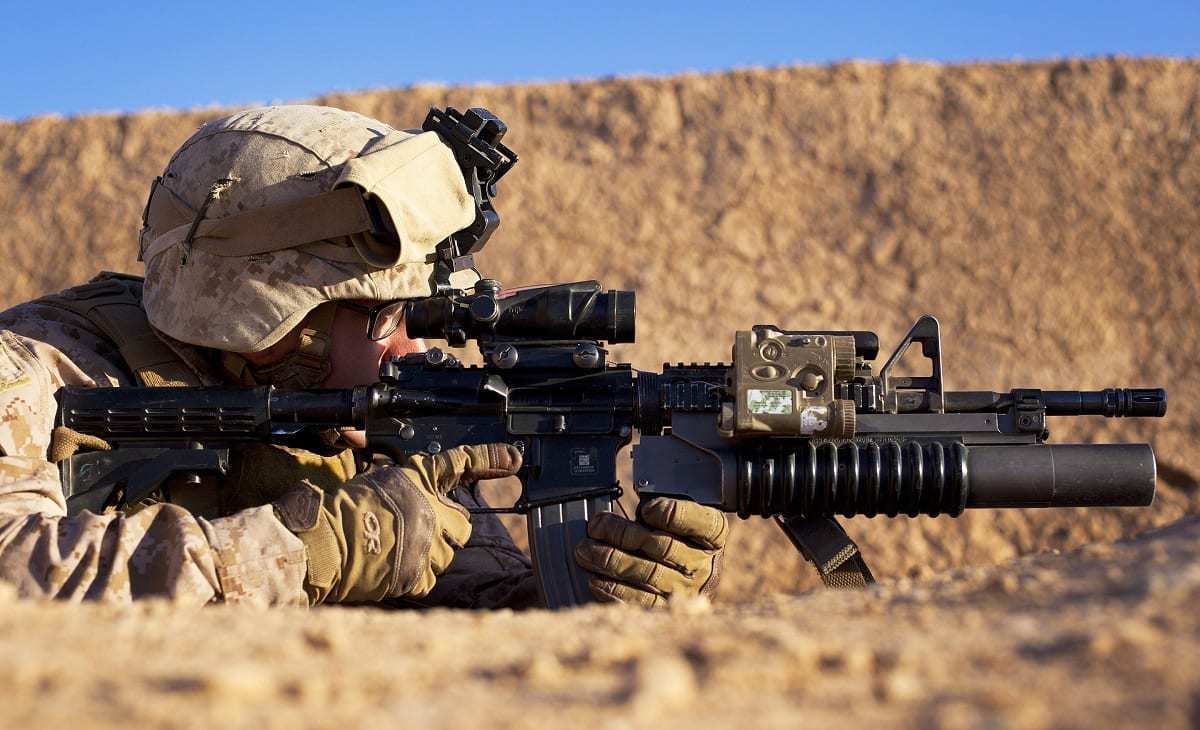 U.S. troops landing on the Senkaku Islands? Could be.

Last year Lieutenant General Kevin Schneider, the commander of U.S. forces based in Japan, launched the U.S.-Japanese exercise Keen Sword 21 with words to that effect. Keen Sword brings together units from all four U.S. military services together with their brethren from the Japan Self-Defense Forces (JSDF). Announced General Schneider on board a Japanese warship, the allied force demonstrated “the ability to move a few people” around Japan’s southwestern islands.

But he added that “the same capability could be used to deploy combat troops to defend the Senkaku Islands or respond to other crises and contingencies.”

Schneider’s specific mention of the Senkakus was telling. Let’s speculate about what a deployment to the uninhabited islets—which adjoin Japan’s Ryukyu Islands but constitute an archipelago distinct from the Ryukyus—might look like. Start with the extreme case. If troops alighted on the Senkakus, would they build a permanent base? Doubtful—though less doubtful than in the past. After all, China’s island- and base-building project in the South China Sea proves that engineers can transmogrify unlikely sites into military facilities given enough labor, resources, and political resolve.

Tokyo and Washington could afford Beijing the sincerest form of flattery, and without exerting the same degree of effort. After all, the Senkakus already exist. Allied civil engineers would doubtless improve the terrain in the interest of withstanding air, missile, or amphibian attack. They would have no need to manufacture the substructure for a base out of reefs, atolls, or the seafloor the way Chinese engineers excavated in the South China Sea. In that sense planting an installation on the islets would be easy and straightforward.

The strategic logic for emplacing troops on the Senkakus is blurrier than the physical feasibility of doing so. Ask the masters. Sea-power prophet Alfred Thayer Mahan used three parameters to judge a site’s suitability to host a base—namely position, strength, and resources. A site had to occupy a favorable geographic position to gladden Mahan’s heart. The Senkakus abound by this measure. They lie about 90 miles north of the southernmost tip of the Ryukyus chain and about 110 miles from the closest point on the Taiwanese coast.

If soldiers from China’s People’s Liberation Army (PLA) ensconced themselves in the archipelago they would hold a flanking position within striking range of Taiwan and the midsection of Asia’s first island chain. Wresting control of the Senkakus from Japan would not deliver Taiwan into Beijing’s hands or fracture the first island chain all by itself—but PLA strategists might deem it a useful incremental gain that hastens China toward those goals. We can debate whether the allies will or should fortify the islands; you can bet China’s military would give it a go once in possession of them.

Denying China a strategic position of great price could warrant mounting a Japanese or allied presence on the islets. In all likelihood Mahan would approve of such a move in geostrategic terms.

And strength? By that Mahan means a site’s defenses, natural or manmade. Islands have moats, while opposed amphibious landings rank among the most difficult of military operations. Defenders can dig into Pacific islands, helping them stubbornly resist assault. Imperial Japan raised island defense to a high and bloody art during World War II. Democratic Japan could try to replicate the imperial legacy, showing Chinese commanders they cannot seize ground in the Senkakus without a lengthy and pricey slog fraught with peril. Beijing could desist from the attempt if suitably impressed.

Strategic theory will take Tokyo’s side should it occupy the Senkakus before any fighting breaks out around the islets. General Helmuth von Moltke, the soldier-strategist credited with helping orchestrate German unification, once proclaimed that the strongest form of warfare is strategic offense coupled with tactical defense. In other words, a combatant entertaining offensive aims grabs some valuable but undefended object and dares an antagonist to come and take it back.

In Moltke’s view advantages in terrain, initiative, and morale go to the first mover.

Japan already controls the Senkaku Islands, simplifying the strategically offensive part of Moltke’s formula. Landing forces and keeping them there would satisfy the tactically defensive part. Adding U.S. troops to a composite U.S.-Japanese garrison would certify that Washington has skin in the game of honoring its treaty commitments to Tokyo—much as stationing a U.S. Army brigade in Berlin put Soviet Bloc leaders on notice that America would fight for the encircled city.

Unless Tokyo takes active measures to defend the Senkakus, the Japan Coast Guard will remain their chief protector. But entrusting military defense to a law-enforcement body makes no sense if Beijing resolves to make its move. The PLA Navy would simply brush aside lightly armed Japanese cutters. That being the case, it will be up to the Self-Defense Forces to tap the islands’ natural defenses, much as wise armed forces fortify major bases to ward off seaborne or airborne assault. Whether the JSDF should act is a political decision to be made in Tokyo in consultation with Washington.

And lastly, by resources Mahan refers to the ability of the countryside surrounding a base to support those who run the facility along with shipping that tarries there. Bases are resource-intensive, levying voracious demand for food, fuel, ammunition, and stores of all kinds. Alternatively, he suggests that stores could come in from farther away provided the installation is lashed up with suppliers via robust transport infrastructure. The Senkakus—outcroppings of rock dotting the East China Sea—plainly fall short by this standard. The islets cannot support any base worth the name.

Logistics, then, poses a forbidding hurdle to erecting a standing military base in the archipelago. The sad plight of Philippine marines who uphold Manila’s claim to sovereignty over Second Thomas Shoal through their physical presence underlines the problem. A handful of marines live on board a decrepit U.S.-built amphibious transport deliberately grounded there. They endure a constant siege by Chinese vessels, which use their hulls to block out resupply shipments in hopes of starving out the contingent. The Philippine armed forces have to go to extravagant lengths to run stores past the blockade.

Blockade runners certainly couldn’t defy China’s cordon on a grand enough scale to support a full-fledged base. Now, China might be unable to replicate its “cabbage strategy” in the East China Sea, where the balance of forces is not nearly so lopsided as in the South China Sea. Still, Mahan would frown on the notion of constructing a base that wants for adequate logistics. Here, though, the Philippine example suggests an alternative that might be viable: a smaller-scale presence that is less dependent on regular resupply and thus less vulnerable to Chinese pressure.

A small body of defenders could rough it.

That’s probably the sort of thing General Schneider had in mind when he posited deploying allied troops for a Senkakus contingency—a leaner and perhaps intermittent presence in the archipelago. Island combat is not a new thing for either ally. For some years the JSDF has been preparing amphibious forces, doctrine, and strategy to defend Japan’s southwestern islands should they come under PLA attack. It has fielded an Amphibious Rapid Deployment Brigade and sought to remake the army into a more mobile “Adaptive Agile Ground Defense Force” able to lend the rapid-deployment brigade heavy backup.

Ground Self-Defense Force commanders envision “three key steps in remote islands defense,” namely “‘prepositioning units,’ ‘rapidly deploying units,’ and ‘recapturing invaded islands.’” Reasonably enough, their concept of operations anticipates a range of contingencies. It holds out the possibility of Moltkean operations in which Japanese soldiers take the initiative, entrenching themselves on southwestern islands—perhaps even the Senkakus—as a preemptive measure. Then they would defend the islands against assault from a position of strength. The leaner the force, the better, in case the PLA disputes airborne or seaborne resupply efforts with some measure of success.

Recapturing invaded islands, on the other hand, is a more hazardous prospect. It assumes the JSDF has surrendered the advantage to PLA forces that abided by Moltke’s logic, rushing to the contested ground first and mounting a tactical defense of their own. And that is certainly a possibility unless Tokyo is prepared to garrison all of the southwestern islands ahead of time. Accordingly, it’s worth thinking ahead now about how to impose logistical nightmares on China after it grabs real estate.

Seapower would be critical to such a venture. If Japanese and U.S. maritime forces could reimpose command of the air and sea around an occupied island, they would confront the PLA with an uncomfortable case of role reversal. Chinese occupiers could find themselves playing the part of beleaguered Philippine marines at Second Thomas Shoal. Allied air and sea forces would prosecute their own style of cabbage strategy—and might inflict a humiliating military and diplomatic setback on Beijing in the bargain.

Meanwhile, the U.S. armed forces have embraced the U.S. Marine Corps’ emerging concept of expeditionary advanced base operations, which envisions small bodies of missile-armed troops flitting from island to island in winsome amphibious craft. Controlling turf is a worthy goal in its own right, but marine commanders mainly anticipate using islands as firing platforms for mobile anti-ship and anti-air weaponry. Nimble amphibious forces will be hard to uproot from their island bastions even as they make things tough on hostile forces that dare to come within reach.

Japanese and U.S. amphibious services, then, have put forward like-minded warfare concepts and started putting them into practical effect. They commenced practicing techniques for combined amphibious operations long before Keen Sword 21. In fact, a boat unit from the JSDF Amphibious Rapid Deployment Brigade embarked with the USS America expeditionary strike group for maneuvers in the Philippine Sea last February, before the madness that is coronavirus set in.

The upshot is this: the allies seem to have in mind not a standing presence on the Senkakus, let alone a permanent base, but the capability to land there in a hurry, establish potent defenses and defy a PLA that is not especially well versed in amphibian combat to evict them. There are pros and cons to such a come-and-go scheme. One hopes Tokyo and Washington have agreed on triggers that should set it in motion. Otherwise, they could flounder while negotiating in a moment of crisis—and unwittingly grant the PLA the time to purloin and consolidate its island redoubt.

Let’s invite the ghost of Helmuth von Moltke to U.S.-Japanese councils of war.

James Holmes is J. C. Wylie Chair of Maritime Strategy at the Naval War College. His books have been named to the U.S. Navy, Marine Corps, and Indo-Pacific Command professional reading lists. The views voiced here are his alone.