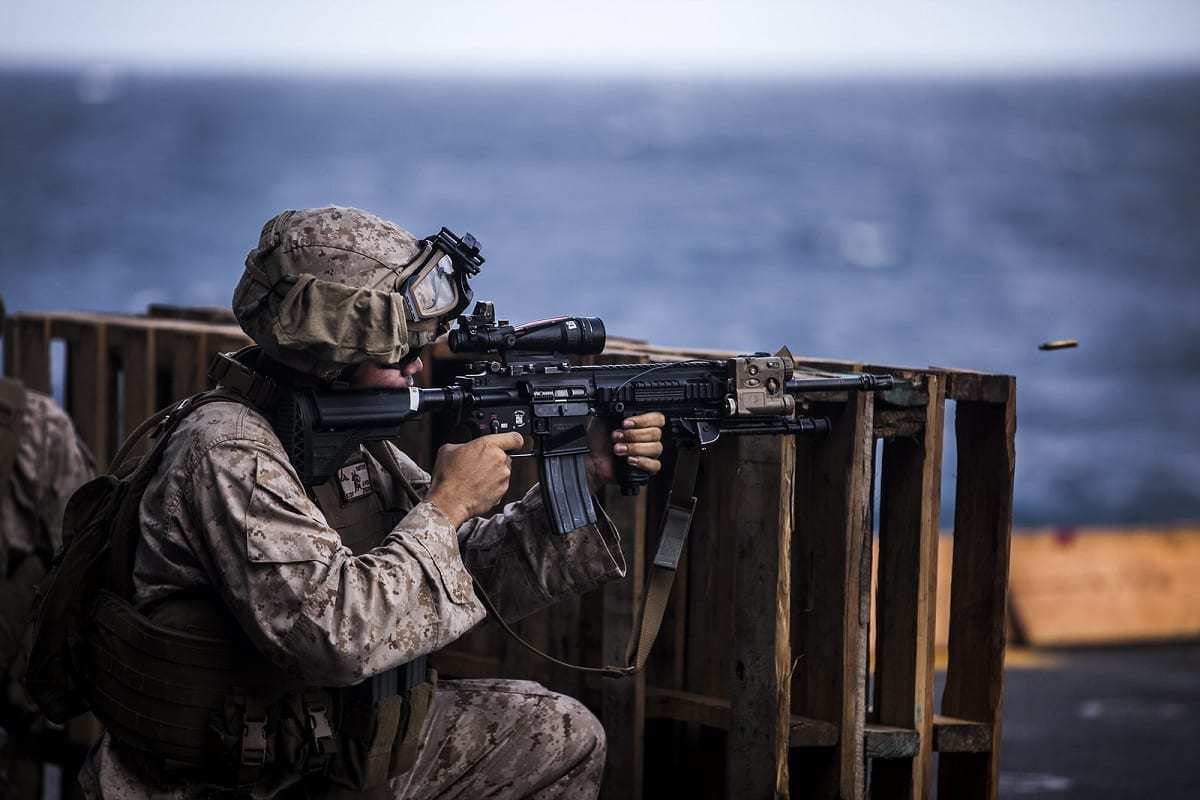 A Marine with 15th Marine Expeditionary Unit, engages his target during a deck shoot aboard the amphibious assault ship USS Essex. The Marines practiced shooting from behind a barricade to simulate staying behind cover during a fire fight.

As the United States military shifts its focus away from counter-terror operations around the world, and back to a great power competition—which is primarily directed against China and Russia—the U.S. Navy could find itself at a significant disadvantage in terms of numbers.

The Chinese People’s Liberation Army Navy (PLAN) surpassed the U.S. Navy as the largest in the world and is continuing an ambitious building campaign that will widen the gap. Additionally, many of the Navy’s warships may be ill-suited to future roles.

While the Department of Defense (DoD) has been exploring options that include smaller autonomous vessels to close the gap, last year, writing for Sandboxx, military analyst Alex Hollings offered a more novel solution. He suggested looking not just towards future technology, but to past military practices to make up the numbers.

Hollings suggested a return of the “Privateer.”

The very notion of a privateer would no doubt be quite controversial, as many times in history the line between the privateer blurred with that of the pirate. The difference was that a state or delegated authority issued a commission, typically referred to as “letter of marque,” which empowered the holder to carry out acts for the state on the high seas—and this included attacking foreign vessels and taking them as “prizes.”

The crews of the privateers could sell the captured ship, its cargo, and even ransom the crew—with the proceeds split between the privateer’s sponsor (which could include the nation), the shipowner(s), captain, and crew. A portion of the prize went to the issuer of the commission. In theory, the letter of marque was meant to protect those acting as privateers from the accusations that they were in fact, pirates.

The practice began as early as the thirteenth century as the nations of Europe sought to utilize enterprising individuals to make up for the lack of a well-equipped navy. The practice increased substantially in the sixteenth century with the colonization of North and South America as English raiders—often known as “Sea Dogs”—where they were sent by the Crown to loot Spanish vessels and bring back the treasure. Men such as Sir Francis Drake and Walter Raleigh acted in the interests of Queen Elizabeth I, and the raids continued until the early seventeenth century.

However, the policy of privateers continued for another two centuries and during King George’s War in the eighteenth century, some 36,000 Americans served as privateers at one point or another. During the American Revolution, the Continental Congress as well as some state governments employed privateers to conduct “legal piracy,” while the practice was used again during the War or 1812.

During the American Civil War, the Confederate States also issued letters of marque to privately-owned vessels, but in those cases, the privateers acted more as blockade runners as they were no match for the more powerful Union Navy, which often protected its merchant vessels.

In April 1856 the Paris Declaration Respecting Maritime Law, which was written by France and Great Britain, was agreed to by fifty-five nations. Its primary goal was to abolish privateering, and the United States was one of the initial signatories. However, the United States did adopt the terms of the declaration during the Civil War while it also abided by the law during the Spanish-American War.

The rules contained in the declaration have been considered a part of the general principles of current international law, and the United States has abided by the provisions.

Private Security on the High Seas

As Holling noted in his article, the terms of privateer and pirate may suggest an entirely unconventional approach to modern warfare, but the premise is in place. It could be akin to the relationship the United States maintains with private security firms such as Blackwater, which has already conducted operations at sea.

Blackwater’s armed patrol craft have been used to police the waters off the Horn of Africa to combat Somali pirates, while privately owned boats now patrol the Indian Ocean. The question is whether such private operations and military contractors would be enough to close the gap with China.

This issue of employing privateers has been addressed before, where these “mercenaries at sea” could offer a low-cost tool to enhance deterrence in peacetime and gain an advantage in wartime.

The other question is whether it is necessary even, as it is unlikely that the United States would ever face China alone. China may have a vast fleet—the largest in the world—but its size isn’t larger than the U.S. Navy and that of the United Kingdom, Japan, Australia, Thailand, India, and other partners that could join a coalition.

Privateers could have a purpose to play—and anti-piracy efforts could certainly be one—but whether it would aid in great power competition remains debatable.