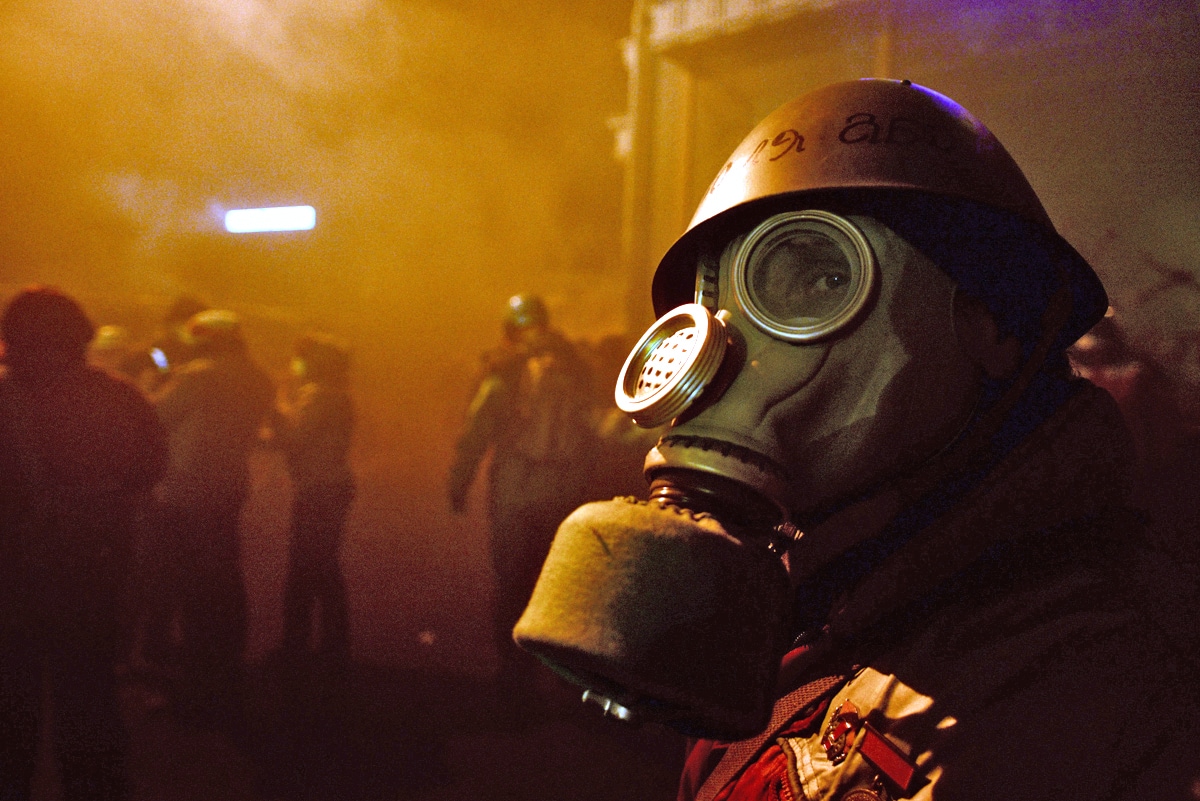 With the “Great War“ in seemingly a stalemate situation, the Germans in late April of 1915 introduced a horrific and new weapon. For a conflict that is known for reaching new heights in man’s inhumanity to man, this new weapon remains so insidious and nefarious that it was never used on such a massive scale ever again. It was poison gas, a weapon that has been feared over the years since almost as much as nuclear war. For soldiers, it has added a new piece of equipment to the standard list of equipment, the gas mask.

While the first widespread use of poison gas occurred on April 22, 1915, near Ypres, there had been previous small experiments by the Germans in the weeks prior. But it was that calm April day that marked how devious a weapon gas could be, and while the truth is that gas actually killed very few combatants when compared to the vast numbers who gave their lives in the war (according to some sources as many as 93 percent of gas casualties returned to duty within a few weeks), it was quite a success as a psychological weapon.

The first chlorine gas attack, which hit French Colonial and Canadian troops, appeared as a yellowish-green cloud. When inhaled it destroyed the alveoli of the lungs, causing men to essentially “drown” on the liquid created by their own bodies. This attack caused a panic leading to a massive retreat, which was only brought under control by the Canadian forces. So devastating was this attack that it almost allowed for a German breakthrough. As a result, Allied forces tried to respond and struggled to find effective countermeasures. These early “gas masks” were nothing more than cotton wool pads or cloth soaked in water or in many cases urine. But interestingly these were not the first true “gas masks.”

As far back as ancient times, Greeks used sponges as masks to protect the wearer from smoke and other hazardous fumes, both on and off the battlefield. But it was much later, in the nineteenth century that American Lewis Haslett invented a device that filtered dust from the air. This evolved in the next half-century into devices used by miners and for tunneling. However, gas mask protection went into full gear in 1915 following the use of gas by the Germans at Ypres.

Both the British and French looked to devise new ways of protecting soldiers against this new sinister form of attack. The basic cloth and cotton pads evolved into strips of chemically-soaked fabric called the Black Veil Respirator. The next step was to develop into a hood worn completely over the head. Developed by Captain Cluny Macpherson, a medical officer to the Newfoundland Regiment, this hood featured a single windowed visor to allow the user to see. This was known the Hypo helmet unofficially but had the official name as British Smoke Hood.

It was essentially a khaki-colored flannel bag soaked in a solution of glycerin and sodium thiosulphate—thus a “hypo solution.” It was meant to protect against chlorine directly and thus couldn’t protect against other gases, notably phosgene, which was developed over the summer of 1915 and proved far more powerful than chlorine while being relatively difficult to detect.

For this gas, the British developed the “P helmet”—also known as the PHG or PH helmet, which was officially called the Tube Helmet as the wear had an exhalation valve for the mouth. This was still basically a bag that was worn over the head but it featured two mica eyepieces to allow users to see—whereas the original smoke hood had the single visor. More importantly, this later version offered improved chemical impregnation, but it was still a dreadful solution, made worse because the impregnating solution sometimes was so thickly applied that it made a sticky mess.

This dubious hood was finally superseded by the main British gas mask of the First World War, the Small Box Respirator (SBR)—although interestingly enough the first version was known as the Large Box Respirator (LBR), which proved to be too bulky, as it needed a box canister to be carried on the back. However, the LBR’s development led to the SBR, which featured a single-piece, close-fitting rubberized mask with eyepieces. The box filter was actually worn around the neck in a canvas carrying bag. The system offered the benefit that the SBR could be upgraded as more effective filter technology was introduced. It is also worth noting that the LBRs were apparently produced in large numbers as these were issued to rearguard troops and artillery personnel.

It is also worth noting that one form of gas was so deadly that no gas mask was truly effective. This was mustard gas, which caused severe damage simply by making contact with the skin. No successful or effective countermeasure was found during the war, and this made Scottish Highland regiments especially vulnerable as they were still wearing kilts in the trenches. At various points, the troops actually took to wearing women’s tights as a form of protection.

The French meanwhile first used protective goggles and a filter over the mouth. The results were not good as gas could easily penetrate the goggles, causing serious eye irritation. By October of 1915, it was reported that some 100 different devices were tested. But a single solution was found; it would become the M-2 gas mask. This consisted of an all-in-one unit that featured a chemically impregnated pad made up of many layers along with a built-in eyepiece. The first model was made in only a single size and featured a single panoramic eyepiece made of cellophane. The subsequent version, the second model—something that causes confusion as both are still known as the M-2—incorporated two circular eyepieces that were double-layered with an outer glass layer along with an inner cellophane layer.

Soon after its introduction, a design flaw was discovered with the second model of the M-2 gas mask. After a half-hour of wear, the eyepieces could fog over. Thus the glass layer was eventually removed, making for yet another variation that is encountered today. 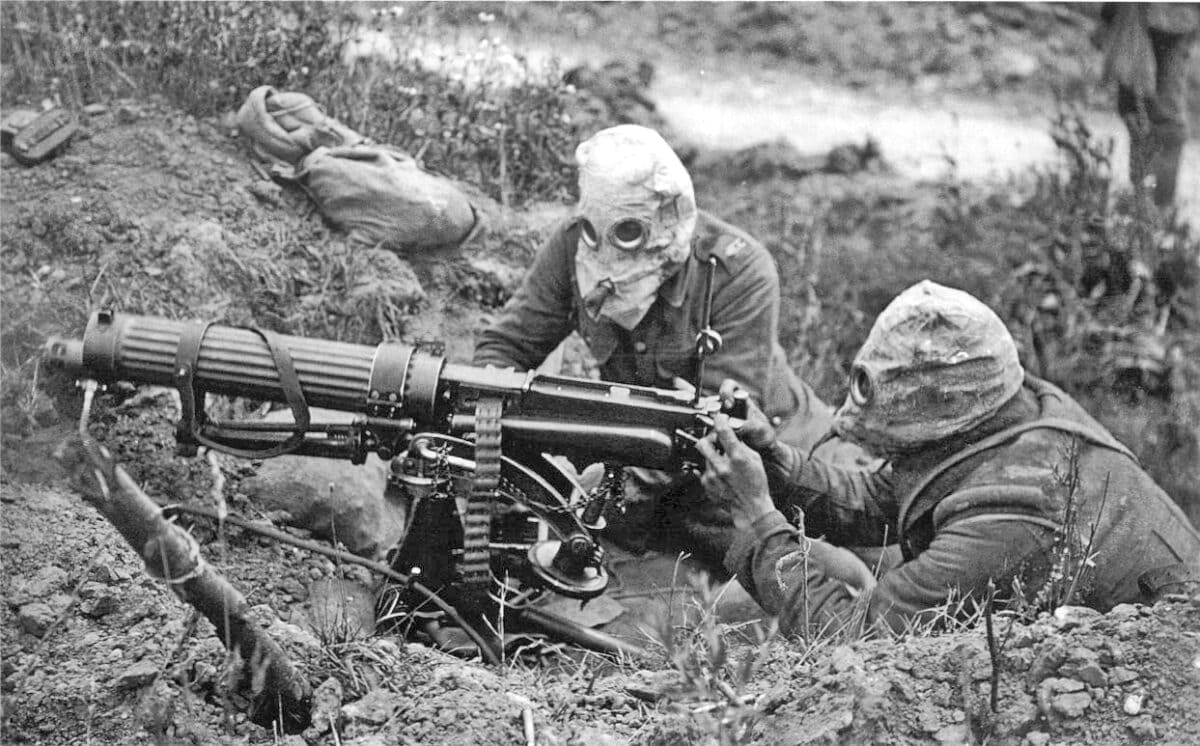 British Vickers gun team in action at the Battle of the Somme. Both are wearing gas masks.

In total, more than 29 million M-2 gas masks were issued, and these were used by the French as well as American, Italian, and Belgian forces. However, the American forces tended to use the M-2 as a “back-up” gas mask while relying on the SBR instead. Later in the war, General Order 78 went so far as to forbid the M-2 from use except for those who had head wounds or could not otherwise wear the SBR.

The M-2 featured a cloth face cover with lenses and needed to be moist to work, but water would do the trick despite a longstanding myth that soldiers had to urinate on the masks to make them work. While it is possible that soldiers urinated on the mask when water wasn’t available it is unlikely this was a common practice.

The M-2 was not the only French gas mask used during the war either. The French actually took a cue from the Germans. By the fall of 1915, the Allies were also using poison gas, and the Germans were quick to adapt with the Lederschutzmaske 1917, which featured a rubberized fabric mask with eyepieces and a separate cylindrical screw-fit filter that could be changed once its filling became ineffective. This mask was actually produced in three sizes and initially carried in a cloth bag.

The French essentially copied this pattern for the ARS 17 mask in 1918 and these remained in service until the end of the war. The ARS 17 was used in the interwar period and was only replaced by the ANP T 31 in 1935. However, the French had produced the ARS 17 right up until the outbreak of the Second World War.

While gas warfare has thankfully only been used a few times since the guns fell silent in November of 1918, the history of the horrible conflict lives on in the gas masks that helped protect the wearer. And although these won’t tell stories, by looking into the glass eyepieces you can certainly better appreciate what it must have been like to have to endure the hell of the trenches whilst wearing the masks.