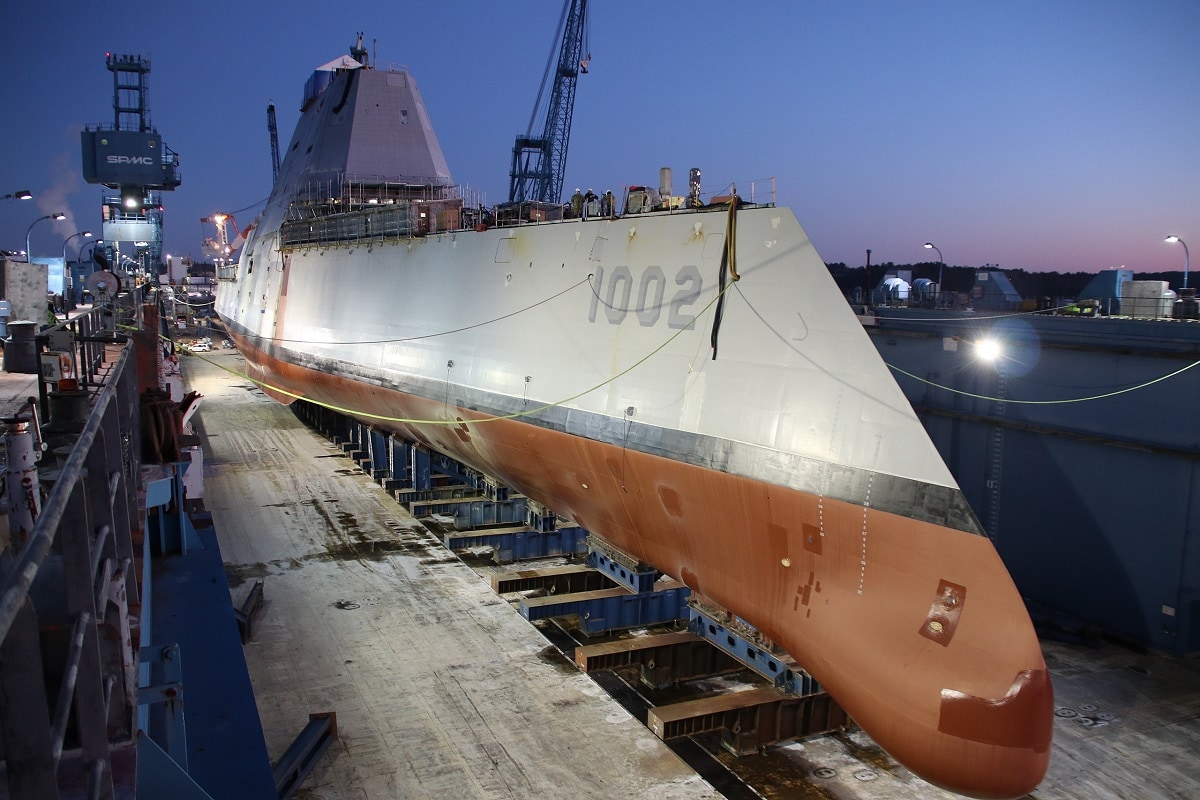 It hasn’t been exactly “smooth sailing” for the U.S. Navy’s Zumwalt-class destroyer program. Of the originally planned 32 warships, 29 were canceled. Last week, the third and final vessel of the class, the future USS Lyndon B. Johnson (DDG-1002), completed her “builder’s trials” in Maine and has since returned to General Dynamics Bath Iron Works (BIW), the company announced.

The five-day trial of the stealth destroyer included demonstrations of operational capabilities of its hull, mechanical and electrical systems.

“This is an important day for Bath Iron Works,” President Dirk Lesko. “The success of this trial moves us closer to delivering this ship and returning our focus to increasing the pace of DDG 51 construction. Achieving this milestone is the result of tireless effort on the part of the BIW-Industry-Navy team who have our gratitude for a job well done.”

The ship will next go to Raytheon Integrated Defense Systems for a combat system integration and activation process before finally receiving commissioning as a Navy warship, DefenseNews reported.

BIW had laid the keel for the 610-foot-long guided missile warship, named for President Lyndon B. Johnson, in 2017. The warship was subsequently christened in 2019, and after she is fully tested, commissioned, DDG-1002 will operate out of San Diego as her home port.

The stealth cruiser will join her two warships, both of which were Bath-builds. Those include the lead ship of the class USS Zumwalt (DDG-1000), the first ship to be named after Adm. Elmo Russell “Bud” Zumwalt Jr., who has the distinction of being the youngest person to serve as Chief of Naval Operations (CNO); and USS Michael Monsoor (DDG-1010), named after Master-at-Arms Second Class Michael A. Monsoor, a U.S. Navy SEAL killed during the Iraq War and posthumously awarded the Medal of Honor.

DDG-1002 is the 34th ship named by the Navy after a U.S. president, and the first warship to be named for President Johnson, whose achievements while president included the Civil Rights Act, the Voting Rights Act, Medicare and Head Start as well as strong support for the U.S. space program and its Apollo missions. Johnson served in the U.S. Navy during the Second World War, and ultimately reached the U.S. Naval Reserve rank of commander. He was awarded the Silver Star for his service in the war.

A Ship Looking For a Mission

At 610 feet long and roughly 81 feet wide, with a displacement of about 15,761 tons, the Zumwalt was designed as a new class of multi-mission stealth warships with a focus on land attacks. It was thought that the sleek vessels could also take on secondary roles including surface and anti-aircraft warfare. The next-generation, multi-mission destroyers are also equipped with a state-of-the-art electric propulsion system, wave-piercing tumblehome hull, stealth design, and the latest warfighting technology and weaponry.

The DDG 1000 class features a hull designed to create a low radar profile, an integrated power system and a total ship computing environment infrastructure. Additionally, the warships’ sleek, wave-piercing tumblehome design was meant to make the destroyer appear much smaller on radar.

Yet, it hasn’t been an easy path from the drawing board to actual deploymentment for the Navy’s cutting edge warship. The Zumwalt-class’s main gun proved too expensive to operate, while the Congressional Research Service has estimated that each Zumwalt will cost more than $4 billion to construct, compared to about $1.6 billion for Arleigh Burke-class destroyers. As a result, the Navy canceled the program – reducing the class to just three vessels. 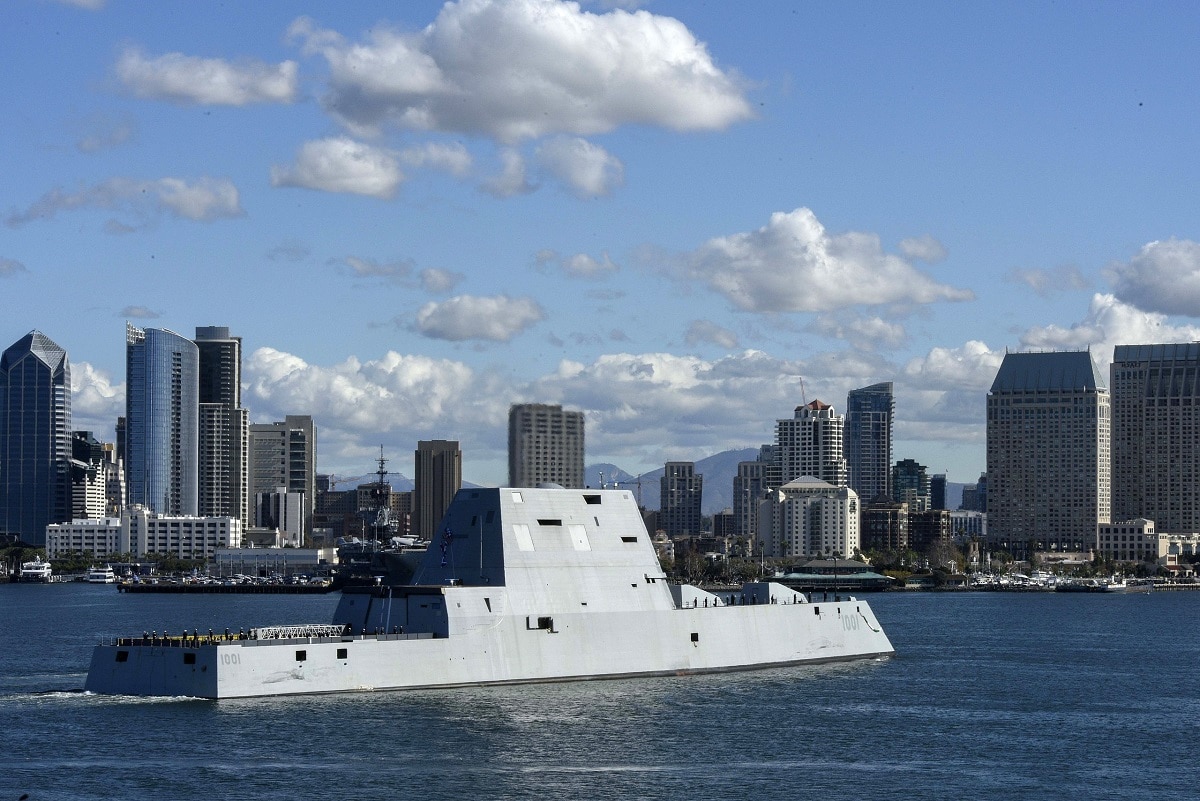 SAN DIEGO (Dec. 7, 2018) The Pre-Commissioning Unit (PCU) Michael Monsoor (DDG 1001) arrives in homeport of San Diego. The future USS Michael Monsoor is the second ship in the Zumwalt-class of guided- missile destroyers and will undergo a combat availability and test period. The ship is scheduled to be commissioned into the U.S. Navy Jan 26, 2019 in Coronado, Cailf. (U.S. Navy photo by Mass Communication Specialist Seaman Apprentice Nicholas Huynh/Released) 181207-N-IW125-1021

After the future USS Lyndon B. Johnson departs Bath permanently, the Arleigh Burke-class will be the only type of vessel constructed at BIW until the Navy designs and awards contracts for the next-generation destroyer. BIW currently has under construction Arleigh Burke-class destroyers Carl M. Levin (DDG 120), John Basilone (DDG 122), Harvey C. Barnum Jr. (DDG 124), Patrick Gallagher (DDG 127), Louis H. Wilson Jr. (SSG 126) and William Charette (DDG 130). There are currently more than 60 Arleigh Burke-class destroyers in service, and BIW has produced 37 of them, including the first one in 1989.