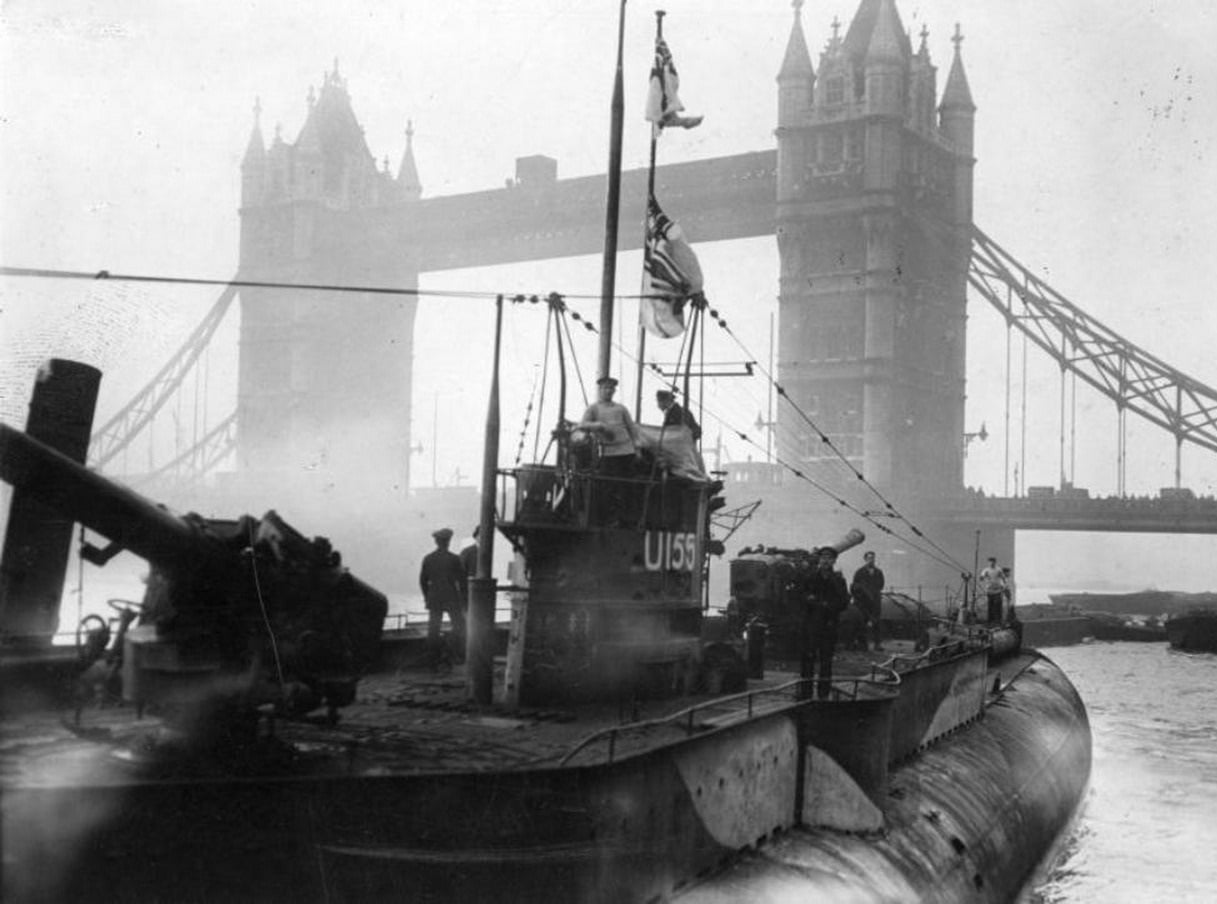 Uboat 155 exhibited in London after World War I.

Submarines showed early in their existence that they could have an outsize impact in major wars.

They were so effective that major naval powers set out to build different kinds of submarines for different missions. The Japanese even attempted to create dedicated submarine aircraft carriers.

Designed in the inter-war period, these massive subs relied just as much on large guns and turrets as they did on torpedoes.

Both types had torpedo tubes — two on the Type 151s, which had storage for 18 torpedoes, and six on the Type 139s, which could store 24 torpedoes — but their primary armament were two massive 5.9-inch deck guns normally fitted on surface warships, which were located in front of and behind the coning tower.

Their massive size and displacement — about 200 feet to 300 feet long and over 2,000 tons submerged — allowed them to sail much farther than smaller submarines and without assistance.

Type 151 and 139 boats operated in the waters off the Azores, Africa, and even the East Coast of the US, sinking dozens of ships. One Type-151 boat, U-156, became the first foreign warship to shell the continental US in 70 years when it fired on a Cape Cod town in July 1918.

They also exploited an interesting loophole in the Washington Naval Treaty in 1922, in which major naval powers of the world agreed to limits on the number, weight, and caliber of most warships.

Submarines, however, were practically unregulated. Cruiser submarines, with large torpedo stores and large guns, were a way to augment the power of any surface fleet without violating the treaty.

All of the major naval powers built cruiser submarines in the inter-war period.

Italy had two types of cruiser submarines: the Ettore Fieramosca and the four Cagni-class boats.

The Germans built some of their Type IX subs for long-range duty similar to that of cruiser submarines.

Several of the US Navy’s nine V-boats, specifically those of the Narwhal subclass, became cruiser submarines, each armed with two 6-inch guns. They saw extensive service during World War II and were perfect for inserting and supporting Marine Raiders on special operations, as well as transporting supplies to guerrillas in the Philippines.

The most well-known cruiser submarine among Western countries was France’s Surcouf. It had two 8-inch guns in a single turret and had two external swiveling torpedo mounts with three tubes each, in addition to the standard internal torpedo load. It also carried a floatplane for reconnaissance and to provide targeting.

Japan embraced cruiser submarines more than any other power. Due to the large size of the Pacific, Japan’s navy prioritized the ability to cover long distances, especially with its submarines.

The Imperial Japanese Navy had multiple classes of cruiser submarines, most notably the Type J1 and Type B1 classes. The four J1 boats had two 5.5-inch guns. The 20 B1 boats only had one gun each but were also each equipped with a floatplane.

The submarines were highly effective, particularly early in the war, when they sank multiple US ships — including the carrier USS Wasp and cruiser USS Juneau — and bombarded the US mainland on two separate missions.

Despite their long ranges and massive firepower, cruiser submarines failed to catch on.

It became obvious that they were being used to skirt the limits of the Washington Naval Treaty, and restrictions on submarines were included in the following London Naval Treaty in 1930

Moreover, the boats had shortcomings.

They were nowhere near as well armored as surface warships, which meant they couldn’t use their deck guns against warships unless the odds were heavily in their favor. Firing and operating the guns also proved difficult in the submarines’ confined spaces, particularly in rough waters.

Despite early successes for the Japanese and good use by the Americans, cruiser submarines had poor wartime records overall, especially as navies fielded more advanced anti-submarine capabilities.

Nearly all of Japan’s cruiser submarines were lost in action, including all but one of the B1 boats, as were three of Italy’s four Cagni-class boats and almost half of the Soviet K-class boats. Surcouf did see service with the Free French Naval Forces, but it disappeared en route to the Pacific in 1942.

Ultimately, the cruiser submarine concept was ditched in favor of smaller subs dedicated to using torpedoes, but the concept of subs with long-range capabilities lived on, leading to the development of cruise- and ballistic-missile subs early in the Cold War.