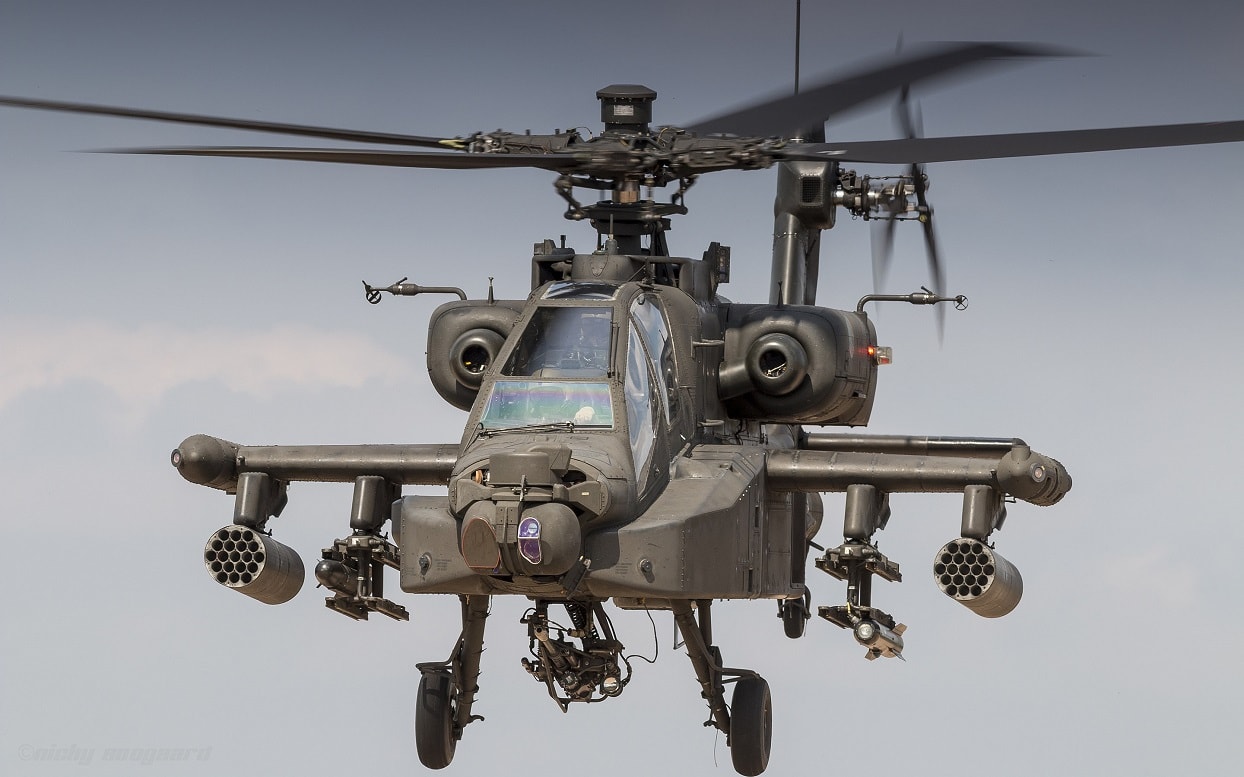 Mines are one of the scariest of weapons. Devices lurking in the ground or in the ocean, waiting to be sprung on an unwary soldier, vehicle or warship.

But mines that can shoot down helicopters?

Russia is using anti-helicopter mines to trap unwary choppers. The threat is serious enough that the U.S. Army is trying to devise countermeasures to stop it.

“Aviation mines reportedly function by using an acoustic-infrared sensor to first identify the noise of an aircraft at up to 3.2 kilometers and then launch a projectile at the identified aircraft when it is within 150 meters,” according to the U.S. Army’s OE Watch magazine, which monitors foreign military developments. “Although currently fielded Russian aviation mines can only hit low flying targets at a very short distance, their employment could greatly complicate Russia’s adversaries’ efforts to protect airfields, drop zones, and any other place where aircraft may fly low.”

The mines can be emplaced by ground troops or even air-dropped from helicopters using “a special ‘aviation’ version of the Bumerang anti-helicopter mine, with six (instead of four in the ‘ground’ version) stabilizing slings, which ensures the accuracy of the installation of anti-helicopter mines in the vertical plane,” according to an April 2021 article in Russian defense magazine Military Industrial Courier (Voyenno-Promyshlennyy Kuryer, or VPK). “These mines take stable vertical positions while still in flight, and the NVU [mine] is activated when coming into contact with the ground surface.”

The mines can be laid quickly, including a three-kilometer (1.9 mile)-long minefield emplaced in one hour by Russian sappers during an exercise in March 2018, VPK said. And they can remain functional for at least three months after placement. “The key factors influencing the duration of combat operation are primarily the temperature of the surrounding air and the number of the mine target guidance system activations,” said VPK. “Nevertheless, the minimum guaranteed time for its power source autonomous operation is 90 days.”

While designed to destroy helicopters, fixed-wing aircraft are also vulnerable, especially during landing. “Even heavy bombers and military transport aircraft reduce their speed to 280-320 kilometers per hour, and flight altitude — down to 100-200 meters, when on landing approach. Moreover, the range of their location from the ‘native’ airfield runway is at least 10 or even 15 kilometers.”

Interestingly, the Russian military views anti-helicopter mines as not just kinetic weapons, but also as psychological weapons. “An important role was also assigned to psychologically impacting the helicopter crew, who realize the danger of being detonated and involuntarily elevate the flight altitude of the aircraft, thus making it more vulnerable to [more traditional] means of air defense,” VPK noted.

The tactical utility of anti-helicopter mines is obvious. Originally designed by Russia in the late 1990s as a means to protect installations and block potential landing zones, they can also be covertly emplaced by commandos to shut down enemy airfields. “Anti-helicopter mines are the ideal means for organizing mine ambushes on presumed routes of the flight of enemy helicopters and light aircraft, capable of significantly supplementing traditional air defense weapons,” VPK said.

The U.S. Army was worried enough that it put out a research solicitation in 2017 to develop countermeasures to aviation mines. “Rotary wing aircraft have technical and operational vulnerabilities that include flight below 1000 feet Above Ground Level (AGL), a unique set of audio signatures as well as the operational requirement to land on short notice on unsecured terrain,” the Army solicitation said. The current status of the project is unclear.

But what’s troubling about anti-helicopter mines is their potential for misuse. Since the 1970s, airliners have been vulnerable to shoulder-fired anti-aircraft missiles launched by terrorists. If terrorists get their hands on these weapons, seeding a major international airport with missile-spewing anti-aircraft mines is a frightening possibility.

Even militarily, the concept could be a problem. While the Russian weapons presumably have some capability to distinguish between enemy and friendly aircraft, mines have a habit of being indiscriminate in who they hurt. Not to mention the complex possibilities of the real world, such as Russian allies who might just happen to be using helicopters or transport aircraft built by NATO nations. As Russia discovered when Malaysian Airlines Flight 17 was destroyed by an anti-aircraft missile – fired mistakenly by pro-Russian separatists in Eastern Ukraine, according to international investigators – the political blowback from accidents are enormous.

Significantly, the Russian mine is described as being “autonomous,” which means they don’t need a human to detonate them. But this also means that machines will make the decision to pull the trigger. Mistakes will inevitably happen.