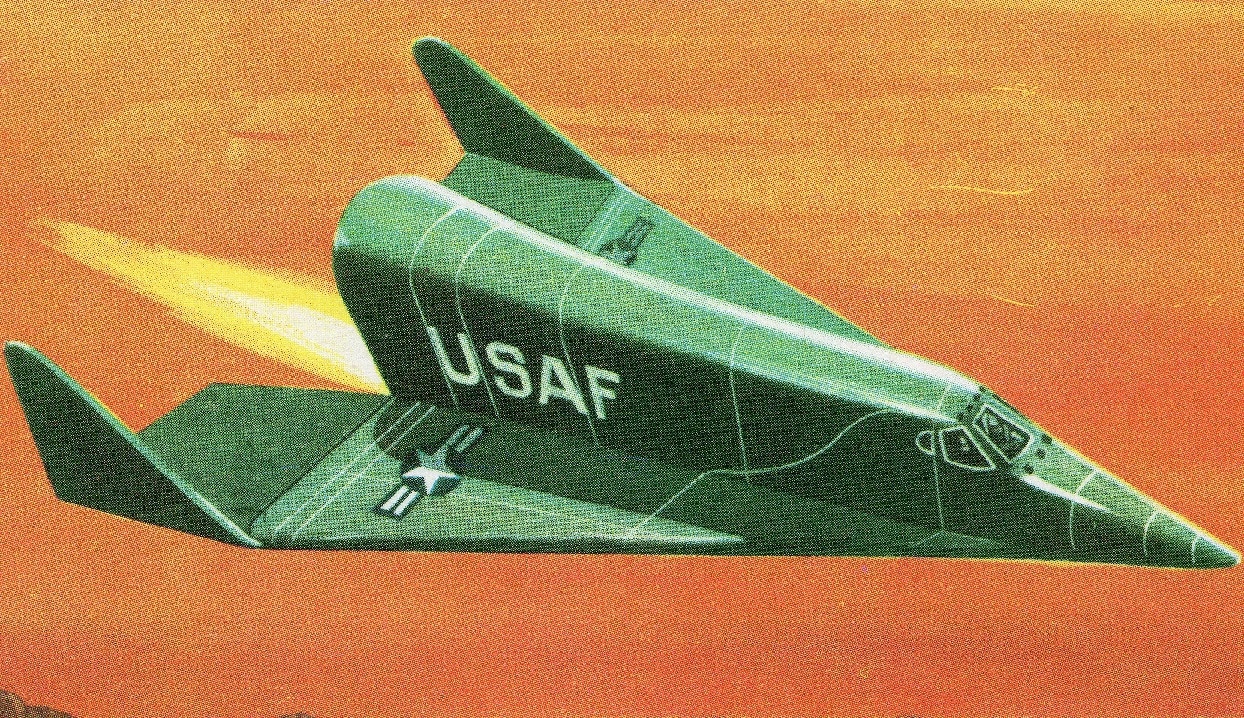 Back last month, American intelligence officials revealed that China had conducted a largely successful test of a new hypersonic weapon that entered earth’s orbit before reentering and impacting miles away from its intended target.

The news prompted a slew of headlines about China shocking the world with an advanced new hypersonic missile; the problem is, neither of those assertions is true. The weapon China tested a few weeks ago was not a missile, nor was it new technology. In fact, the Soviet Union deployed a dozen and a half similar weapons during the Cold War, and the United States very nearly leveraged the same basic premise to field a hypersonic sub-orbital bomber in the 1960s.

China’s recent test was of something we usually call a FOB, or fractional orbital bombardment system, and it might be more prudent to compare it to the U.S. Air Force’s secretive X-37B uncrewed orbital vehicle than a hypersonic missile-like Russia’s air-launched Kinzhal missile.

These weapons enter low earth orbit, but rather than following an arcing trajectory like an ICBM, the FOB can use thrusters to change course and choose when and how it will renter the atmosphere. This is a serious problem for the United States, as the nation’s missile defense apparatus relies on early detection of an ICBM launch and then carefully calculating the weapon’s trajectory in order to intercept it. China’s new FOB follows no set trajectory, deploys a hypersonic glide vehicle that can defeat local missile defense, and can even approach the U.S. from over the South Pole, where Uncle Sam’s defenses are thinnest.

It’s certainly a potent weapon — and that’s exactly why America was hard at work developing similar technology before the Soviets even put Sputnik in orbit… But (and there is a big BUT here) in this era of mutually assured destruction, one could argue that there’s no need for exotic new (or old) nuclear weapon delivery vehicles. The “everybody dies” arithmetic adds up the same if Americans and China launch 200 nuclear ICBMs or 200 nuclear FOBs at each other: neither nation’s defenses are formidable enough to intercept that volume of missiles (or really, anything close to it).

Practical in today’s geopolitical climate or not, the concept is not only sound, it’s just as formidable today as it was in the 1950s.

Born out of Germany’s World War II efforts to create a bomber that could attack New York and continue on to the Pacific, Boeing’s X-20 Dyna-Soar was to be a single-seat craft boosted into the sky atop American rockets.

It would soar in the sky in the blurred line between earth’s atmosphere and the vacuum of space, bouncing along the heavens before releasing its payload over Soviet targets miles below. The X-20 was a 1950s science fiction fever dream born of the nuclear age and the earliest days of the Cold War… And according to some experts, it very likely would have worked.

As World War II came to a close, the United States and Soviet Union’s relationship with one another was already beginning to sour. Nazi Germany’s war machine had torn through the continent, often on the backs of Germany’s state-of-the-art military technology, but geopolitics is a game of theater and pragmatism in equal measure. While the world ached for justice, defense officials in both America and the Soviet Union already saw the Cold War looming large on the horizon. Justice mattered in the minds of these leaders, but not quite as much as surviving the next great conflict to come.

Nazi technology had given Germany an advantage on multiple military fronts, and both America and the Soviet Union knew the scientists responsible for these technological leaps would soon be looking for a means to escape prosecution for their roles in the conflict. Both nations, recognizing the strategic advantage their knowledge could offer, quickly set about capturing as many Nazi scientists and researchers as they could. In the United States, this effort to leverage Germany’s scientists came to be known as Operation Paperclip.

In all, Operation Paperclip, which was organized by the Joint Intelligence Objectives Agency (JIOA) and largely executed by the U.S. Army’s Counter Intelligence Corps, brought some 1,600 German scientists, engineers, and technicians to the United States following the war, where they were given roles in America’s ongoing military and technological efforts. NASA’s famed Wernher von Braun, the man who developed the Saturn V rocket that brought America to the moon, was perhaps the most high profile German scientist to come through Paperclip, but among the others were Walter Dornberger and Krafft Ehricke.

From Nazi officers to Bell engineers

In their newfound roles at Bell Aircraft, an American aircraft manufacturing firm, Dornberger and Ehricke first proposed the concept of a sort of vertical-launched bomber and missile in one. In Germany, they had called this theoretical platform the Silbervogel, or Silver Fish. Today, the plan seems quite logical: The vehicle would be sent aloft atop a rocket booster and propelled all the way into a sub-orbital but exoatmospheric altitude where it would briefly enter space, before gliding down toward the atmosphere and being “bounced” back up thanks to the vehicle’s wings.

Today, the idea of launching a reusable spaceplane into a suborbital altitude practically sounds run of the mill, thanks to similar concepts being leveraged by everything from nuclear ICBMs to the most advanced, cutting-edge hypersonic weapons, but Dornberger and Ehricke’s proposal was submitted in 1952 — five years before the Soviet Union would launch the world’s first man-made satellite into orbit. Operation Paperclip was devised specifically to leverage Germany’s scientists to help kick-start America’s own exotic military programs, and in hindsight, it’s hard to argue that the effort wasn’t a success, regardless of the ethical implications.

On October 1, 1957, the Soviet Union launched Sputnik 1, the world’s first man-made satellite. It was a small, metal sphere, measuring only about 23 inches in diameter, with four external radio antennas trailing behind it broadcasting signal pulses back to Soviet scientists, as well as the rest of the world. What followed has come to be known as the “Sputnik Crisis” in the Western world.

America had been the de facto world leader in terms of both military and economic might following the end of the Second World War, but the success of Sputnik placed America’s supremacy into question. The Soviets had matched America’s nuclear weapons with a test of their own in 1949, and again with the hydrogen bomb in 1953. Now, instead of matching America’s success, the Soviets were starting to take an intimidating lead.

The new Dyna-Soar effort was to mature in three stages. Dyna-Soar 1 would be a research vehicle. Dyan-Soar 2 would add reconnaissance, and Dyna-Soar 3 would incorporate bombing capabilities. America intended to work fast, planning to test the first iteration by 1963 in glide trials, with powered trials to follow the next year. By then, the Dyna-Soar 2 was expected to exceed Mach 18 in powered flight. A missile based on the Dyna-Soar program was expected to enter service by 1968, with the spaceplane itself operational by 1974.

In order to meet these deadlines, proposals were fielded by both Bell Aircraft and Boeing. Despite Bell’s head start, Boeing ultimately secured the contract and set about work on developing what was to be the X-20 Dyna-Soar.

By 1960, the spaceplanes overall design was largely settled, leveraging a delta-shape and small winglets for control in place of a traditional tail. In order to manage the incredible heat of reentry, the X-20 would use super alloys like the heat-resistant René 41 in its frame, and molybdenum, graphite, and zirconia rods all used for heat shielding on the underside of the craft.

“The leading edges of the wing would be made of an even more exotic alloy. There was provision for active cooling.”

That same year, astronauts were chosen to fly America’s new space bomber. Among them was a thirty-year-old Navy test pilot and aeronautical engineer named Neil Armstrong, who would go on to leave the program in 1962.

Entirely feasible with the technology of the day

By the end of that same year, the program was given the designation X-20 and it was unveiled to the public in a ceremony held in Las Vegas. America’s mighty B-52 Stratofortress was chosen to air-drop the X-20 for in-atmosphere flight tests, and the first firing of the rocket booster intended for higher altitude drop-tests was also a success.

The project was incredibly ahead of its time, while somehow also being entirely feasible with the technology of the day. In the early 1960s, it seemed all but assured that America would soon be flying space bombers.

Once built, the X-20 Dyna-Soar’s first mock-up measured 35 and a half feet long with a 20.4-foot wingspan. It used three retractable struts for landing. Although it would have its own A-4 or A-9 rocket engine to help it reach an exoatmospheric trajectory, it would effectively glide throughout most of its mission, dipping down into the atmosphere just far enough to create lift, which it would use to bounce back up, skipping across the air enveloping the earth like a stone over a pond. It would continue to skip until it had lost enough velocity to prevent another bounce back up, at which point the pilot would glide the craft back down to earth just like the Space Shuttle.

Although the X-20 concept was quite literally out of this world, it was still technically feasible, and early tests suggested that the Dyna-Soar may indeed work as advertised. However, the program was also incredibly expensive, and with the new National Aeronautics and Space Administration moving forward with its Gemini program, America’s civilian leaders were becoming more interested in fielding an actual spacecraft they could use to compete with the Soviets, rather than a weapon that offered little in the way of international prestige.

“If we had pursued it as a black-world program like the U-2, it might have gone ahead,” explained Hallion. “I never saw any technical issue that would have been a show stopper.”

On December 10, 1963, the X-20 program was canceled. The United States had invested $410 million in its development, or more than $3.5 billion in 2021 dollars, but the Dyna-Soar was still a long way off from being the space bomber it was intended to become. Even per Hallion’s positive recollection of the effort, the X-20 was still at least two-and-a-half years away from working and would have required at least another $370 million to complete. A space bomber would indeed offer global range, but in 1957, the U.S. Air Force had demonstrated that the B-52, the same bomber tasked with helping test the X-20, could circle the globe all on its own, without any need for pricey rockets.

Upon canceling the X-20 program, the U.S. government diverted its remaining funding to the Manned Orbiting Laboratory effort that used Gemini spacecraft to demonstrate the value of a crewed military presence in Earth’s orbit.

But the X-20 was not completely swallowed up by history. Elements of the program could be found in NASA’s Space Shuttle, and of course, the Space Force’s secretive X-37B bears more than a passing resemblance to the X-20. The X-37B is not touted as a space bomber and almost certainly isn’t, but the reusable spaceplane may, in fact, be one of America’s most capable reconnaissance assets.