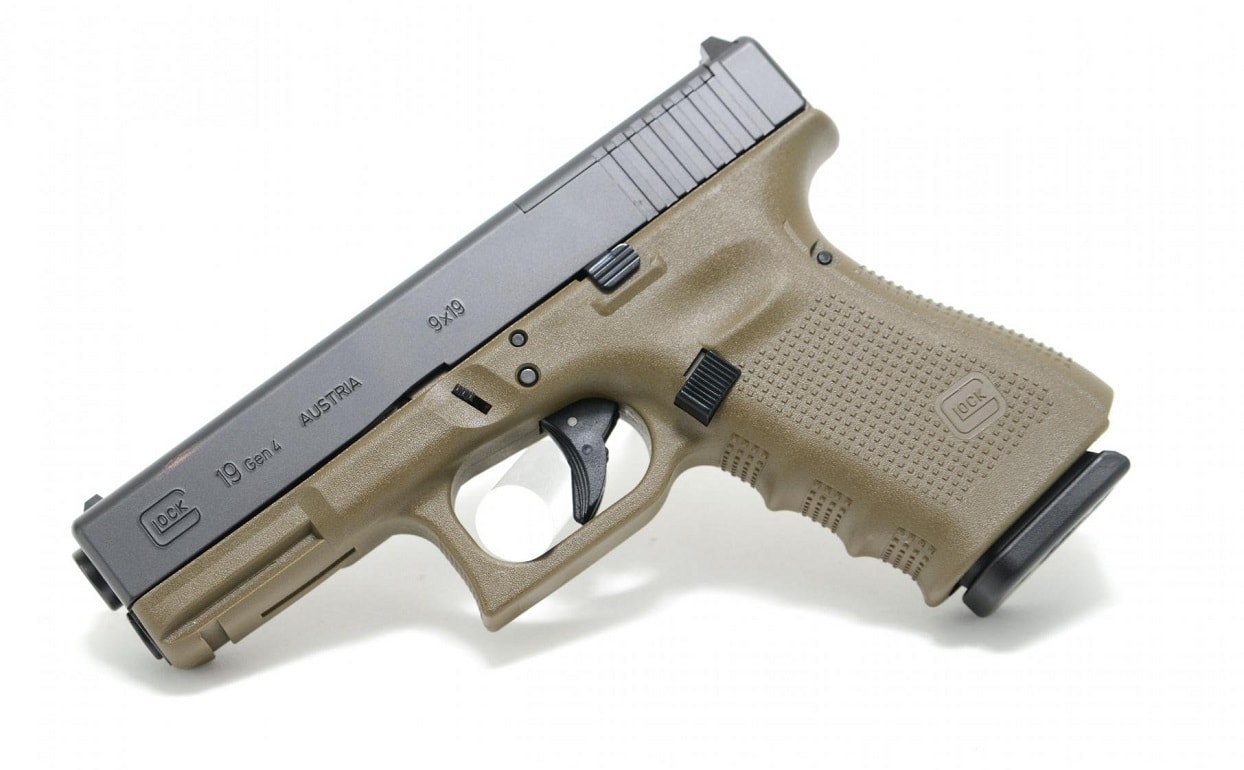 Glock 19 Gen 4,  A Short Review – Ever since the Glock 19 debuted in 1988, the famous “plastic gun” has been a hit with both private owners and law enforcement. Released in 2009, the fourth generation of the Glock 19 has continued in Glock’s tradition of unrivaled reliability and practicality. Let’s break down the specifics.

The Glock 19 Gen4 is designed for function first. This design philosophy means that the gun parts fit together more loosely than most, making it not as accurate as competition-level pistols. Nevertheless, the Gen4 is sufficiently accurate for self-defense and range shooting. I found some small variations at longer ranges (25–100 yards), but found I could shoot 4 inch groups at 25 yards. That accuracy is perfectly sufficient for self-defense. If you want more accuracy, you can look into purchasing an aftermarket barrel or mounting a micro red dot like the T1. I’d also recommend replacing the plastic sights with AmeriGlo GL-433 Hackathorn Sight Set. It’s more durable, easier to pick up and and quicker to sight.

Glock is renowned for reliable weapons that function in almost any circumstance, and the Gen 4 is no different. A new dual-recoil spring assembly increases the system’s life by reducing the wear and tear suffered by a gun using just a single spring. The reinforced polymer frame, steel barrel and slide make the Gen 4 a hardy, durable weapon. I had no malfunctions after firing thousands of rounds through the Gen 4 (from a variety of ammo manufacturers). There’s word from other shooters with numbers as high as fifty-eight thousand rounds fired without any malfunctions. You’re not going to beat that kind of reliability.

The Gen 4 is a safe weapon with a unique feel. Like all Glocks, the Gen 4 doesn’t come with a safety switch like many other weapons. Instead, a small lever on the trigger itself must be depressed in order to fire the weapon. This makes it almost impossible for an accidental trigger pull to occur. It also comes with internal safety measures as well, making it a uniquely safe gun.

Glocks are known to be thick, somewhat blocky weapons. The Gen 4 has improved its ergonomics (compared to earlier generations), but if you don’t like how a Glock handles, you probably aren’t going to be won over by this one. Many who don’t like Glocks complained that earlier versions of the Glock 19 were too thick; the Gen 4 addresses this problem by offering different sized back straps to allow customization of the thickness of the grip. The grip comes with finger grooves—these fit my hand well, but some of my friends complained that their hands sat on top of the grips rather than between them. The trigger guard itself is thick and square. The trigger guard would smash my middle finger when firing. This issue is common enough that a light bruise on the middle finger has been called “Glock finger.” Some recommend using a Dremmel tool to shave it down to a more comfortable size. Other improvements include the option to switch the magazine release for left-handed shooters and updated stippling (which made a huge difference in rainy weather to grip).

The Glock’s trigger is average. The pull is listed at 5.5 pounds. The pull is somewhat mushy. If the trigger pull is too heavy, switch the trigger connector to take some of the extra weight off the pull, making it easier for you to pull the trigger without yanking the gun (resulting in a less accurate shot). However, only professional shooters or very dedicated hobbyists will have a bone to pick with the trigger. The trigger functions well and is perfectly functional for self-defense and hobby shooting.

If ordered from the manufacturer, Glock will send three fifteen-round magazines with your Gen 4 (unless you live in a state where the law requires a maximum of ten rounds per magazine). You will also receive a speedloader. The magazine is ultra-reliable; I had no issues with rounds feeding into the chamber. Some found some difficulty with loading all fifteen rounds into the magazine at once, but I found that if I loaded the magazine and let it sit for two weeks, the spring at the bottom of the magazine softened sufficiently for me to load the magazine fully without any problems. The gun can also take the seventeen round Glock 17 magazine, as well as a variety of aftermarket magazines of differing sizes. I did have some issues with aftermarket magazine reliability, so I would stick with the manufacturer’s magazines for the Gen 4. Fifteen rounds should be perfectly sufficient for a self-defense situation. If not enough for your needs, you can always carry the two additional magazines that come with the gun.

One of the most impressive features of the Gen 4 is its size. Measuring in at 7.28 inches long, 4.99 inches high, 1.18 inches wide, and under 21 ounces, the Gen 4 is a rare pistol that straddles the line between compact and full-sized. This means that you get the benefits of full-sized (less snappy when shooting, larger magazine capacity), and compact (light, easy to conceal-carry). This balance makes it a perfect all-purpose size weapon that can be used for self-defense, competition, or hobby shooting. Speaking of competition, the DDM4V11 is a great 3-gun competition rifle that you might be interested in.

The Gen 4 was easy to control when shooting, and didn’t have an aggressive recoil when compared even to other full-size pistols. The dual recoil springs and Glock’s unique signature block palm swell (which directs the recoil energy straight back, rather than up or to the side) both contribute to making this an easy weapon to control when firing.

The Glock Gen4 has an MSRP of $629.99, but can often be purchased for $550 or less. However, note that since the pandemic prices can vary widely, so do your homework to make sure you are getting the best deal possible. That makes this quality weapon fit right in the middle of pistol price ranges—not cutting features to save on cost, but not breaking the bank either. With its extreme durability, you’ll get your money’s worth.

In short: If you’re looking for a solid self-defense firearm, or just to have a good, reliable handgun to shoot on the weekends, go for the Glock 19 Gen4. You won’t be disappointed.