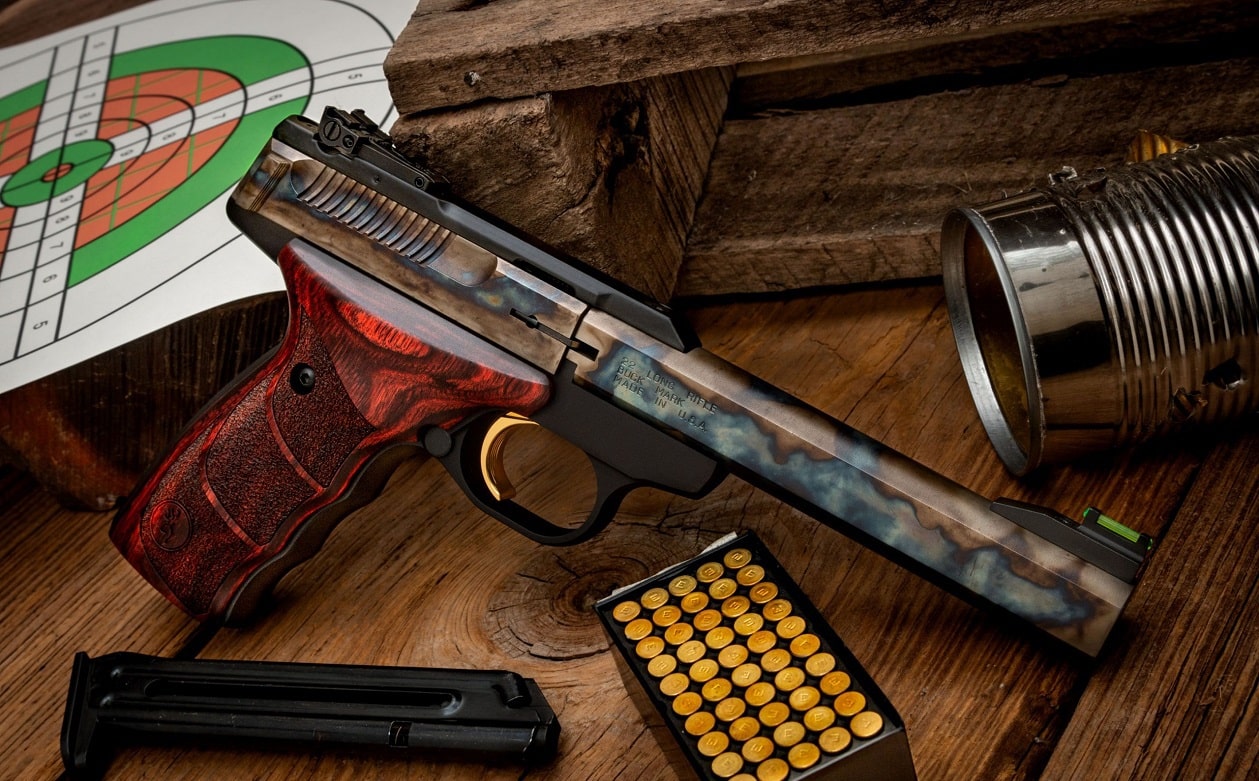 A 2 Minute Review: Browning Buck Mark UDX: The Best .22LR Target Shooting Gun? The Browning Buck Mark UDX is a .22LR pistol that’s going to punch you in the wallet, but treat you really, really right. It’s consistently been a favorite of anyone that likes .22s or anybody that gets their hands on it and I’m no exception. The Buck Mark UDX quickly shot to my current favorite .22 pistol in a matter of days.

Off the bat, this pistol looks sweet. To break with my usual buying habits, I opted out of the “tacticool” looking variations and picked up something classy with wood grips. They look fantastic with the aesthetic of the gun and provide comfort even during long shooting sessions. As you pick it up, you can just feel that it’s cut of a different cloth. The slide is smartly designed with aggressive rear serrations and cocking finds that combine function and fashion. On top of that, you get bright and clear fiber sights that are perfect for target shooting.

The UDX and Buck Mark series pistols are definitely designed with accuracy in mind. It was clear as day when I was driving tacks at twenty yards. Keep in mind that I’m an expertly average shot, so this pistol had me feeling pretty good. Although if you want the stats, I was getting pretty consistent one-inch groups within twenty yards. Out past that got a little sketchy with groups opening up to three inches or so, but that was mostly my doing. Either way, you’ll find the accuracy not lacking in any aspect. The sights make it easy to hit your targets consistently and precisely. This accuracy makes it stand the rest and guarantees it won’t be sitting in a safe untouched for months.

Reliability was a bit rough. Don’t call me a liar just yet. Specifically, my break-in period was not great. Bulk ammo gave it a good bit of issues while higher quality and hotter loads ran better, but not perfect. The break-in period was pretty brief though and its reliability was improved dramatically. After around three hundred rounds or so, everything clicked and the UDX ran absolutely everything through it without any issue. That’s a trait not too often found in .22s since rimfire cartridges aren’t the most reliable thing out there.

I might not have a ton of practical use for .22s, but man, the Browning Buck Mark UDX makes me want to find something. Sure, it’s 500+ bucks but you can be certain that it’ll be money well spent. It excels in terms of accuracy which means it’s great for precision shooting whether that’s paper, steel, or whatever pests might be plaguing your gardens. The break-in period might briefly worry you, but with some TLC, it’ll run like a champ.