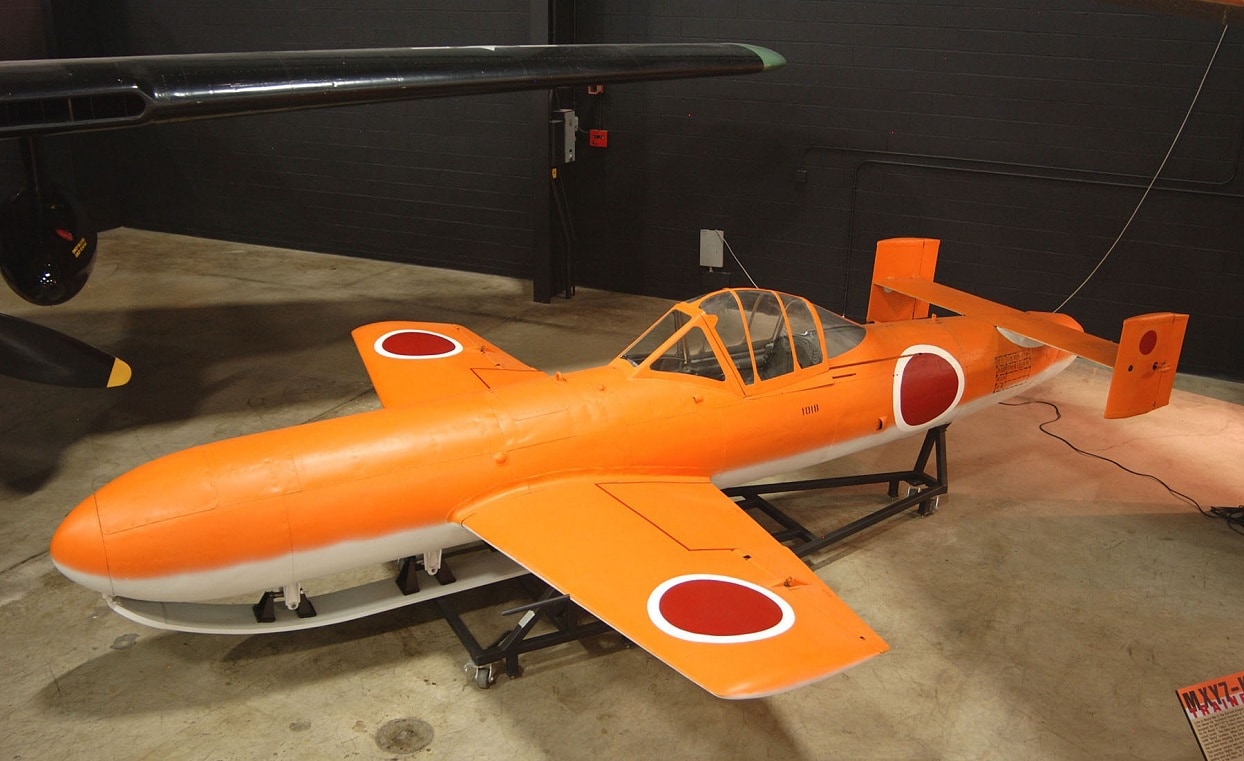 Ohka, a 2 Minute History: The Battle of Leyte Gulf on October 25, 1944, marked the first official deployment of the Imperial Japanese Navy’s “shinpū tokubetsu kōgeki tai” (“divine wind special attack units”), which conducted “kamikaze” attacks against U.S. Navy warships. Seen as a desperate act, it was meant to save the Japanese nation from complete and utter destruction.

The first attacks relied on the standard Japanese aircraft, but Imperial Navy Ensign Mitsuo Ohta designed a specialty aircraft that combined elements of a glider with a rocket plane – one that could be piloted with minimal training. The result was the Yokosuka MXY-7 “Ohka” or “cherry blossom,” an extremely fast, but short range human-piloted flying bomb that could be deployed from a larger bomber, typically the G4M “Betty.”

The Ohka was simple – even crude in design. It featured an aluminum fuselage and wooden wings, yet could carry up to 3,000 pounds of high explosives in its nose. As it was intended to be a “one-way mission,” the Ohka had no landing gear, but as it could reach speeds in excess of 500 miles per hour, it was believed at the time that no Allied fighter could catch and shoot down the Okha.

The first 16 Ohkas made their combat debut on an attack on the U.S. fleet in March of 1945. Nearly every one of the kamikaze aircraft were shot down however, as they were launched at an extreme distance from their targets. Yet, just a month later, on April 12, 1945, a rocket-powered Ohka successfully hit the U.S. Navy Allen M. Sumner-class destroyer USS Mannert L. Abele (DD-733). The downward force of the blast resulted in the immediate loss of power, and caused the ship to break in two. The destroyer was the first U.S. warship to be seriously damaged or sunk by the suicide flying bomb. Of the 336 sailors on board, 84 were killed in the blast.

Seen as a “terror weapon,” the Ohka was dubbed the “Baka bomb” by Allied personnel – using the Japanese word for “foolish” or “idiotic.”

By the end of the war, some 800 of the aircraft had been produced, but most were destroyed on the ground or in-flight when their G4M “Betty” was shot down. Less than 60 of the suicide weapons were actually used in combat, and in addition to DD-733, the battleship USS West Virginia (BB-48) was believed to have been damaged by such a bomb – possibly even before the sinking of the destroyer.

Other warships that were hit by the weapon included the USS Gayety (AM-239), USS Hugy W. Hadley (DD-744), and USS Shea (DD-750). Damage from those attacks, which took place on May 4, 1945 was significant, and D-744 suffered such extensive damage and flooding that the vessel was judged to be beyond repair. Yet, as with the greater kamikaze efforts, the Yokosuka MXY-7 “Ohka” proved to be far from a miracle weapon and was likely a waste of resources and personnel.

Today just over a dozen of the terror/suicide weapons remain – and those are on display at various museums around the world.