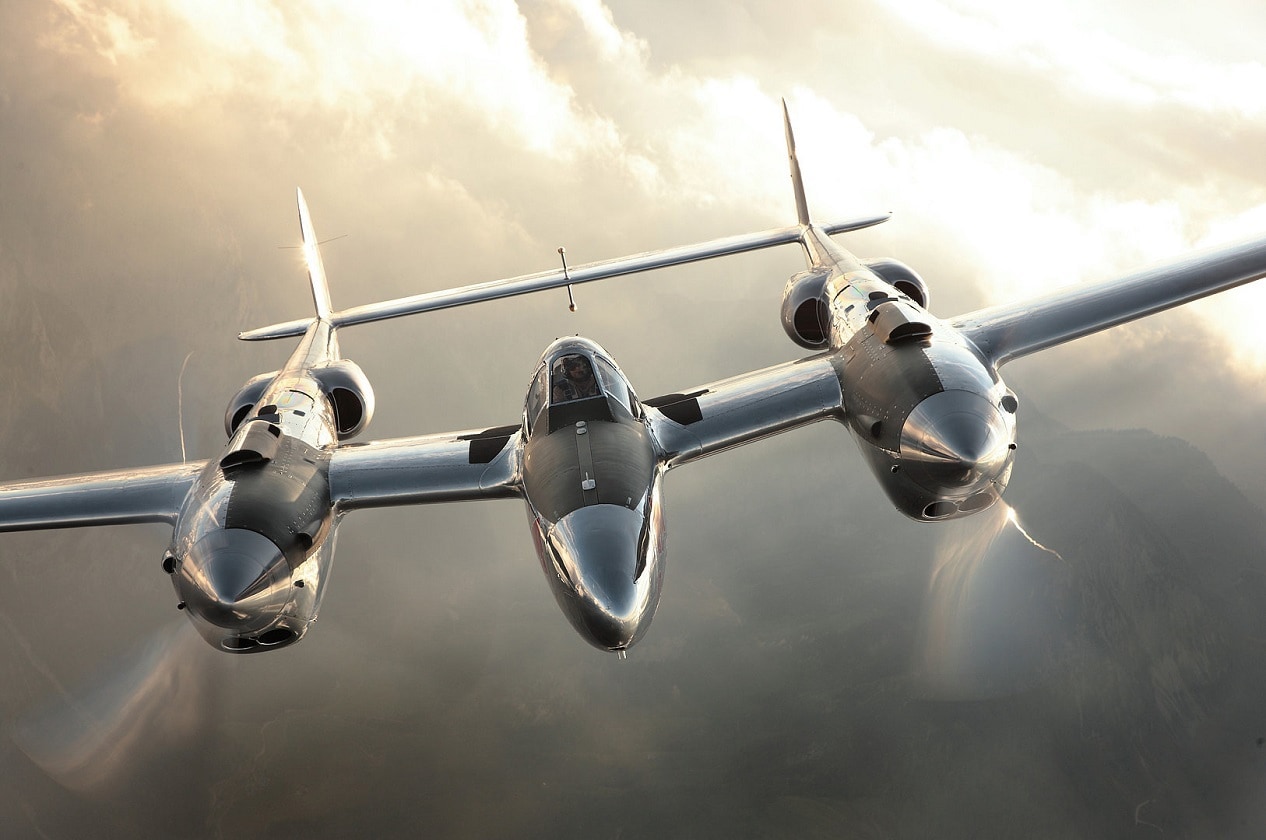 P-38 Lightning, the Best Plane of the Second World War? – In 1937, the U.S. Army Air Corps called for proposals for an interceptor capable of flying 360 miles-per-hour and climbing rapidly to high altitudes. Kelly Johnson, designer at Lockheed—then a small company without major prior military contracts—calculated only a twin-engine fighter could meet such parameters.

Johnson’s winning submission stood apart from the crowd: instead of a traditional fuselage, the twin Allison V-1710 liquid-cooled engines on his YP-38 connected at the tail via long booms. The pilot sat in a slender central pod from which bristled four .50-caliber machine guns and a 20-millimeter Hispano cannon. (A bulkier 37-millimeter Oldsmobile cannon on early models was quickly ditched.) Turbochargers mounted atop the engines enabled rapid climb rates, increased its service ceiling, and even muffled the engines, with contra-rotating propellers to reduce torque.

The P-38 could indeed fly fast—maxing at 395 miles-per-hour—and far (at slower speeds), up to 1,100 miles. However, the fighter’s unconventional configuration had its downsides, notably an infamous tendency for the controls to lock up in steep, high-speed dives, with often fatal results. The engines were finicky and required high levels of pilot training that were frequently lacking. The cockpit was poorly temperature-regulated—freezing at high altitude, excessively hot in tropical climates.

These flaws led the British Royal Air Force to cancel its Lightning order—only for it to be subsequently picked up by America after the Pearl Harbor attack. Uniquely amongst U.S. fighters, it remained in production throughout the entire war, with 10,000 built.

Each P-38 cost around $120-100,000, twice the price of most U.S. single-engine fighters. However, the P-38’s long-range and heavy payload—up to 3,000 pounds of bombs and rockets—meant it could perform missions early-war single-engine types simply couldn’t.

However, while the P-38 was nimble at low altitude, it grew sluggish higher up and suffered heavy losses dogfighting more agile Me-109G and Fw-190 fighters while escorting heavy B-17 bombers over Europe. The 7th Air Force more extensively used Lightnings in the Mediterranean, but even there took a beating in raids over Romania and Bulgaria. A few P-38s were even captured and used by Italian and German pilots to bushwhack Allied bombers.

By 1944, Johnson had identified and resolved the flaws in the Lightning’s airframe—adding power-assisted ailerons and dive flaps that respectively improved its roll-rate and corrected its tendency to lock into steep dives. Late-war bare-metal P-38J and L models incorporated these fixes, along with extra fuel tanks, heated flight suits, and uprated 1,475-horsepower engines (distinguishable by their “chin” radiators)—boosting maximum speed to 420 miles per hour.

The Lightning increasingly excelled as a fighter-bomber armed with 2,000-pound bombs and quintuple-racks of 5” high-velocity rockets. During the D-Day landing, P-38s with black-and-white invasion stripes roamed over northwestern France, blasting Wehrmacht headquarters, radar stations, trains and vehicle columns. One Lightning even skipped a bomb through the command post of Field Marshall von Kluge.

However, the Lightning’s shortcomings vis-a-vis German fighters meant it never equaled the reputation of single-engine Mustang and Thunderbolt fighters. This is unfortunate, as the Lightning was the top-performing Army fighter in the Pacific War, its engines more reliable in tropical climates and its accurate guns more devastating against lightly-armored Japanese warbirds.

In fact, the top-two scoring U.S. fighter pilots ever, Richard Bong with forty kills and Thomas McGuire with 38, both flew Lightnings. Neither survived the war: McGuire smashed his Lightning into the ground dogfighting in the Philippines. Bong died taking off in an F-80 jet.

Charles Lindbergh also flew a Lightning in combat nearly seventeen years after his pioneering trans-Atlantic flight, as did French writer Antoine de Saint-Exupéry (The Little Prince), whose F-5B crashed into the Mediterranean in 1944. Col. Robin Olds, who combat career spanned the Korean and Vietnam Wars with 16 kills, began his tally with a Lightning.

Perhaps the P-38’s most legendary mission occurred on April 18, 1943, after U.S. signals intelligence discovered that Admiral Isoroku Yamamoto, Japanese navy chief and architect of the Pearl Harbor raid, was flying to inspect troops on Bougainville. Sixteen P-38Gs departed from Guadalcanal and flew a 1,000-mile roundtrip to intercept Yamamoto’s G4M Betty transport and send it crashing to the island below. Yamamoto’s body was found still clenching his officer’s katana in one hand.

Special Lightning variants included 700 F-4 and F-5 photo-reconnaissance models, and “Pathfinder” Lightnings with glass noses from which a navigator lying on his belly could peer below to guide strikes onto a target. In 1945, seventy-five black, two-seat P-38M night fighters were converted with a chin-mounted AN/APS-6 radar (effective range: around 5 miles) to hunt Japanese night bombers.

Though swiftly retired after World War II, the Lightning continued service with French and Italian Air Force and saw combat with Chinese Nationalists (one became the first victim of the Soviet-built MiG-15 jet) and over Guatemala, sinking a ship during a CIA-backed coup.

Despite its flaws, the P-38 was a rare early example of a successful “heavy” fighter boasting speed, range and firepower—similar to modern multi-role fighters like the F-15 and Su-27. Kelly Johnson’s design has also proved as timelessly rugged as it is stylish—in 1992, a P-38 crash-landed in Greenland fifty years earlier was excavated from under 82 meters of ice and restored to flyable condition in 2007—under the name Glacier Girl, of course.