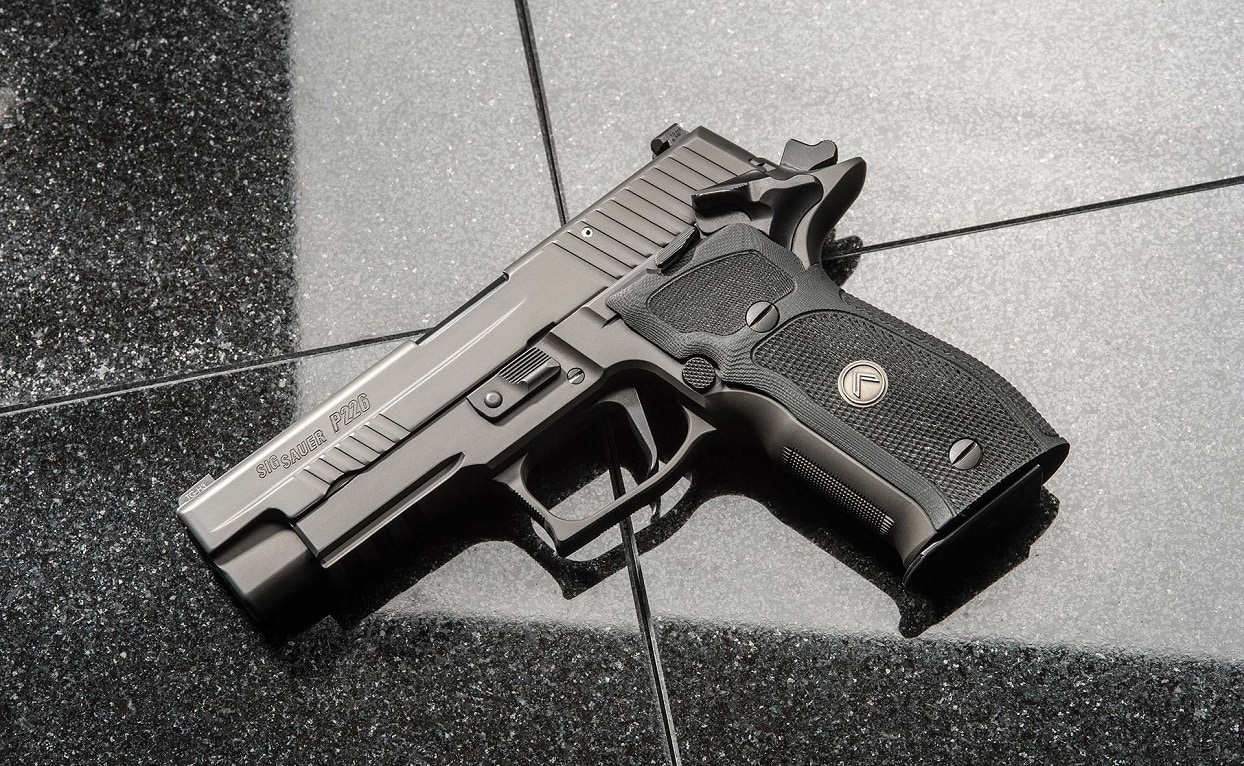 Sig Sauer Legion P226: A 2 Minute Review – I’ll start this by saying that I absolutely love my Sig Sauer Legion P226 handgun. Out of all my pistols, this one might very well be my favorite from the design and accuracy, but let’s get started on the why.

The Legion P226 is a full-size pistol, which means it’s a little heavier than some at 2 pounds unloaded, but that extra heft felt more sturdy in my hands. One of the best things about this pistol, though, is the focus on accuracy.

Everything about the pistol, from the G-10 checkered grips to the beavertail rest at the top of the grip, is meant to help you be more accurate. It works like a charm, too, because I consistently had a spread of less than 3” inside of 25 yards.

It helps that the barrel’s a good length and the weight is so evenly distributed that I barely felt any recoil when I fired. Of course, that’s also thanks to the P-SAIT trigger mechanism. The combination of double-action and single-action shot smoothly.

The cool thing about that is the difference in trigger tensions. There were about 10 pounds on the double-action, but the single had less than half that so there’s a firing option for anyone to be accurate with the weapon.

I will say that I put about 100 rounds down at the range and normally I’d feel some tension in my fingers, but Sig Sauer crafted their Legion weaponry with an X-Five undercut in front of the trigger.

That was perfect when I was shooting, because it gave me somewhere to steady my aim. When I wasn’t shooting or if I needed to teach someone gun safety, that undercut was a great guide and it was very comfortable.

I went to the range in the daytime and had no issue seeing the fiber optic front sights thanks to the tritium. Just to check, I dry fired a few times in the dark at home and the night sights worked perfectly. Because of the low recoil, they lined up great for a follow-up, too.

One thing that always drives me crazy is when my pistol gets caught on the side of my holster or my shirt, but I had no problems with this pistol. Everything’s pretty much flush with the slide and grip, so there’s not much to catch on.

The Legion P226 comes with 3 magazines, which is a pretty good deal, and membership to a Legion owners-exclusive online club. Sig Sauer also sent me a gun case with a collectible challenge coin that I thought was a neat little extra.

I got mine for $1,300, which is a little expensive for a pistol. I saw it higher in some places and I’ve since seen it as low as $1,100, but the Sig Sauer Legion P226 fires like a dream. It’s fast, accurate, and has no problem putting down 100 rounds as long as you take care of it.