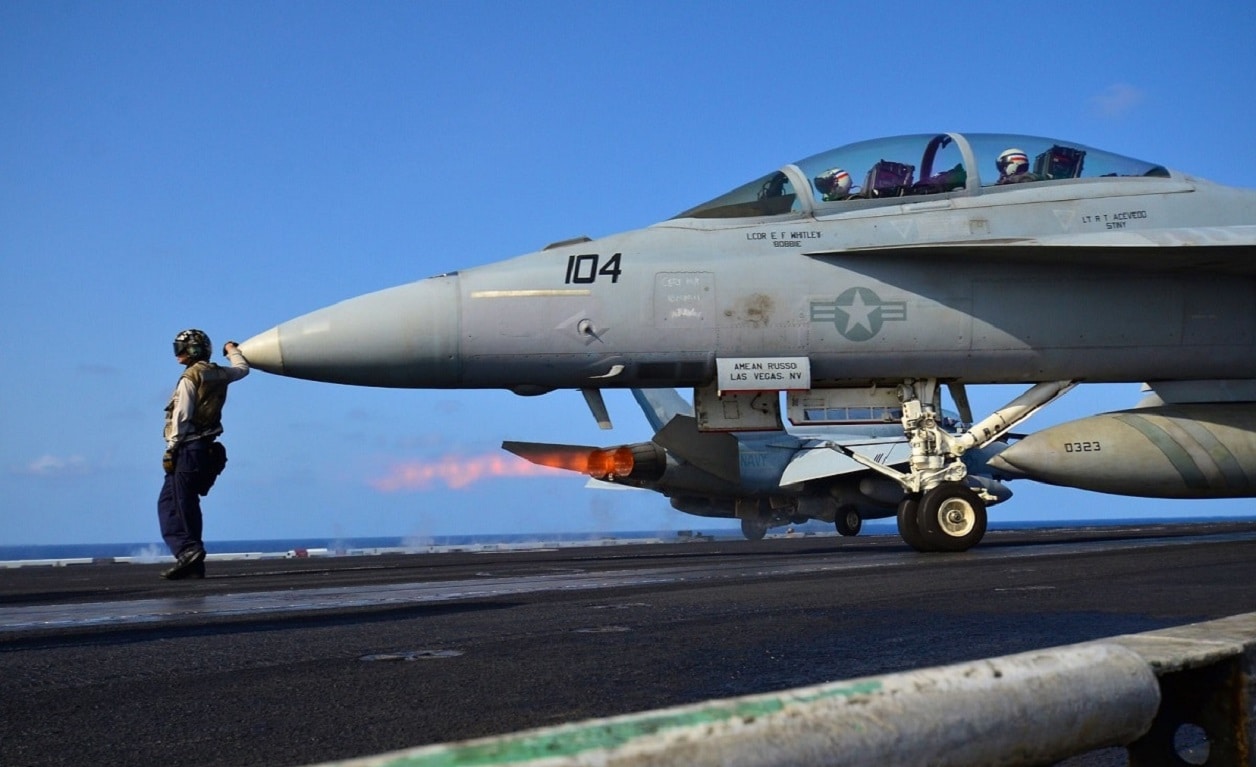 The U.S. Navy began taking delivery on the first Block III F/A-18 Super Hornets for testing last year, and while the jet may look strikingly similar to its predecessor on the outside, a peek inside the cockpit shows just how much this fighter has changed.

The new Block III Super Hornet promises to be as significant a jump in capability as the earlier transition from the Block I Hornet to Block II Super Hornet in the early 2000s. As a result, the new F/A-18 Super Hornet (called the Super “Duper” Hornet by some) will join the Air Force’s new F-15EX Eagle II in serving as among the world’s most advanced non-stealth fighters in operation today. In all, the U.S. Navy intends to purchase some 78 all-new Block III Super Hornets, while also upgrading its existing fleet of 550 or so jets to match.

From Hornet to Super Hornet

Originally designed and built by McDonnell Douglas, the first F/A-18 Hornet took to the skies in 1978 and made its way into service as the U.S. Navy’s go-to carrier fighter in 1984. The Hornet design was intended to serve as a replacement for a variety of carrier aircraft, including the A-4 Skyhawk and F-4 Phantom IIs, while complimenting the dogfighting dynamo of the era, the famed F-14 Tomcat. The Hornet’s broad capability set and impressive performance made it a standout platform for both the Navy and Marine Corps, thanks in no small part to its multi-role focus. Indeed, it’s F/A prefix is indicative of this multi-role skillset, with F standing for Fighter and A standing for Attack.

By 1992, the U.S. Navy was ready to double down on the Hornet, but in order to keep up with the changing times, the aircraft needed a significant facelift. In truth, this new Super Hornet was a largely new aircraft that simply carried over the F/A-18 designation, in part, to convince Congress that the program was a cost-effective derivative effort, rather than a pricey clean-sheet design.

The change from Hornet to Super Hornet, which are also known as the Block I and Block II orders of this aircraft, was dramatic. The Block II Super Hornet, sometimes called the Rhino by pilots, is larger than its predecessor and has some standout design cues that you may not notice at first pass, but become hard to ignore once you’re familiar with these two fighters.

Those changes granted the Super Hornet 33% more internal fuel storage and 15,000 more pounds in maximum weight, allowing for a 41% increase in operational range. The changes inside the cockpit were dramatic too. The old physical keyboard was swapped out in favor of a touchscreen display, as well as the addition of an Engine Fuel Display (EFD) and Reference Standby Display (RSD). Those displays and others throughout the cockpit also went to full color, instead of the previous monochrome.

Other avionics tucked inside the fuselage were upgraded, including onboard radar (the Super Hornet was equipped with a APG-79 radar system that could keep track of more enemy aircraft and spot them from much further distances). In order to support this improved air-to-air capability, additional weapons stations for weapons like the AIM-120 were added, alongside improved radar warning receivers, a ALQ-214 jammer, and more chaff and flares than the Hornet could manage.

The legacy Hornet was still a capable fighter, however, and Marine Hornets remained aboard America’s flattops all the way until February of this year.

The Block III Hornet is flying straight into the 21st century

Last June, the U.S. Navy accepted delivery of its first two Block III Super Hornets for testing; a single-seat E-model and a two-seat F model. Both iterations of the new fighter have undergone significant upgrades and design changes over the Block II version of the jet, broken up into five major design features.

The Super Hornet cockpit has undergone a serious overhaul for Block III, incorporating a single touchscreen design in place of a litany of gauges and readouts.

“The advanced cockpit system (ACS) takes the legacy displays of the Block II and puts them all into one big touchscreen piece of glass that’s almost like an iPad interface for the pilot,” Jennifer Tebo, Boeing director of development for F/A-18 and EA-18G programs, explained.

The intent behind the streamlining of these screens isn’t to reduce the data available to pilots, but rather, to help manage it more effectively. Fighter pilots have to glean information from multiple screens and the world around them and then fuse it all together in their heads to develop a well-rounded concept of the battlespace they’re in. While flying supercomputers like the F-35 makes this process even easier for pilots, the Block III Super Hornet promises to bridge the gap between fourth-generation jets like the Super Hornet and computing powerhouses like the F-35.

“It’s customizable and expandable and you can set it to how you want your displays to show up every time you jump in the cockpit. I’m left-handed so I like my keypad on the left side with fuel and engine information on the right,” an unnamed Navy test pilot told Forbes last year.

One of the most pressing issues facing the U.S. Navy in the 21st century is the lack of fuel range in its carrier-based fighters. Neither the existing Block II Super Hornet nor the advanced F-35C Joint Strike Fighter have the range they’d need to engage Chinese targets without placing their carriers in direct range of China’s hypersonic anti-ship missiles. As such, a slew of efforts are underway to pull more range out of these aircraft, including the development of the MQ-25 Stingray refueling drone for use on America’s flattops.

But in order to address this problem on the aircraft itself, the Block III Super Hornet includes the addition of conformal fuel tanks that add 3,500 pounds of fuel. These additional tanks are called “conformal” because they hug the fuselage of the fighter, limiting added drag. While this won’t be enough to offset the capability gap created by China’s anti-ship missiles, it is an important step in the right direction.

Earlier this year, Aviation Week reported that “technical, structural, and sustainment” issues had risen the anticipated cost of incorporating these conformal fuel tanks, placing their future in jeopardy. However, with the Navy concerned about the range of its existing fighters, it stands to reason that the service will find a way to work out these issues.

The Block III Super Hornet is leaning into the future of data with its Distributed Targeting Processor-Networked (DTP-N) mission computer and its Tactical Targeting Network Technology (TTNT) data link. The DTP-N is 17 times more powerful than the existing mission computer aboard the Super Hornet, but more importantly, utilizes an open architecture that will allow for software to be changed or updated without having to actually replace any of the aircraft’s hardware.

All of that computer power will support the rest of the force in the area, not unlike the “quarterback in the sky” F-35 Joint Strike Fighter, thanks to that TTNT data link.

According to Tebo, the TTNT “will allow all of the information to come into the jet from the battlespace that we need to be processed for decision making as well as pushing it back out to the rest of the air wing so that we can share common pictures of data and get better situational awareness,”

Advanced as these systems are, they are not on par with the F-35’s onboard systems, nor are they compatible, so the Block III Super Hornet will be forced to communicate with F-35s via the longstanding Link-16 tactical data link system.

Tougher to spot on radar

The F/A-18 was never designed to be a stealth fighter, and despite an improved radar cross-section, the Block III Super Hornet isn’t either. However, making it tougher to manage a weapons-grade lock on the new fighter has been a focus among Boeing designers, and although much of what has been done in this effort has been kept secret, reports indicate a serious improvement in minimizing detectability.

The Block III Super Hornet’s reduced radar cross-section won’t make it a “stealth” fighter, but like other less-than-perfect stealth jets, the intent may not be to completely evade detection, so much as delay engagement. Enemy fighters and surface-to-air missile platforms may be able to spot the Block III Super Hornet, but the goal is to impede securing a weapon’s grade lock to buy the aircraft time to escape or evade.

The Block II Super Hornets in operation for the U.S. Navy today are each rated for 6,000 flight hours, so it goes without saying that the past two straight decades of combat operations in the Middle East and elsewhere have wrought havoc on maintenance schedules and aircraft availability. In another one of those significant changes that are tough to spot with the naked eye, the Block III Super Hornet is rated for an additional 4,000 hours, bringing the total up to 10,000.

This longer lifespan will make the new Block III Super Hornet a most cost-effective means of delivering air power than ever before, while also offering the Navy itself greater latitude in logistical planning.

Technically not considered a “Block III” improvement, the addition of a centerline tank-mounted infrared search track system (IRST) in the Block III Super Hornet has been called “integral” for the capability of the fighter by Boeing officials.

This passive detection capability is aimed squarely at fifth-generation competitors like Russia’s Sukhoi Su-57 or China’s Chengdu J-20. The IRST can be used to scan the horizon for radar-beating fighters, picking up on the infrared heat released by their jet engines without broadcasting a signal through space to tell others you’re on the hunt. This will give the non-stealth Block III Super Hornet a real fighting chance against stealthy jets, potentially spotting them against the sky backdrop from a hundred miles away.