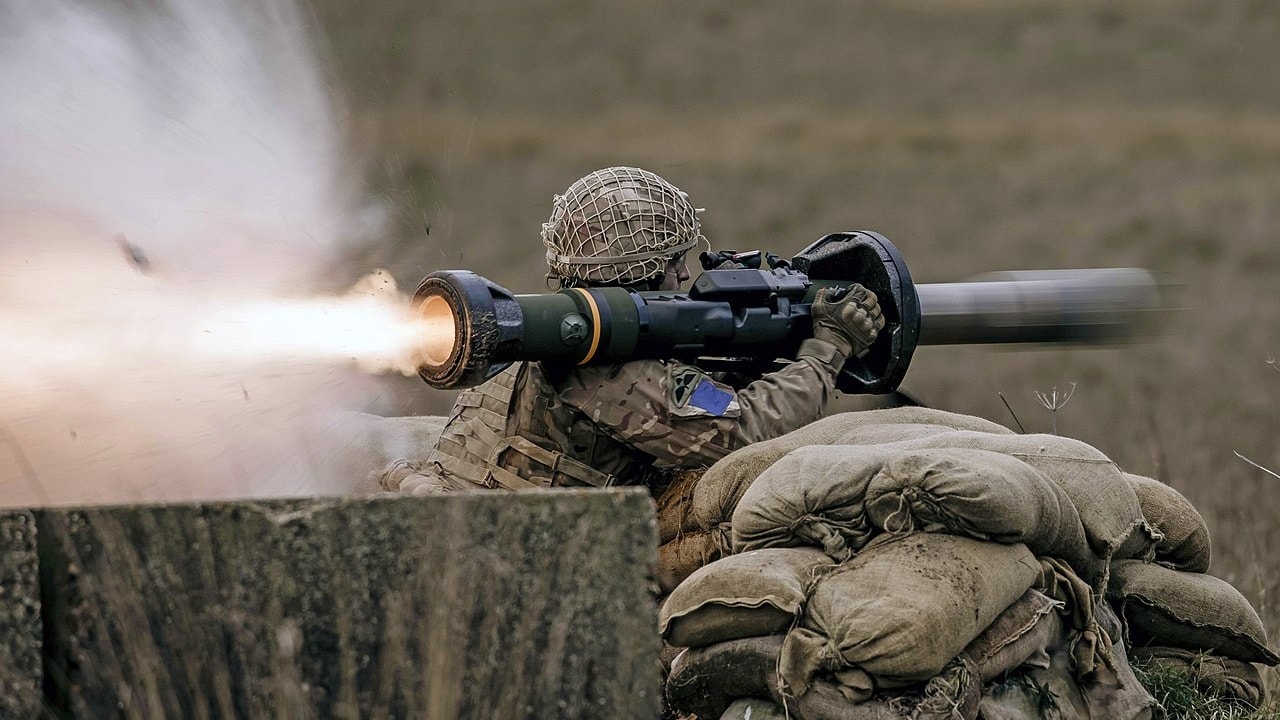 A member of 2nd Battalion, The Parachute Regiment fires a Next-generation Light Anti-tank Weapon (NLAW)...Paratroopers have demonstrated the firepower that they could bring to bear during combat missions as the British Army’s global response force. ..As the culmination of a course in support weapons skills, paratroopers staged a firepower demonstration on Salisbury Plain. ..The Next-generation Light Anti-tank Weapon (NLAW) is the first, non-expert, short-range, anti-tank missile that rapidly knocks out any main battle tank in just one shot by striking it from above...NLAW utilises predicted line of sight guidance and has overfly top and direct attack modes, and it is easy to use, making it a valuable tank destroyer for light forces that operate dismounted in all environments, including built up areas...It also has night vision capability and is designed for all climate conditions and environments..

What is the PLOS Guidance System Used by NLAW Missiles? – Saab’s NLAW anti-tank systems have proven a popular weapon among Ukrainian fighters, having already been used in several high-profile attacks against Russian military vehicles and ships.

These next-generation light anti-tank weapons, designed to be used by a single infantryman and fired from over the shoulder, use an advanced guidance system designed to make it as easy as possible to hit specific targets.

Using a combination of advanced hardware and software, Saab developed a system that requires a single troop to point the missile launcher at a moving target, focus on that target for just a handful of seconds, and deploy the weapon.

The Predicted Line of Sight system is not available on most light anti-tank systems designed to be used by a single infantryman, but the NLAW makes it simple. An operator simply holds the missile launcher on their shoulder and uses the built-in sight to focus on a target.

The operator can initiate the PLOS guidance and track a moving target in their 2.5x magnification sight. Once the target has been tracked for anywhere between three and five seconds, the operator can launch the missile.

A chamber of pressurized gas launches the missile without an explosion, firing it into the air where it then ignites a rocket-powered motor and accelerated to a speed of 220 meters per second. The system means that operators are protected from burns.

Once in the air, the missile focuses on the target that the operator tracked before launch. It uses its own hardware and software to track the target. An algorithm predicts where the target will be based on the movement seen during the initial 3-5 seconds of tracking.

The PLOS guidance system has already proven highly effective in combat for Ukrainian troops fighting Russians. It also allows operators to target armored vehicles from above, or use the direct attack mode to strike targets from the side.

Despite losing more than 460 tanks since the beginning of the invasion, along with 2,741 armored vehicles, Russia claims that the anti-tank missiles used by Ukrainian forces aren’t working.

Russia’s state-owned TASS news agency claimed that both the NLAW and Javelin missile systems aren’t performing as well as hoped.

“The much-touted Javelin and NLAW man-portable anti-tank missile systems supplied by NATO countries to Ukraine have performed poorly on the battlefield and created numerous setbacks,” TASS reported, citing claims from a Ukrainian soldier captured by the Russians.

The prisoner claimed that NLAWs were failing to prove their worth, that soldiers suffered setbacks, and that “some weapons had storage batteries with an expired service life while most batches indicated years past expiration dates.”

Meanwhile, Russia is struggling to resupply its troops with precision-guided missiles and relies heavily on so-called “dumb” bombs, the British Ministry of Defence confirmed on Monday.